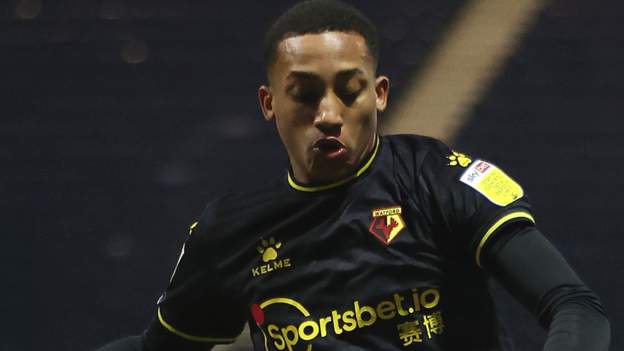 
Promotion-chasing Watford kept up their momentum with a narrow victory at Preston North End in the Championship.

Brazilian forward Joao Pedro netted the only goal from the penalty spot six minutes into the second half after he was tripped by Tom Barkhuizen.

Liam Lindsay headed a corner over the bar and dragged a shot wide as the Lilywhites went looking for an equaliser, but the hosts failed to trouble visiting keeper Daniel Bachmann.

The win lifts Xisco Munoz’s side up to third in the table, three points behind second-placed Brentford.

However, the Bees and fourth-placed Swansea City, who are one point below the Hornets and have three games in hand on the Vicarage Road side, are both in action on Wednesday evening.

Watford won 6-0 against Bristol City on Saturday but their trip to Deepdale proved to be a tight affair which was settled by the game’s only effort on target.

In a first half of few chances, Preston striker Ched Evans shot over the bar from close range and sent another effort wide from a narrow angle inside the opening 20 minutes.

With Hornets talisman Troy Deeney out for a short spell to recover from a couple of niggling injuries, penalty duties fell to Pedro early in the second half after referee Tony Harrington pointed to the spot.

The 19-year-old shot to the left hand side of the goal to score his seventh of the season, despite Preston keeper Daniel Iversen diving the right way.

It was just Watford’s eighth goal in 15 away league games this season and was enough to give them their fourth victory on the road.

Alex Neil’s Preston have now lost three of their past four and remain seven points off the play-offs, having suffered defeat against Watford at home for the first time since 1979.

Meet the Beasts! How Monster Hunter Rise’s Monsters Were Inspired by Japanese Folklore