Soaring over Windsor Castle, this is the Duke of Edinburgh performing his own flypast of the mighty royal fortress.

The photograph shows Philip, then 31, flying solo on the day he was presented with his RAF wings nearly seven decades ago.

He began flying lessons in November 1952 and made his first solo flight in December that year. 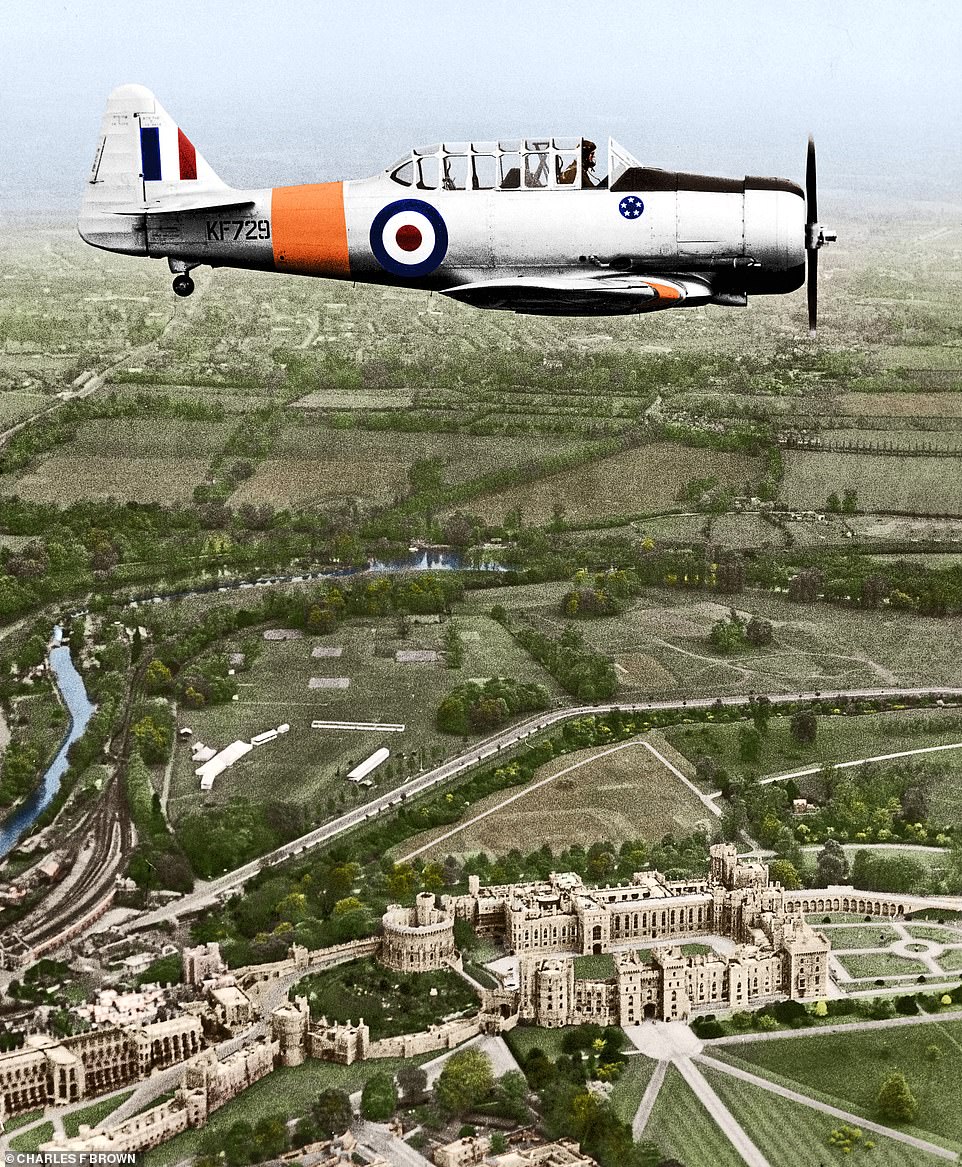 Soaring over Windsor Castle, this is the Duke of Edinburgh performing his own flypast of the mighty royal fortress (pictured)

The photograph of him above Windsor in a Harvard Advanced Trainer, an American aircraft, was taken on May 4, 1953, by his instructor Flight Lieutenant Caryl Ramsay Gordon.

The five stars on the fuselage signified his rank of Marshal of the Royal Air Force, to which he had been appointed that year.

He made three solo circuits and landings at White Waltham airfield in Berkshire, about nine miles from Windsor, that day, which was a month before the Queen’s coronation.

He then returned to Buckingham Palace, where he was awarded his wings by then Chief of the Air Staff Air Chief Marshal Sir William Dickson. 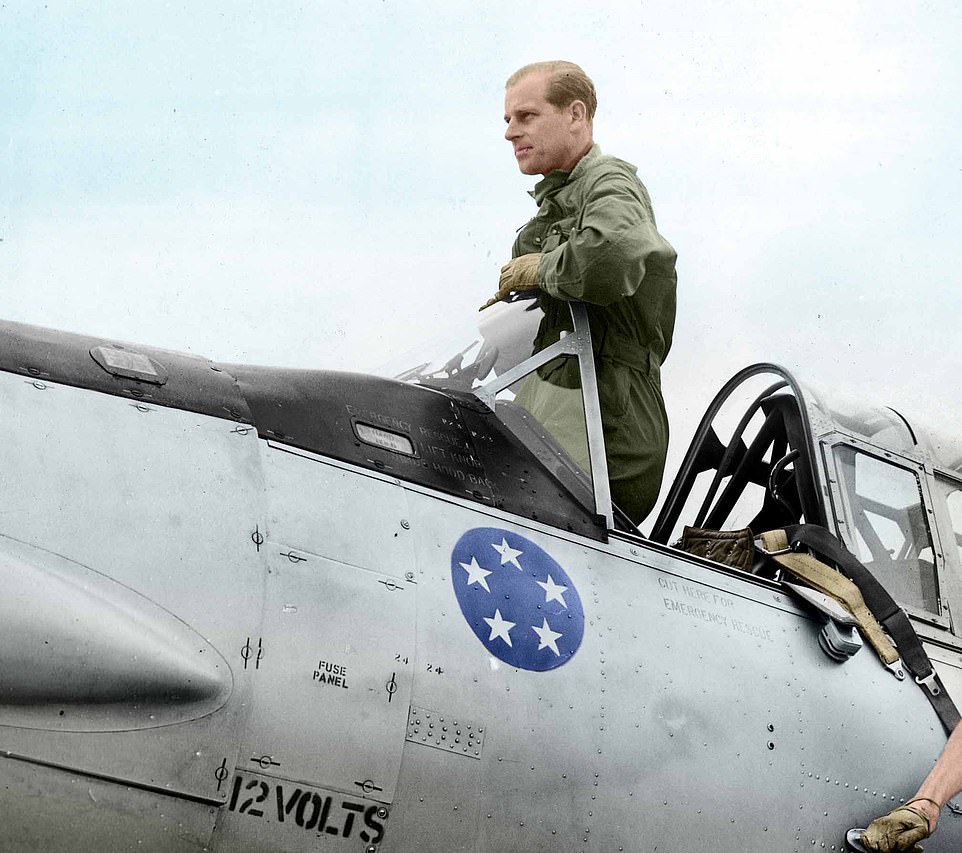 The photograph shows Philip, then 31, flying solo on the day he was presented with his RAF wings nearly seven decades ago. Pictured: Prince Philip in the plan at White Waltham

An RAF examining unit described his flying as ‘thoughtful with a sense of safety and airmanship above average’.

The picture, originally black and white, is retouched in colour here.

It has been shared on the Royal Family’s official Twitter page in its original format with the caption: ‘He gained his RAF wings in 1953, his helicopter wings in 1956 and his private pilot’s licence in 1959.’

‘It’s been a minefield’: Royal aides admit to ‘walking on eggshells’ around feuding princes William and Harry as brothers are ordered apart for funeral

By Rebecca English, Royal Editor for the Daily Mail

Royal aides are ‘walking on eggshells’ as they try to navigate the rift between William and Harry, sources say.

It emerged on Thursday that the princes would not stand shoulder to shoulder behind their grandfather’s coffin. Instead, they will be either side of their cousin, Peter Phillips.

Insiders stressed that the arrangement should not be taken as a sign that the brothers refused to walk alongside each other.

A Buckingham Palace spokesman said: ‘This is a funeral… we will not be drawn into those perceptions of drama. The arrangements have been agreed and they reflect Her Majesty’s wishes.’

Sources did admit, however, that the fraternal feud has taken up ‘much thought and energy’ in the Lord Chamberlain’s Office, which is responsible for today’s arrangements. 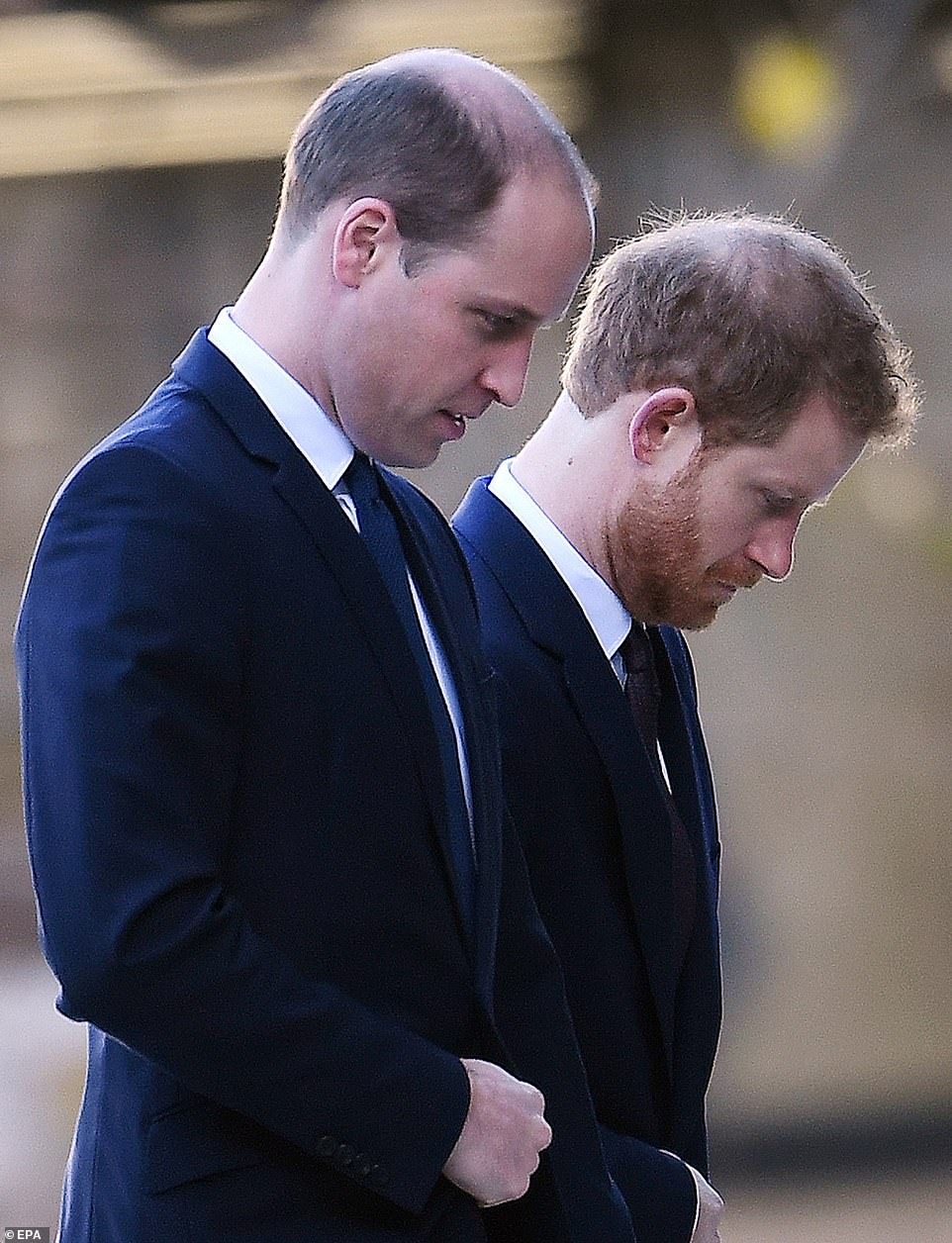 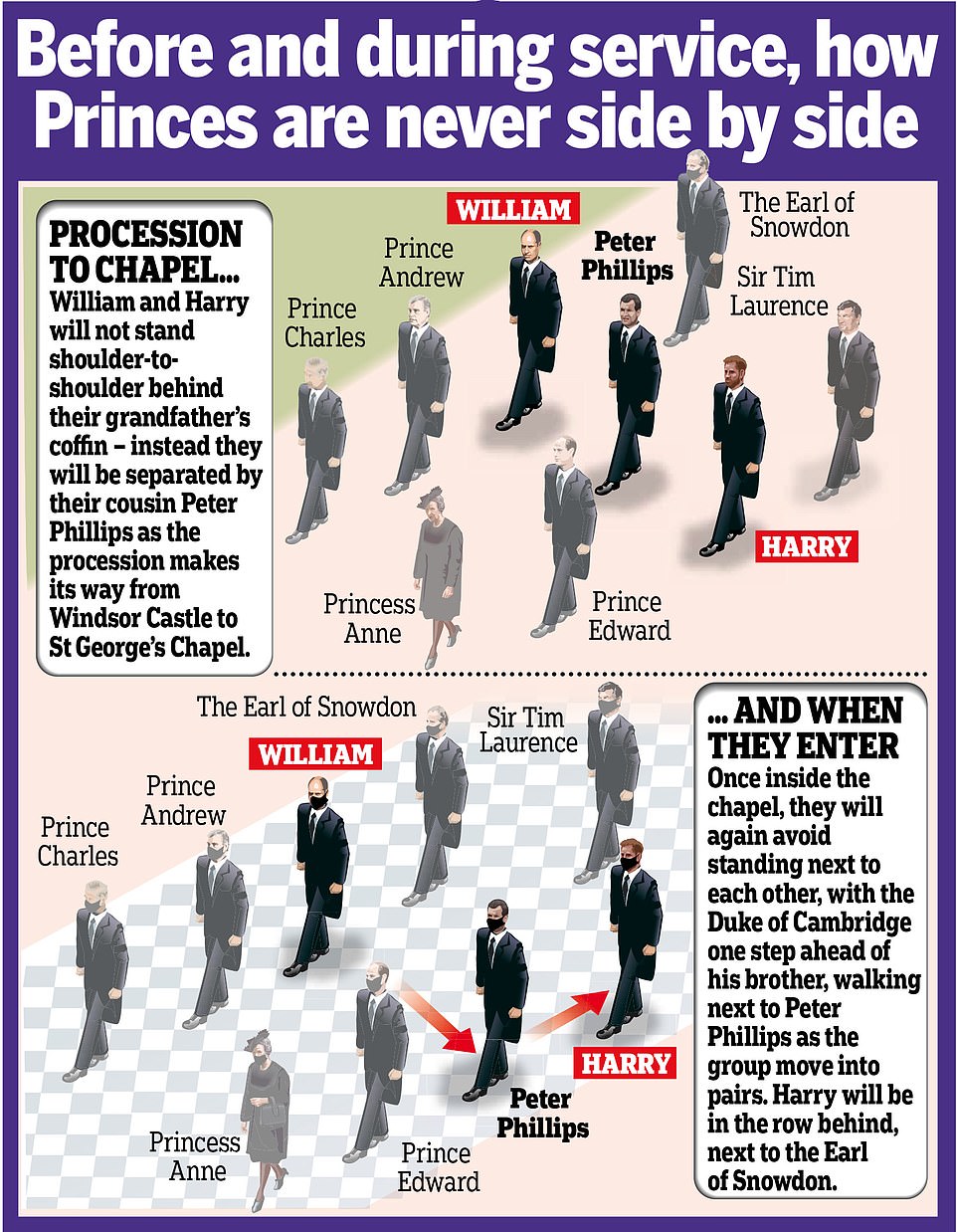 Police step up presence in Windsor

Though the funeral will be a scaled-back affair with just 30 mourners, police will take no chances protecting the senior royals in attendance.

There have been increased patrols from armed officers and mounted police in the area, while specialist teams and sniffer dogs searched phone boxes, bins and drains.

Increased checks will be carried out using automatic number plate recognition technology, which flags any suspicious cars that can be stopped and searched.

Checks on heavy vehicles are also being carried out, including inspection of the loads and the drivers’ licences.

Anti-terror hostile vehicle mitigation barriers designed to thwart threats similar to the London Bridge terror attack of 2017 are permanently installed around the town.

The public has been warned to keep away from the event and a ring of steel will form around Windsor Castle today. Thames Valley officers will be joined by the elite SO14 Royalty Protection Group arm of the Met Police.

Each senior royal has their own personal protection officers, who in turn will have contingency capacity nearby. It is also understood that undercover police will patrol the streets near the castle.

Former head of Royalty Protection Dai Davies said: ‘The Royal Household and the Metropolitan Police have a lot of experience in planning these things and you need to prepare for every eventuality.’

‘Everyone is walking on eggshells so as not to exacerbate the situation,’ said one.

‘To be fair, both William and Harry have made clear that they wish to focus on mourning their grandfather and do not want anything to get in the way of that.

‘But it has made everyone doubly nervous about saying anything that could be remotely construed of being critical of the other side. It’s been a minefield.’

Sources insist the formation of those walking behind the coffin was based on ‘bloodlines and age’.

The group will be led by the duke’s two elder children, with the Prince of Wales, 72, on the right and the Princess Royal, 70, on the left.

Philip’s three adult grandsons are next, with William, 38, on the ‘elder brother’ column behind Charles and Andrew, while Harry, 36, will be behind Anne and Edward.

Between them will be Anne’s son Peter, 43. Although he is older than William, he is not a direct heir to the throne.

Vice Admiral Sir Tim Laurence and the Earl of Snowdon will follow behind the trio, with Philip’s staff bringing up the rear.

Tensions within the family have already seen the Queen change the dress code for the occasion.

This spares Harry from being the only member of the family not in matching dress, as he was stripped of his military titles after quitting as a front-line royal.

Last night the Duke of Sussex was finishing his Covid quarantine after flying in from the US. His pregnant wife Meghan and baby son Archie did not travel.

The funeral will be the first time Harry has seen William – or the rest of his family – for more than a year. 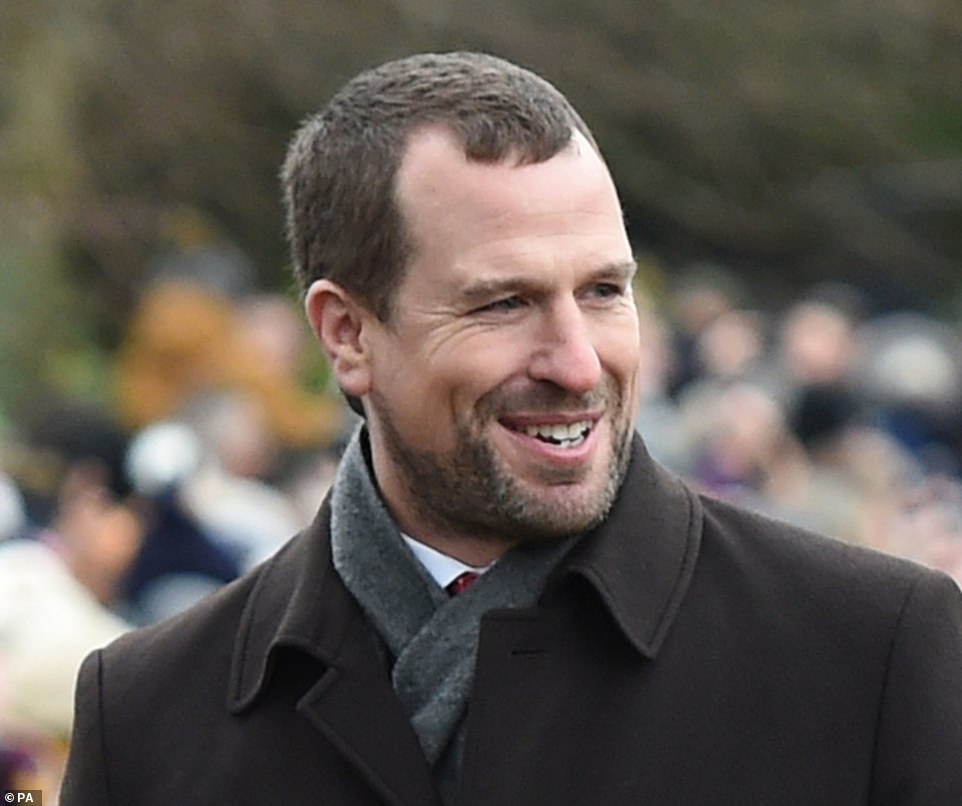 Between them will be Anne’s son Peter, 43. Although he is older than William, he is not a direct heir to the throne 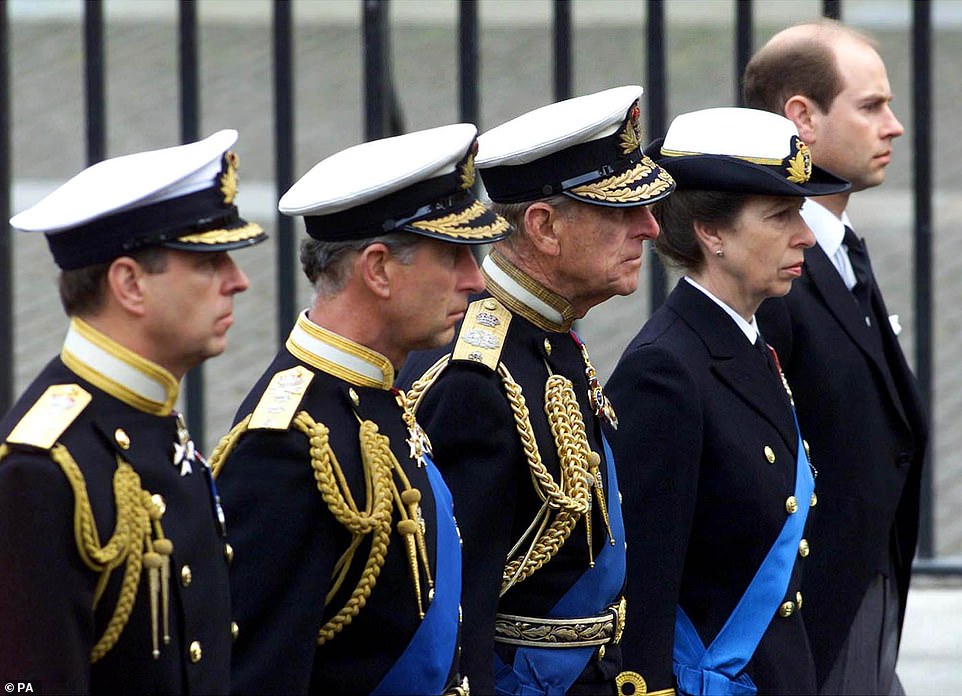 The group will be led by the duke’s two elder children, with the Prince of Wales, 72, on the right and the Princess Royal, 70, on the left. Pictured: The royals will not wear military uniform – as they were seen here in 2002