Putin accuses West of using ‘terror’, urges prosecutors to be tough By Reuters 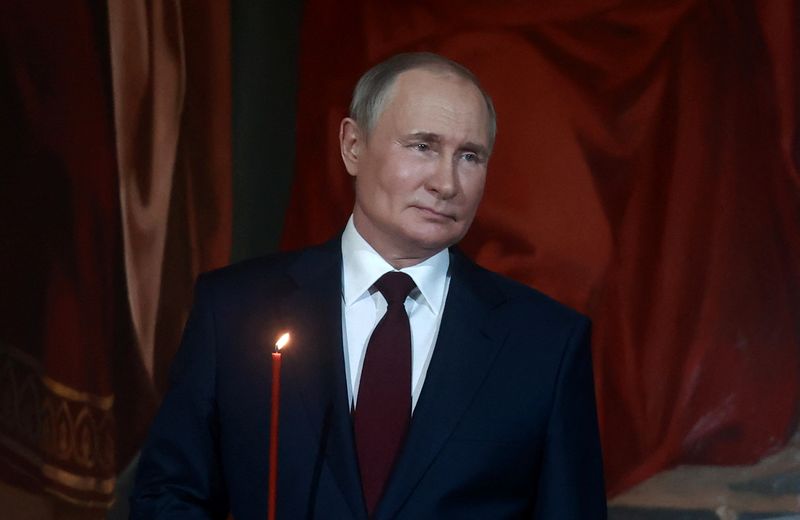 ©Reuters. Russian President Vladimir Putin during a religious service for Orthodox Easter at the Cathedral of Christ the Savior in Moscow, Russia, on April 23, 2022. Sputnik/Sergei Fadeichev/Pool via REUTERS

LONDON, April 25 (Reuters) – Russian President Vladimir Putin on Monday accused the West of trying to destroy Russia, demanding prosecutors take a tough line on what he sees as plots hatched by foreign spies to divide the country and discredit their armed forces.

In a speech delivered before the country’s top prosecutors and under the watchful eye of his defense minister, Putin accused the West of promoting attacks on Russian journalists.

“They have turned to terror: to preparing the murder of our journalists,” Putin said, referring to the West.

Solovyev is one of Russia’s most prominent television and radio journalists, and the host of talk shows whose guests often denigrate Ukraine and justify Moscow’s actions in that country.

Putin, a former KGB spy who has ruled Russia as supreme leader since the last day of 1999, did not immediately provide evidence to back up his claims and Reuters could not immediately verify the allegations.

Putin said that the West has realized that Ukraine cannot beat Russia in war, so it has turned to a different plan: the destruction of Russia itself.

“Another task has arisen: to divide Russian society and destroy Russia from within,” Putin said. “Is not working”.

Putin also said that foreign media and social networks had been used by Western spies to plot provocations against Russia’s armed forces.

“They are usually organized mainly from abroad, organized in different ways – the information or the money comes from there,” Putin said. Prosecutors should fight extremism “more actively,” Putin said.

Just days after ordering the invasion of Ukraine, Putin signed a law imposing jail terms of up to 15 years for intentionally spreading “fake” news about the Russian military.

Russia says the Western media has provided an overly one-sided narrative of the war in Ukraine that largely ignores Moscow’s concerns about NATO enlargement and what it says is persecution of the Russian-speaking population in Ukraine.

Ukraine, which denies discrimination against the Russian-speaking population, did not immediately respond to Putin’s statement.

Russia’s invasion of Ukraine on February 24 has killed thousands of people, displaced millions more and raised fears of a broader confrontation between Russia and the United States, by far the world’s two largest nuclear powers. world.

Putin says what he calls a “special military operation” in Ukraine is necessary because he believes the United States was using Ukraine to threaten Russia, as well as because he claims Ukraine is guilty of genocide of Russian-speakers.

Ukraine says it is fighting a Russian land grab and that Putin’s accusations of genocide are nonsense.

How to identify a toxic relationship? Psychologist explains the case of Johnny Depp and Amber Heard