Russia and China have heaped pressure on Joe Biden with provocative military drills in the Pacific and the South China Sea ahead of the US President’s showdown with Vladimir Putin in Geneva today.

USAF stealth fighters were scrambled to Hawaii on Sunday as Moscow launched its biggest naval exercises in the Pacific since the Cold War, while in the South China Sea, an American carrier group has steamed in as Chinese warplanes tear around Taiwan.

Biden will finally sit down with Putin on Wednesday for their first presidential summit on Lake Geneva – the choice of venue harking back to the Cold War meeting between Ronald Reagan and Soviet leader Mikhail Gorbachev in 1985.

Relations between the two sides are similarly cool – at their lowest ebb in decades after Putin’s outlandish cyber attacks against the US, aggression towards Ukraine, poisoning of Alexei Navalny and intervention in the Middle East.

The two men are set to meet at the Villa de la Grange, a building with a long history that is located near the luxury hotel where Biden is staying. With its stocked Empire bookcases, Trompe l’oeil ceiling details, and colorful rose garden, the building and grounds offers bountiful opportunities for photo-ops and small talk.

Putin is set to arrive first at the venue, with Biden arriving next in ‘the Beast’, with both men staying in nearby hotels, before they meet separately with Swiss President Guy Parmelin, whose central role will be to break the ice and get things started on a good footing.

Then, the three men will be pictured together, but only Parmelin is scheduled to speak – a move that could at least forestall any early pyrotechnics.

Russia and China are flexing their military might with provocative war games in the Pacific, stepping up the pressure on U.S. President Joe Biden as he meets with G7 allies in the UK and prepares to face Vladimir Putin in Geneva 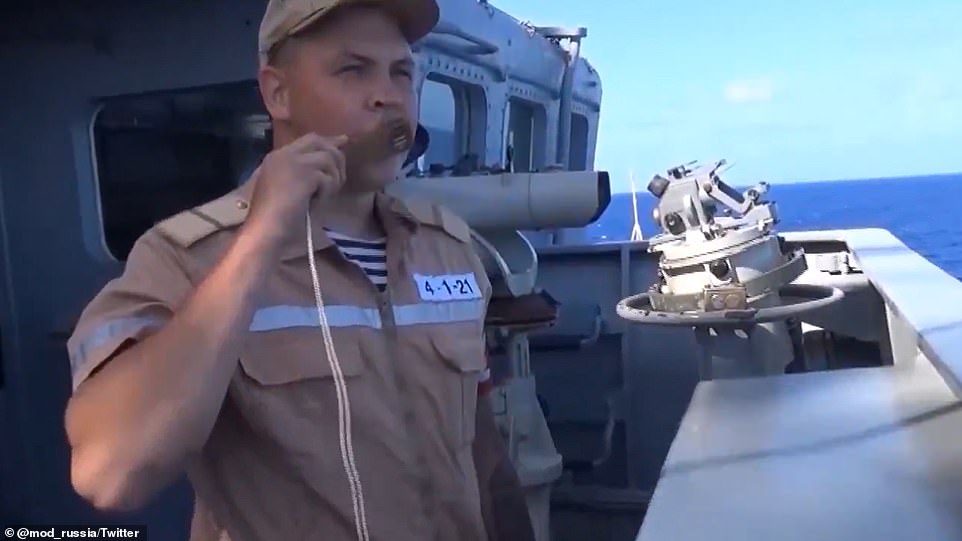 A Russian sailor participates in naval war games in the Pacific in video released by the Russian ministry of defense. Russia’s massive war games, the largest since the Cold War, come as Biden prepares to meet with Putin 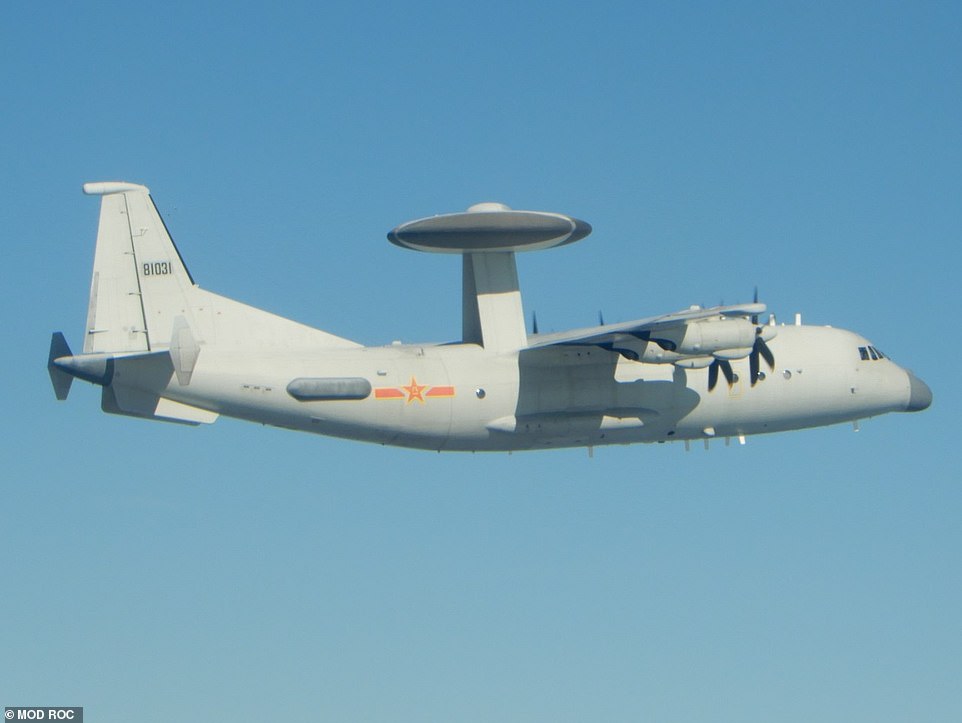 A Chinese Air Police 500 AWACS similar to one that encroached on Taiwan on Tuesday is seen above. Taiwan reported the largest ever incursion into its ADIZ, with 28 warplanes breaching the identification zone 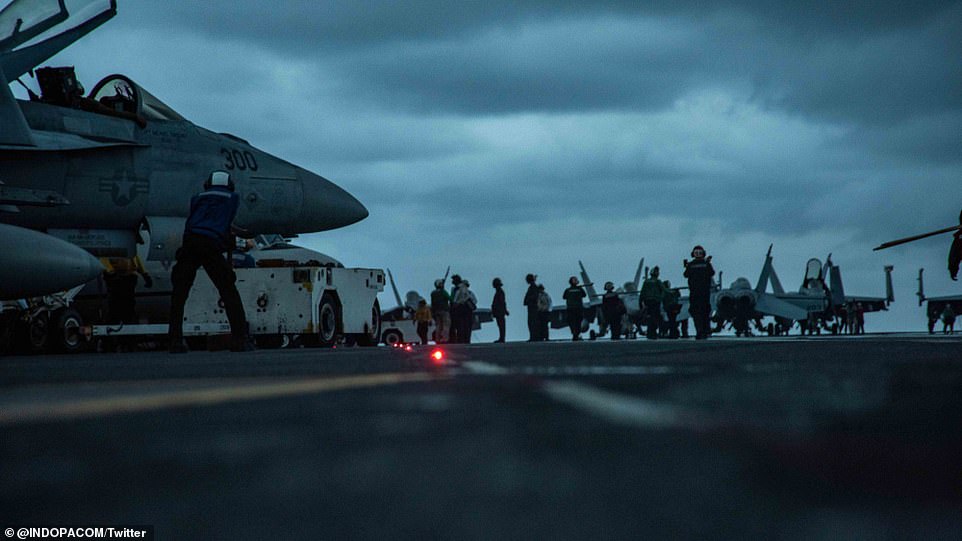 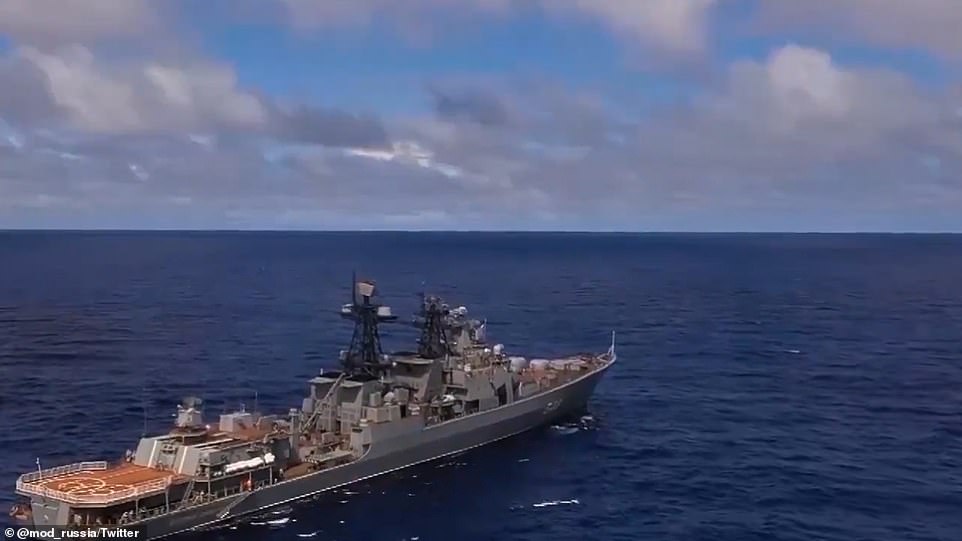 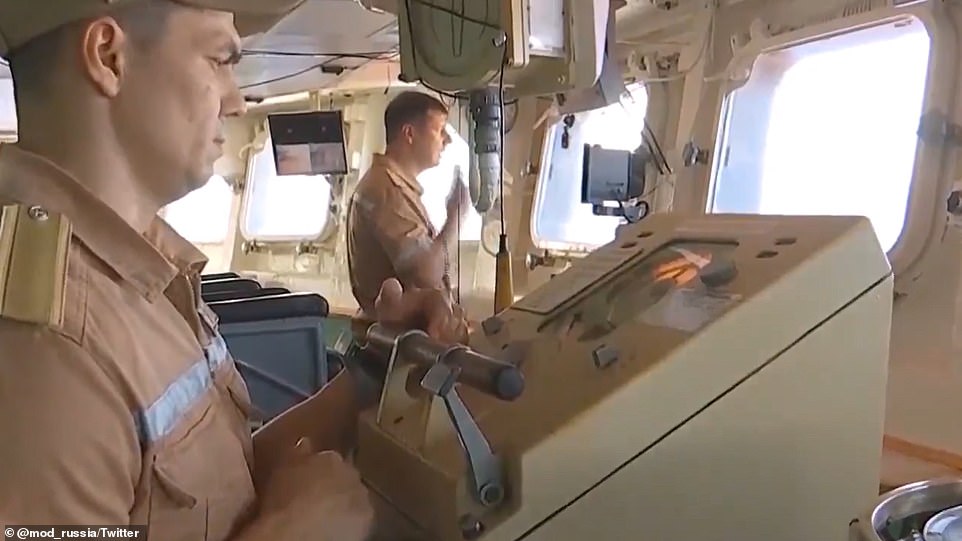 At least 20 ships, submarines, and support vessels, flanked by 20 fighter jets, are taking part in the large-scale war games

But there will be another chance to glimpse the two men together in a small meeting, with only the two leaders, Secretary of State Antony Blinken, Russian foreign minister Sergey Lavrov, and notetakers and translators present.

A larger meeting will have five staff members each – and Biden is set to hold a press conference after the estimated five hours of meetings.

Biden will get to put his spin on the day with a full press conference with the U.S. and international press near the bank of Lake Geneva. But it’s time was not firmly set.

Putin, too, is certain to want to put his spin on events, but hasn’t said how he will do it when, or where.

He has kept up a busy schedule of interviews in the days leading up to the summit.

The relationship has featured intense comments, and Biden agreed with Putin’s assessment that national relations were at a ‘low point.’

Biden says he once told Putin he had ‘no soul.’ He caused an uproar when he agreed Putin was a ‘killer.’

But this week he also called him ‘bright’ and ‘tough,’ as well as a ‘worthy adversary.’

He wants to see if there is a way to at least establish ‘stability and predictability’ in U.S.-Russia relations.

‘We should decide where it’s in our mutual interest, in the interest of the world, to cooperate, and see if we can do that,’ Biden said this week. ‘And the areas where we don’t agree, make it clear what the red lines are.”

Putin said the remark this week by way of contrast with former President Trump, who he met at the infamous Helsinki summit – presenting Trump with a soccer ball and standing alongside Trump while he accepted Putin’s denials of election interference in 2016.

Biden has limited his comments on the issues he would raise. But he and his aides have said he will bring up ransomware, hacking, election interference, Ukraine, press freedoms, opposition leader Alexei Navalny, and human rights.

The Navalny issue is a particularly thorny one. To the U.S. it is a core rule of law issue. Biden wants to send a message to dissidents and other opposition figures, but it is an area where it will be challenging to make progress.

‘Navalny’s death would be another indication of Russia has little or no intention of abiding by basic fundamental human rights. It would be a tragedy,’ Biden said this week when asked what it would mean should he die in prison.

‘We should not lose sight of the fact that Navalny is the most famous of several hundred political prisoners,’ said Matthew Rojansky, director of the Wilson Center’s Kennan Institute in Washington. He said Biden may want to raise the question of Russia’s political prisoners more broadly.

He said the U.S. should hold Putin to international standards and its own commitments as well as Russia’s own constitution. ‘We should try to hold them to those standards. The problem is the regime views these behaviors as essential to its survival. They’re not things we can convince them that they should reverse,’ he noted.’

If Biden didn’t already know it, he should be prepared for Putin trying to turn the tables on him by bringing up domestic U.S. politics. In recent days he has spoken about the prosecution of Capitol rioters while discoursing on Black Lives Matter protests, a go-to tactics when outsiders seek to call attention to stifling of internal dissent or lack of press freedoms.

Biden also must decide how direct he wants to be when he warns Russia about ransomware attacks the U.S. believes come from its soil, even if not government-run operations.

Biden said this week: ‘I’m going to make clear to President Putin that there are areas where we can cooperate if he chooses.

And if he chooses not to cooperate and acts in a way that he has in the past relative to cybersecurity and some other activities, then we will respond. We will respond in kind.’

The U.S. carrier group’s presence in the disputed waters is sure to infuriate Beijing, which claims the entire vast waterway as its own.

Meanwhile 300 miles off Hawaii, Putin has launched the largest naval exercises since the end of the Cold War with at least 20 warships, submarines, and support vessels, flanked by 20 fighter jets.

On Sunday, the U.S. scrambled F-22s from Hawaii in response to Russian bomber flights, but the bombers did not enter the U.S. Air Defense Identification Zone (ADIZ) perimeter and were not intercepted. 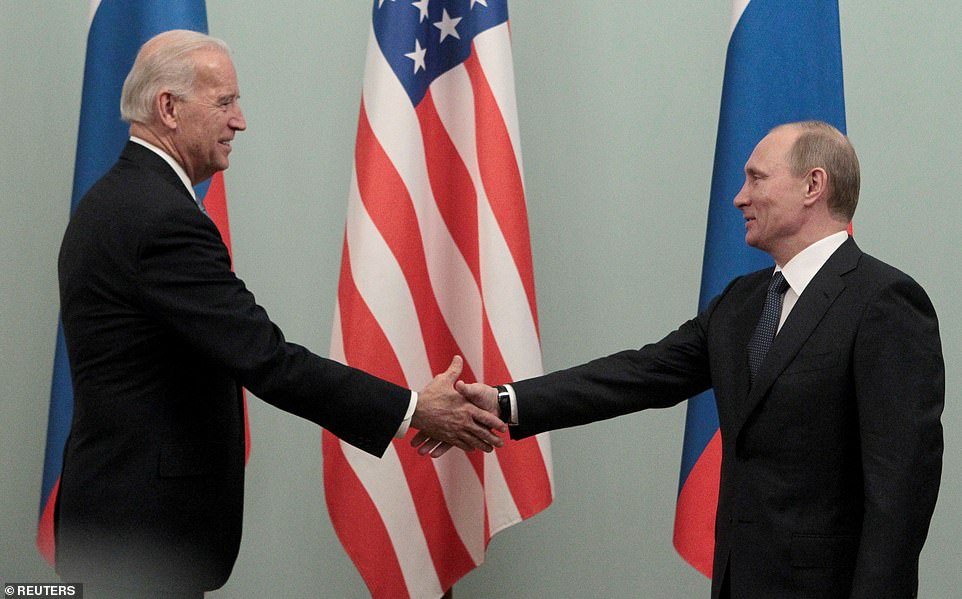 Biden meeting with Putin in March 2011 when he was vice president. The two leaders will meet on Wednesday in Geneva 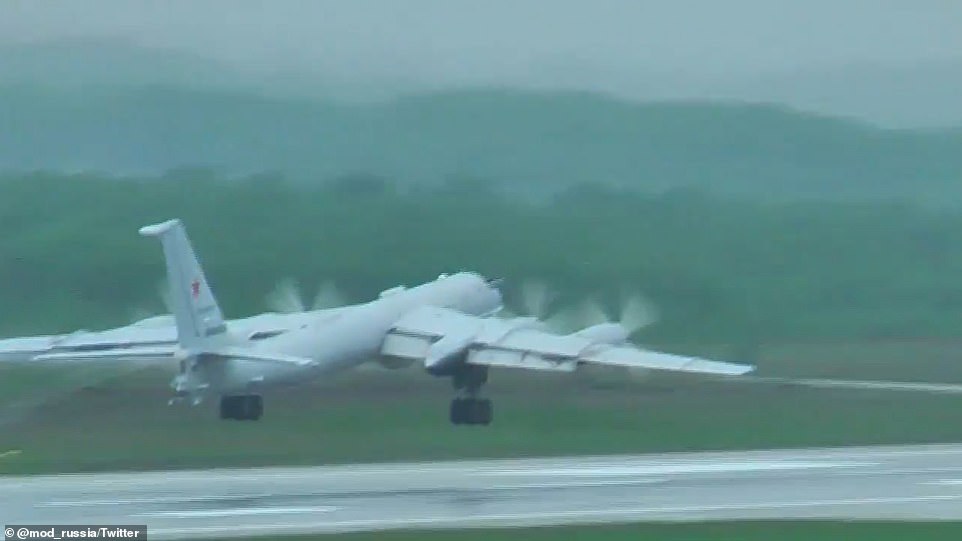 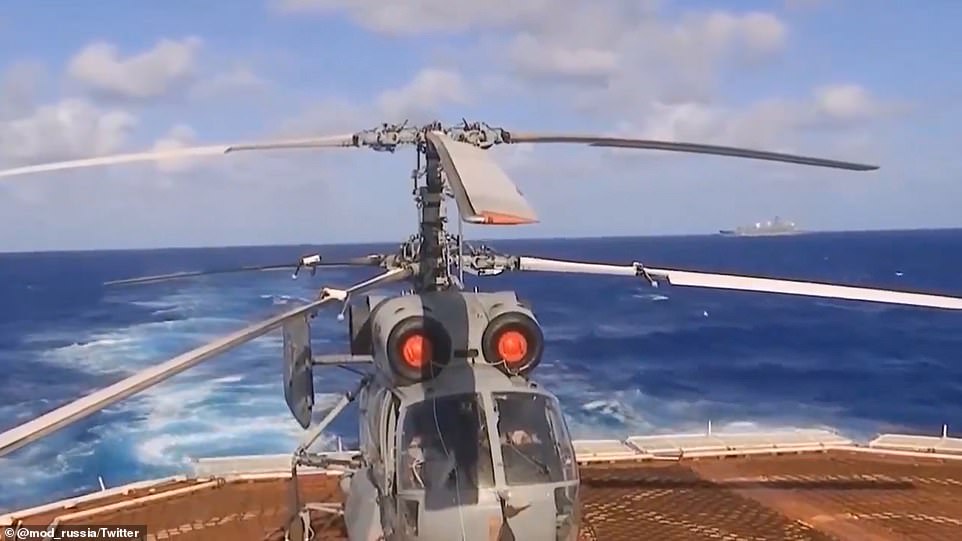 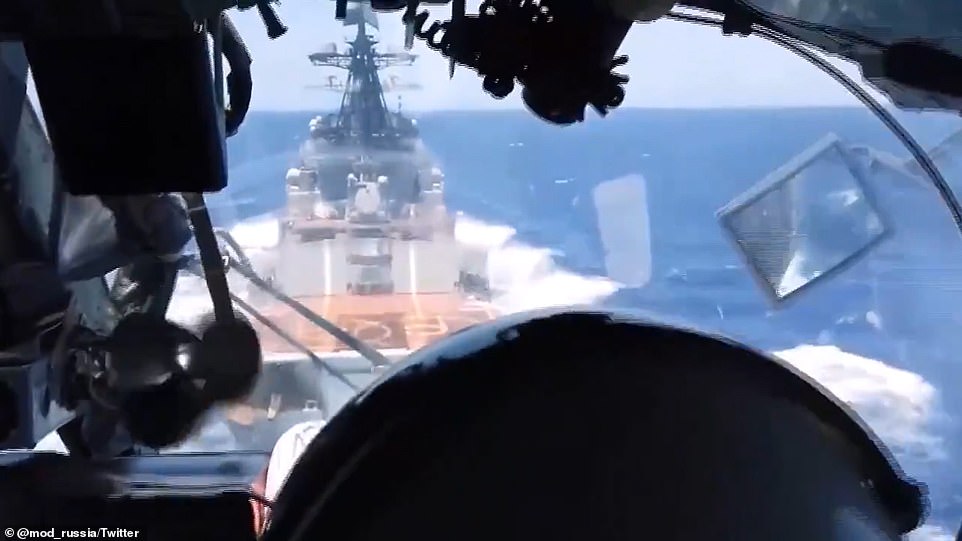 Footage of the mass Russian exercise posted by the Ministry of Defense shows Russian sailors tracking and ‘driving out’ a mock enemy submarine.

‘During the exercise, the crews of the Pacific Fleet’s warships fired from the automatic naval gun mount AK-630 and the universal naval artillery A-190,’ a Moscow defense ministry statement said.

The search and tracking of the mock enemy’s submarines were carried out by the large anti-submarine ship Admiral Panteleev equipped with guided-missile weapons, the frigate Marshal Shaposhnikov and three corvettes, according to Sputnik.

Former chief of the General Staff of the Russian Navy, Admiral Viktor Kravchenko, said: ‘In the post-Soviet period, there have been no comparable exercises involving such a large number of forces.’

Rear Admiral Konstantin Kabantsov termed the drills ‘unique’ due to the large area of the Pacific Ocean where they are taking place and added that ‘such exercises have not been conducted… in the recent history of the Russian fleet.’

Earlier, Moscow also claimed it had intercepted a US reconnaissance plane on its Pacific coast, preventing it from approaching the Russian state border.

Video from the cockpit of a Su-35 fighter showed the American RC-135 spy plane, according to reports.

Taiwan reports massive incursion of 28 Chinese warplanes in its ADIZ

Meanwhile, Taiwan has reported the largest incursion ever on its ADIZ by Chinese warplanes.

While there was no immediate comment from Beijing, the news comes after the Group of Seven leaders issued a joint statement on Sunday scolding China for a series of issues.

The G7 underscored the importance of peace and stability across the Taiwan Strait, comments China condemned as ‘slander’. 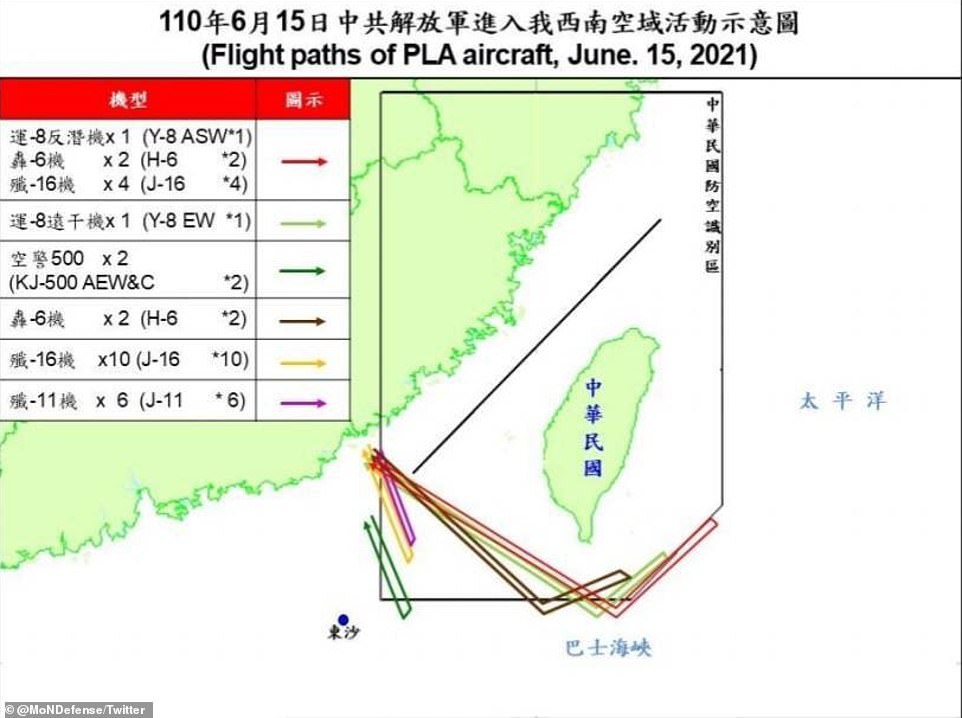 A map shows the routes of 28 Chinese air force aircraft, including fighters and nuclear-capable bombers, entering the Taiwan ADIZ on Tuesday 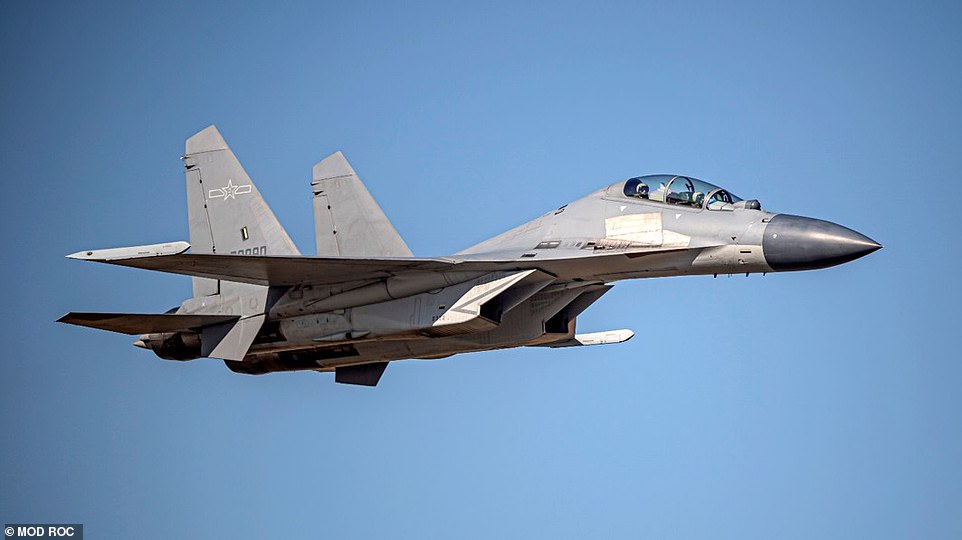 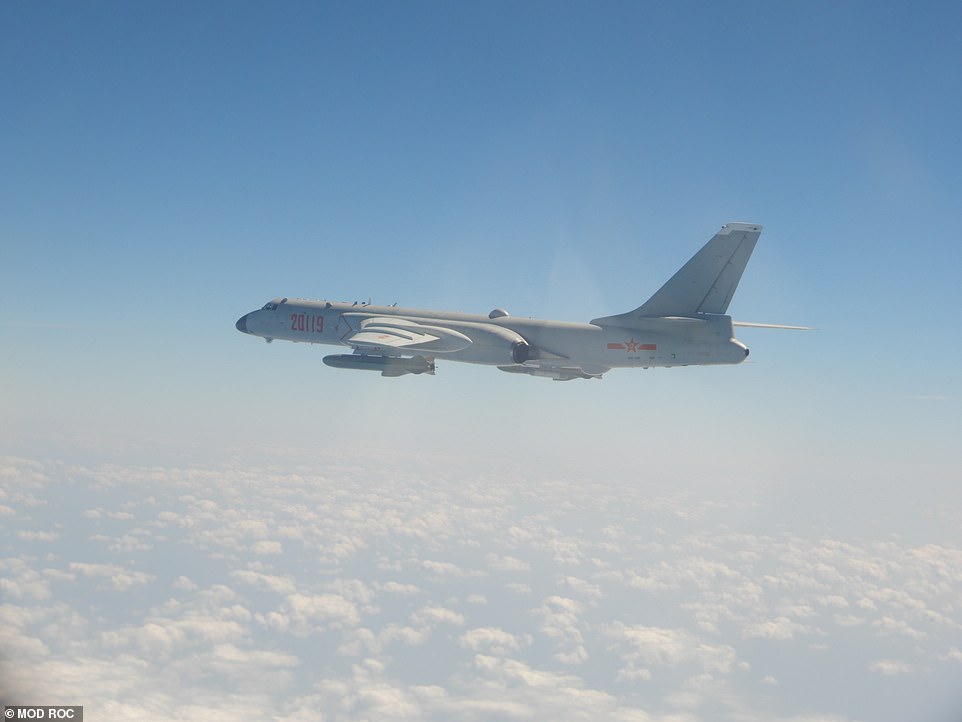 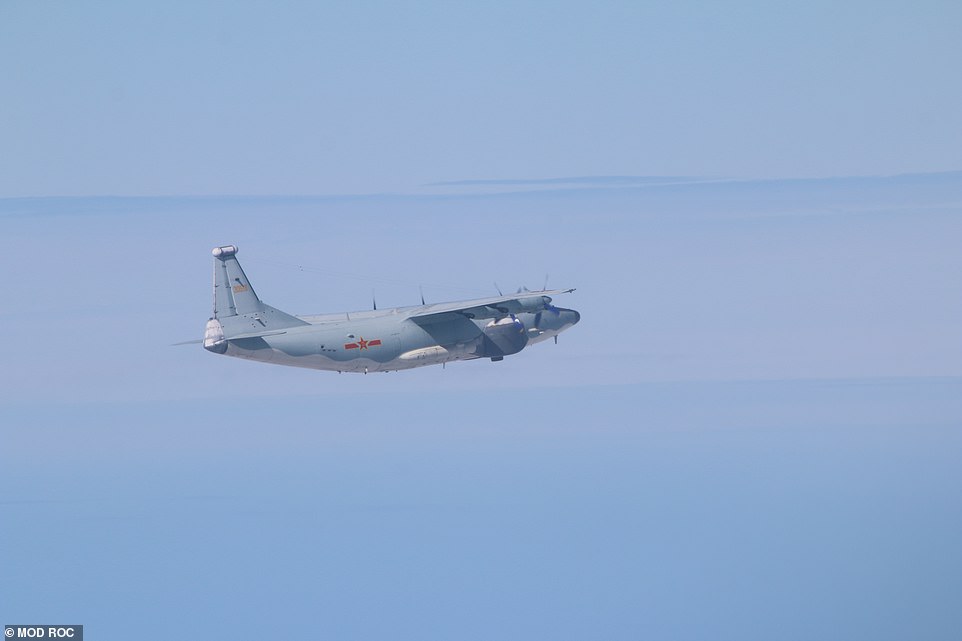 A Shaanxi Y-8 EW patrol aircraft is seen in a file photo. A similar plane joined Tuesday’s incursion on Taiwan

China, which claims Taiwan as its sovereign territory despite decades of separate governing rule, describes the island as its most sensitive territorial issue and a red line the United States should never cross. Beijing has never renounced the possible use of force to ensure eventual unification.

Leaders in Taiwan have complained over the last few months of repeated missions by China’s air force near the island, concentrated in the southwestern part of its air defense zone near the Taiwan-controlled Pratas Islands.

It was the largest daily incursion since the ministry began regularly reporting Chinese Air Force activities in Taiwan’s ADIZ last year, breaking the previous record of 25 aircraft reported on April 12.

The ministry added that Taiwanese combat aircraft were dispatched to intercept and warn away the Chinese aircraft, while missile systems were also deployed to monitor them.

Not only did the Chinese aircraft fly in an area close to the Pratas Islands, but the bombers and some of the fighters flew around the southern part of Taiwan close to the bottom tip of the island, according to a map the ministry provided. 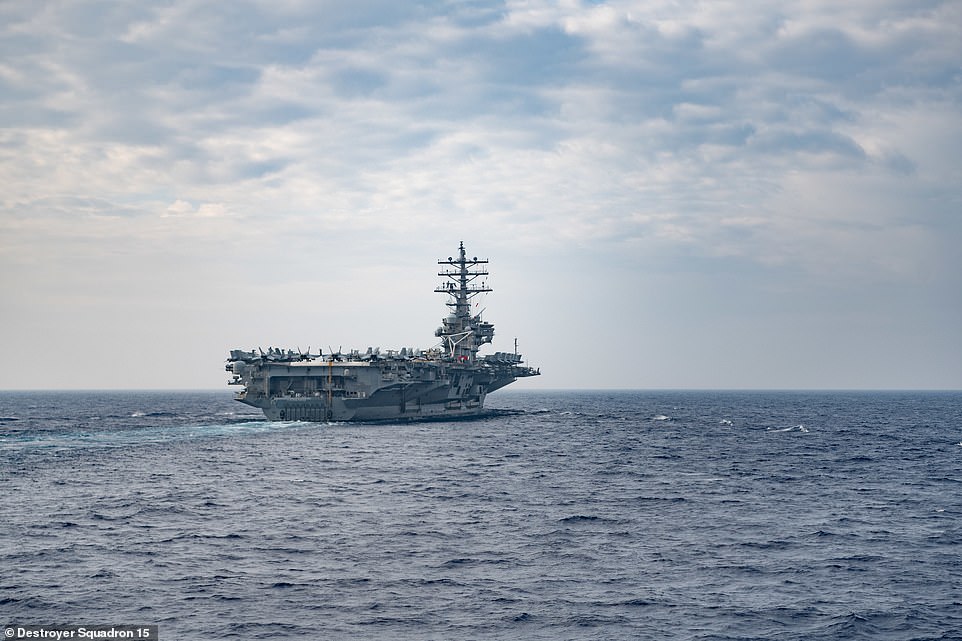 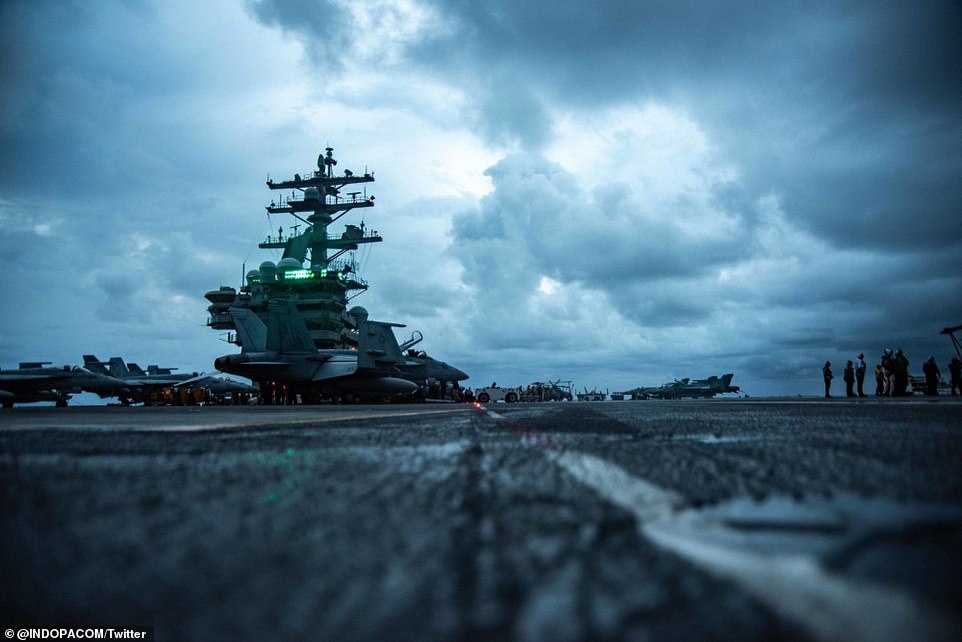 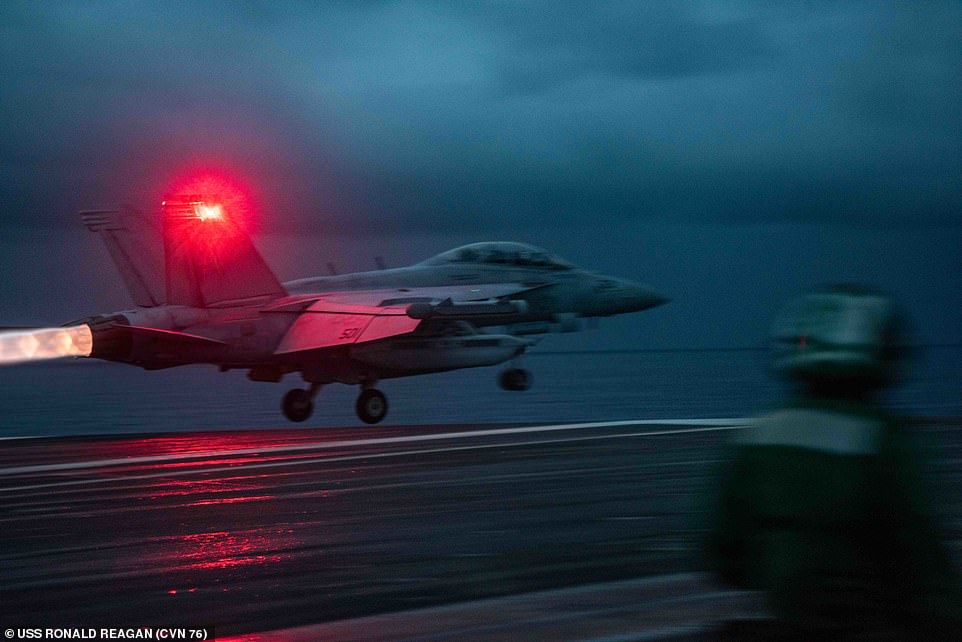 China’s Defense Ministry did not respond to a request for comment.

China has in the past described such missions as necessary to protect the country’s sovereignty and deal with ‘collusion’ between Taipei and Washington.

The United States, which like most countries has no formal diplomatic ties with Taiwan, has watched the island’s rising tensions with Beijing with alarm.

‘In response to the growing PRC threat, we will continue deepening our unofficial security relationship to ensure Taiwan has sufficient capabilities to defend itself,’ a senior U.S. administration official told Reuters, referring to the People’s Republic of China.

A Pentagon spokesperson added that China’s ‘increasing military activities conducted in the vicinity of Taiwan are destabilizing and increase the risk of miscalculation.’