The Manchester United forward, who has been a strong campaigner on the issue, lashed out on Twitter as a motion to extend the scheme was rejected by 322 votes to 261 – a majority of 61.

It was the latest setback in his plea for the Government to fund hot meals for the most needy children during coronavirus lockdowns.

Taking to social media tonight, Rashford wrote: ‘Put aside all the noise, the digs, the party politics and let’s focus on the reality.

‘A significant number of children are going to bed tonight not only hungry but feeling like they do not matter because of comments that have been made today.

‘We must stop stigmatising, judging and pointing fingers. Our views are being clouded by political affiliation.

‘This is not politics, this is humanity.’

Rashford added that child food poverty ‘has the potential to become the greatest pandemic the country has ever faced’.

‘We must start working together and unite to protect our most vulnerable children. No more sticking plasters. Let’s face this head on,’ he said.

He said the requirements of the Child Food Poverty Taskforce remain the same, adding: ‘Following private and public approaches, I once again invite Number 10 to sit around the table with the taskforce so that, together, we can collaborate on how best to combat child poverty in the UK.’

Labour had tried to use the Commons vote today to call for free school meals to be extended over each school holiday from October half-term to Easter 2021.

And a senior Tory said he was considering rebelling to join them. Robert Halfon, chairman of the Commons Education Committee, said the meal scheme should run until the spring at least.

It came after a minister yesterday insisted people would rather pay than accept the ‘label’ attached with handouts.

Taking to Twitter earlier after scoring the late winner that saw Man Utd beat Paris Saint-Germain 2-1 last night, Mr Rashford turned the blowtorch on the Government by urging his 3.4 million Twitter followers to lobby their MPs.

‘Paying close attention to the Commons today and to those who are willing to turn a blind eye to the needs of our most vulnerable children, 2.2M of them who currently qualify for Free School Meals,’ he said.

But former Brexit minister Steve Baker responded angrily, saying: ‘No one will be turning a blind eye and it is wrong to suggest anyone would.’

Mr Rashford replied: ‘At least turn on your comments and let me respond Steve. I very much welcome conversation on this.’

Mansfield Tory MP Ben Bradley later waded in, saying: ‘We’re doing A LOT to help the most vulnerable children, but ever-extending freebies are a sticking plaster not a solution.’

Tory minister Paul Scully told the BBC that ‘children have been going hungry under a Labour government for years’ and insisted the Government had been tackling the issue.

In the Commons, Boris Johnson continued to resist calls for a change of tack.

‘We support kids on low incomes in school and we will continue to do so,’ he told MPs at Prime Minister’s Questions. 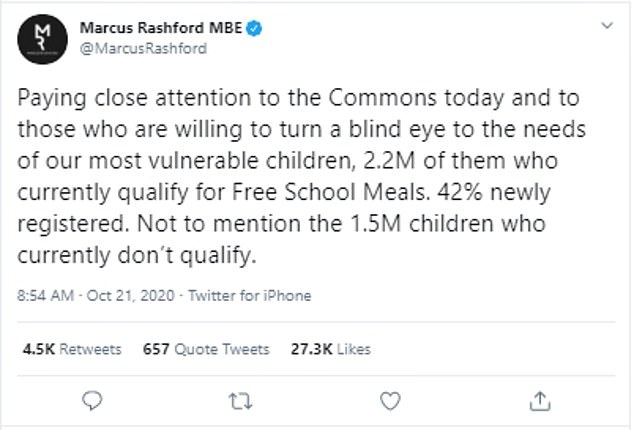 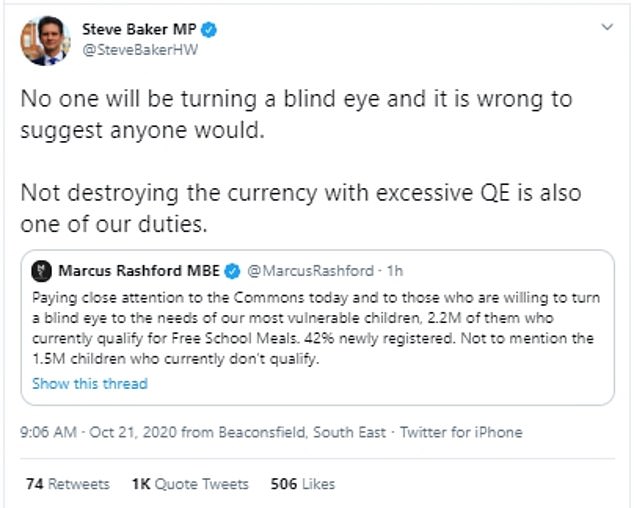 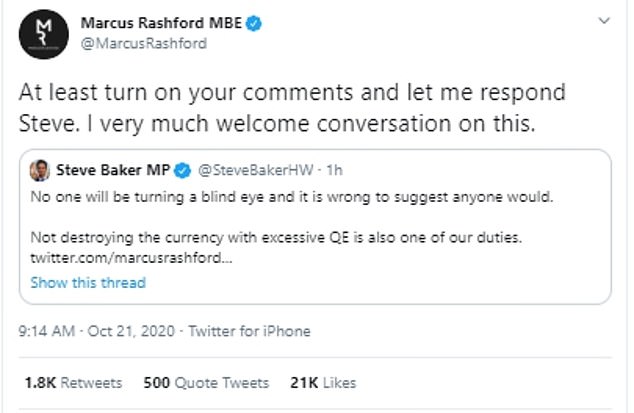 But he became embroiled in a spat with former Brexit minister Steve Baker, who said: ‘No one will be turning a blind eye and it is wrong to suggest anyone would’

‘But the most important thing is to keep them in school and not tear off into another national lockdown taking them out of school.

‘We will continue to use the benefits system and all the systems of income to support children throughout the holidays as well.’

A parliamentary petition started by the England star, which demands food be provided during all holidays and for free school meals to be expanded to all households on Universal Credit, has garnered around 300,000 signatures since being launched late last week.

Mr Rashford, who has been made an MBE for his services to vulnerable children, forced a Government U-turn on free school meal vouchers for eligible pupils over the summer holidays.

The fact that his petition has attracted more than 100,000 signatures means it must now be considered for debate by MPs, under Parliamentary petition guidelines.

‘This vote is about our values as a country and whether the Government, in the middle of this crisis, is happy to let our children go hungry,’ she added.

Mr Halfon said earlier he could support a Labour motion calling for their extension to next Easter in the Commons on Wednesday.

‘I will either vote for the motion or abstain depending on what the Government says,’ he told the BBC Radio 4 Today programme. 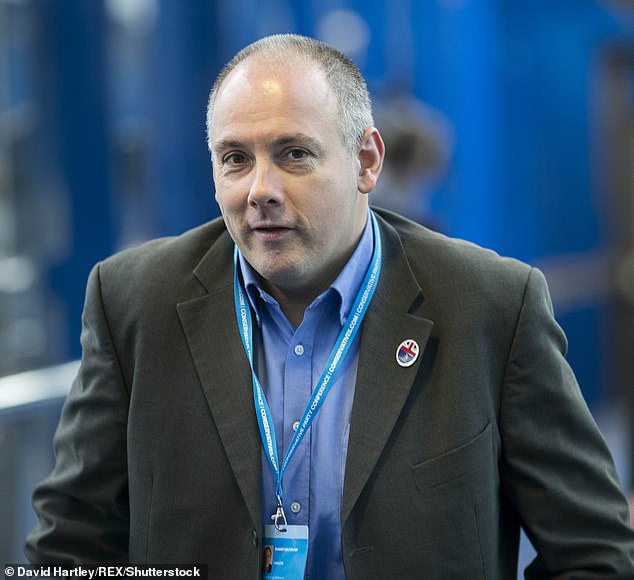 Robert Halfon, chairman of the Commons Education Committee, said the meal scheme should run until the spring at least and threatened to back Labour in a vote today

He added: ‘What the Government needs to do is to have a long-term plan, sit down with the taskforce set up by Marcus Rashford and actually come up with a serious plan and a budget to deal with this problem.

‘All the statistics show that families are struggling. We know that 10% of families are affected by food insecurity.

‘I am not arguing this should happen for ever but the free school meals should at least go on until we are out of the coronavirus, god willing, by next spring.’

‘The ongoing pandemic has had a heavy impact on many across Teignbridge, bringing with it significant economic difficulties for many,’ she said.

‘This is why I am supporting the motion calling for the continuation of direct funding for FSM over school holidays until Easter 2021. 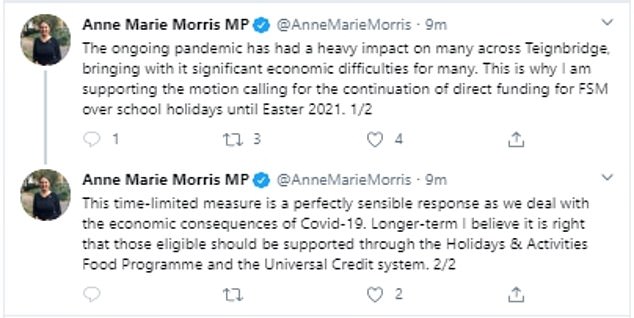 ‘This time-limited measure is a perfectly sensible response as we deal with the economic consequences of Covid-19. Longer-term I believe it is right that those eligible should be supported through the Holidays & Activities Food Programme and the Universal Credit system.’

However, Downing Street has shown reluctance to extend the scheme, with a spokesman indicating last Thursday that ministers would not provide free school meals to children in England during the Christmas break.

He said Universal Credit benefits were available to support hard-pressed families and suggested that research from holiday clubs shows that parents prefer to pay a small sum for food.

He told BBC Radio 4’s Today programme: ‘The research when we did the pilot demonstrates that families didn’t just want the meals.

‘Although they valued the meals, they didn’t like the labelling of them being free. They actually prefer to pay a modest amount, £1 or £2.’