RICHARD LITTLEJOHN: Picture taken when young Philip married his princess shows who we could be again

There was one picture in particular which stood out for me in the blanket coverage of the life and times of the Duke of Edinburgh. And, no, it didn’t feature Phil the Greek himself.

It was the reproduction of a joyous photograph from the Daily Mail on November 21, 1947. The image could have been the inspiration for one of my favourite Randy Newman songs, Jolly Coppers On Parade. But, obviously, it wasn’t.

Taken on The Mall when a young Philip Mountbatten married his princess, the lovely Lilibet, it showcased seven Metropolitan Police officers linking arms and laughing their caps and helmets off as they corralled the crowds straining to get a glimpse of the couple.

On the right, there’s a nervous-looking, fresh-faced bobby straight out of Hendon training college. It could have been my father. Dad joined the Met after serving in the Royal Navy during World War II. Until yesterday, I have never wondered where he was on our future Queen’s wedding day. But since he was stationed at Fulham, four miles down the road, he must have been on duty.

Police leave would have been cancelled for the country’s special day of celebration, which Winston Churchill described as ‘a flash of colour on the hard road we have to travel’.

So he was probably there or thereabouts, as the pundits say on Match Of The Day.

It wasn’t the pomp and circumstance which struck me, but the smiling faces of the people who had turned out to wish the couple well.

The Arthur Askey NHS specs, the formidable matron in matching frock, cardy and fur-trimmed titfer. To adapt another Randy Newman lyric, this is my country, these are my people . . .

OK, so I wasn’t born for another seven years. But this is the England, the Great Britain, which made me.

Which is where the royals come in. After a lifetime of agnosticism, at best, and, at worst, outright hostility towards the institution of the monarchy, in my old age I’m beginning to see the point. Whether that will endure beyond the lifetime of Her Maj remains to be seen. 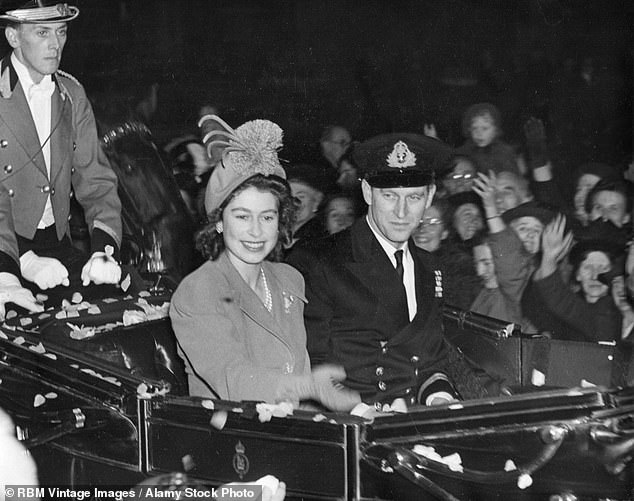 My colleague of more than 40 years, Peter Hitchens, wrote a glorious column in the Mail on Sunday drawing parallels between Prince Philip and his own father, a former naval commander.

My old man served on the Russian convoys, too, in a less exalted but equally important capacity. What he had in common with Philip, and Peter’s dad, and most other men of his generation was an abiding appreciation of duty, of propriety, of chivalry, of modesty, as well as a wicked sense of humour — never bettered than in Spike Milligan’s hilarious wartime memoirs.

Dad was a couple of years younger than Philip, and though he had claret and blue blood, as a consequence of being brought up in the shadow of West Ham football ground, when it came to what really matters he shared the same blue blooded traits as the Duke — love, respect and support for the women in his life uppermost.

Mum, too, is a contemporary of Her Maj. In later years, whenever I’ve seen the Royal couple they have reminded me of my parents, even though they hail from completely different backgrounds. And that has to be the purpose of the monarchy. To reinforce the ties that bind.

On the day of the Diamond Jubilee, in 2012, Mum rang me to say: ‘I’ve just seen your friend on television, on top of Buckingham Palace.’ 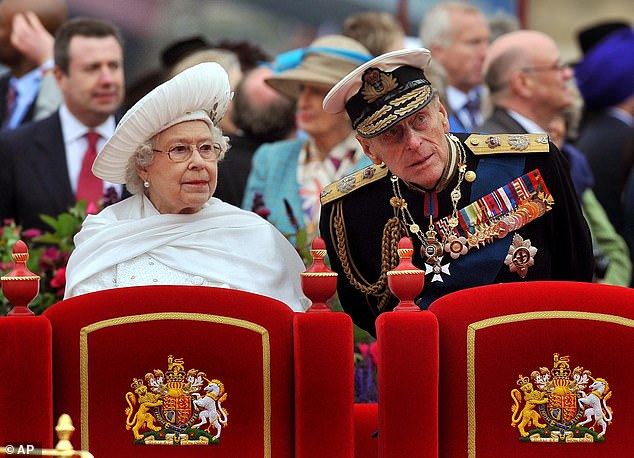 On the day of the Diamond Jubilee, in 2012 (pictured), Mum rang me to say: ‘I’ve just seen your friend on television, on top of Buckingham Palace’

‘From Gerry’s, in Soho. The singer. I met his mother at your book launch.’

‘Yes. He’s on the roof at Buckingham Palace.’

I turned on the TV and there was Suggsy bouncing around on top of Buck House with the rest of Madness.

Welcome to the House of Fun.

That piece of surreal, er, madness was about 200 yards down the road from the very spot the photo of the crowd was taken in 1947. But it could have been yesterday. Sure, we’re more ethnically diverse these days. The Old Bill aren’t the Jolly Coppers of popular imagination, simply citizens in uniform. These days, they’d be kitted out in hi-viz riot gear and that matron would have had her face shoved into the ground for breaching the anti-Covid cordon.

Underneath it all, though, I cling to the hope that we’re still the same people. That was reinforced by the procession of black cabs in The Mall, an echo of the way in which London dockers — my grandfather among them — dipped their cranes along the Thames on the morning of Churchill’s funeral.

The best way we can honour Prince Philip is not to lament the fact that he’s one of the last of a dying breed, but to rediscover the qualities he brought to the party. 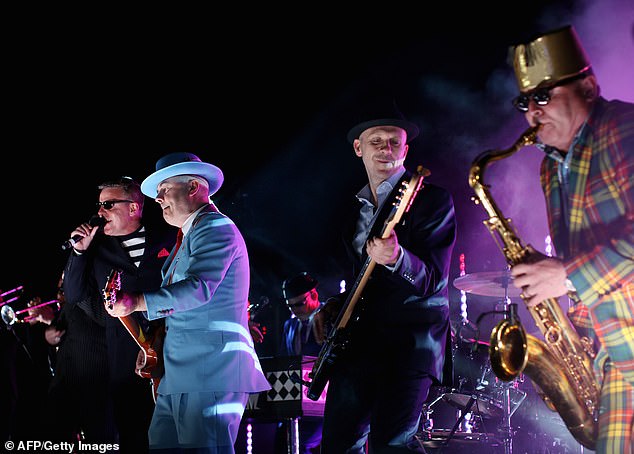 Let’s junk the introspective, social-media fuelled, self-pitying, self-centred, onanistic cult of victimhood. Let’s dismiss the cancellation fascism, and the corporate cowardice and opportunism which underpins it, with ridicule and the contempt it deserves.

The mentally ill Twitterati even tried to destroy Britain’s most-loved actor Sir David Jason over some harmless remarks dating back to . . . actually, who cares?

They weren’t. Far from it. Philip, through his pioneering Duke of Edinburgh’s Award scheme, brought people of all faiths and colours together; played uncomplaining second fiddle to his wife and blessed his gay cousin’s single-sex marriage.

The greatest tribute we can pay to the Duke and his generation is to honour the freedoms they won through their sacrifices, to extract our heads from our own backsides and stop picking the fluff from our own navels.

To celebrate self-deprecation, the ability to laugh at ourselves and others — without fear of the ‘hate crime’ lynch mob.

Let’s put proper bobbies back on the beat, instead of patrolling the internet for the kind of ‘inappropriate language’ which would today lead to them nicking the Duke of Edinburgh in his prime.

Let’s look at that wonderful photograph from 1947 and remind ourselves who we were, and who some of us hope we still are.

And who we can be again.

The other picture which I loved was Philip chatting up Hollywood madwoman Gwyneth Paltrow. Far be it from me to suggest that either of them had conscious coupling on their mind. 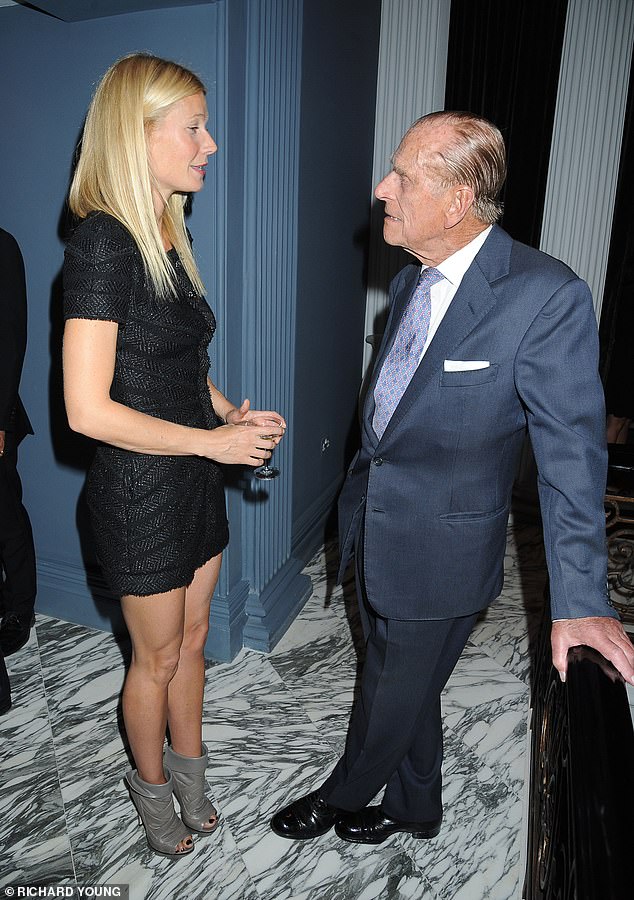 But, at 80-something, he was still in full lounge lizard mode and she was lapping it up. There’s hope for us all.

The photo lends itself to the Mail Letters speech bubble treatment.

But after playing with every possible permutation of eggs and candles, I’ve failed to come up with any caption which could be printed in a family newspaper . . .

To celebrate freedom from lockdown, shoppers in London and Birmingham started brawling over cheap trainers.

And outside Buck House, parents were taking selfies with their kids laying flowers and gormless teenagers in Union Jack masks were filming themselves crying over someone they didn’t know and couldn’t pick out of an identity parade.

Meanwhile, the BBC is offering grief counselling to staff upset at the death of Prince Philip.

Makes You Proud To Be British.

Meghan Thee Stallion’s previous pregnancy didn’t stop her flying to New York for a baby shower. So it’s a shame she can’t be on parade at her husband Harry Markle’s grandfather’s funeral.

Plus, the couple’s ‘Thank you for your service’ tribute is merely a lazy cliche in the U.S., doled out as a matter of course to anyone in the military.

Right up there with ‘Have a nice day’.

That’s me and football finished. I’ve binned my season ticket.

On Sunday, after observing a respectful silence for Prince Philip, Spurs and Manchester United players, and Premier League officials, fell to their knees and some gave the black power salute in supplication to a Marxist organisation which hates everything the Duke and his generation stood for and intends to topple all they represented, starting with Churchill’s statue.

Have these pathetic, brain-dead dupes no idea quite how disgusting most of the people who pay their wages find them? 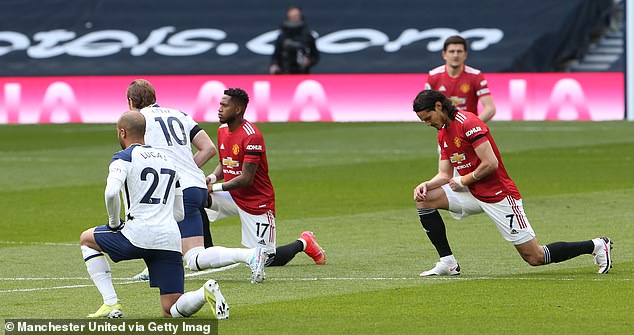 After observing a respectful silence for Prince Philip, Spurs and Manchester United players, and Premier League officials, fell to their knees

Saving the kelp forest that stars in My Octopus Teacher