Trains are empty and roads deserted today following England’s Euro 2020 heartbreak with cities seeing traffic levels around a quarter lower than average during the morning rush-hour.

Millions of exhausted school children who stayed up late for extra time and penalties are being allowed to stay at home until between 10am and 10.30am today so they can catch up on some rest.

And some bosses have given their staff the morning off or even the entire day at home to recover from the excesses and disappointment of last night after a match that also left many of England’s players in tears.

Congestion levels were down in all English cities this morning, with roads in Birmingham, the home of Jack Grealish, seeing traffic 21 per cent lighter than average, according to experts TomTom.

Bristol and Leicester’s traffic levels 24 per cent lower than normal, London’s roads were 11 per cent less busy and Manchester, the home city of Marcus Rashford, was 9 per cent down. 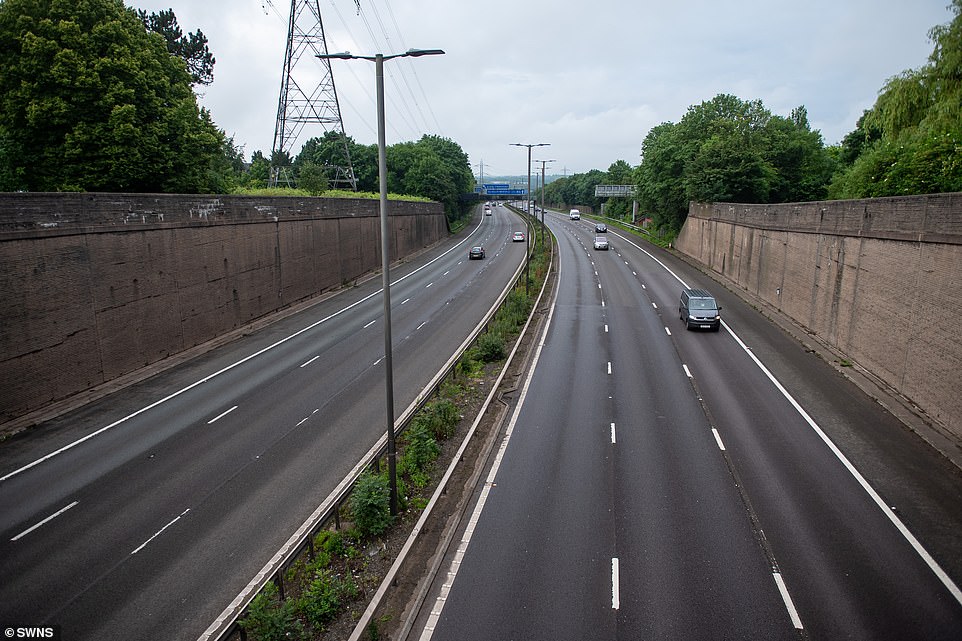 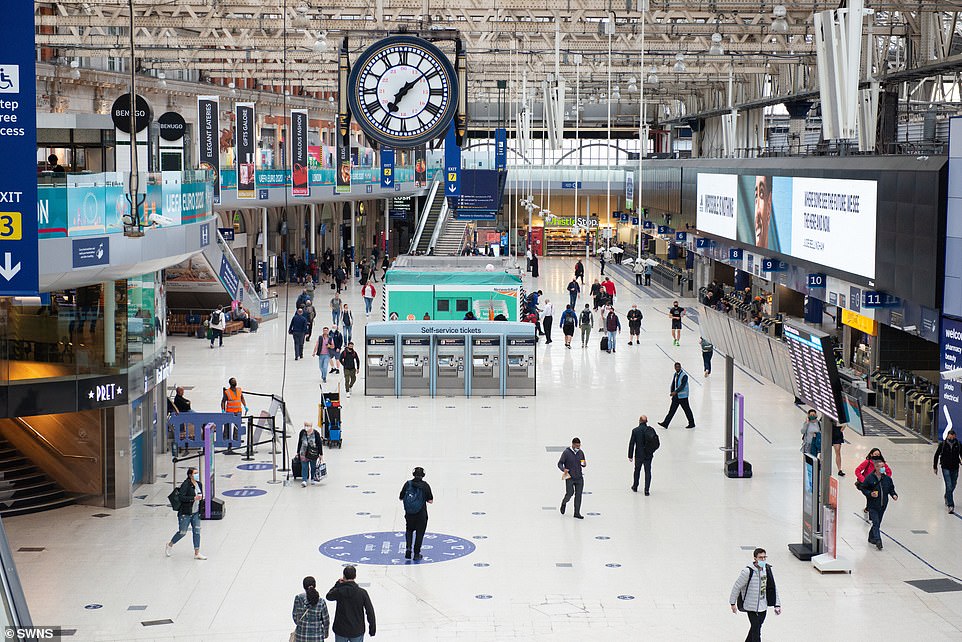 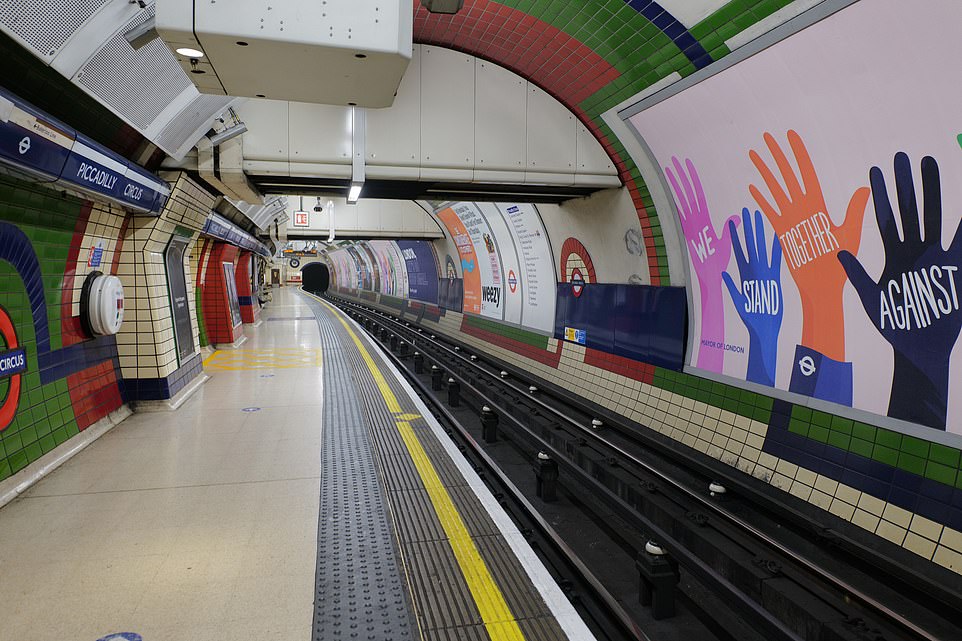 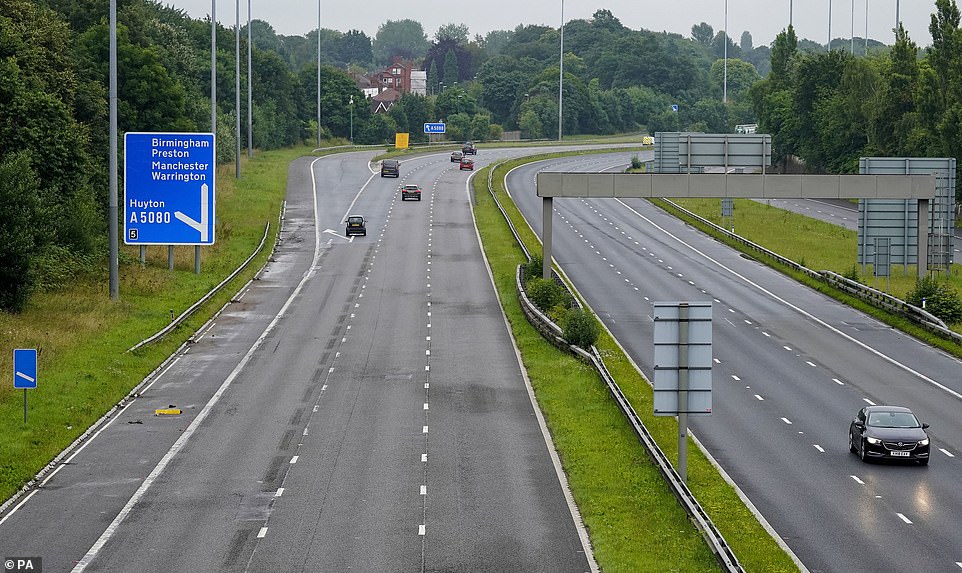 Grief-stricken England fans are still demanding an extra bank holiday from Boris Johnson, as a day of mourning, with the Prime Minister set to make a decision about an extra day off in August this week.

Bereft supporters were nursing sore heads as they stayed at home after England’s Euro 2020 defeat with disappointed fans declaring: ‘The whole country is hungover’.

And photographs from the morning rush hour showed it was no such thing, with the Tube and trains into the capital largely deserted, including in Wembley.

England are fans still demanding a bank holiday from Boris Johnson after hundreds of thousands signed a petition.

After the match last night one fan tweeted: “We still get our bank holiday though, right?”, another said: ‘ We need a bank holiday to mourn’ while a third supporters mused: ‘Can’t believe a bank holiday was decided on penalties’.

School across England are allowing pupils a lie-in on Monday following the Euro 2020 final. They are launching later registrations to let pupils stay up late to watch the England versus Italy game at Wembley.

London’s roads were 11 per cent less busy than normal this morning, according to data from TomTom 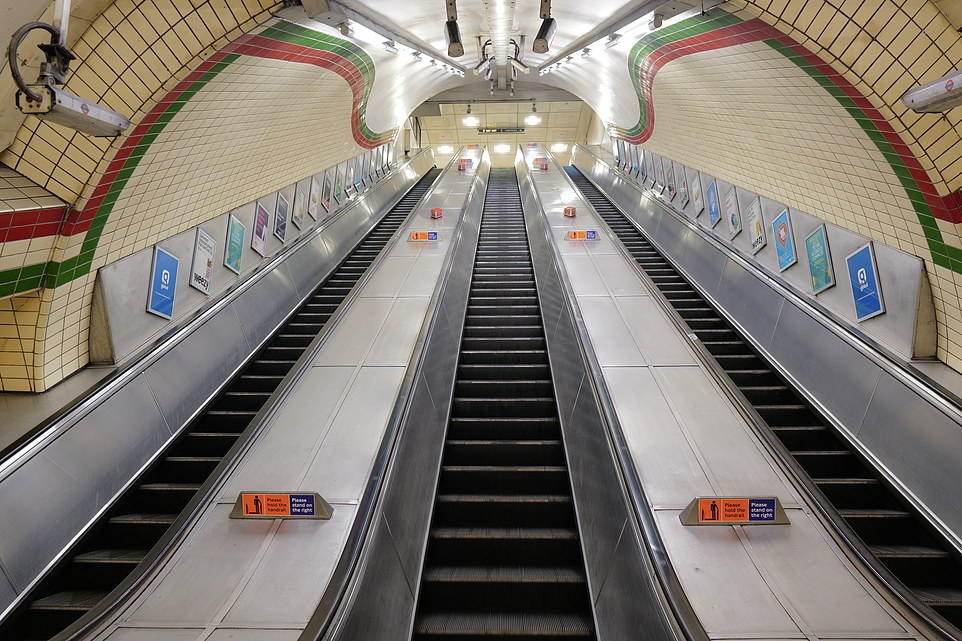 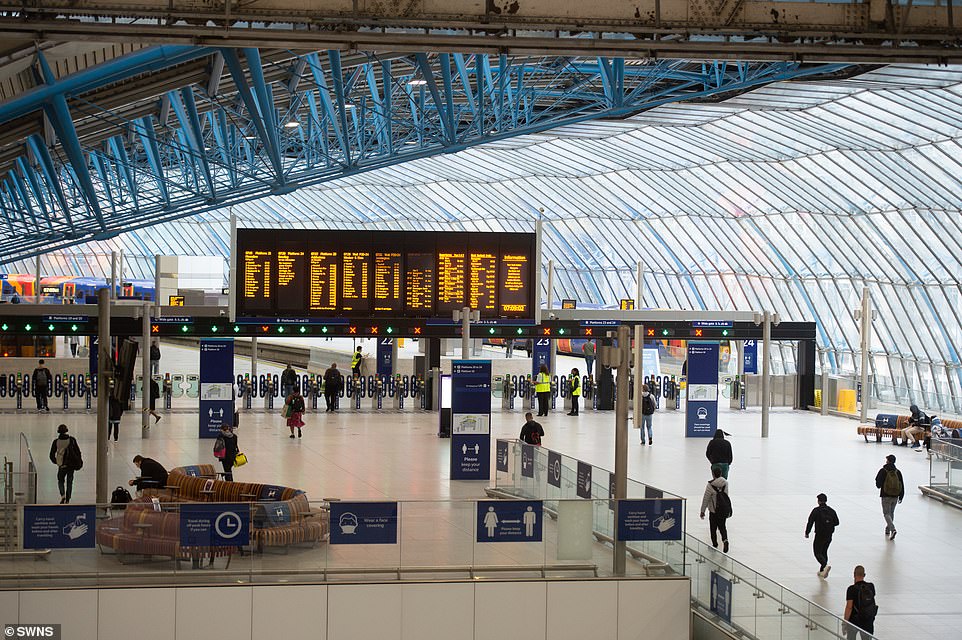 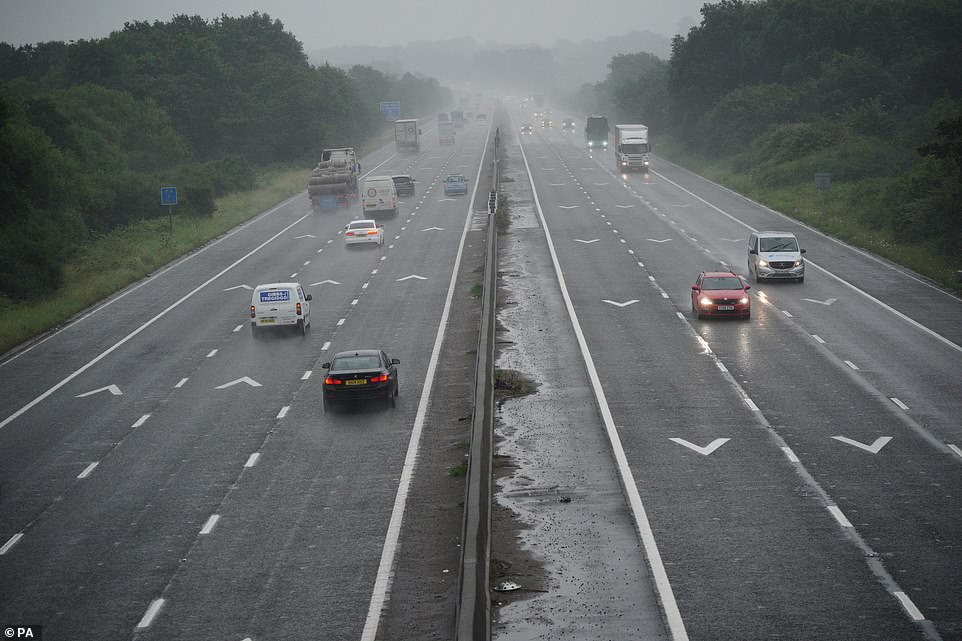 A quieter than usual M4 motorway at 7.55am between junctions 18/19 approaching Bristol and the Almondsbury interchange

Gemma Donnelly, head of Braywick Court School in Bray, Berkshire, has told parents that children will not be marked as late if they are in by 10.30am.

In a letter to families, Mrs Donnelly said: ‘This gives you the option to stay up late and watch the match, or watch it in the morning before coming to school if you would like to.’

Parklands primary school in Leeds has informed families that children can start from 10am to avoid absences.

Headteacher Chris Dyson said staff would be onsite at the usual time if parents need to drop off children, but he would ‘rather pupils came in at 10am than not at all’.

Rossmere primary school in Hartlepool says the event is one of ‘national pride’ and the ‘job of schools is to give children the bet experiences possible’.

The school will open at 8.40am on Monday, but those arriving up to 10.30am will not be marked as late or miss lessons.

In a statement posted to Facebook, the school said: ‘It’s 55 years since England reached a major football final so let them watch, talk about the importance of the National Anthem, talk about pride and resilience and possibly disappointment. This is a learning opportunity.’ 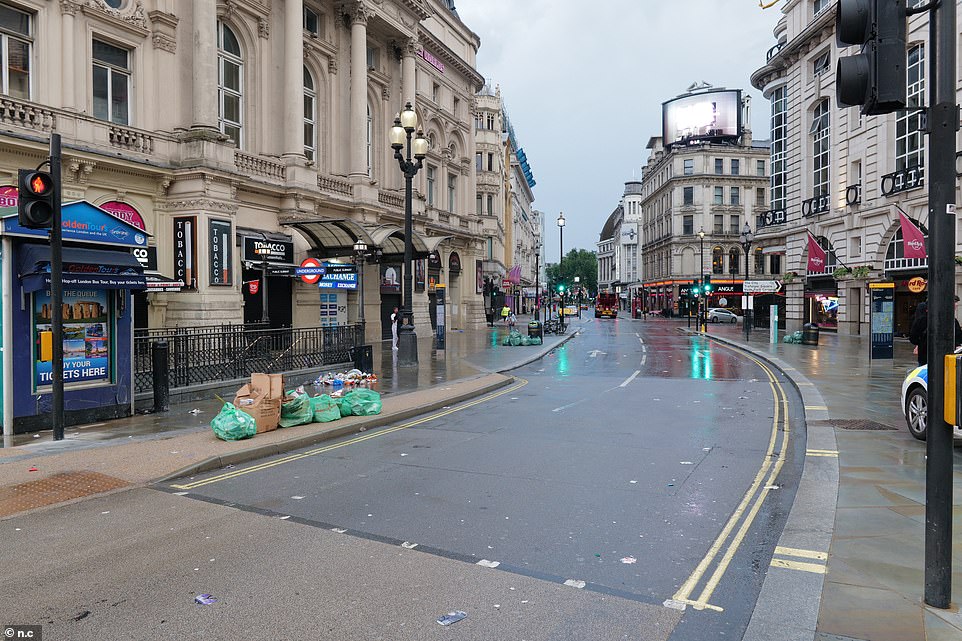 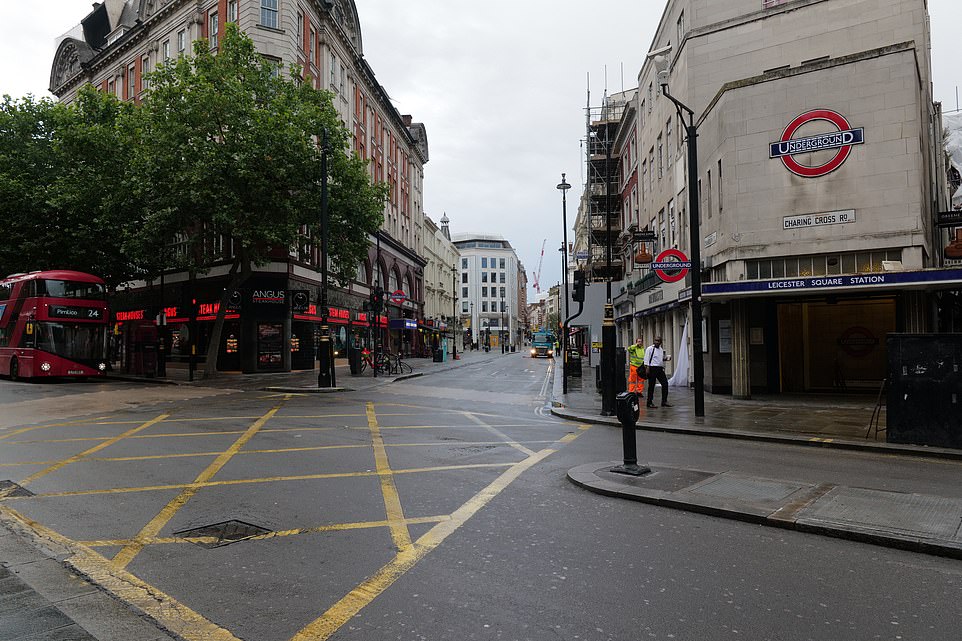 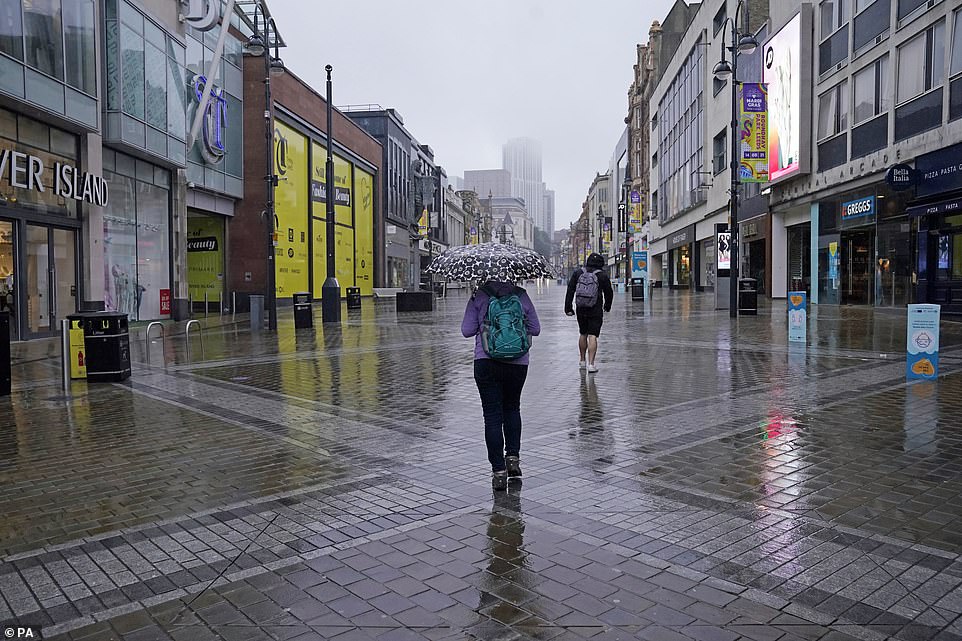 The scene in Leeds city centre today, the morning after England were beaten in the final of Euro 2020 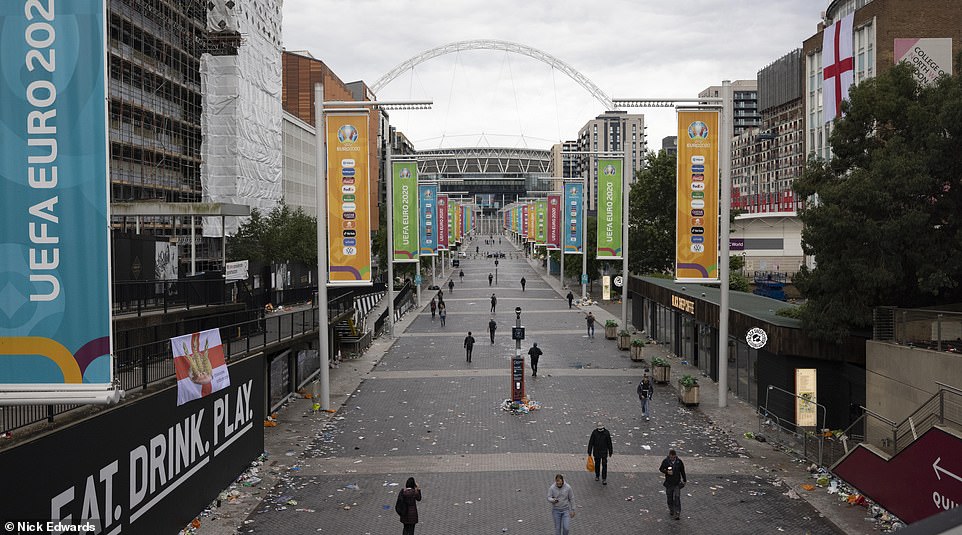 England’s Three Lions, who had united the nation with their run to the final, saw their Euro 2020 dreams shattered by Italy last night.

The match finished 1-1 after extra time but three missed spot-kicks handed the trophy to the Azzurri and saw England miss out on their first major tournament victory since 1966.

Three Lions fans and players alike were reduced to tears.

The 70,000-strong crowd at Wembley, along with an estimated UK TV audience of 35million, had let out a collective roar when Luke Shaw scored for England after only two minutes.

But the optimism dimmed when Italy equalised in the second half and the game moved into a nail-biting extra 30 minutes Leonardo Bonucci reacted the quickest to stab the ball into the net.

His strike saw the 9,000 Italian fans inside Wembley scream and leap with delight. There were no further goals, allowing England’s penalty curse to strike again.

Prince George, who was wearing the official England tie with his dark suit, yelped with delight and threw his arms in the air. The seven-year-old gave his mother Kate a big hug while his father Prince William grinned and clapped. 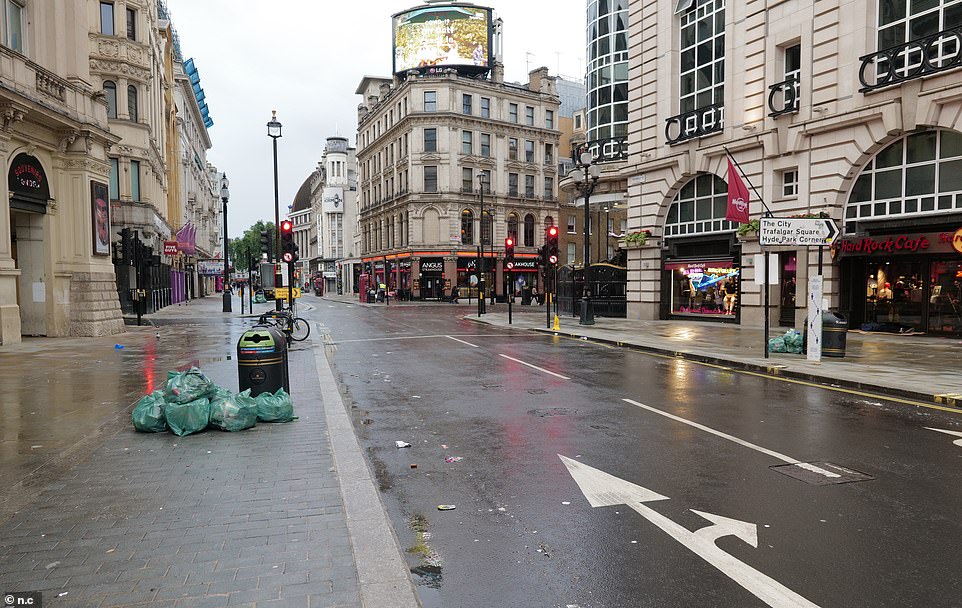 The West End of London, which was teeming with supporters last night, was also exceptionally quiet close to Trafalgar Square 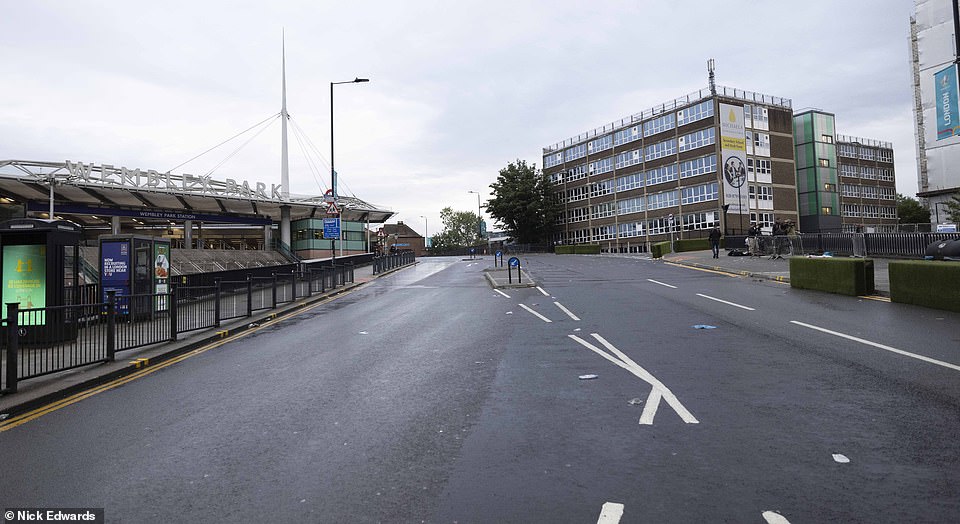 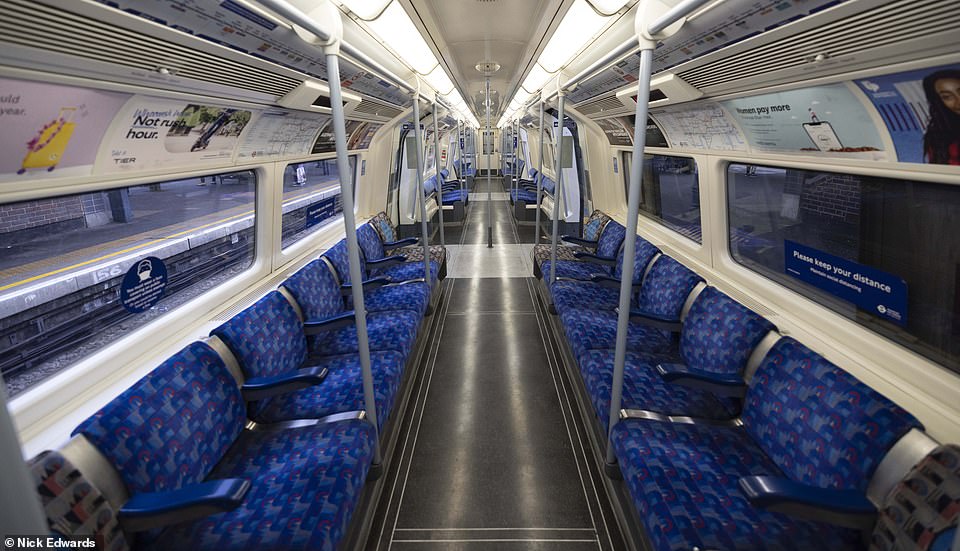 There was a similar scene on the Jubilee Line in rush hour, with not a soul on the carriage this morning 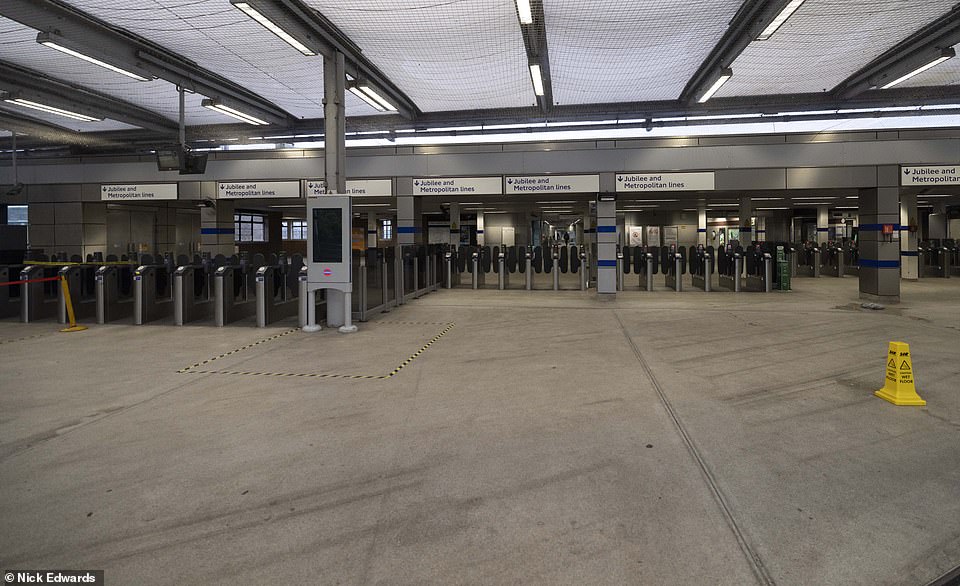 After the match William congratulated the Italian football team and said of England: ‘You’ve all come so far, but sadly this time it wasn’t our day. You can all hold your heads high, and be so proud of yourselves – I know there’s more to come.’

Boris Johnson, who was also at Wembley, tweeted: ‘That was a heartbreaking result to end Euro 2020 but Gareth Southgate and his England squad played like heroes.’

Labour leader Sir Keir Starmer tweeted after the whistle: ‘Heartbreaking. On and off the pitch, this team is the very best of our country. They’ve done us proud.’

Around two hours before kick-off, hundreds of fans without tickets ran through a set of security barriers as stewards and riot police gave chase. A number managed to get into the ground, forcing their way through turnstiles, VIP and disabled entrances.

Traffic was down in all major cities this morning, but especially in the Midlands including Birmingham (pictured). London and Manchester’s roads were also less busy

Wearing England shirts and draped in St George’s flags, fans with and without tickets had started gathering on Wembley Way ten hours before the game. Red flares and fireworks were let off and fans clambered on top of red London buses and traffic lights as excitement levels reached fever pitch.

Tens of thousands repeatedly belted out the England football anthem Three Lions, along with I’m England ‘Till I Die, God Save the Queen and Neil Diamond’s classic song Sweet Caroline.

Despite falling agonisingly short last night, England’s attention will turn to the next World Cup – starting in 496 days.

The tournament is moving from its usual summer berth to winter because it will be played in the scorching heat of Qatar.

Who's who in the royal box on Wimbledon Men's Finals day

The Witcher: Old World Is a New Board Game Set Before Geralt’s Career