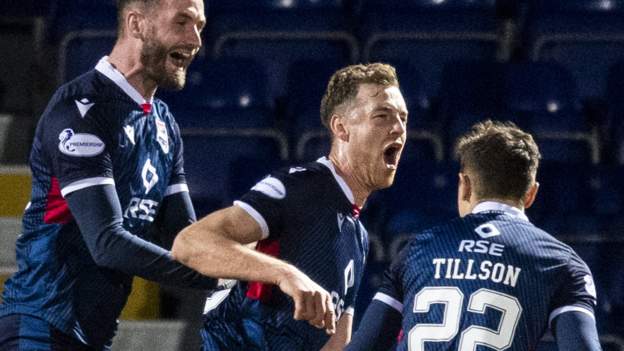 
Ross County moved out of the Scottish Premiership relegation places after their second win over Celtic this season all but ended their visitors’ slim title hopes.

Jordan White’s 71st-minute header hauled County up to 10th and added to their League Cup win in November.

They are left trailing Rangers by 18 points with eight games left.

That means Gerrard’s side would guarantee the title with a draw in the Old Firm game on 21 March, should they win their next two games.

However, they could win it as soon as 6 March, if Celtic lose to Aberdeen next Saturday.

Celtic arrived in Dingwall on form. Five wins in a row, with 13 scored. In contrast, County had conceded 11 in their last last five and had found themselves rooted to the bottom of the table.

The visitors cleaved out first-half chances, but County did too. Scott Bain had to tip wide a dangerous Blair Spittal pile-driver towards the near post, and Tony Andreu headed over from the corner.

Celtic were always going create something, and when Odsonne Edouard outpaced the defence and cut-back to Ryan Christie, it looked certain to be 1-0. But the Scotland international blasted over from close range.

Christie headed wide and had a near-post shot saved and Diego Laxalt – who replaced the injured Grey Taylor – shot over.

But then County sucker-punched them at the other end. Harry Paton’s free-kick found White, who rose powerfully to head in off an upright in what could be a huge moment in County’s fight for survival.

Christie continued to be Celtic’s main threat but a jinking run into the box ended with another shot over.

Celtic piled on the pressure and almost broke County hearts in the final minute, but Laidlaw got his fingertips to a Mohamed Elyounoussi header.

A late, late Leigh Griffiths free-kick sailed over as County won for the first time against Celtic in the league for eight years, and the second time in three months.

Man of the match – Michael Gardyne

County have had a knack this season of producing the best results against the bigger sides. They have won at Easter Road and Celtic Park and hammered Aberdeen at home. And, in their fight to stay up, they have produced another seismic result.

Celtic all too often tried to play too much football on a pitch that was unforgiving. Despite an enormous amount of the ball, home goalkeeper Laidlaw will have had busier nights.

Ross County manager John Hughes: “Absolutely fantastic. We knew there would be long periods where we wouldn’t have the ball but we defended for our lives. We rode our luck a little bit but the chances we gave up were mistakes of our own doing.

“Tactically we were spot on all night. We’ve been banging on about set-pieces for a while so it’s really pleasing to get one from a free-kick.”

Celtic manager Neil Lennon: “It’s a strange one. It’s another poor goal from a set-piece. But I think we played well tonight and did enough to win the game.

“The goal is inexcusable. Our defenders don’t seem to want to defend this season. We do the work on the training pitch but if the players don’t attack the ball there’s not much you can do. It’s been a running theme for us this season for whatever reason.”

Ross County travel to St Mirren on Saturday (15:00 GMT), and at the same time Celtic will be at home to Aberdeen.

Up or down? Bitcoin Cash (BCH) price prediction for March

Up or down? Bitcoin Cash (BCH) price prediction for March