Seven people have been killed amid ‘war-like’ riots and looting in South Africa following the jailing of ex-president Jacob Zuma.

Demonstrations broke out Friday after Zuma was taken to prison to start a 15-month term for failing to cooperate with a corruption probe, and quickly turned violent.

Fighting has been centered on Zuma’s home state of KwaZulu-Natal – where a shopping centre was burned and looted on Monday – but have also spread into neighbouring Guateng state and its largest city, Johannesburg.

Suhail Essa, a doctor in the city, described scenes at the weekend as ‘a glimpse into hell’ as his clinic was flooded with patients including a six-month-old girl who was shot in the head by a rubber bullet.

The military has now been called in to help restore order amid fears the violence could rapidly escalate. 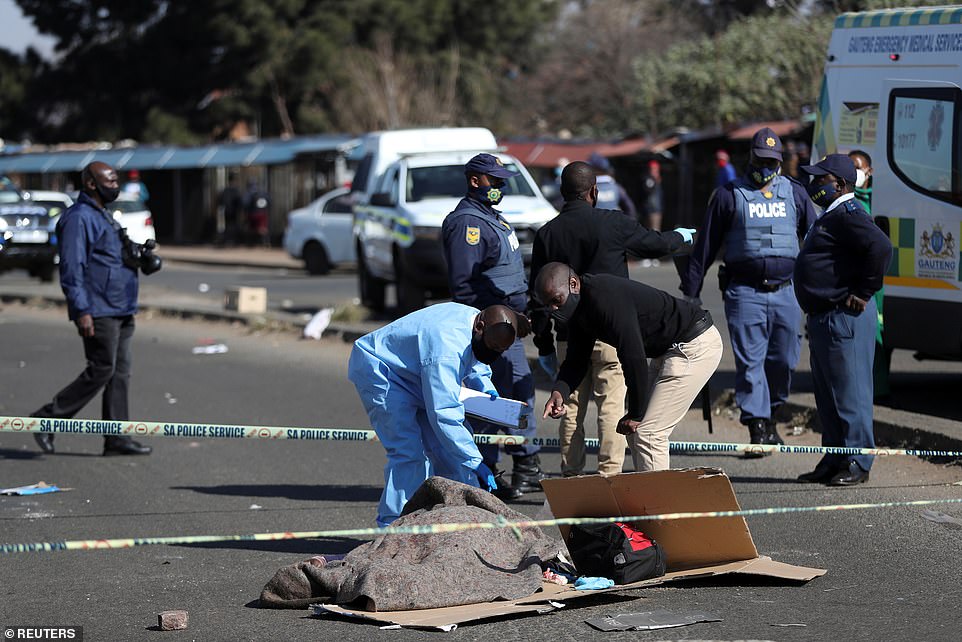 Police and forensic experts inspect the body of a man shot dead in Katlehong, South Africa, amid rising violence over the jailing of ex-president Jacob Zuma 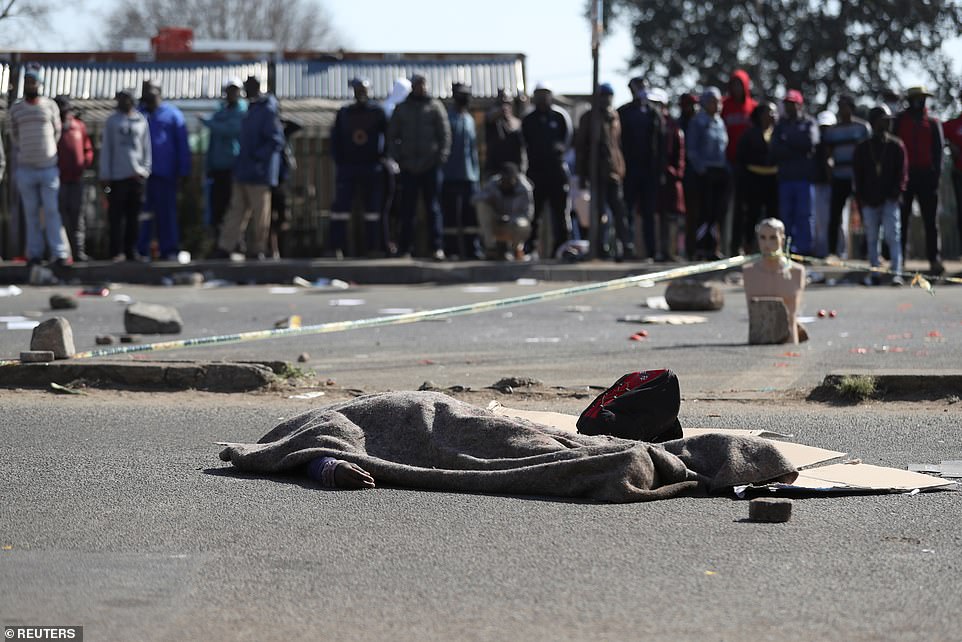 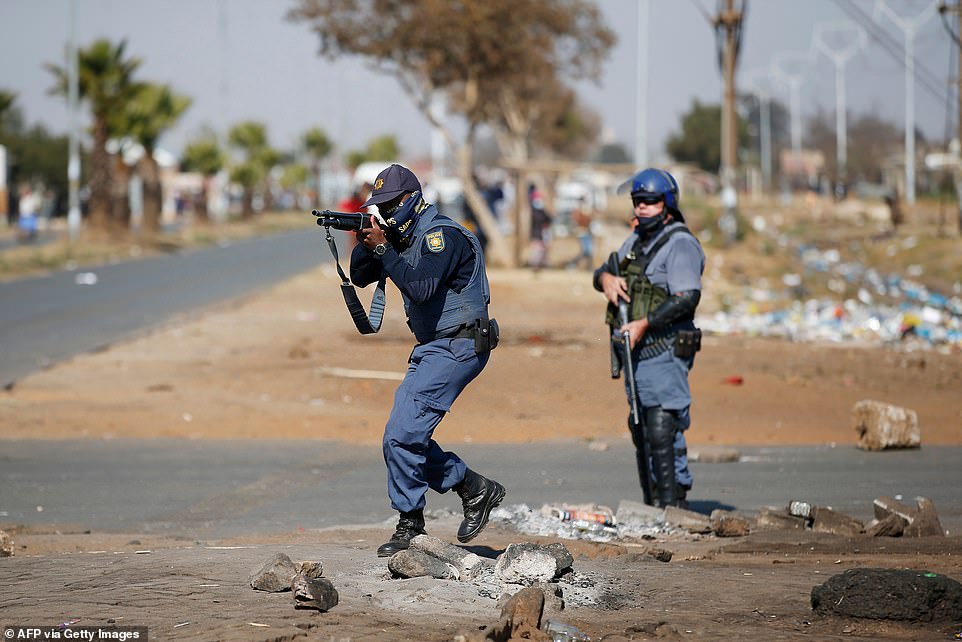 A police officer carrying a shotgun aims it at looters ransacking a mall near Johannesburg on Monday morning, as violence which began at the weekend continued into this week 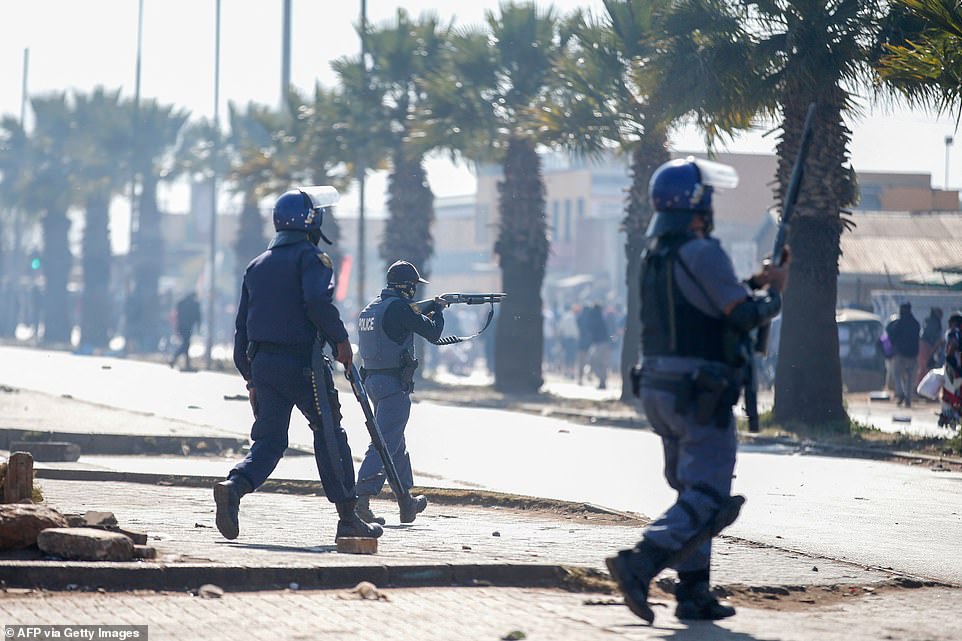 South African police officers aim shotguns at rioters and looters outside the Lotsoho Mall in Katlehong township, east of Johannesburg, after violence on Monday morning 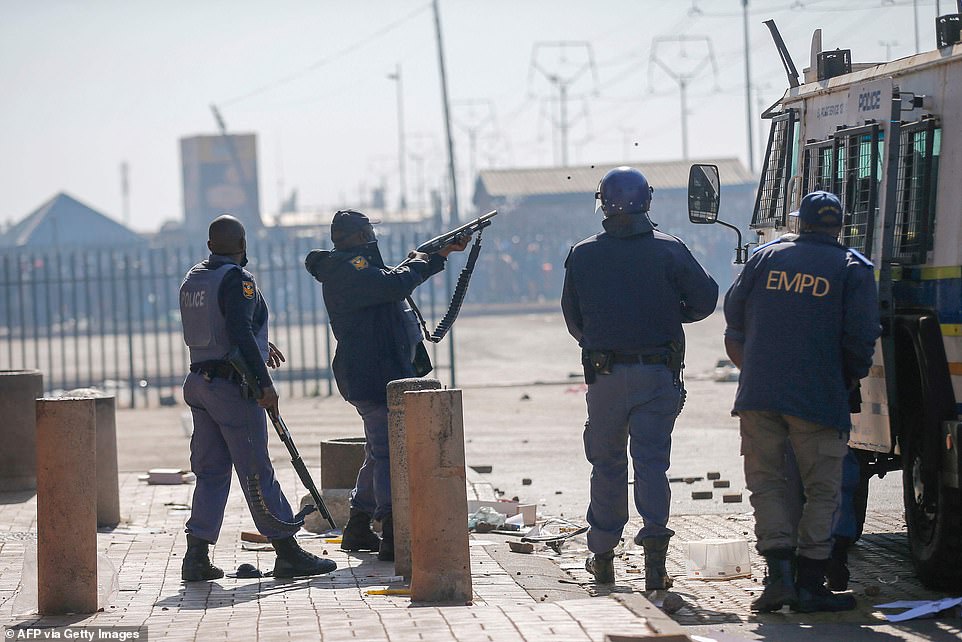 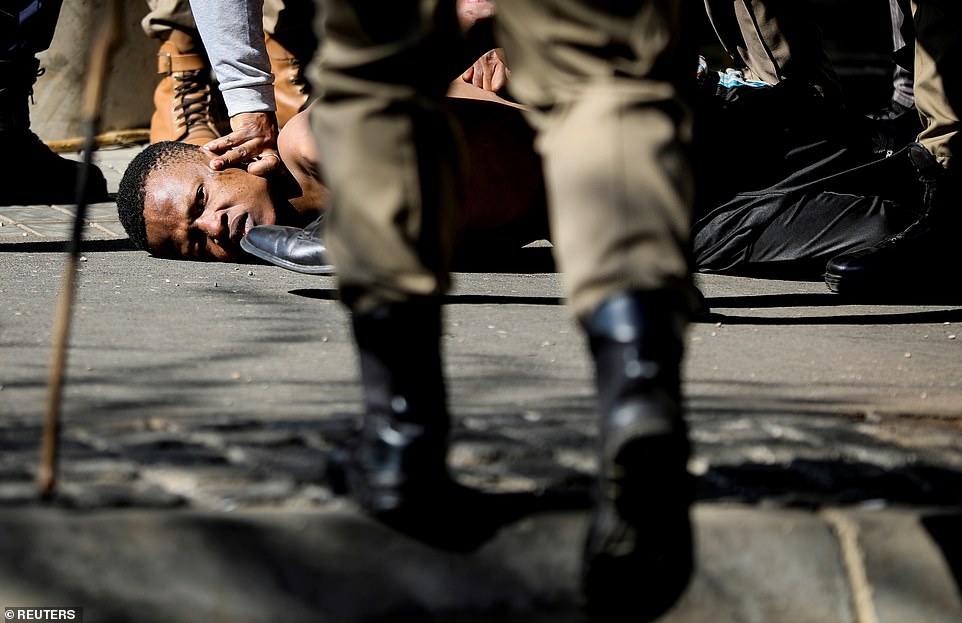 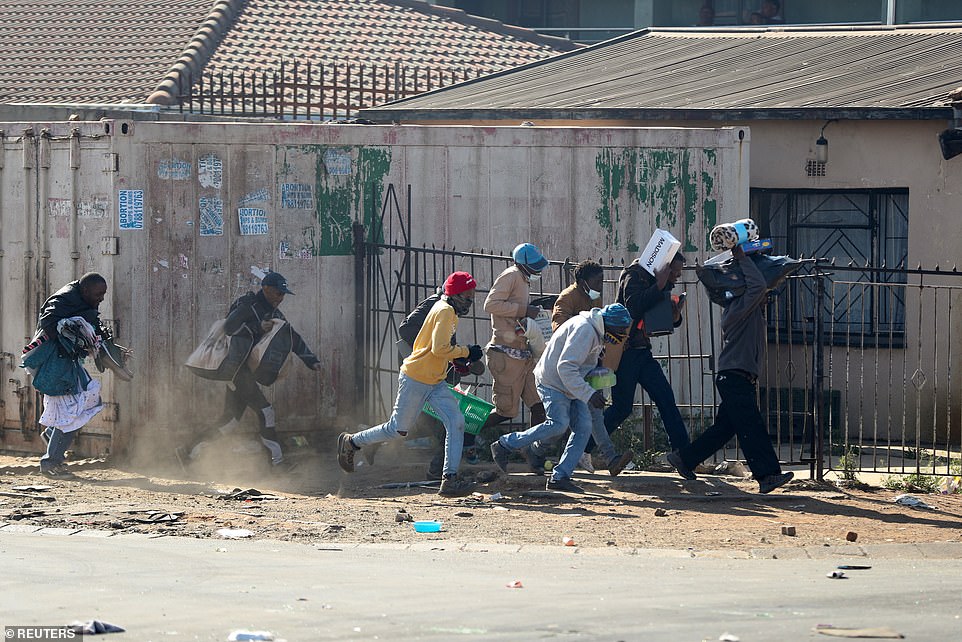 Looters flee police with stolen goods after ransacking a mall in Katlehong, near Johannesburg, amid unrest sparked by the jailing of ex-president Zuma 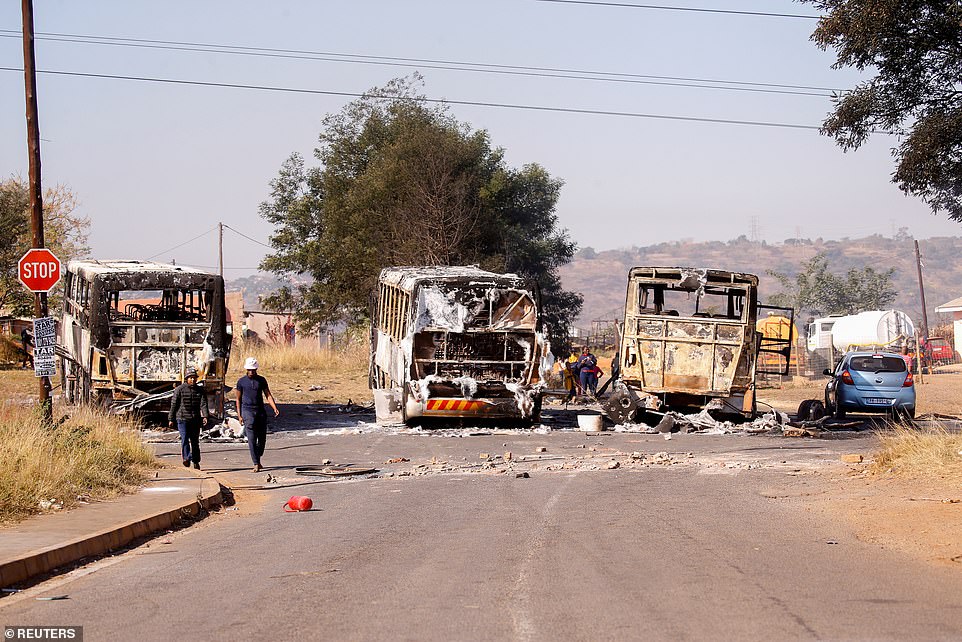 Burned-out buses and trucks are seen on a road close to Pietermaritzburg, in KwaZulu-Natal state where the worst of the violence has been located 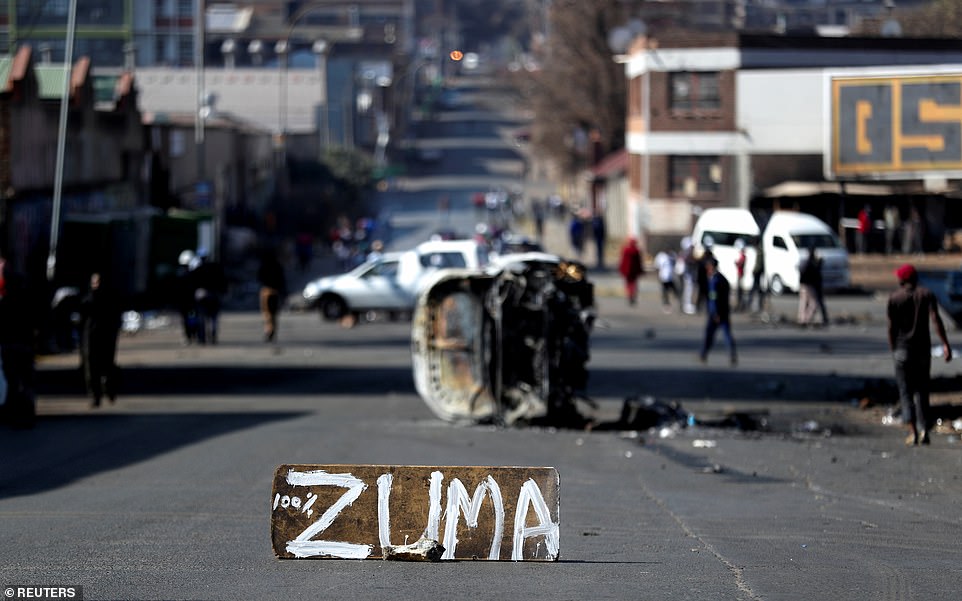 Dr Essa said the girl was being carried by her mother when she got caught up in the violence, before being stuck by the bullet. He did not say whether she survived.

He told News24 of ‘war-like’ conditions inside his clinic, saying: ‘We were listening to gunshots and screams, and then people were running in for help.’

Among other injuries he treated was a person shot in the eye by a rubber bullet, and multiple foreigners who were stabbed in what he called ‘xenophobic’ attacks.

The situation then descended further into chaos as people began fighting with doctors inside the clinic, before a mob turned up and tried to storm inside.

‘It was a nightmare. There was no chance for us to keep up with the injured patients,’ he added.

‘We were in war mode, dealing with the sickest and helping those who could be saved.’

The violence was sparked by a judicial investigation into Zuma, a veteran of South Africa’s fight against apartheid and white minority rule, over his relationship with three Indian-born businessmen and brothers known as ‘the Guptas’.

He is accused of allowing Atul, Ajay and Rajesh Gupta to plunder state resources and peddle influence over government policy.

The 79-year-old has refused to cooperate, describing the investigation as a witch-hunt by his successor Cyril Ramaphosa, and last week defied a court ruling to appear before the inquiry and give evidence.

A judge subsequently jailed him for 15 months for contempt of court, and he was taken to prison on Thursday last week after surrendering to police.

His jailing sparked a wave of violent protest that began Friday and has continued ever since, centered around his home state of KwaZulu-Natal. 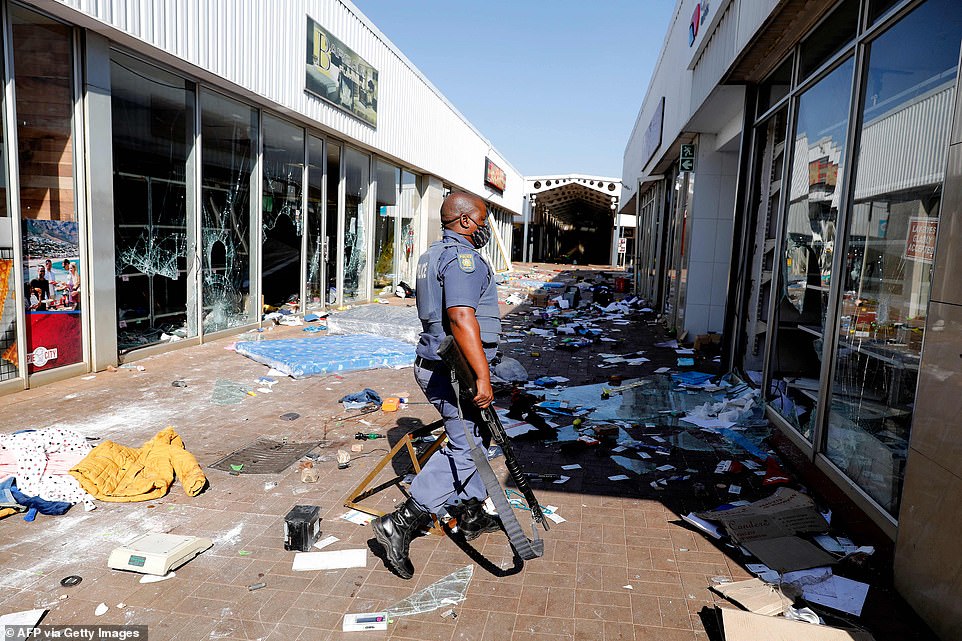 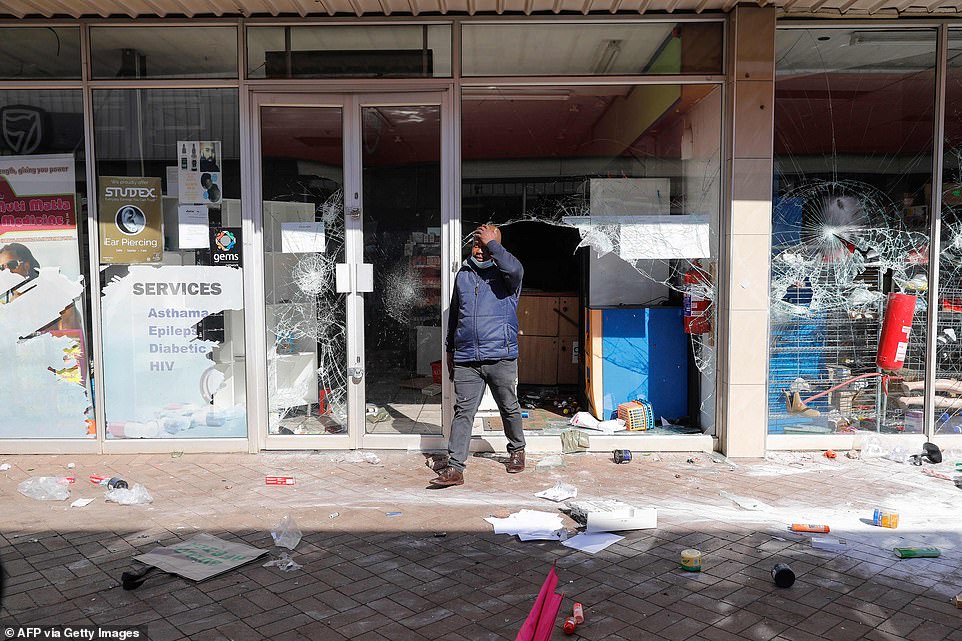 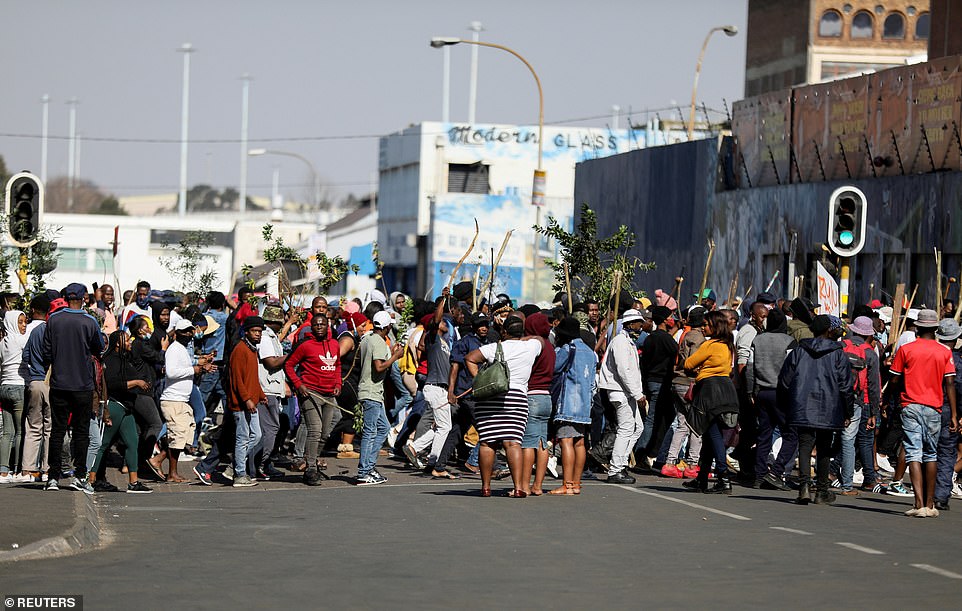 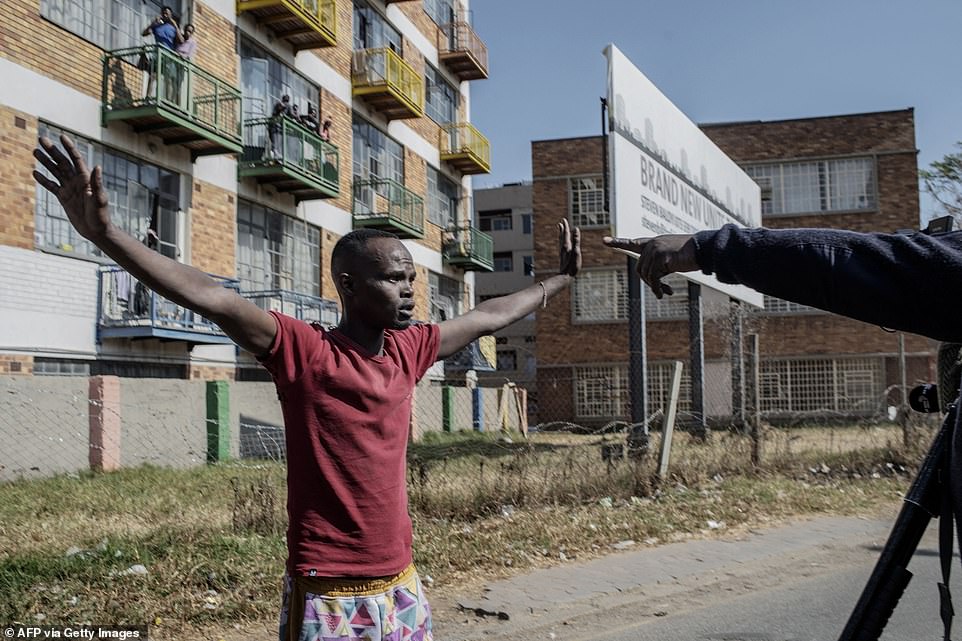 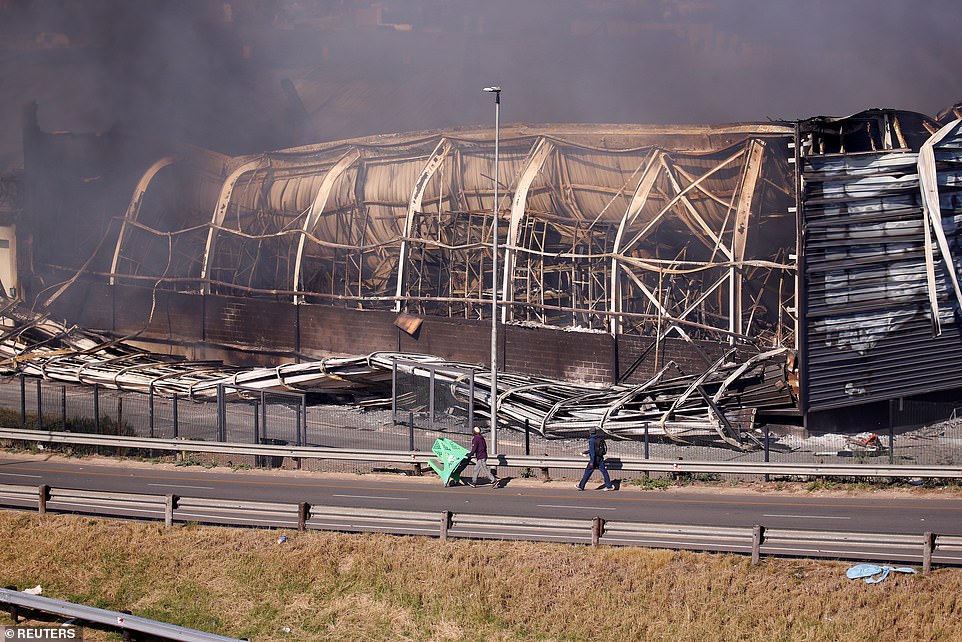 A shopping centre in the city of Pietermaritzburg, South Africa, smoulders on Monday morning as looters carry away goods amid violent protests over the jailing of Jacob Zuma 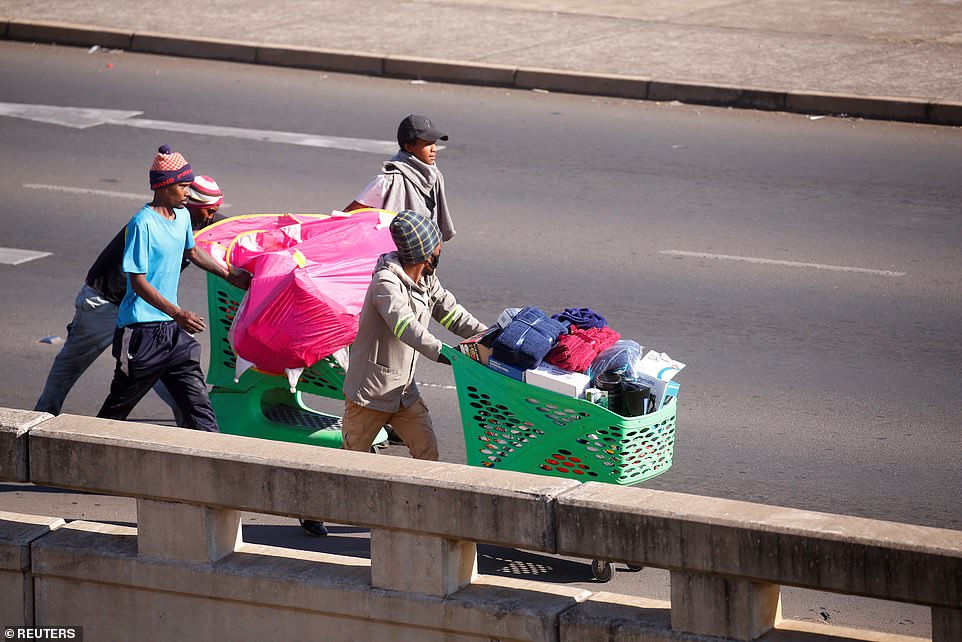 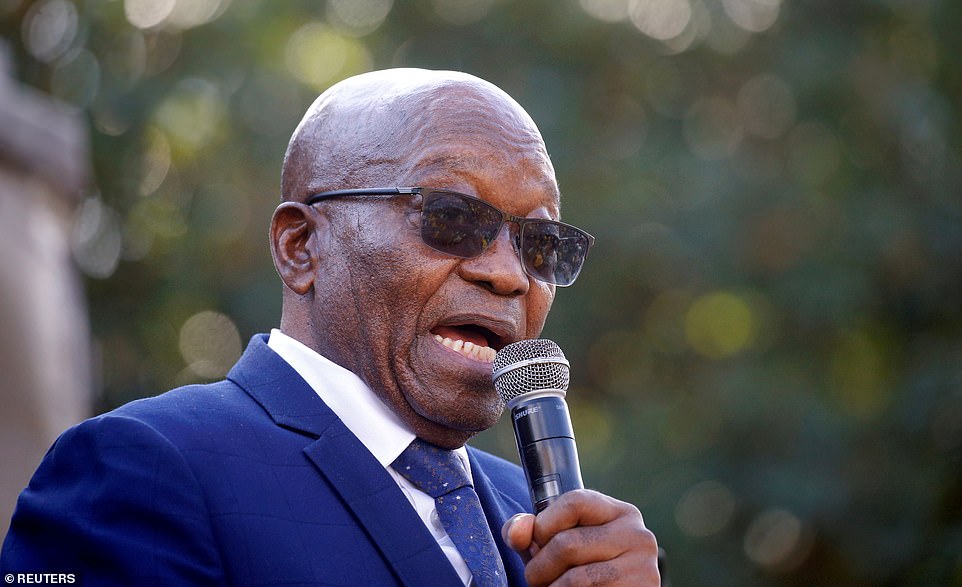 Jacob Zuma is embroiled in a corruption investigation and court case over his time as president, but remains popular among poorer South Africans who have been demonstrating in support of him

Protesters have blockaded roads with burning tires, burned buildings, set off explosions and fired gunshots in townships across the province.

On Monday, flames could be seen coming from the roof of a shopping centre in provincial capital Pietermaritzburg as hordes of people rushed in to loot.

Shortly afterwards, troops appeared in the streets and the military confirmed that it had been asked to deploy to restore order.

The armed forces said it was also deploying in neighbouring Guateng state, where violence also spread at the weekend.

‘The South African National Defence Force (SANDF) has commenced with pre-deployment processes and procedures in line with a request for assistance,’ the military said in a statement.

Personnel will ‘assist law enforcement agencies deployed in Gauteng and KwaZulu-Natal provinces respectively to quell the unrest that has gripped both Provinces in the last few days,’ it said.

In Eshowe, a town near Zuma’s Nkandla home, police opened fire to disperse crowds after a supermarket was ransacked early on Monday.

Police said some sections of a major road in Johannesburg had been closed because of the protests. Dozens have been arrested.

President Ramaphosa urged ‘peaceful protest’ during a speech on Sunday.

‘While there are those who may be hurt and angry at this moment, there can never be any justification for such violent, destructive and disruptive actions,’ he said.

Zuma’s jailing marks a significant fall for an important figure in the liberation-movement-turned ruling party, the African National Congress (ANC).

He was once jailed by South Africa’s white minority rulers for his efforts to make all citizens equal before the law.

Zuma and the Gupta brothers, who fled after his ouster and are believed to be living in Dubai, deny wrongdoing.

Zuma is also facing a corruption trial relating to a $2.5billion arms deal in 1999 when he was deputy president. He denies the charges in that case. 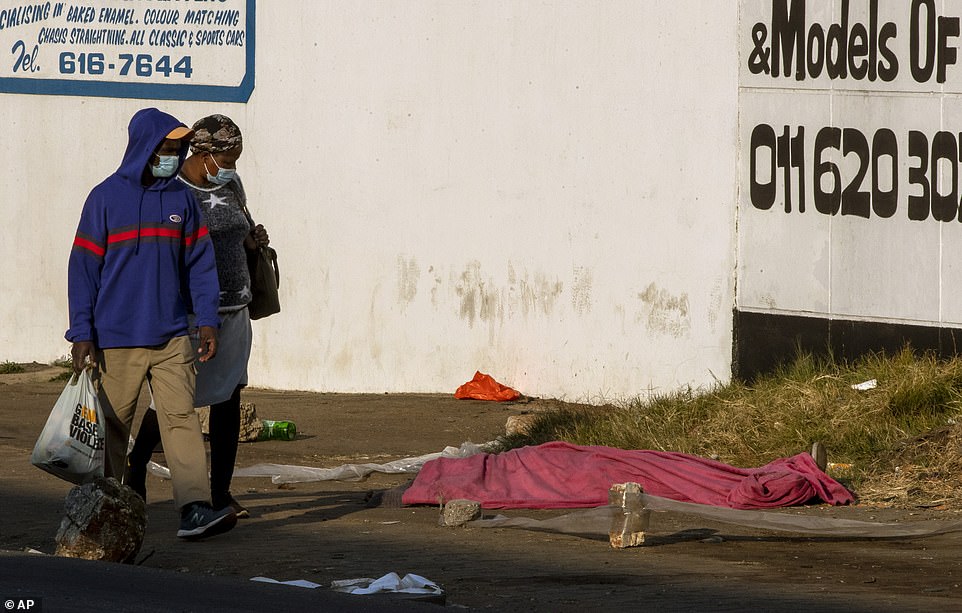 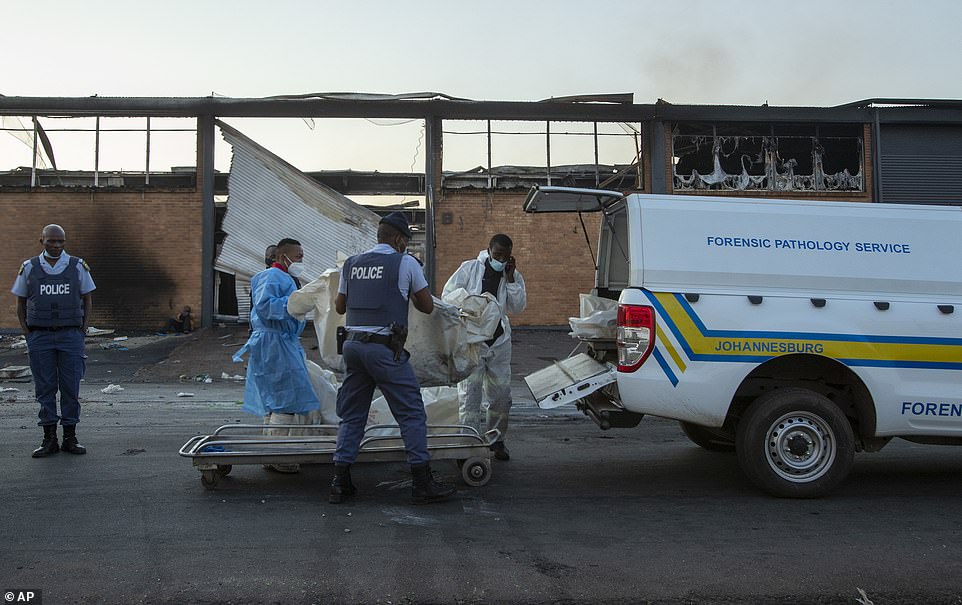 Police load bodies of two men that were found inside a burned shop in Johannesburg, South Africa, into an ambulance 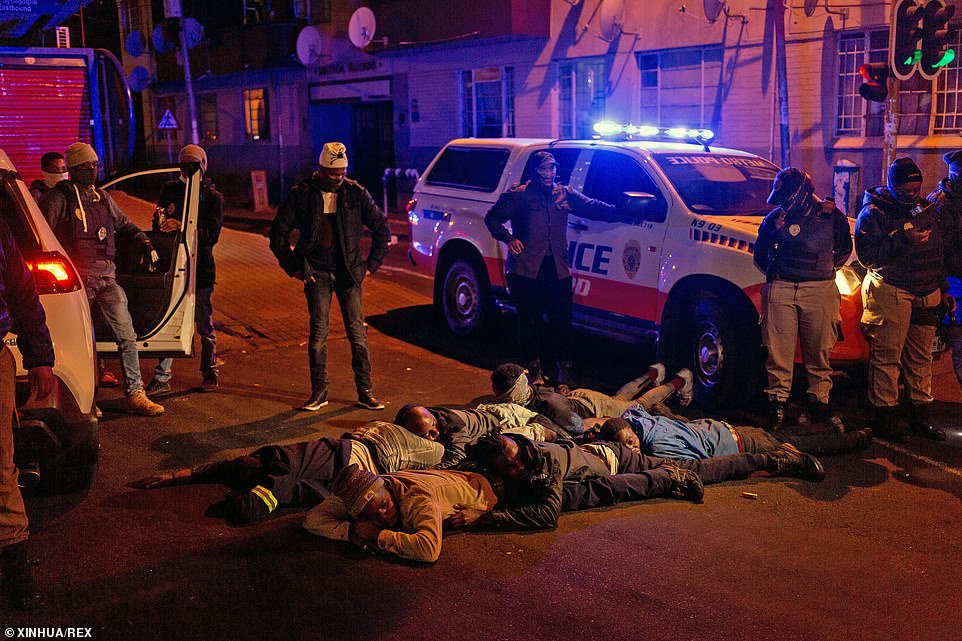 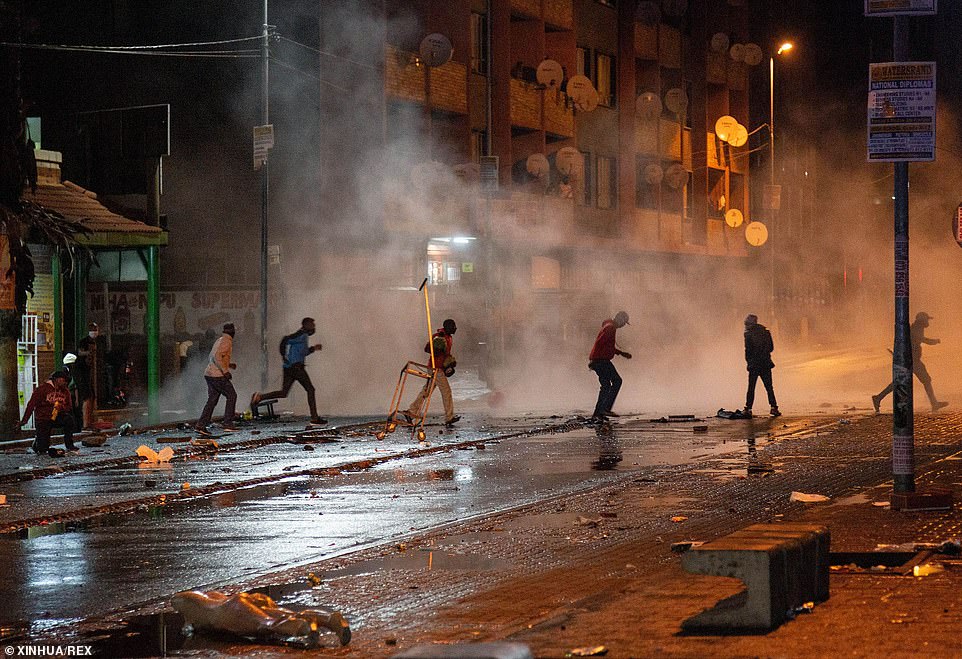 Protesters run away from tear gas canisters fired at them by police in Johannesburg, South Africa, overnight Sunday 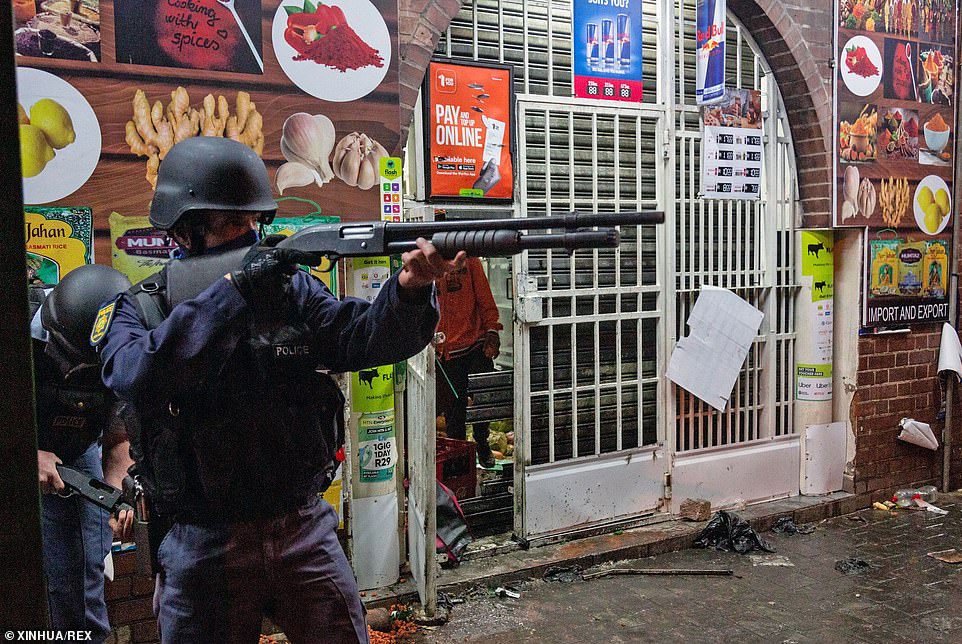 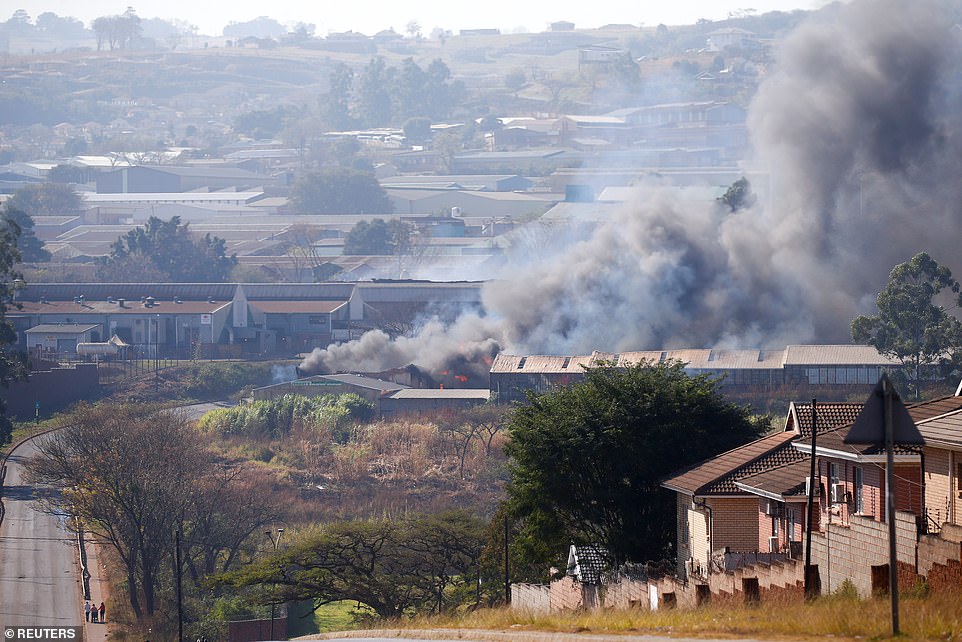 EURO 2020 PLAY-OFFS ROUND-UP: Erling Haaland will NOT be at the Euros next summer after Norway lose