By Associated Press and Melissa Koenig For Dailymail.Com

Six National Guard soldiers were sent to the hospital for observation after experiencing heat-related issues during a training march at a military training school in Connecticut.

Major Dave Pytlik with the Connecticut National Guard said the soldiers were among several dozen participating this week in officer training at the Guard’s Stone’s Ranch Military Reservation in East Lyme.

Monday is known as ‘ruck march’ day, where the soldiers carry 35-pound backpacks on a rigorous six-mile training hike, he said.

Pytlik said medical personnel, including a doctor, were on hand as part of precautions for the early morning march and responded appropriately to treat those suffering dehydration and other heat-related symptoms at around 7.30am.

Fire and EMS crews from multiple surrounding towns were called to the reservation at 7.41am, Mike Finkelstein, the town’s emergency management director told the Middletown Press. 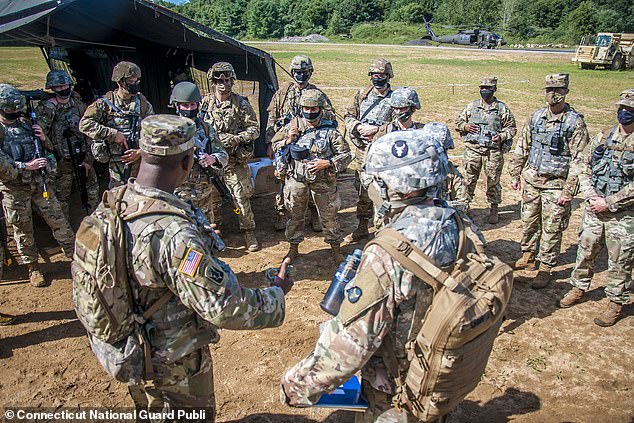 Six soldiers training to be officers in the National Guard, like the ones seen here, were hospitalized Monday with heat-related illnesses after carrying large backpacks on a march 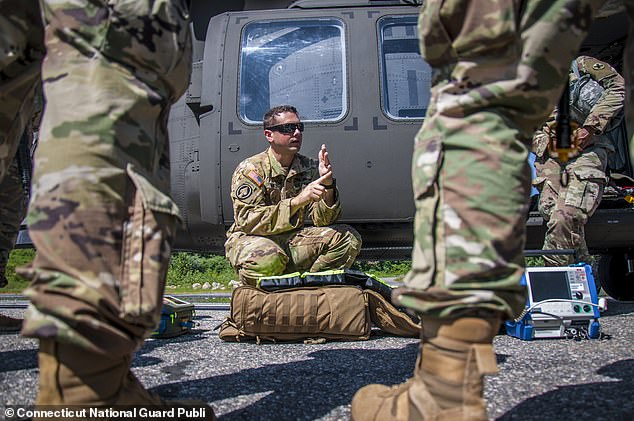 Officials say medical staff, like the medic seen here, was on site as a precaution on Monday and responded to the scene immediately

A doctor on the scene recommended that the soldiers be sent to a local hospital as a precaution.

Pytlik said the six soldiers were taken to Lawrence + Memorial Hospital in New London for observation, but nobody was seriously injured.

Pytlik told DailyMail.com he expects all the soldiers to be released soon. 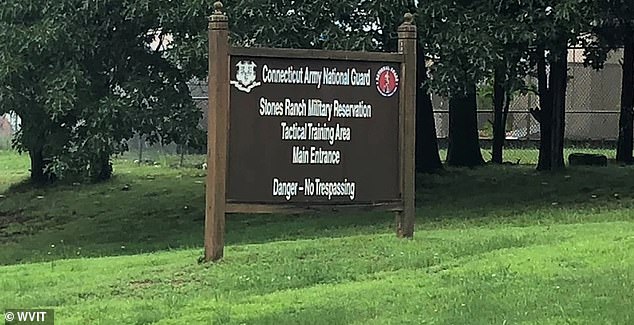 ‘This is pretty typical during this event,” he said. ‘Unfortunately, it’s just one of the common parts of soldiering.’

He added that it was around 75-degrees when the soldiers were participating in the ruck march, and was very humid, as the reservation is located right near a lake.

‘They’re carrying weight on their backs so it heats you up really quickly,’ Pytlik told DailyMail.com.

The military training school typically trains between 60 and 100 candidates from National Guard units across the Northeast.

‘These are all soldiers who are vying for the opportunity to become commissioned officers,’ he said.

Shy teen Gavin Hubbard led his school boy's weightlifting team to glory long before most of...