Socialite John Rendall who famously bought a lion from Harrods’ pet department in the 1960s, called it Christian and took it on walks around London has died aged 76.

The Chelsea-based Australian became well known after he and his friend Anthony ‘Ace’ Bourke purchased a lion cub from the exclusive department store in Knightsbridge, which traded in exotic animals at the time.

Christian was a regular sight in Chelsea as he was taken for walks along King’s Road by the conservationist – with Mr Rendall and Mr Bourke both also seen driving the big cat around in their Mercedes cabriolet.

Christian, who was bought for 250 guineas, was fed steak and taken to restaurants and glamorous parties – but later returned to the wild in Kenya after growing out of Mr Rendall’s furniture store, Sophisticat.

Mr Rendall became a dedicated conservationist thereafter and an extraordinary video of the lion recognising his old master and bounding up to him for a hug has attracted 14million views on YouTube.

Mr Rendall, who had a decade-long marriage with TV personality Liz Brewer, was found dead at his desk on Sunday by his distraught son Maximillian, a magician who is his child from his second marriage, Melanie. 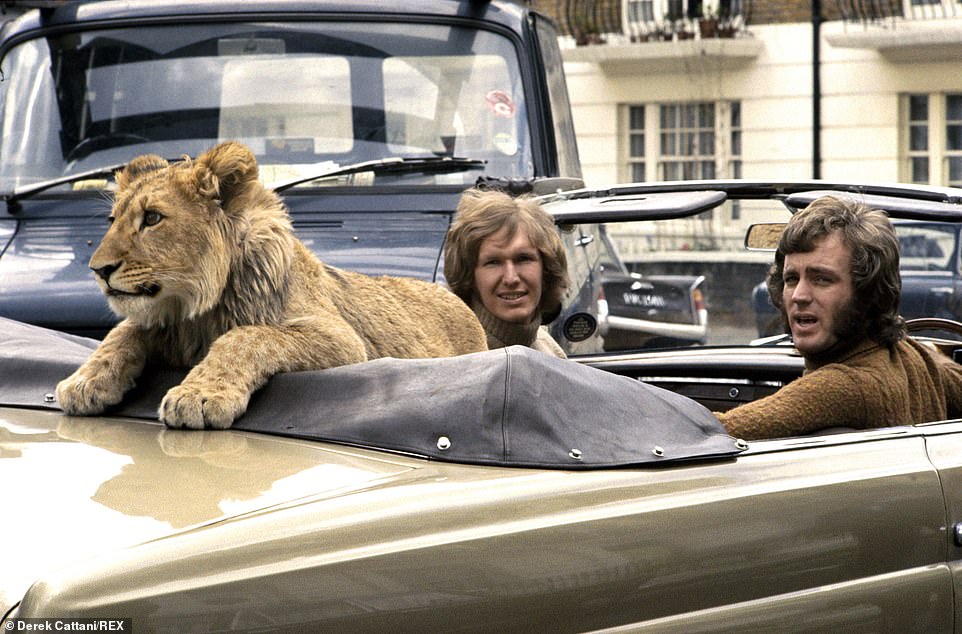 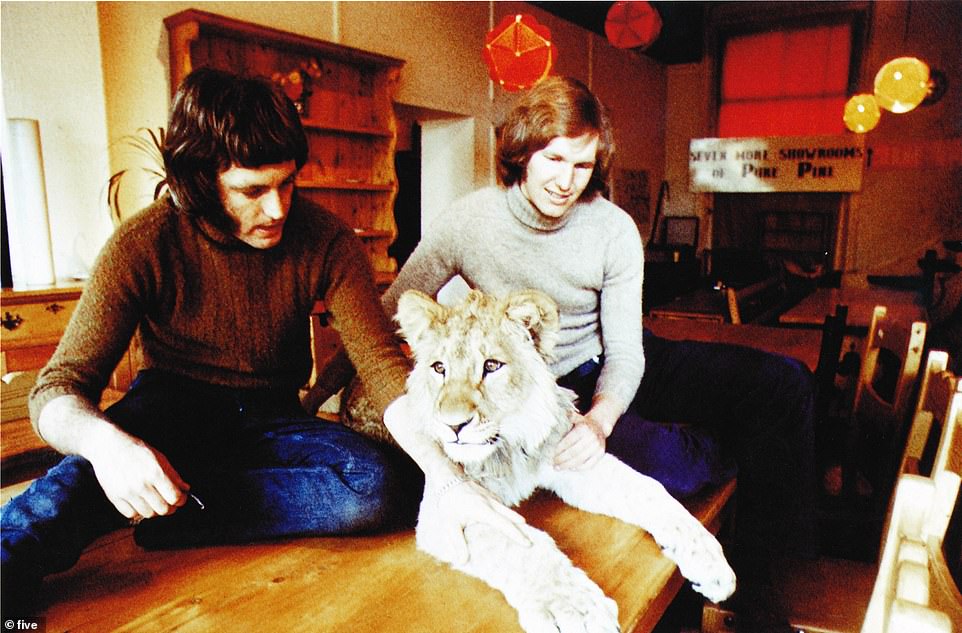 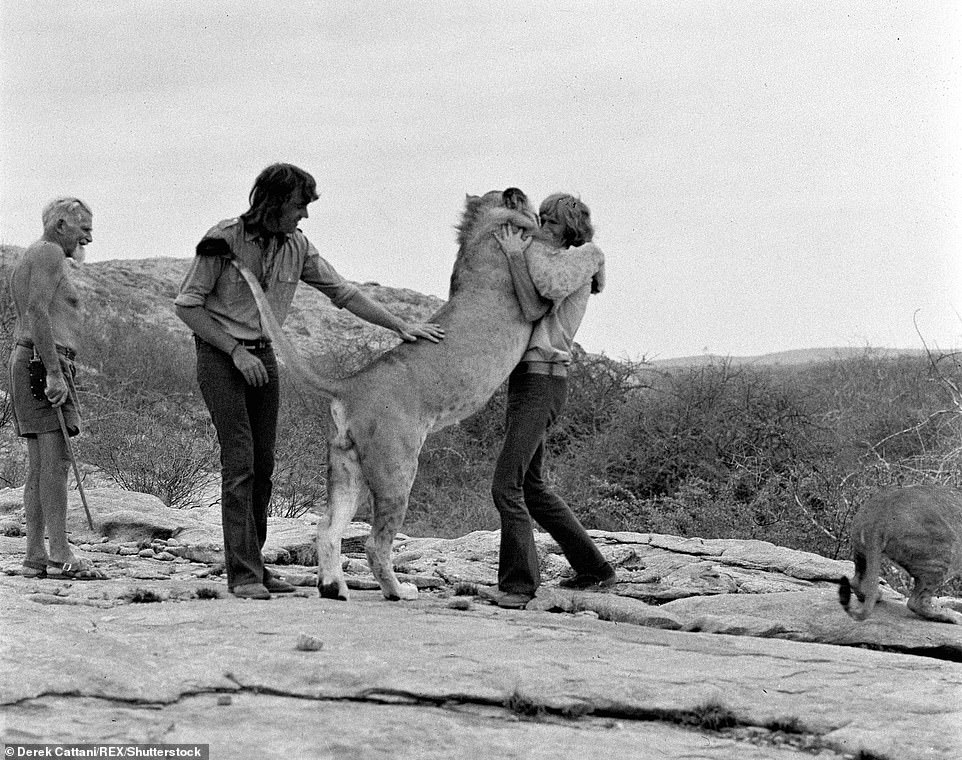 Ms Brewer, the Ladette To Lady etiquette adviser, told the Daily Mail: ‘The reason I married John (and I was on my sixth fiance) was because of the wonderful relationship he had with animals and people.’

‘I just knew he would be a fabulous father. My daughter Tallulah has a great deal of John in her.’

How the Harrods pet shop sold alligators, lions and a baby elephant to Reagan

The Harrods Pet Kingdom was once the place to buy panthers, tigers and camels and even caught the fancy of Ronald Reagan, who rang up for a baby elephant.

The London department store’s pet section opened in 1917, and rivalled London zoo with a vast array of animals which it sold for more than 50 years until most were outlawed by the 1976 Endangered Species Act.

The playwright Noël Coward was one of its more famous customers, having an alligator bought for him for Christmas in 1951 by the Canadian actress Beatrice Lillie.

And in 1969, John Rendall and Anthony Bourke bought Christian the lion for 250 guineas, who outgrew their flat in Chelsea and had to be released into the wild in Kenya.

But the most famous purchase came in 1967 when future US president Ronald Reagan, then the governor of California, rang up to buy a baby elephant called Gertie.

Legend has it the shop worker on the other end of the phone said: ‘Would that be African or Indian, sir?’

Less than a decade later, the Endangered Species Act put a halt to most of the department’s more exotic sales.

But it maintained a good trade in hamsters, rabbits, cats and pedigree dogs until recently when it was closed in 2014 and replaced with a womenswear section.

The world-famous store was once owned by billionaire Mohammed Al Fayed, but was bought out by the Qatari royal family’s fund Qatar Holding in 2010 – becoming only the fifth owner since it was founded.

Mr Rendall had two sons with Melanie, and Ms Brewer said: ‘It is very said that his sons from his second marriage and Tallulah have lost their father so young.’

She added: ‘We had such a beautiful relationship with him. Christian changed the path of our lives.’

Writing in the Daily Mail in 2013, Mr Rendall revealed he had been working in London in the 1960s when he and Mr Bourke learned that that Harrods was selling exotic animals.

He said the store had previously supplied a baby Indian elephant called Gertie to the son of the exiled King of Albania – who in turn gave it to Ronald Reagan, who was then governor of California.

Mr Rendall said he and Mr Bourke visited the store and were ‘astonished to discover there were two lion cubs for sale – and we found the male utterly irresistible’.

Mr Rendall added: ‘We had the crazy idea that if we bought him, we could offer him something better than his life at a department store, even if it were only for a few months.’

They took him back to their flat on King’s Road above the furniture store Sophisticat and he lived with them there for a year, ‘growing rapidly and costing us a fortune in food’.

Visitors to the shop included actors George Lazenby, Diana Rigg and Mia Farrow, but Mr Rendall said it was- Bill Travers and his wife Virginia McKenna who decided Christian’s fate.

They were the stars of Born Free, the story of famous wildlife conservationists Joy and George Adamson – and told them that rather than send Christian to Longleat Wildlife Park in Wiltshire as they had planned, the friends should send him to Africa, where Mr Adamson would try to release him into the wild.

However, they were extremely concerned about this given that Christian was a fifth generation zoo­bred lion, and sending such a creature into the wild had never been done before.

In 1970, they flew with Christian to Kenya and travelled to the Kora Reserve which Mr Adamson had rented for £750 a year – a space that is now a national park.

Mr Rendall wrote: ‘To release Christian into the wild was a huge step, but against all expectations it was a success. From the beginning, George became infatuated with him because he was such an entrancing animal. 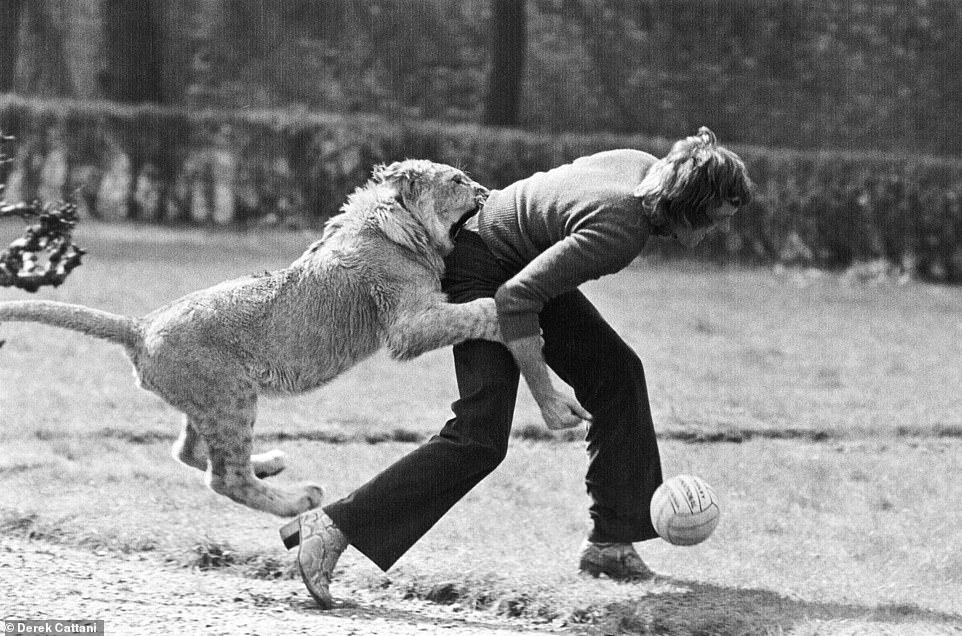 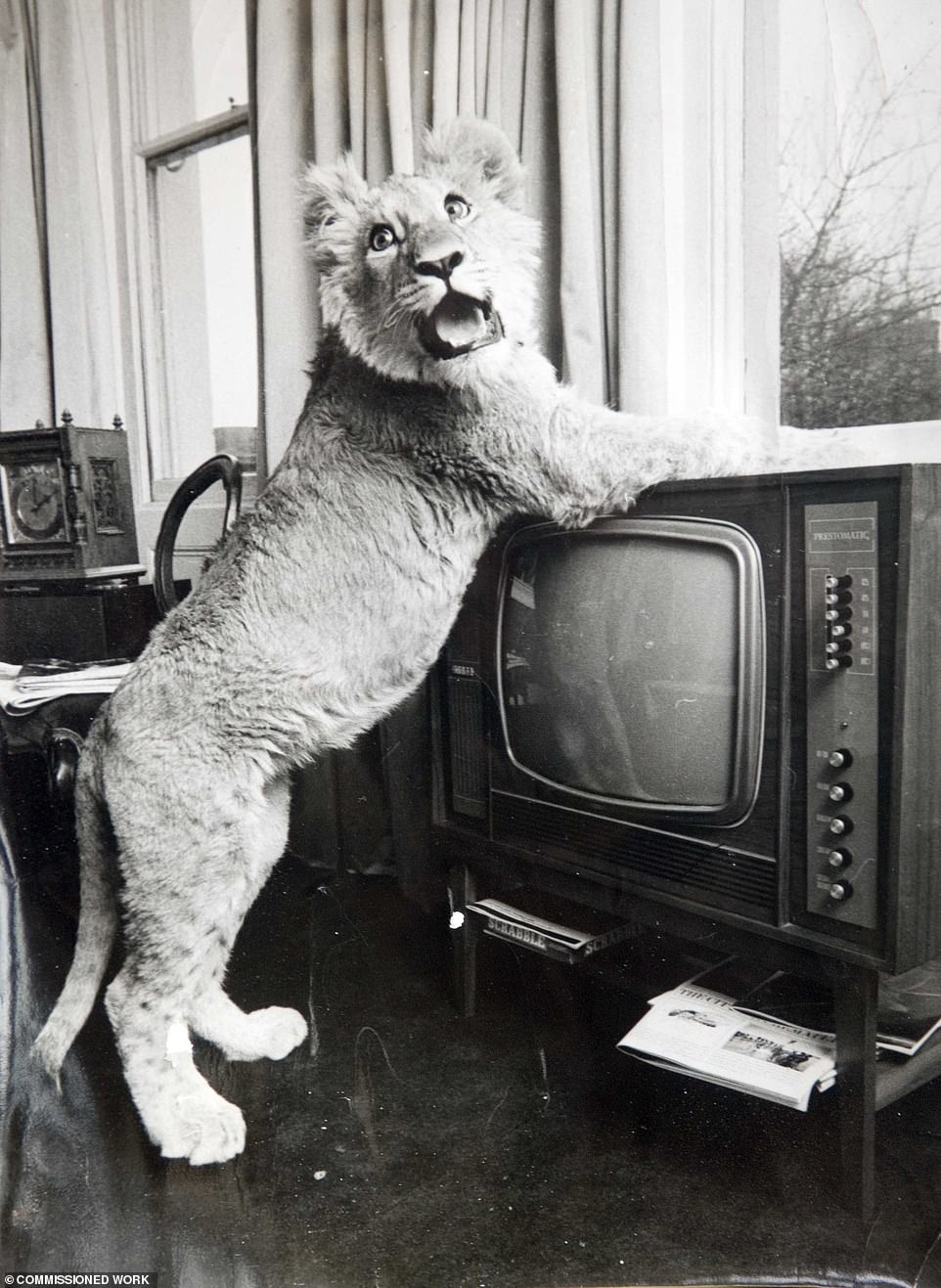 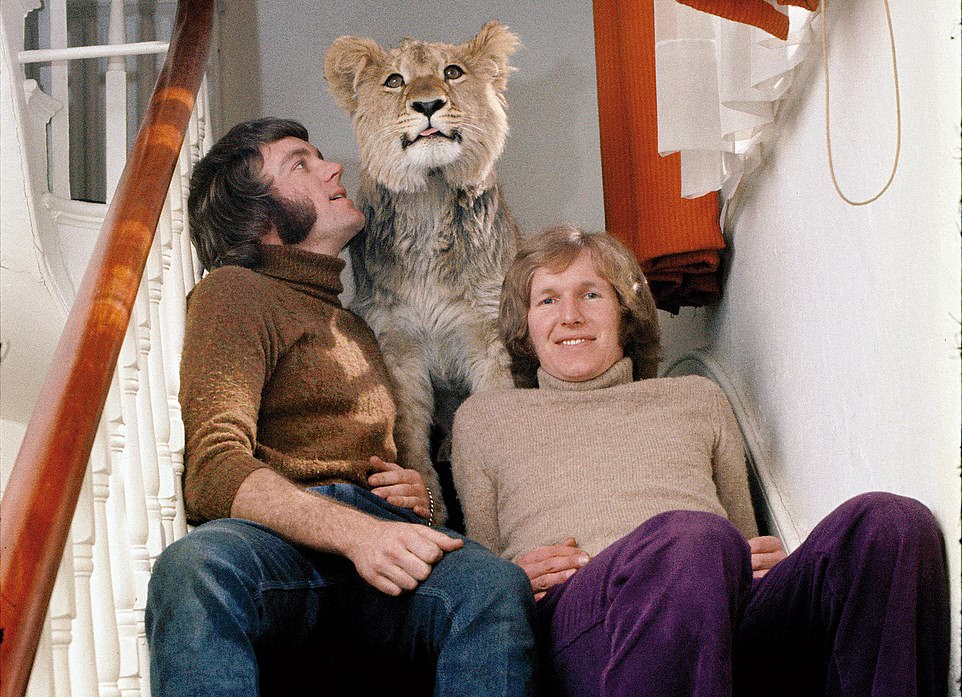 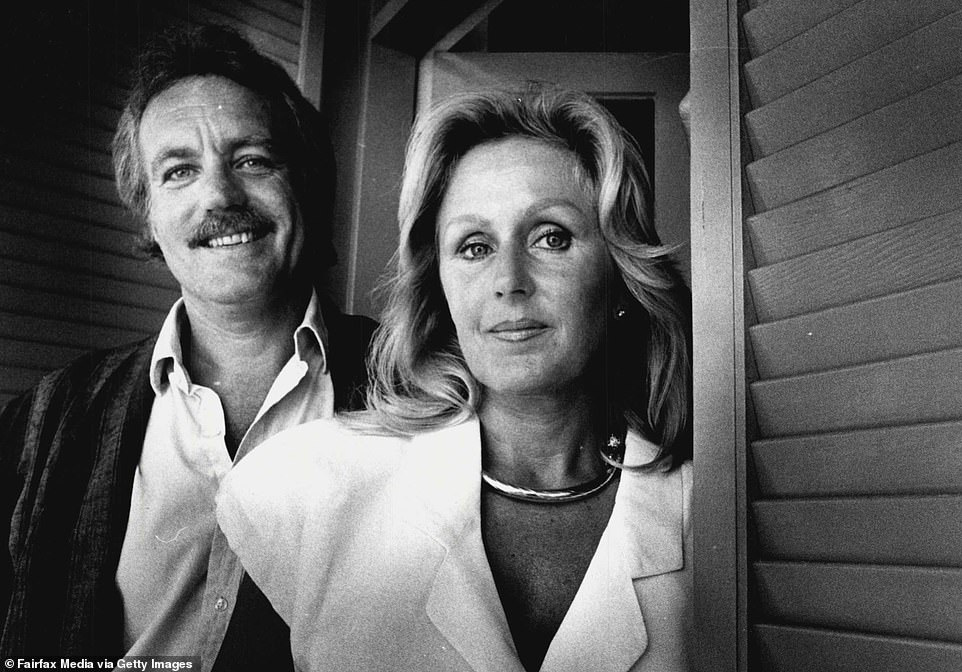 Mr Rendall had a decade-long marriage with TV personality Liz Brewer. They are pictured together in January 1987

‘It was almost as if he didn’t have a vicious bone in his body. To help Christian’s rehabilitation, George created a pride around him, headed by Boy, one of the lions who had been used in Born Free.’

One year after taking Christian out to Kenya, Mr Rendall and Mr Bourke flew back to the country in the hope of meeting Christian again – with wildlife cameraman Simon Trevor joining them to film the reunion, and the resulting documentary covering the costs of their travel.

The video was then rediscovered in 2008 by a young American girl who saw it on an obscure Japanese blog, who posted it on YouTube where a young English actor, Marc Bolton, saw it and added subtitles and Whitney Houston’s song I Will Always Love You.

Speaking about the video, Mr Rendall said: ‘Adults seem to find it very difficult to watch without crying. It summons up all the pain of separation and loss, and the joy of being reunited.

‘It’s interesting that children don’t cry at the clip because, hopefully, they’ve never had to experience separation like that. When they see the film, they just say: ‘Oh, fantastic!’

‘When I go to schools to talk about conservation and show the clip, the children are cheering and saying: ‘Oh, isn’t he great, isn’t he fabulous?’ Then I look up and see that the headteacher is in tears.

‘One of the extraordinary things about the reunion is that Christian introduces us to his two lionesses. They were never tame and George was amazed that they also accepted us.’

Christian disappeared into the wild late in 1973 when he was three-and­a-half, with neither Mr Adamson nor his assistant Tony Fitzjohn even seeing him again, although they said they occasionally heard his roar.

They believe he headed for the adjoining Meru National Park, where it would have been easier for him to establish his own pride.

Mr Adamson and Mr Fitzjohn rehabilitated 23 more lions over the next 18 years, but Mr Adamson was tragically murdered by Somali bandits in 1989.

Mr Rendall spent the rest of his life regularly visited Africa as part of his conservation work, and said: ‘The journey that Christian took me on when he brought me to Africa has been an extraordinary one. It came as the most wonderful surprise, and it’s something I never get sick of. I never tire of showing people Africa.’