Solskjaer: Manchester United paid the price for lack of focus and defensive mistakes against Young Boys 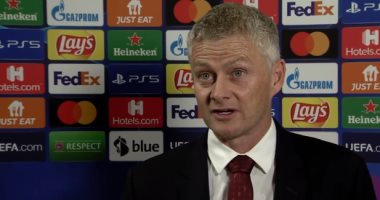 The Norwegian Ole Gunnar Solskjaer, coach of Manchester United, confirmed that the lack of focus and defensive errors were behind the 2-1 loss against the Swiss team Young Boys, in the match that brought the two teams together at the “Suis Wankdorf” stadium, in the first round of Group F of the Champions League. For the current season 2021-2022.

Solskjaer said after the end of the match: “When you lose your focus and make many mistakes, you will be punished, which is what happened in tonight’s match, as we did last season against the Turkish team Basaksehir.”

On the substitution of Ronaldo and Bruno, the United coach said: “We reached the 70th minute, and the two players made a great effort on Saturday and today on artificial turf, and we also wanted to use Matic’s experience in keeping the ball and the vitality of Lingard.”

Solskjaer spoke about Bissaka’s expulsion, saying: “The pitch played a role. Bissaka received the ball with difficulty. He reached the ball but could not control and continued his intervention. It is difficult to criticize the referee’s decision, but Bissaka did not interfere with the player’s ankle, but rather on the top of his foot.” .