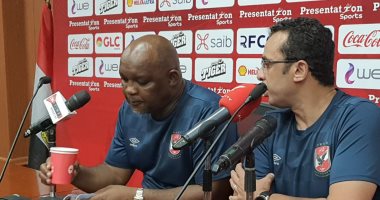 South African press reports revealed that Pitso Mosimane, coach of the first football team in Al-Ahly Club, rejected the decision issued by the Red Castle administration to fine the technical and administrative staff and players with a value equivalent to 300,000 pounds due to the failure in the Egyptian Super match in favor of the Vanguard of the Army team.

According to the South African newspaper, Soccer, Musimani refused to impose any penalties on him or any of the team’s technical staff during the current period.

The report said that Musimani showed an angry reaction to the decision of the president of Al-Ahly club to fine him 300,000 pounds (approximately 20 thousand dollars) after losing the Super match against the Vanguard of the Army on penalties.

He pointed out that Musimani refuses the fine, and considers it a great exaggeration, and he has informed Al-Ahly management of this.

In a related context, Al-Ahly club officials decided to deduct three hundred thousand pounds from each player in the first team, and a similar deduction from the football director and each member of the technical staff, based on the club’s constants and in light of the great support that is provided to the first football team system to achieve the ambitions of Al-Ahly and its fans.

Al-Ahly officials also decided to take some other measures in the same direction until each element returns to provide the return that the club and its fans deserve.