‘I don’t think any of us would like an arm flush in our face’: Steve Cooper stands by Andre Ayew after Gary Rowett criticises Swansea striker in victory over Millwall

But one of the game’s main talking points came in the 58th-minute when Ayew screamed in agony as he went down in an off-the-ball incident with Lions defender Jake Cooper. 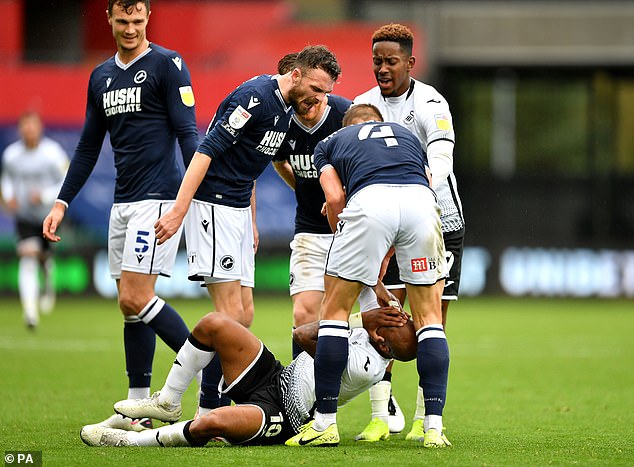 Rowett said: ‘I’ve watched it back. They thought it was a blatant elbow, but as he goes across Coops he runs into his arm.

‘There is no place for that in that game. I thought it was pretty embarrassing. There wasn’t a mark on him.’

Steve Cooper, however, was quick to defend Ayew, although he did not accuse his Millwall namesake of striking his player intentionally.

‘I’ve seen it back, and he’s definitely caught him,’ Cooper said.

‘I don’t think any of us would like an arm flush in our face. Whether it’s intentional or not I don’t know.’

Cooper revealed that Sweden winger Kristoffer Peterson had been withdrawn from the squad after he had been messaged by the club’s chief executive Julian Winter.

Peterson is poised to join German side Fortuna Dusseldorf for around £400,000, plus add-ons. 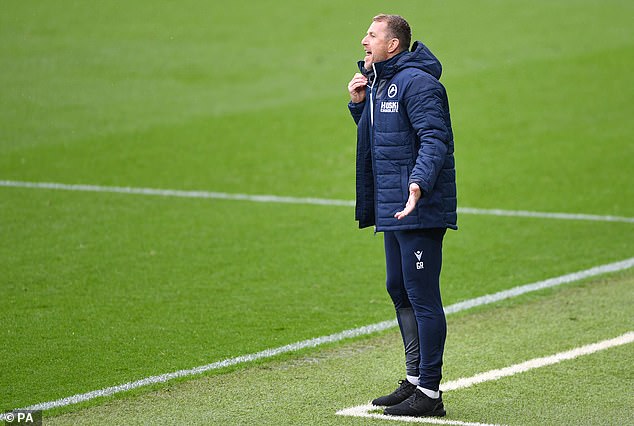 ‘I didn’t want to lose anybody, We’re going into the busiest Championship schedule ever,’ Cooper said.

‘I had a message off Julian Winter this morning to ask for him not to be involved.

‘He was in the squad and would probably have been on the bench, and that’s as much as I know about it.’

On the game, Cooper added: ‘We are a young side but I thought we came of age. You have to stand up to be counted when you play Millwall and I thought we did that.

‘I told the players before the game that these are the kind of matches that we have to win if we are serious about what we are doing this season. Now we just need to keep going.’

Rowett, who confirmed that on-loan Tottenham striker Troy Parrott will be out for five to six weeks with ankle damage, felt Millwall merited a draw after Tom Bradshaw’s equaliser.

‘I think we did enough to get a point and we should have had a penalty in the 90th minute.

‘It’s a bit of a cop-out from the referee because it was the most blatant penalty you’ll see.

‘There’s a lot of pulling going on and their player grabs Shaun Hutchinson and wrestles him to the floor. But the referee said the ball had not come in play.’