Nations such as Serbia, Croatia and Bosnia and Herzegovina had closed schools and offices, limited gatherings and implemented stay-at-home orders before cases began rapidly spreading across the continent, the Centers of Disease Control and Prevention (CDC) revealed on Tuesday.

Meanwhile countries such as the UK, Belarus and Luxembourg implanted few to no restrictions, allowing infections to spread relatively unchecked.

What’s more, the CDC found that sterner restrictions in most European countries could have led at least 74,000 fewer deaths – mostly in the UK, France and Spain. 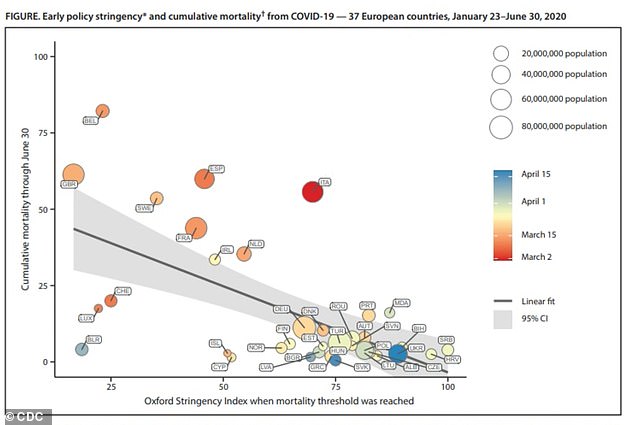 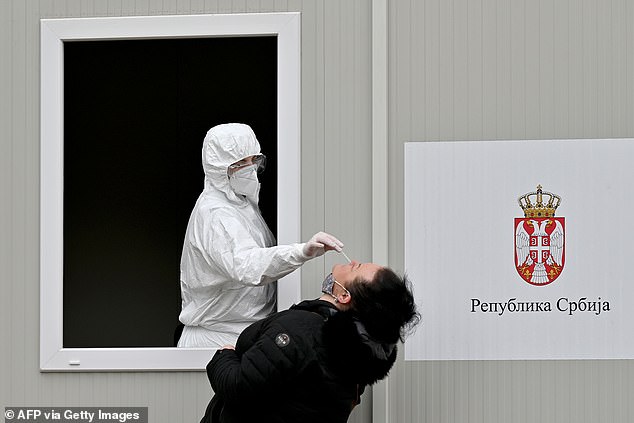 On a score from one to 100, based on measures and the date each country hit 0.02 new COVID-19 deaths per 100,000 people, Serbia had the best score of 100. Pictured: A medical worker takes a sample with a swab from a woman during a coronavirus test at the Institute of Virology, Vaccines and Sera Torlak in Belgrade, Serbia, December 24 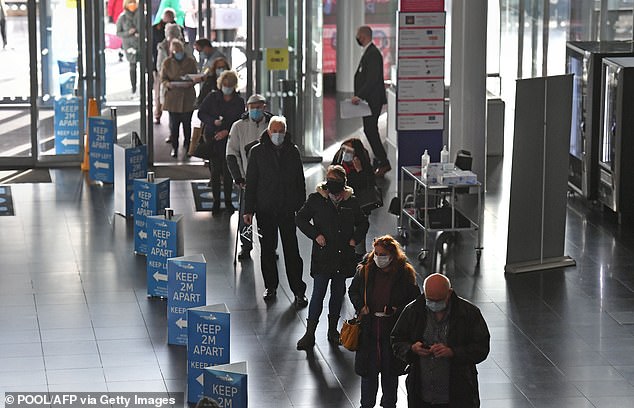 The UK had the worst score of 16.7, having implemented only two measures when the mortality threshold was hit on March 16. Pictured: Members of the public queue for a COVID-19 vaccine at the NHS vaccine center that has been set up a in Birmingham, England, January 11

For the study, published in the CDC’s weekly MMWR report, the team looked at data from 37 European countries through June 30.

Data on which mitigation policies were implemented were obtained from the CDC COVID-19 International Taskforce.

Each country was given a score from one to 100 based on the University of Oxford’s Stringency Index (OSI), which looks at whether or not a country adopted nine mitigation policies.

Mask mandates and requirements were not included  in the index.

Each country’s final OSI score was calculated on the day it reached a defined threshold of daily mortality from COVID-19, which was 0.02 new COVID-19 deaths per 100,000 people.

The most common policy implemented was the cancellation of public events, which was done by 95 percent of the 37 countries.

This was closely followed by school closures (89 percent) and restrictions on gatherings of 10 or more people (84 percent).

Serbia was the country with the highest score, of 100, having followed every measure aside from recommendations to stay at home.

Despite recording more than 300,000 cases since the pandemic began, Serbia is one of the few European countries that has opened its ski centers to the public. 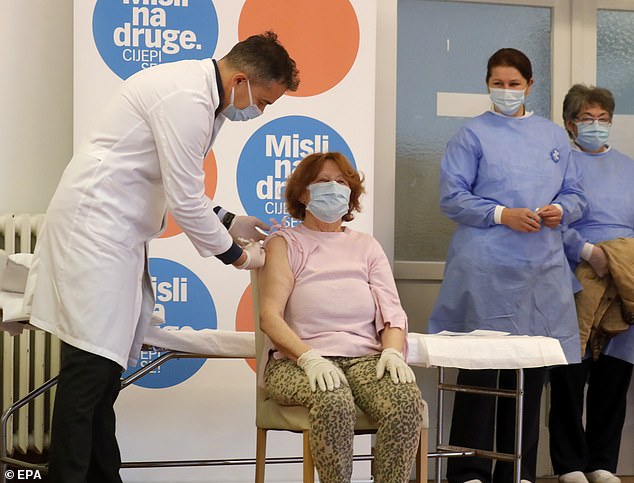 The UK had the worst score at 16.7 have only followed two measures – workplace closures and recommendations to stay home – when it reached its mortality threshold on March 16.

Currently, cases in the UK have increased by more than 100 percent over the last month, and one in 30 Londoners is infected with COVID-19, according to Mayor Sadiq Khan.

In total, 26 countries had scores below 80. For these nations, the CDC ran scenarios that estimated how many lives would have been saved if their score had been 80.

Researchers determined that if each of the 26 countries had an OSI score of 80 when they reached their morality threshold, they would have 74,139 fewer deaths 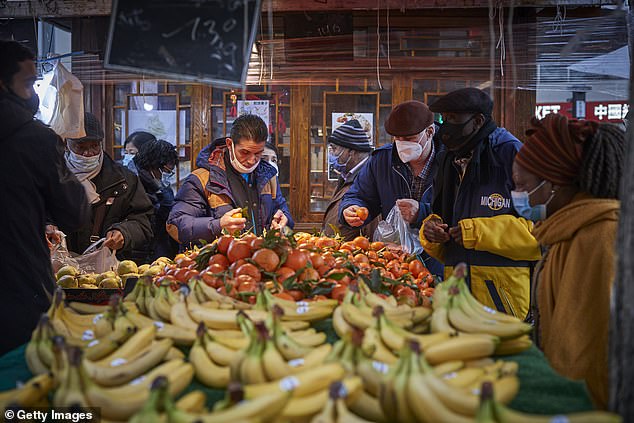 CDC researchers found European countries could have averted 74,000 deaths with the majority of those in the UK with 22,776 fewer deaths, France at 13,365 and Spain at 9,346. Pictured: People shop in an open air market as the French Government continues to try to contain the coronavirus in Paris, France, January 12

‘European countries that implemented more stringent mitigation policies by the time they reached an early mortality threshold in spring 2020 tended to report fewer COVID-19–associated deaths through the end of June,’ the authors wrote.

This follows results of similar studies such as one European report from December 2020, which found that implementing school closures and gathering bans 1one week earlier could have reduced mortality by 44 percent.

Another U.S. study from November 2020 which found that states and counties that delayed implementing measures experienced more prolonged outbreaks.

‘These findings suggest that earlier implementation, even by just a few weeks, might be important to preventing widespread transmission and large numbers of deaths,’ the CDC authors concluded.

Trump warns: my isolation will spark anger in America

Good Vibes, Good Life: How Self-Love Is the Key to Unlocking Your Greatness

For restaurant industry, bouncing back in 2021 is a tall order

Ethiopia and Sudan .. Will war break out?