Summary and goals of Hungary’s match against England in the World Cup qualifiers.. Video 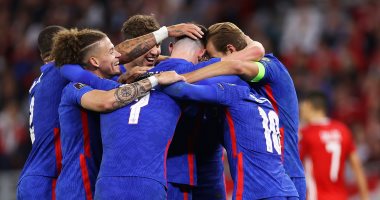 England defeated Hungary 4-0 in the match that was held on Thursday evening at the Puskas Arena, as part of the fourth round of Group 9 of the European qualifiers for the 2022 World Cup..

Raheem Sterling dedicated his goal to his late friend Stevie Gregg, who died a few days ago of being infected with the Corona virus..

The first half between the two teams ended in a goalless tie, as the three black stars could not break the defenses of Hungary, which imposed its control over the first half of the match..

With that result, the England team continues to occupy the top of Group I with 12 points from winning 4 matches, while Poland and Hungary are in the second and third places with 7 points each from two victories and a draw..

According to Opta, the global network specialized in numbers, Raheem Sterling has now directly participated in 16 goals in the last 11 qualifying matches for the European Nations Cup and World Cup (10 goals, 6 assists).

The network confirmed that star Harry Kane is now in each of his last 13 Euro/World Cup qualifiers with England, scoring 17 goals in total..

The England national team entered the match with the following formation