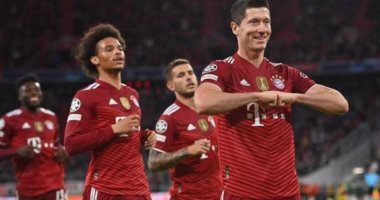 Bayern Munich won an exciting victory at the expense of its Ukrainian counterpart, Dynamo Kiev, 5-0 in the match that was held between them today, Wednesday, at the Allianz Arena, in the second round of the group stage of the Champions League for the current season 2021/2022..

Meanwhile, Dynamo Kiev is third in the Group E table, with one point, collected from a draw with Benfica in the first round, before suffering a severe loss against Bayern Munich on Wednesday evening..

Bayern Munich achieved a series of distinguished victories throughout 8 consecutive meetings, starting with the German Super Cup after defeating Borussia Dortmund 3-1 and crowning the title, then 5 German Badlory victories, in addition to defeating Barcelona by three in the opening of the Champions League campaign before adding today’s victory to the series Positive results this season.

Bayern Munich leads the German league standings with 16 points, collected from 6 matches, between 5 victories and one draw..

And according to the global network “Skawaka”, Robert Lewandowski scored in every home match he played with Bayern Munich in 2021. 26 goals in 14 matches.

While the global network “Opta” confirmed that Robert Lewandowski scored 119 goals in his last 100 games with Bayern Munich, while he scored six goals more than any other player in the five major leagues in Europe in all competitions in 2021 (41).

The Bayern Munich line-up was as follows:..

Nostalgia for the Cold War | Opinion