Summary and goals of the Portugal match against Ireland in the World Cup qualifiers.. Video 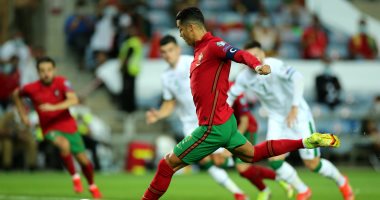 Cristiano Ronaldo led Portugal to a 2-0 victory over its guest, Ireland, in the match that brought the two teams together, on Wednesday evening, at the “Al Jarve” stadium in Faro, in the fourth round of Group A of the European qualifiers for the 2022 World Cup.

Ronaldo returned to score Portugal’s second goal in the fifth minute of stoppage time from another header, to lead his country to a valuable victory.

Portugal striker Cristiano Ronaldo received the award for top scorer in the last European Championship “Poro 2020”, before the start of the match, after he was crowned the tournament’s top scorer with 5 goals, a difference of minutes and assists from Czech player Patrick Shek..

Ireland goalkeeper Gavin Pazono saved Ronaldo’s penalty kick in the right corner in the 15th minute, to miss the first penalty kick with Portugal since the Iran match in the 2018 World Cup..

With this result, Portugal leads the group with 10 points from 4 matches, 3 points ahead of Serbia, who played 3 matches, while Ireland is in fourth place without a balance of points from 3 matches.

Portugal will face Qatar (the guest) next Saturday in an uncalculated match, and they will visit Azerbaijan on September 7.

In the same group today, Luxembourg defeated its guest, Azerbaijan, 2-1, to occupy the third place in the group with 6 points.

Tulsa gym trainer works out ways to give back to community