Swimmers have been pictured taking a dip in the world’s first transparent sky pool before it opens in London next month.

The stunning pool stands across two exclusive residential blocks standing next to the US Embassy in Nine Elms, South London and is the first of its kind in the world.

Bathers will drift through water ten storeys up and can watch passers-by far below them and gaze across the London skyline as they float.

The highly-anticipated opening will be held on Wednesday May 19 and feature radio and TV host Roman Kemp. 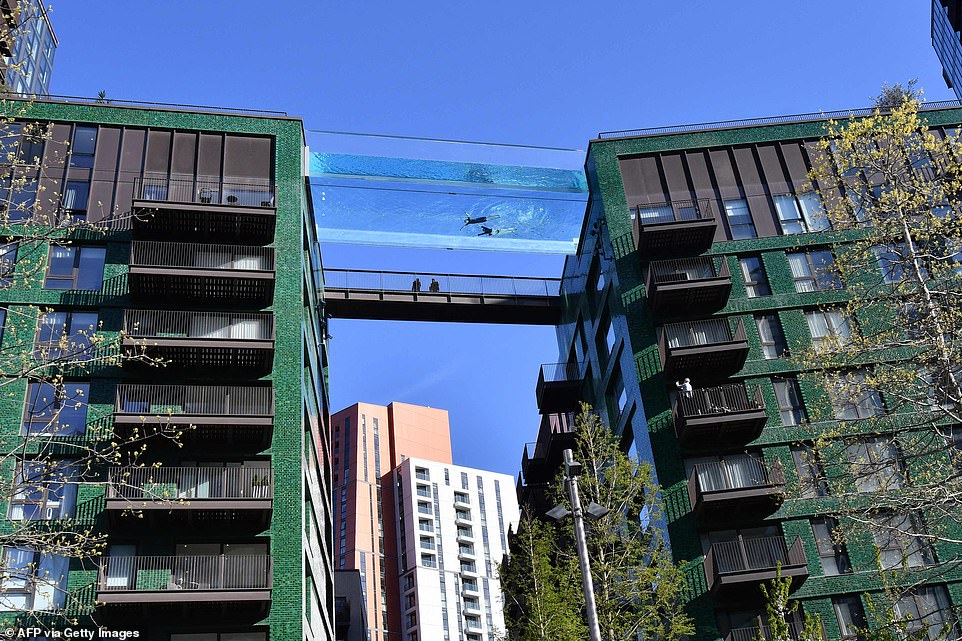 The stunning Sky Pool, which straddles two exclusive apartment blocks in Nine Elms, South London, is set to open on May 19th in a launching ceremony hosted by ex I’m a Celeb contestant Roman Kemp 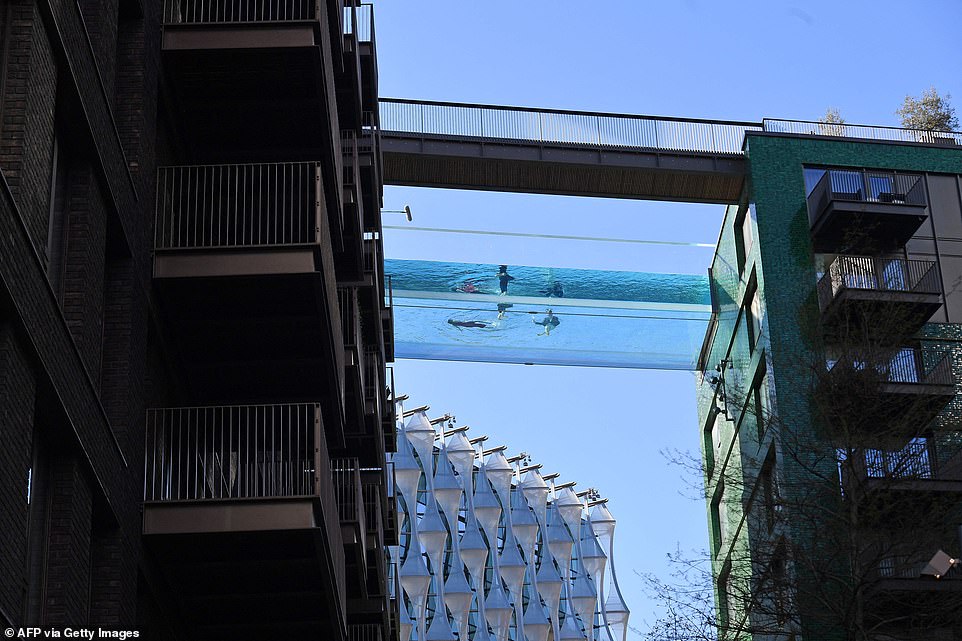 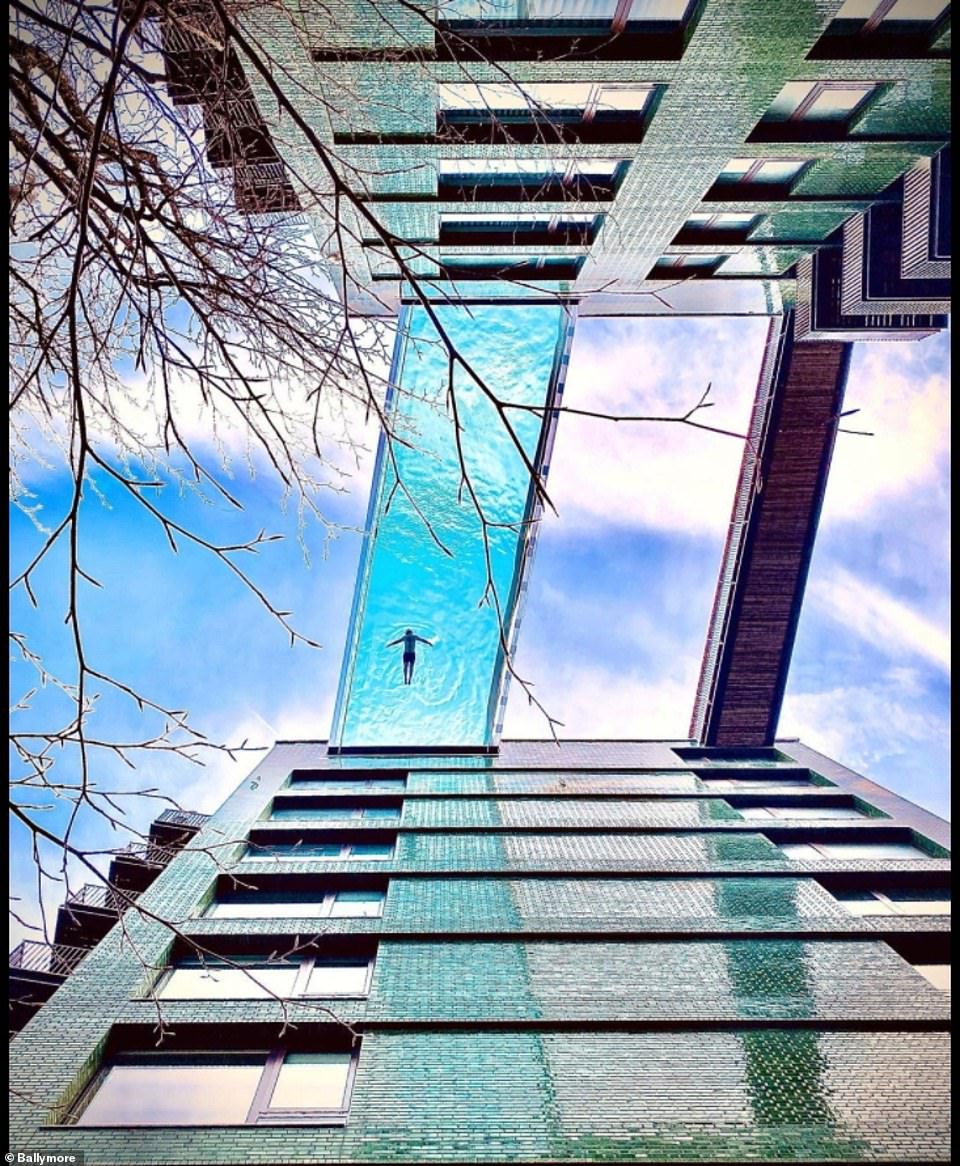 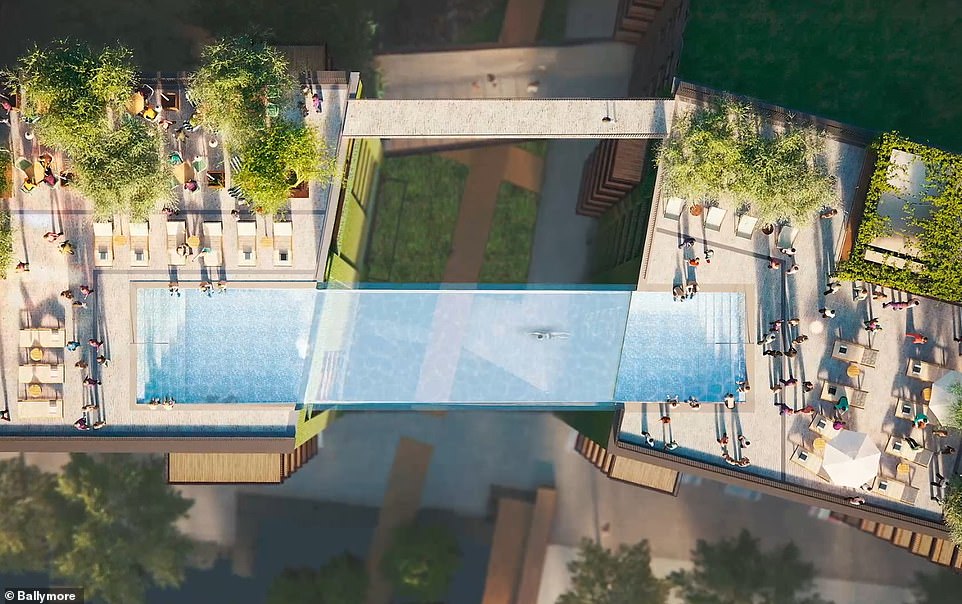 Who needs to walk when you can simply swim across to visit your neighbours? An aerial view of the pool shows residents in the two blocks can now swim between buildings 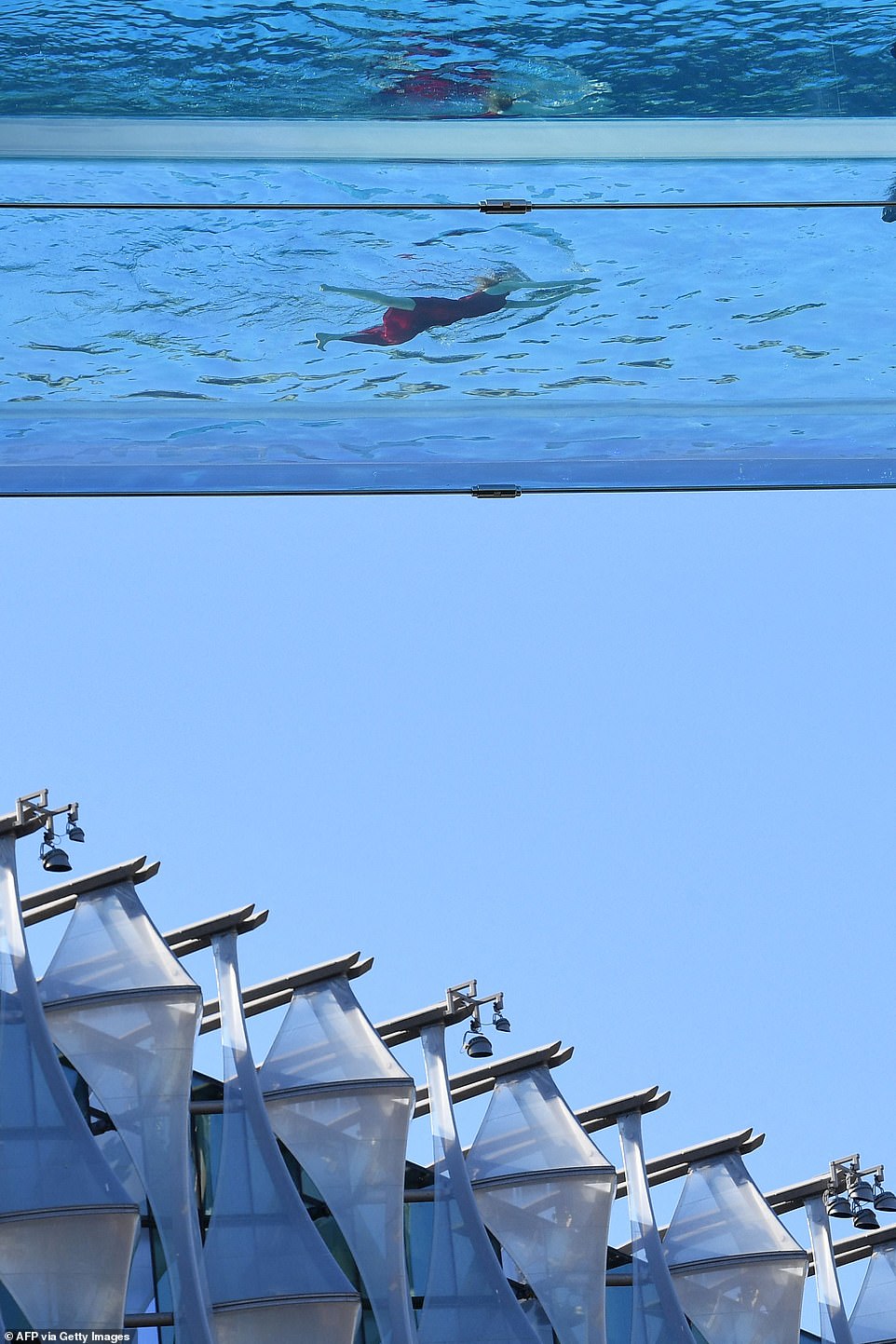 Models have been sampling the waters already. One is pictured here as she swims between the two blocks, with other buildings below her in the distance

The Capital FM DJ and former I’m a Celebrity contestant will be hosting a livestream of the event.

Top synchronised swimming team, Aquabatix will also be performing a stunning show – not surprisingly their first time in a see-through pool floating 115ft above London.

The opening, which has been delayed by Covid, will set the seal on an ambitious engineering project which involved transporting the acrylic aquarium-style pool nearly 5,000 miles from the factory in Colorado where it was made.

The pool, along with a rooftop spa, summer bar and orangery, is the centrepiece of the £1bn Embassy Gardens development near the Thames. 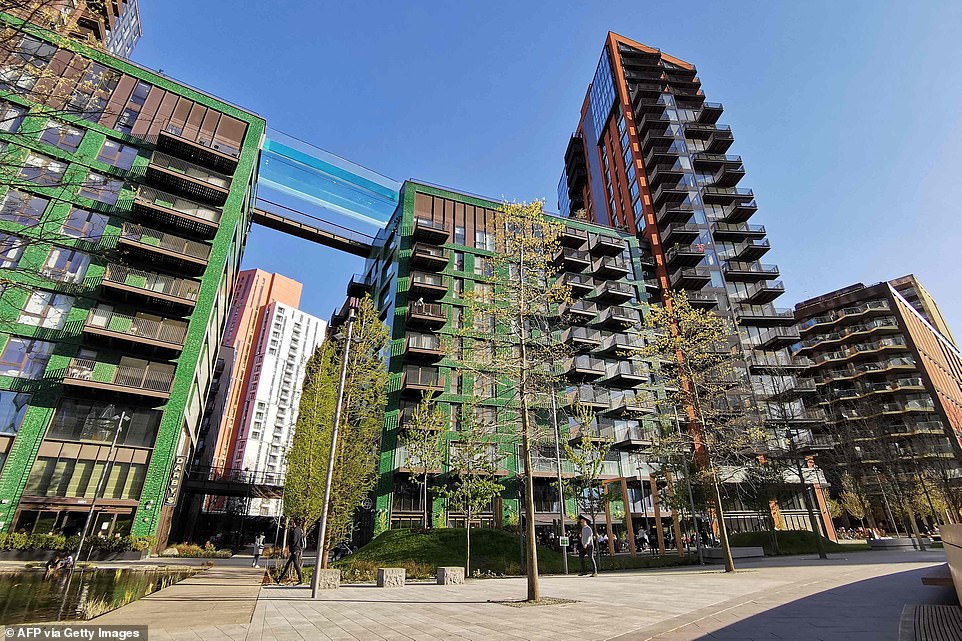 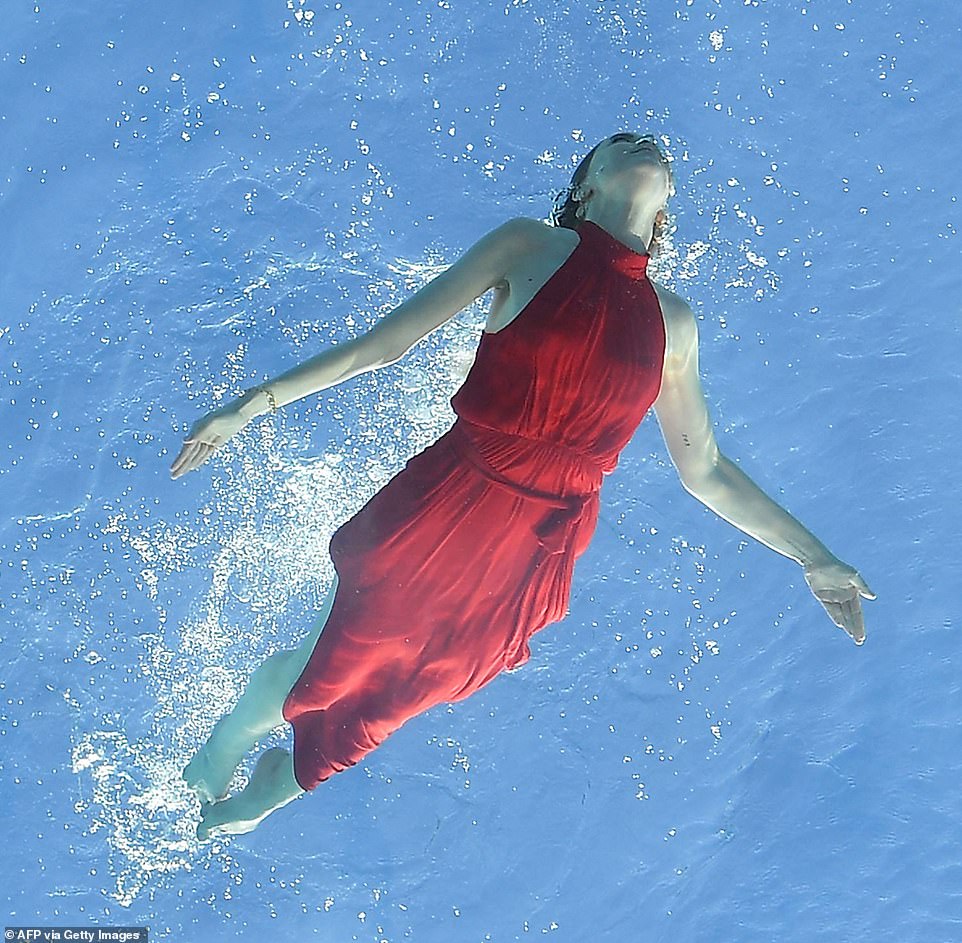 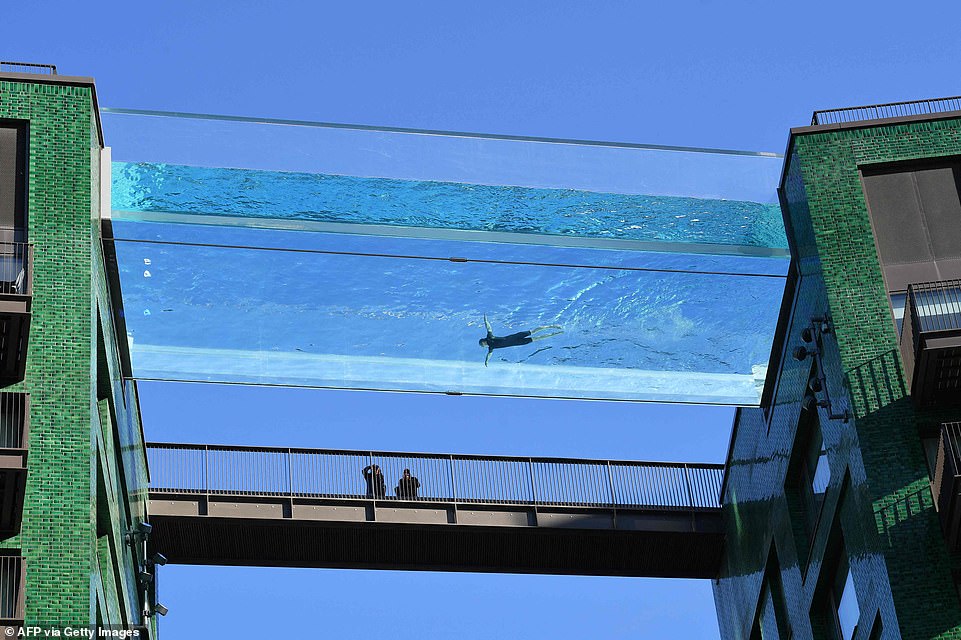 The Sky Pool has been hailed as: ‘a product of unique ambition, innovation, perseverance and imagination’. 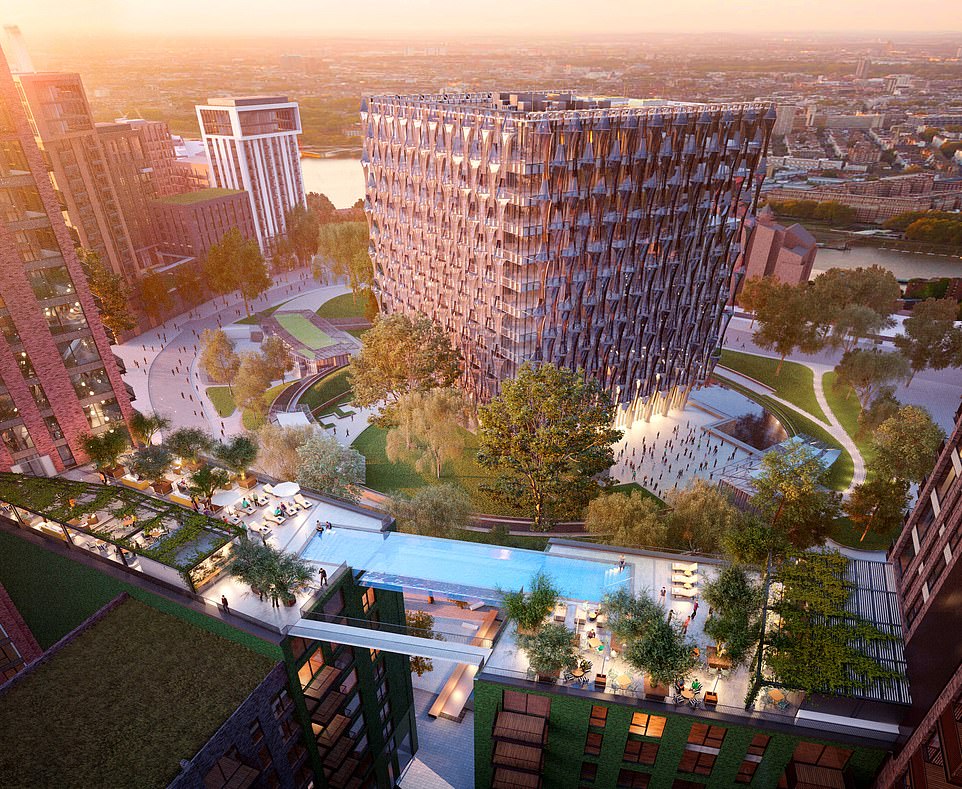 Swimmers will be able to enjoy views across central London while completing lengths between the buildings in the new residential neighbourhood in Nine Elms, Vauxhall.

Suspended 35 metres above the ground, the iconic structure will offer views of the House of Parliament, the London Eye and London’s city skyline.

The first of its kind and entirely transparent, the 25m-long, 5m-wide and 3m-deep infinity pool, is set to become the most exclusive venue to take a dip in Britain.

The water in it alone weighs around 375 tonnes.

Nestled between the sky and the water swimmers will feel as though they are in an aquarium rather than an outdoor pool, as they gaze 35m down below. Bathers will also be able to swim between the adjoining buildings.

The intricate work to transport and install the Sky Pool involved a team of expert architects, engineers and consultants who had only inches of tolerance when placing the structure across the two buildings.

The team, made up of architects Arup Associates, engineers Eckersley O’Callaghan and aquarium designers Reynolds, shipped the huge bath to London, then gingerly craned it into position, as this exclusive video shows.

The ‘Sky Pool’, which accompanies a roof-top spa, summer bar and Orangery, is the centre piece of the £1 billion development in Vauxhall, south London, next to the new US Embassy 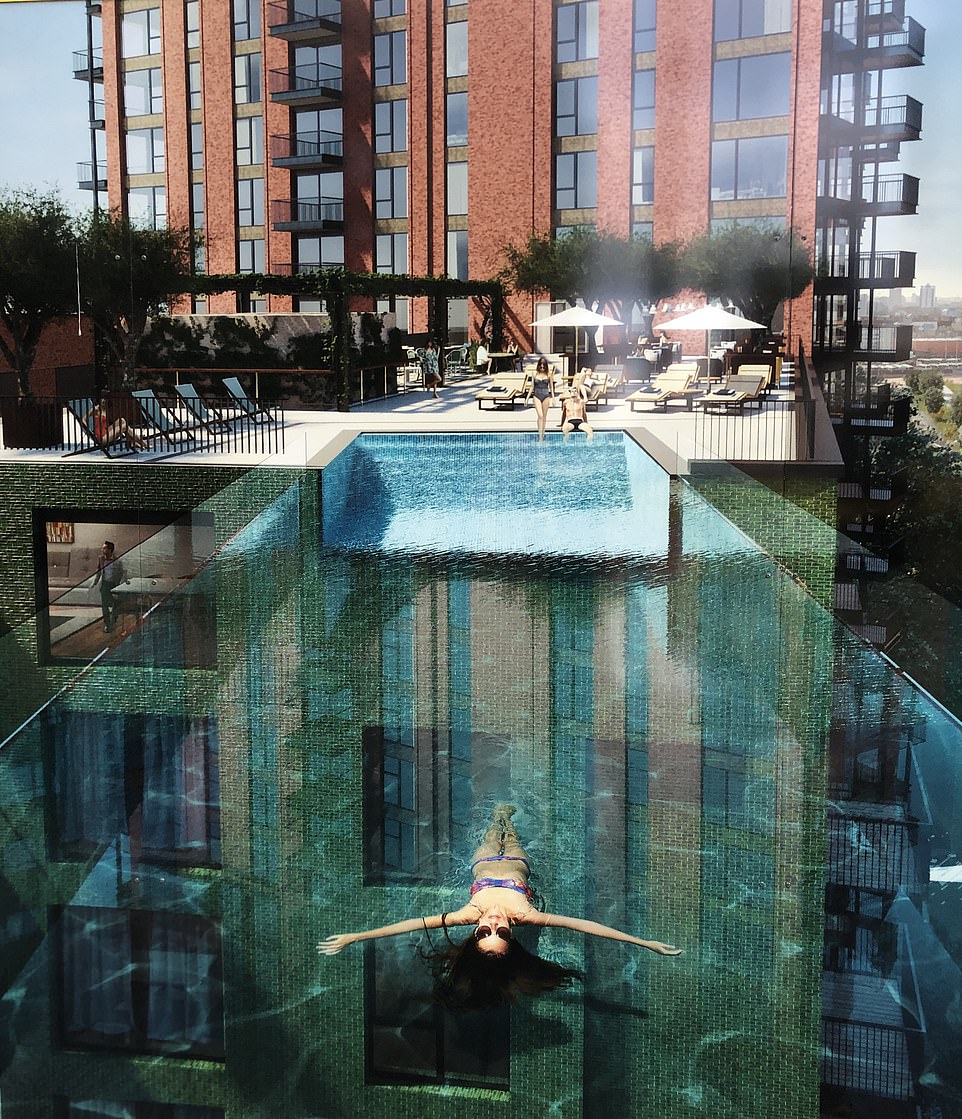 Nestled between the sky and the water swimmers are expected to feel like they are in an aquarium rather than an outdoor pool, as they look 35m down below. Bathers will also be able to swim between the adjoining buildings

The buildings connected by the Sky Pool will be subject to normal movements inherent to ten-storey buildings including wind sway and foundation settlement.

But the pool structure can deal with these movements by not being rigidly connected at both ends as it can slide while maintaining water-tight integrity.

The Sky Pool, which was originally set to open over the summer, is the show-stopping highlight of the Embassy Gardens development by EcoWorld Ballymore, which includes 2,000 homes and luxury apartments, a retail space, office space, as well as bars, restaurants and landscaped gardens, built around the new US Embassy.

Tan Sri Dato’ Sri Liew Kee Sin, Executive Vice Chairman, of EcoWorld International, previously said: ‘The construction of the Sky Pool has been a very exciting project, which EcoWorld Ballymore are delighted to be turning into a reality.

‘The opening…will be a huge milestone for the development, and for the Nine Elms area more generally, as the pool really will be a spectacle that locals and visitors to the area alike will want to see. It is a product of unique ambition, innovation, perseverance and imagination, we hope both residents and businesses in the area will be proud to have the Sky Pool on their doorsteps.’

Sean Mulryan, Ballymore Chairman, added: ‘The vision for the Sky Pool stemmed from a desire to push the boundaries in the capability of construction and engineering, Ecoworld Ballymore wanted to do something that had never been done before.

‘We like to push the boundaries on all aspects of design, the Sky Pool’s transparent structure is the result of significant advancements in technologies over the last decade. The experience of the pool will be truly unique, it will feel like floating through the air in central London,’ he added.