A pregnant policewoman has been shot dead by Taliban militants in front of her husband and children in a door-to-door execution, witnesses have said.

Banu Negar was killed at her home in Firozkoh, the capital of central Ghor province, amid increasing violence in Afghanistan under the new regime.

The mother, who worked in the local prison, was eight months pregnant at the time of the execution on Saturday. 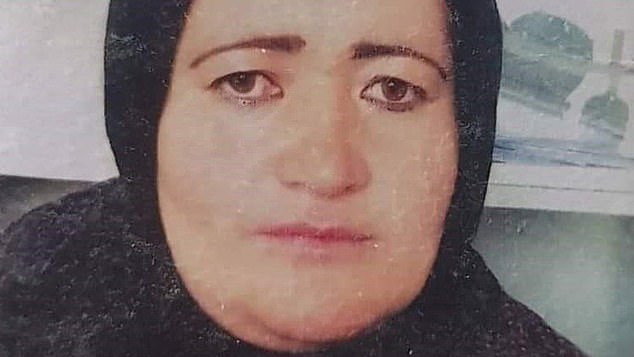 The terror group told the BBC they had no involvement in her death and are investigating it.

Spokesman Zabiullah Mujaheed said: ‘We are aware of the incident and I am confirming that the Taliban have not killed her, our investigation is ongoing.’

He added the Taliban has announced an amnesty for people who worked for the former administration.

Mujaheed said her death was caused by ‘personal enmity or something else’.

Three gunmen arrived at the house and searched it before tying members of the family up and carrying out the killing.

Pictures have circulated online showing blood spattered walls in the house and her disfigured corpse.

The Taliban have been trying to project a more tolerant and moderate image of themselves since seizing power. 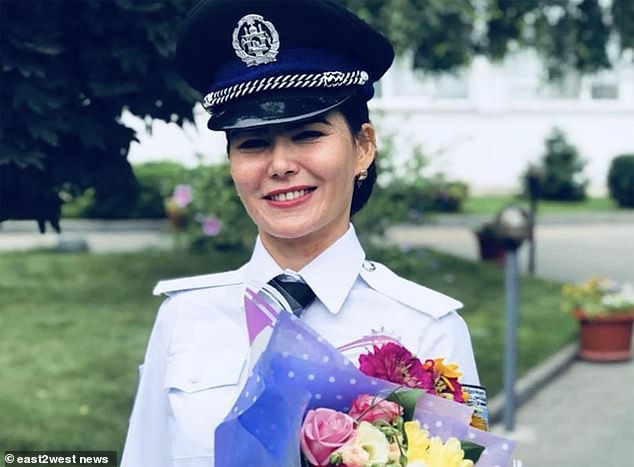 Earlier this week, top Afghan female cop Gulafroz Ebtekar (pictured) went on the run after suffering a ‘brutal beating’ from the Taliban

But a number of incidents of horrific violence have been reported in Afghanistan under the repressive regime.

Fighters have been seen going door to door hunting former members of the Afghan security forces and Western allies.

Earlier this week, a top Afghan female cop went on the run after suffering a ‘brutal beating’ from the Taliban.

Gulafroz Ebtekar, believed to be 34, was a deputy head of criminal investigations in Afghanistan’s Interior Ministry and is seen as a role model for Afghan women with a notable media presence.

She was singled out by the Taliban as a target at the gates outside Hamid Karzai international airport in Kabul, where she spent five nights attempting to secure a place on an evacuation flight.

She said:  I sent messages to the embassies of many countries to save myself and my family, but all to no avail.’

It comes after the Taliban attacked Afghan women protesters demanding equal rights as they fired shots into the air and ‘let off tear gas’ during a peaceful march yesterday. 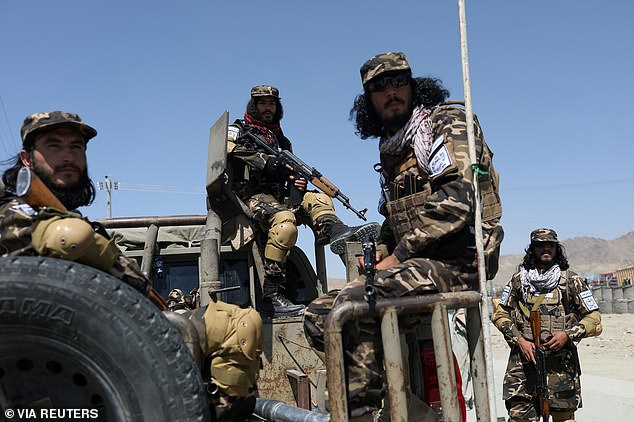 The women’s march – the second in as many days in the capital – began with demonstrators laying a wreath outside Afghanistan’s defence ministry to honour soldiers who have died fighting the extremist group, before moving on to the presidential palace.

But the peaceful protest descended into chaos and turned violent as Taliban special forces armed with assault rifles waded into the crowd, firing shots into the air and sending demonstrators fleeing.

One prominent protester, 20-year-old Maryam Naiby, said of the campaign in the wake of the Taliban seizing power: ‘We are here to gain human rights in Afghanistan. I love my country. I will always be here.’

When the Taliban first gained hold of the country some two decades ago, women and girls were mostly denied education and employment.

Burqas became mandatory in public, women could not leave home without a male companion, and street protests were unthinkable.

While the group has promised a more inclusive government, many women in the country remain skeptical. 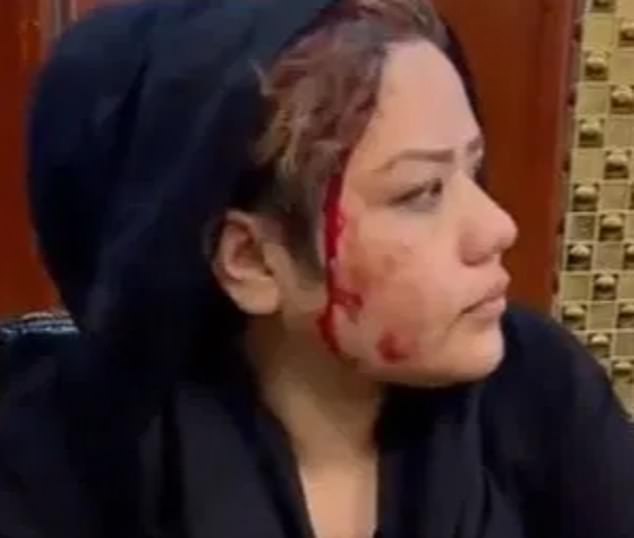 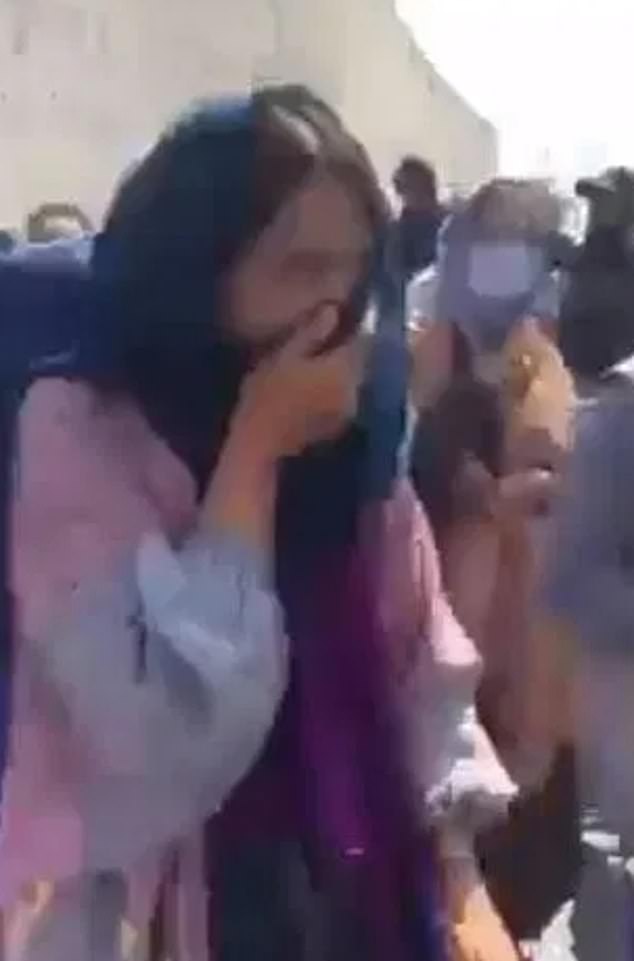 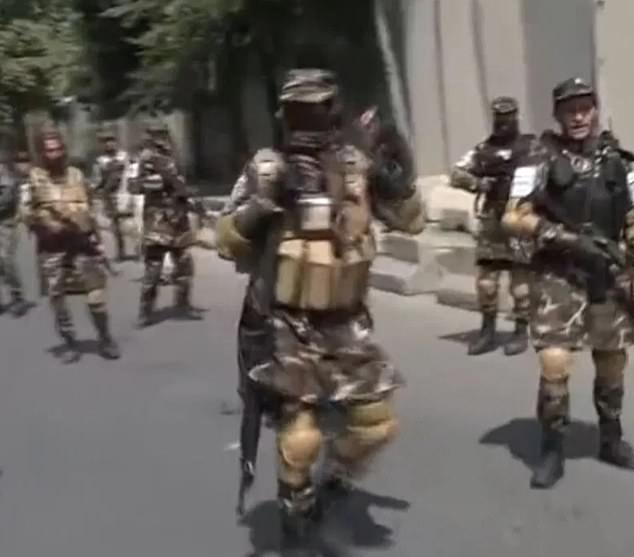 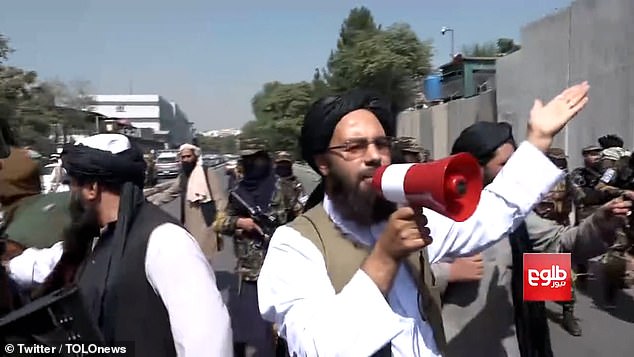 The peaceful march descended into chaos as Taliban special forces waded into the crowd, firing shots into the air and sending demonstrators fleeing

Video: A number of women rights activists and reporters protested for a second day in Kabul on Saturday, and said the protest turned violent as Taliban forces did not allow the protesters to march toward the Presidential Palace. #TOLOnews pic.twitter.com/X2HJpeALvA 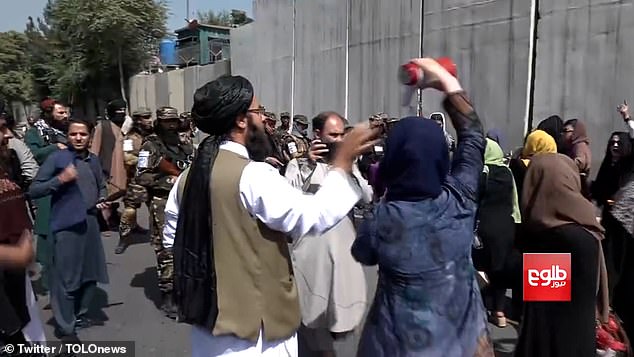 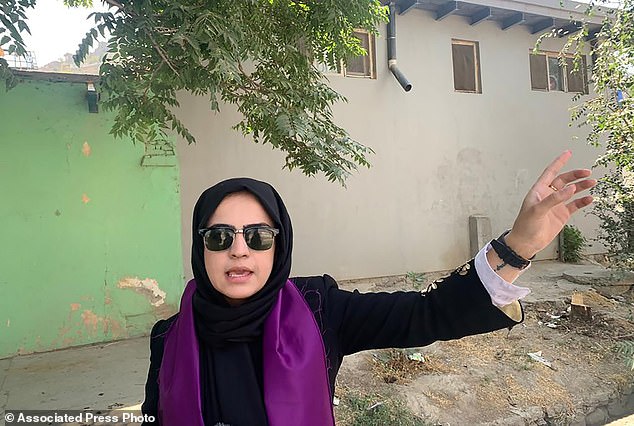 Taliban and opposition forces were fighting on Saturday for control of the Panjshir valley north of Kabul, the last province in Afghanistan holding out against the Islamist militia, according to reports.

Taliban sources had said on Friday the group had seized control of the valley, although the resistance denied it had fallen.

The Taliban have so far issued no public declaration that they had taken the valley, which resisted their rule when they were last in power in Kabul in 1996-2001.

A spokesman for the National Resistance Front of Afghanistan, which groups opposition forces loyal to local leader Ahmad Massoud, said Taliban forces reached the Darband heights on the border between Kapisa province and Panjshir but were pushed back.

As the protesters’ shouts grew louder, several Taliban officials waded into the crowd to ask what they wanted to say.

The Taliban official promised women would be given their rights, but the women, all in their early 20s, were skeptical.

Taliban fighters quickly captured most of Afghanistan last month and celebrated the departure of the last US forces after 20 years of war.

The insurgent group must now govern a war-ravaged country that is heavily reliant on international aid.

The Taliban have promised an inclusive government and a more moderate form of Islamic rule than when they last ruled the country from 1996 to 2001.

But many Afghans, especially women, are deeply skeptical and fear a rollback of rights gained over the last two decades.

For much of the past two weeks, Taliban officials have been holding meetings among themselves, amid reports of differences between them.

It was not immediately clear what he had to say to the Taliban leadership, but the Pakistani intelligence service has a strong influence on the Taliban.

The Taliban leadership had its headquarters in Pakistan and were often said to be in direct contact with the powerful Inter-Services Intelligence agency. Although Pakistan routinely denies providing the Taliban with military aid, the accusation was often made by the Afghan government and Washington. 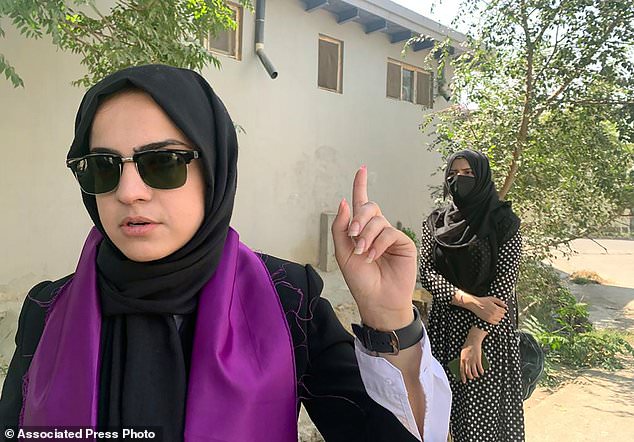 Many Afghans, especially women, are deeply skeptical and fear a rollback of rights gained over the last two decades

The United Nations chief will convene a ministerial meeting in Geneva on September 13 to seek a swift scale-up in funding to address the growing humanitarian crisis in Afghanistan, where nearly half the country’s 38 million people need assistance.

UN spokesman Stephane Dujarric made the announcement Friday and said Secretary-General Antonio Guterres will also appeal ‘for full and unimpeded humanitarian access to make sure Afghans continue to get the essential services they need.’

Dujarric said the UN appeal for $1.3billion for 2021 to help more than 18 million people is just 40 per cent funded, leaving a $766million deficit.

‘Afghanistan faces a looming humanitarian catastrophe,’ the UN spokesman said. ‘One in three Afghans do not know where their next meal will come from. Nearly half of all children under the age of 5 are predicted to be acutely malnourished in the next 12 months.’

Earlier Friday, Dujarric said the secretary-general is ‘very grateful for the generosity’ of Denmark, Kazakhstan, North Macedonia, Pakistan, Poland, Qatar, the United Arab Emirates and the United States for making available facilities and transport for the temporary relocation of UN staff in Afghanistan.

Dujarric announced August 18 that about 100 of the UN’s 300 international staff were being moved to Kazakhstan to work remotely because of security concerns.

Gen Faiez’s visit comes as the world waits to see what kind of government the Taliban will eventually announce, seeking one that is inclusive and ensures protection of women’s rights and the country’s minorities.

The Taliban have promised a broad-based government and have held talks with former president Hamid Karzai and the former government’s negotiation chief Abdullah Abdullah.

But the makeup of the new government is uncertain and it is unclear whether hard-line ideologues among the Taliban will win the day – and whether the rollbacks feared by the demonstrating women will occur.

Taliban members whitewashed murals on Saturday, some of which promoted health care, warned of the dangers of HIV and even paid homage to foreign contributors, like anthropologist Nancy Dupree, who singlehandedly chronicled Afghanistan’s rich cultural legacy.

It is a worrying sign of attempts to erase reminders of the past 20 years.

The murals were replaced with slogans congratulating Afghans on their victory.

A Taliban cultural commission spokesman, Ahmadullah Muttaqi, tweeted that the murals were painted over ‘because they are against our values. They were spoiling the minds of the mujahedeen, and instead we wrote slogans that will be useful to everyone’.

The young women demonstrators said they have had to defy their worried families to press ahead with protests, even sneaking out of their homes to take their demands for equal rights.

Farhat Popalzai, another 24-year-old university student, said she wanted to represent women too afraid to come out on the street.

‘I am the voice of the women who are unable to speak,’ she said. ‘They think this is a man’s country but it is not – it is a woman’s country, too.’

Ms Popalzai and her fellow demonstrators are too young to remember the Taliban rule that ended in 2001 with the US-led invasion. The say their fear is based on the stories they have heard of women not being allowed to go to school or to work.

Ms Naiby has already operated a women’s organisation and is a spokesperson for Afghanistan’s Paralympics.

US dollar index forecast ahead of BOC and ECB rate decisions

Elegant looks of the stars of the Venice Film Festival in the first days of the events.. Photos