Tao Geoghegan Hart has become the fifth Briton to win a Grand Tour with victory in the Giro d’Italia.

The 25-year-old Londoner pulled on the pink jersey for the first time on the final podium in Milan after a dramatic closing weekend of the race, which saw two riders not considered contenders at the outset starting the last stage level on time – unprecedented in a Grand Tour.

Team Sunweb’s Jai Hindley had taken pink as Geoghegan Hart won stage 20 on Saturday, but got to wear it for only 18 minutes in the race as Geoghegan Hart beat the Australian by 39 seconds over the closing 15.7 kilometre time trial. 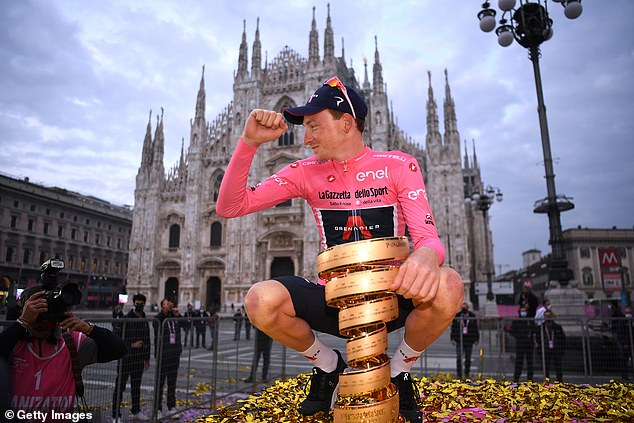 That secured the Italian’s fourth stage win of the race and a seventh for the team – making this the most successful Grand Tour in the history of what was Team Sky and then Team Ineos.

Geoghegan Hart follows Sir Bradley Wiggins, Chris Froome, Geraint Thomas and Simon Yates in winning one of the big three stage races on the calendar, delivering Britain’s 11th Grand Tour victory since Wiggins won the Tour de France in 2012, and second in the Giro after Froome won in 2018. 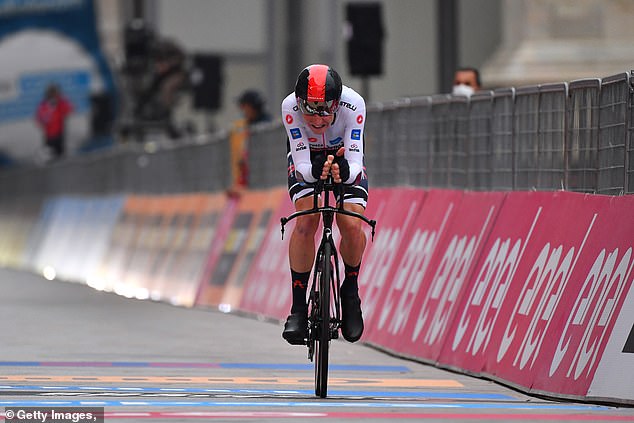 But this was by far the most unexpected entry on the list, with Geoghegan Hart having started the Giro planning to support Thomas before the Welshman’s race-ending crash on stage three.

The race also lost fellow contenders Simon Yates and Steven Kruijswijk following positive tests for coronavirus, while more established names like Vincenzo Nibali and Jakob Fuglsang came up short at the end of this stangest of seasons.

An outstanding final week in the mountains propelled Geoghegan Hart up the standings, with his victory on Saturday’s stage 20 setting up the unprecedented scenario of the top two in a Grand Tour being level on time at the start of the final day.

‘It’s bizarre, to be honest,’ Geoghegan Hart said. ‘Not in my wildest dreams did I imagine that this would be possible when we started nearly a month ago in Sicily. 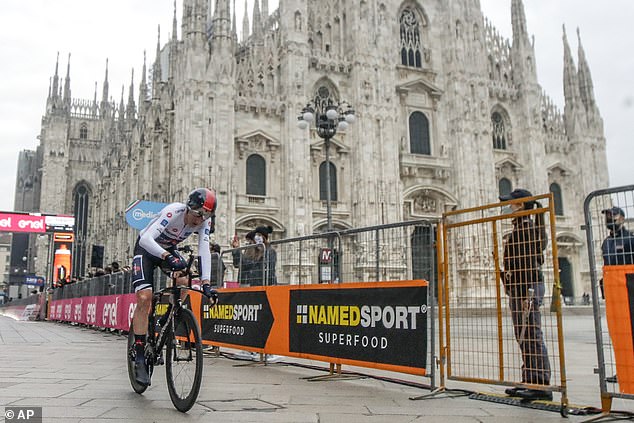 ‘All of my career I’ve dreamt of trying to be in the top five, top 10 maybe in a race of this stature so this is something completely and utterly different. I think this is going to take a long time to sink in.’

Geoghegan Hart was up on every time check during the time trial, which fittingly resembled an old-fashioned British 10-miler in distance.

His advantage was such that the team car were telling him to ease off towards the end.

‘You know you’re in a pretty good situation when they’re screaming at you not to take any risks in the last kilometre,’ he said. ‘It’s not often your directeur sportif tells you to slow down in a 15km time trial but I knew the work had been done up to that point.’ 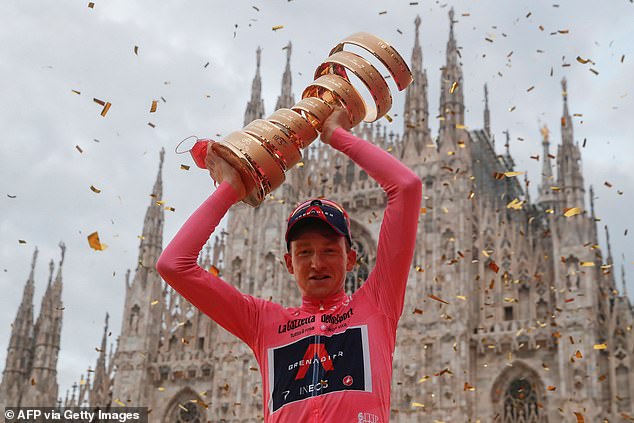 Hindley’s team-mate Wilco Kelderman, who lost pink to his team-mate Hindley on stage 19 over the Stelvio on Friday, took third place overall, 89 seconds down overall.

Nibali took seventh place, leaving Italy without a rider in the top five for the first time in Giro history.