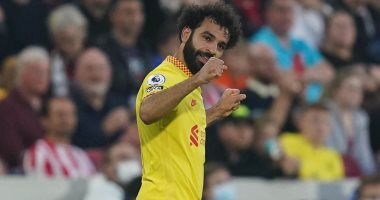 The Egyptian star, Mohamed Salah, the English player of Liverpool, set wholesale records after scoring a goal in the Reds’ 3-3 draw with its host Brentford, in the exciting confrontation that brought them together this evening, Saturday, at the “Griffin Park” stadium, as part of the sixth round competitions. From the age of the English Premier League competition “Premier League” for the current season 2021-2022.

And the “Opta” network, which specializes in statistics and records, stated that Mohamed Salah became the fastest to reach 100 goals in the English Premier League with Liverpool in history, during 151 matches, breaking Roger Hunt’s record (152 matches).

Mohamed Salah also became the fourth fastest player in the history of the Premier League to score 100 goals with one team behind the trio: Alan Shearer (124) matches, Harry Kane (138) and Sergio Aguero (147), and the Egyptian star surpassed Terry Henry, who reached the centenary in the league. England in 160 matches.

Mohamed Salah raised his score to 131 goals with Liverpool in various tournaments, to be unique in the tenth place in the list of the best scorers of the Reds throughout the ages.

Your luck today, Sunday 9/26/2021 Pisces at the professional, health and emotional levels.. Cooperate with your partner