The late, great Diego Maradona made his name on these shores for his infamous Hand of God goal, swiftly followed by one of the greatest ever scored, in a World Cup quarter-final in 1986.

While the Argentine icon became synonymous in this country for an action-packed match against England in Mexico, he rarely made it onto these shores.

But when he did – it was often as colourful and eventful as the man himself. And, on at least three occasions, he nearly moved here permanently.

From his first goal for Argentina at Hampden Park in 1979, to numerous charity and testimonial appearances, Sportsmail take a look back at when Maradona the footballer came to the UK… 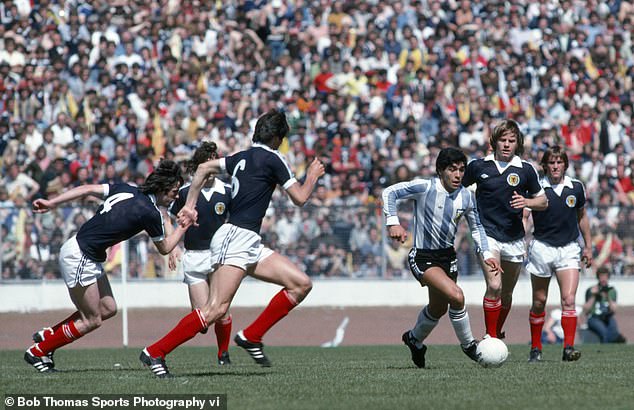 Two years after his debut at the age of 16, and 12 months on from being left out of Argentina’s World Cup victory on home soil because he was deemed too young, Maradona arrived on British soil.

At a packed Hampden Park and against a Scottish side featuring Kenny Dalglish and Alan Hansen, and managed by Jock Stein, Maradona scored the first of 34 goals for his country with 20 minutes remaining.

The 18-year-old Maradona was still just a precocious young talent making his way at Argentinos Juniors, but the 61,918 who saw him in Glasgow that day were seeing the beginning of one of the finest careers in football. 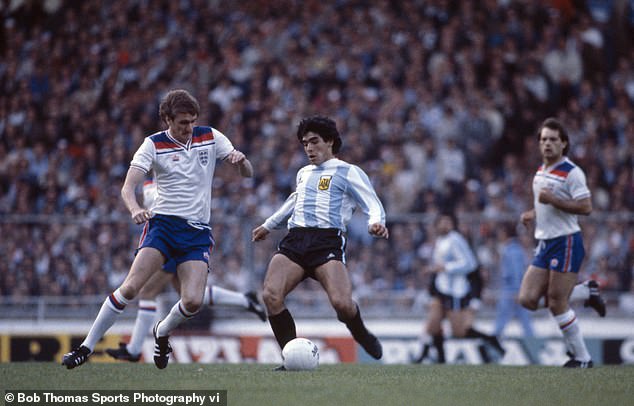 After the game, a young Maradona swapped shirts with England’s Kevin Keegan

Just under 12 months later, Maradona was back and played against England for the first of only two times in his career.

The great rivalry between the two nations was in its infancy here, two years before the Falklands War and with that World Cup meeting still six years away. This was just the third time the two had met since the controversial World Cup quarter-final clash in 1966, where captain Antonio Rattin saw red and Geoff Hurst settled the tie 12 minutes from time.

David Johnson scored twice as England ran out 3-1 victors at Wembley, and Maradona, still just a teenager at this stage, swapped shirts with Kevin Keegan at the end. 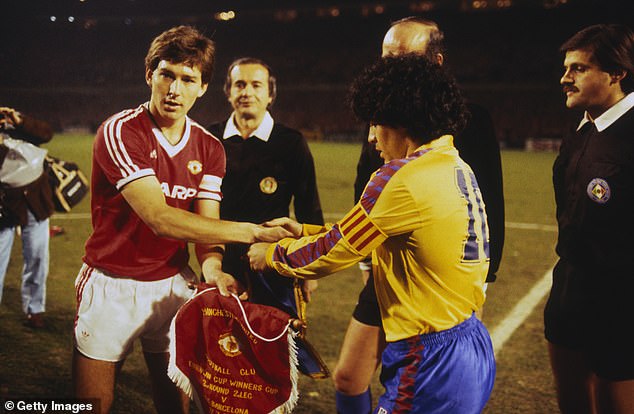 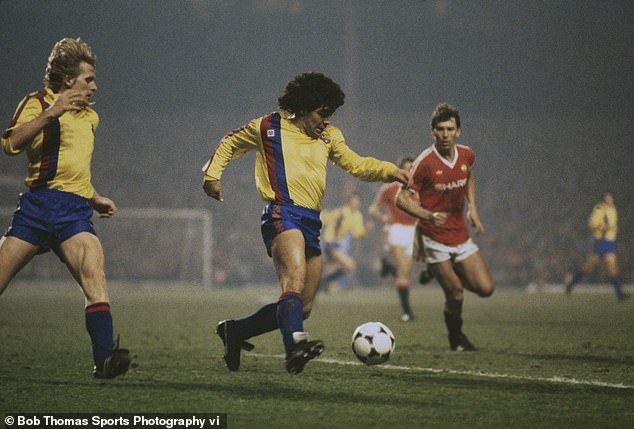 Four years on from his last appearance in England, Maradona was back. Now 23, he was becoming a household name and had earned his big move to Europe after swapping Boca Juniors for Barcelona in 1982.

But it’s one he won’t have looked back on with fondness.

Barca were two-goals up from the first leg at the Nou Camp, but succumbed to a furious onslaught from Ron Atkinson’s side.

Robson scored twice and Frank Stapleton the other as United launched an improbable comeback to secure a place in the semi-finals, where they were beaten by Juventus. 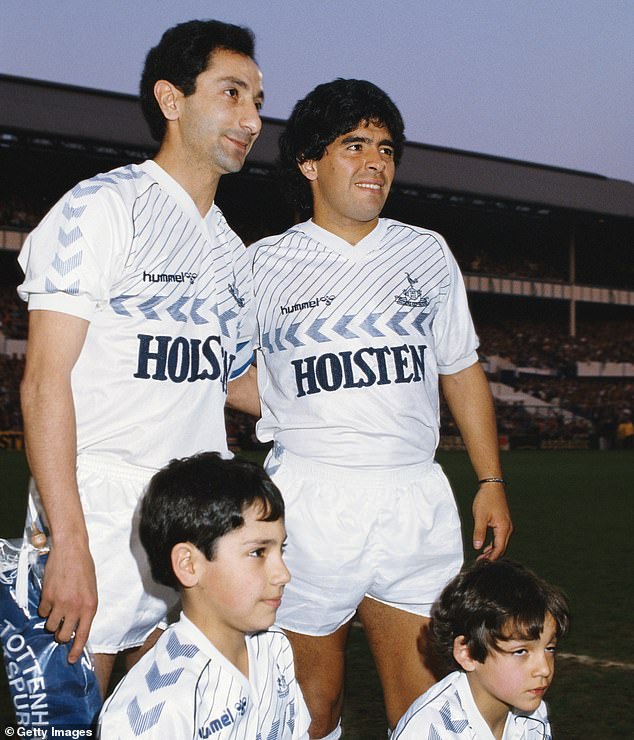 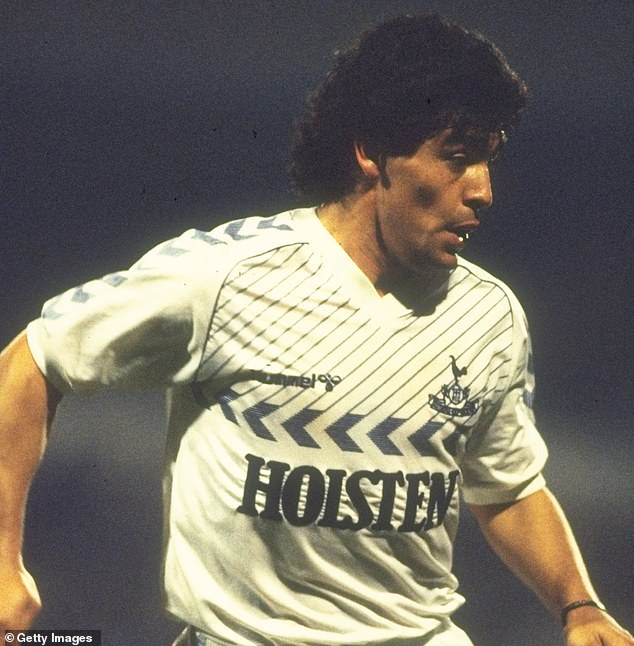 In the summer where he went from a global superstar to a footballing legend, Maradona took time out of his preparations for Mexico ’86 to take part in Ossie Ardiles’ testimonial at White Hart Lane.

It led to the surreal image of the great Maradona pulling on a Spurs shirt as he fulfilled his friend’s wishes.

For one night only, Tottenham’s midfield lined up as: Glenn Hoddle, Chris Waddle, Ardiles and Maradona. The Napoli icon even turned up without boots, and was forced to borrow Clive Allen’s.

‘Ossie says: “Who takes [size] six and a half?” Allen recalled to talkSPORT.

‘I tell him I do and that I had two pairs of boots; one old pair I’d worn all season and a new pair I was breaking in, so I said: “Diego, be my guest and take whatever pair you want!”

Allen scored the winner in a 2-1 win against Inter Milan, with Mark Falco scoring the other.

‘I’ve never played in a game where I felt like a spectator because, on the night, Diego and Glenn were just on another planet,’ he added.

‘They were telepathic, and you just wanted them to have the ball. Some of the flicks and skills were incredible.’

Football League 3-0 Rest of the World

To mark the start of the Football League’s centenary season, an XI faced the Rest of the World in a celebration match at Wembley.

It saw England boss Bobby Robson pit his wits against future Three Lions coach Terry Venables. The great Pele was a guest of honour at the home of football.

The Football League side lined up largely as a glorified England XI, with Scotland’s Richard Gough’s and the Republic of Ireland’s Paul McGrath the notable exceptions.

Gary Lineker, by now at Barcelona, was the sole English representative for the Rest of the World, while Maradona and Michel Platini were the big draws.

Fourteeen months after the hand of god incident at the World Cup, Maradona was booed throughout as the crowd’s pantomime villain for the day.

The game did not live long in the memory. Maradona was reportedly paid £100,000 to turn up, Wembley was only two-thirds full with the game live on ITV and a never-ending series of substitutions rendering the game little more than a kickabout. 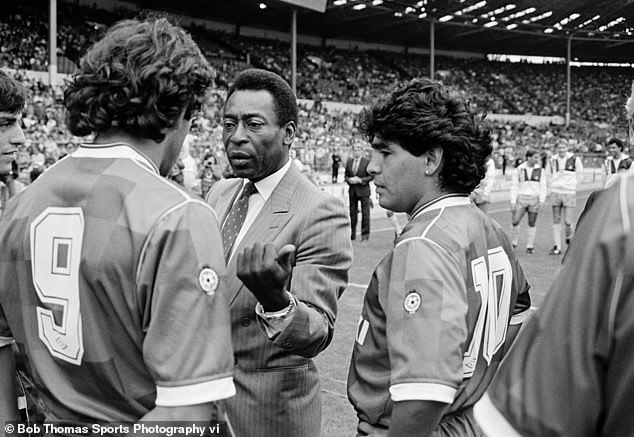 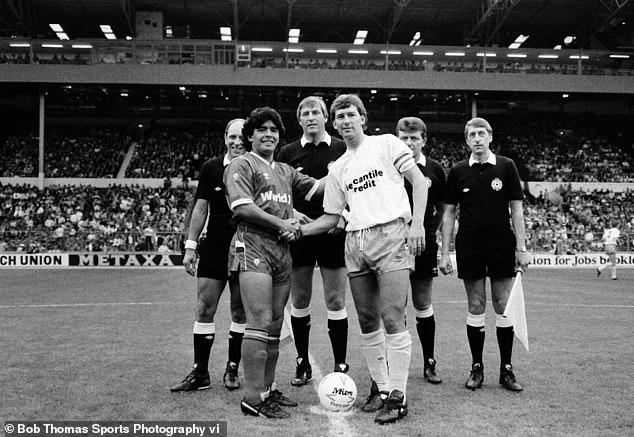 Nearly 10 years on from his retirement, Maradona agreed to take part in ITV’s inaugural Soccer Aid – a program to raise money for UNICEF.

Maradona was one of nine Rest of the World legends in the game against England alongside the likes of Gianfranco Zola, Ruud Gullit and David Ginola, in a side which also featured Gordon Ramsay, Alastair Campbell and Patrick Kielty.

Ben Shepherd played in the game, and recounted Maradona’s aura on Good Morning Britain on Thursday: ‘There was this extraordinary charisma that he had around the game.

‘He was just amazing, because the expectation was he would only play 10-15 minutes at the start of the game, but he wouldn’t come off.

‘He was having so much fun, he absolutely loved every single minute of it. Being the centre of attention on a football pitch.’

The 45-year-old Maradona played the full 90 minutes and showed he still had it as he lit up Old Trafford.

With 15 minutes to go his moment arrived as singer-songwriter David Gray handballed inside the area. Maradona, facing up to TV presenter Jamie Theakston, left his opposite number stood on the spot as he nonchalantly rolled the ball into the bottom corner. 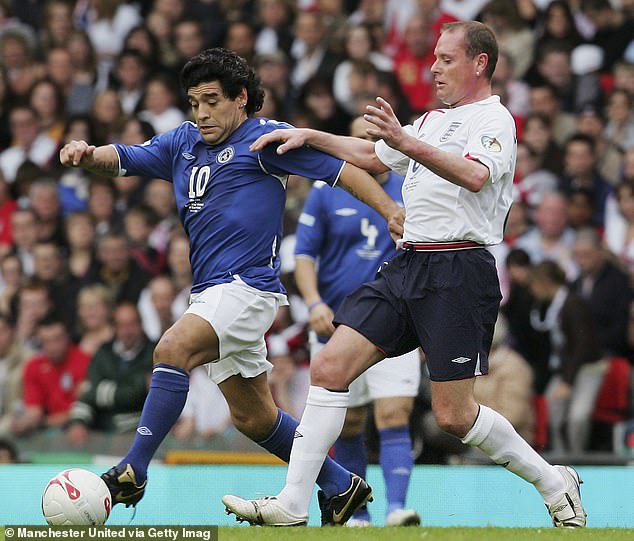 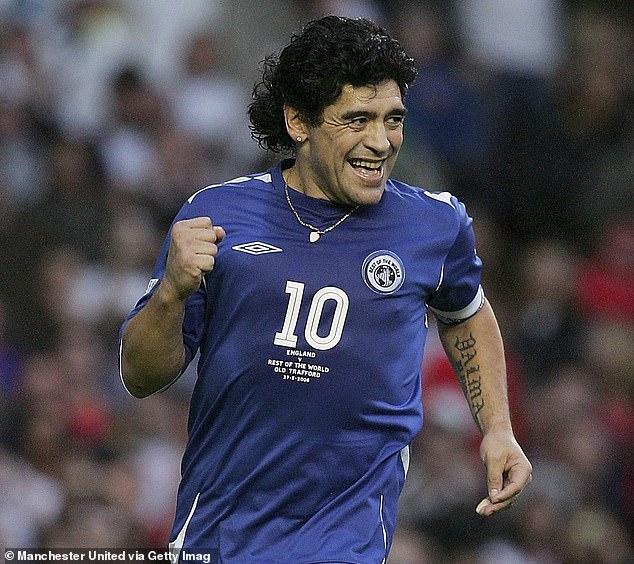 Maradona got on the scoresheet, slotting a penalty past TV presenter Jamie Theakston

PS – What about the time he managed in the UK?

Maradona’s first job in management was a big one. The national side. It ended in tears at the 2010 World Cup as Argentina were demolished by Germany, but in 2008 he replaced Alfio Basile in charge.

Future Liverpool winger Maxi Rodriguez scored the only goal of the game in the eighth minute to give Maradona a winning start. 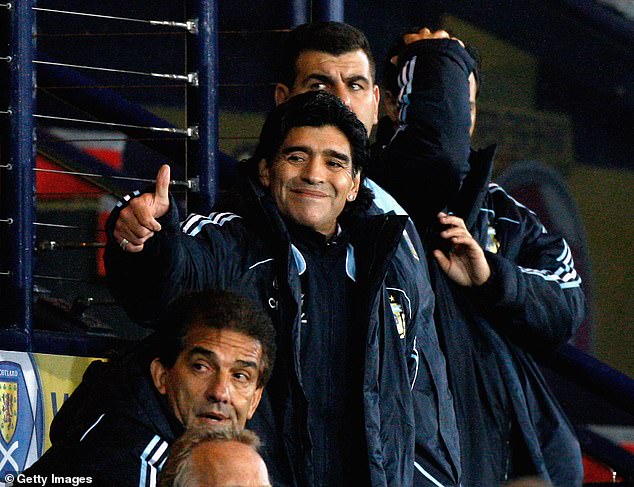 PS – And he could have moved here permanently!

England wasn’t far from being Maradona’s permanent home on at least three occasions. His career in Europe took him to Spain, to Italy and back to Spain again. But England could have joined that list.

Incredibly, he could have joined Sheffield United in 1978 when the 17-year-old Maradona was spotted by Blades boss Harry Haslam on a scouting mission to Argentina.

Haslam was so impressed that he immediately offered £200,000 to bring Maradona to South Yorkshire – but, with the side in the second division at the time, the board decided not to back the deal.

United went ahead and paid £160,000 for his compatriot, Alex Sabella instead – just £40,000 less than the fee Haslam agreed to pay Argentinos Juniors for Maradona.

John Ludden, author of books such as ‘Maradona’s Adventure in Europe’, told The Sportsman: ‘Maradona was determined to sign for Sheffield United, a club that at the time was playing in the English second division and had reached an agreement for his signing.

‘Diego was ready to go. It was a real offer to take Maradona and another player named Carlos Fren. Airplane tickets were even booked. The greed of their agents made them ask for more money and the transfer stopped.

‘He was 17 years old and was already a genius, you could say it was a lost opportunity,’ Ludden recalled.

It was the closest Maradona came to England. In 1987, Leeds set their sights on the World Cup winner.

Leeds were rumoured to be in for Maradona, and then-chairman Bill Fotherby recounted his side of the story to Sportsmail three years ago.

‘Jon said, “Bill, you couldn’t afford Maradona. No chance. Do you realise that you’re talking £8million?”.

‘Everyone thought we were crazy. But I got Smith up to Leeds and we had lunch in the box, looking onto the pitch. “Look Bill,” he said. “We’re bringing him over for a match between England and the World XI. Now, the possibilities of him having a game at Leeds… what could you do?”

‘I said we could fix it up with the city council, make it a big do. “But it mustn’t leak out.”

‘We go have dinner after dropping him off. There are two people I know there, big Leeds fans. “We saw you at the airport. Who are you going to sign?” So I said, “All I’m going to say is, think of Evita”. Soon we were getting phone calls from Buenos Aires about Maradona. Directors of Arsenal and Tottenham are asking: “Are you going for b****y Maradona? Where have you got the money from?” 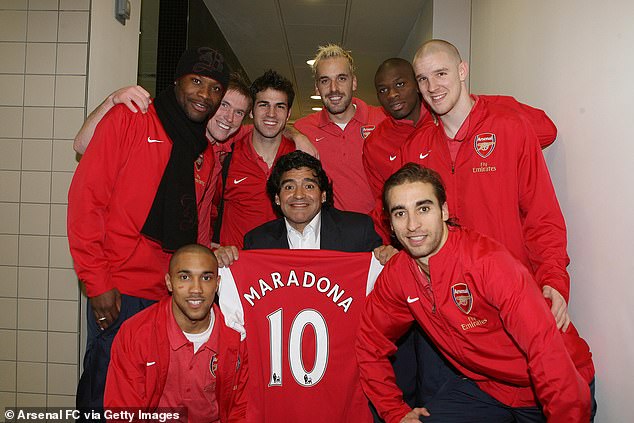 Maradona, pictured with players of the Arsenal squad in 2008, nearly joined the Gunners

And, of course, Arsenal also came close to signing Maradona – though it doesn’t appear that Arsene Wenger was involved in this one.

According to football.london, Arsenal were denied a move for 19-year-old Maradona because FA secretary Graham Kelly ‘didn’t want foreign players from outside Europe being granted a work permit’ for two years.

Maradona admitted back in 2008: ‘When I was 19 they tried to buy me and another player from Argentinos Juniors – around the time Ricky Villa and Ossie Ardiles signed for Tottenham.

‘But it didn’t happen. I sometimes wonder what might have happened.’

Cyber Monday 2020: You can still save on Sony's epic OLED TV today