A six year old girl who was selling eggs from her family’s birds to earn pocket money had been left shocked and upset after a heartless thief stole her honesty box.

Lowri Gilraine sold the eggs from her driveway and left them on a stool next to a sign she handmade, with an honesty collection box for people to leave their money.

But, the little girl was upset to discover that her box – which had less than £10 in it – had been stolen.

Lowri, who started selling the eggs during lockdown, said: ‘They are supposed to put money in the box – not take it away.

‘If I met the person who stole the money, I would say to them – ‘can you give it back?’ 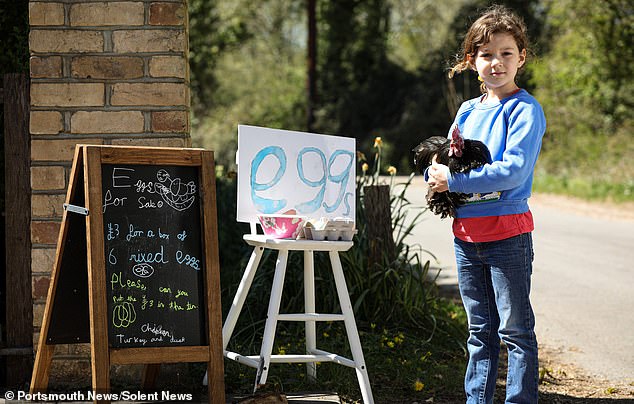 Pictured: Lowri Gilraine, at the gate where her honesty box was stolen, in Emsworth with one of her chickens. Lowri was selling a mix of eggs to earn some pocket money during lockdown

Lowri, from Emsworth, Hants, charged £3 for a box of six mixed eggs and collected them from her family’s three ducks, four turkeys, and 20 chickens.

Lowri’s mother Nerys Gilraine said that her daughter has been collecting and selling the eggs for months and that Lowri was shocked after the callous thief swiped the box.

Mrs Gilraine, a mother of three, said: ‘It’s just really sad that at the moment there is a part of society that is so disengaged that they would think it’s okay to do this.’

But the setback hasn’t caused Lowri to abandon her pocket-money boosting business, as her family has sourced a new money box.

Lowri’s family posted about the incident on social media and have been overwhelmed by the community’s response. 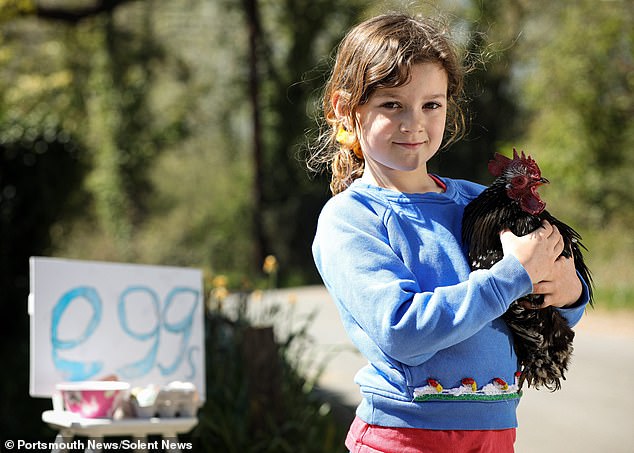 Hundreds of people have reacted to the post, with almost a dozen offers to replace the stolen money box or support her driveway enterprise – and even one offer to build a bespoke stall for Lowri, according to Mrs Gilraine.

Mrs Gilraine said: ‘I let her read some of the posts. Her face was lovely – she thought it was wonderful how considerate everyone has been.

Mrs Gilraine said the family has been overwhelmed by the community kindness, and has asked that any further offers of help be directed at ‘those more in need’ through the Beacon Food Bank in Havant, Hants, and the Southern Domestic Abuse Service.