Thousands of children are stuck in care home hell

Above all because it’s normally one of the few occasions he gets an entire week at home with his family.

Josh, from Warrington, suffers from a genetic illness and is severely disabled, requiring round-the-clock care which is provided by medical staff at the residential school where he stays five nights a week.

‘Every Christmas morning, Josh’s dad scoops him up out of bed and plonks him on his knee in front of the tree, where he’ll wriggle about in excitement,’ says his mother, Kate, a 42-year-old learning co-ordinator.

‘And he’s always trying to snuggle up to his six-year-old brother Seb.’ But not this year.

Josh is one of thousands of disabled youngsters stuck inside a care home for the festive season – hundreds of miles from home. 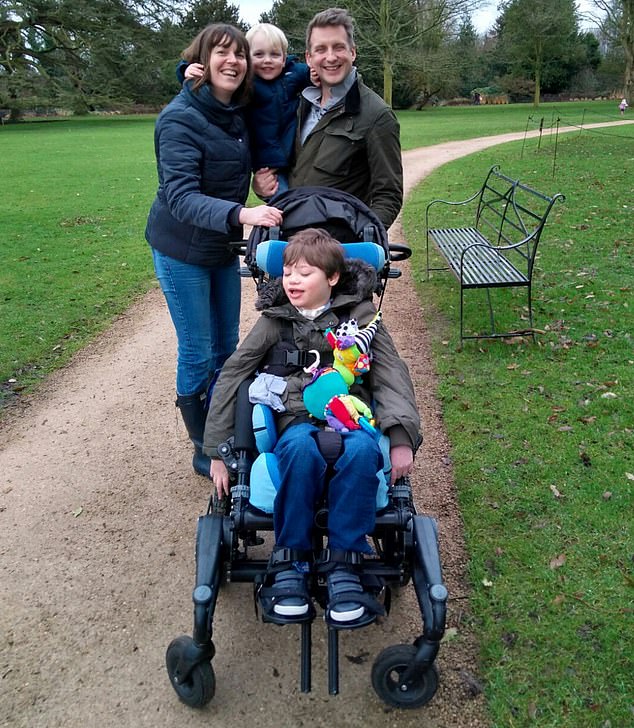 Josh Jones, from Warrington, suffers from a genetic illness and is severely disabled, requiring round-the-clock care which is provided by medical staff at the residential school where he stays five nights a week. Pictured: Josh with his parents Kate and Clive and brother Seb 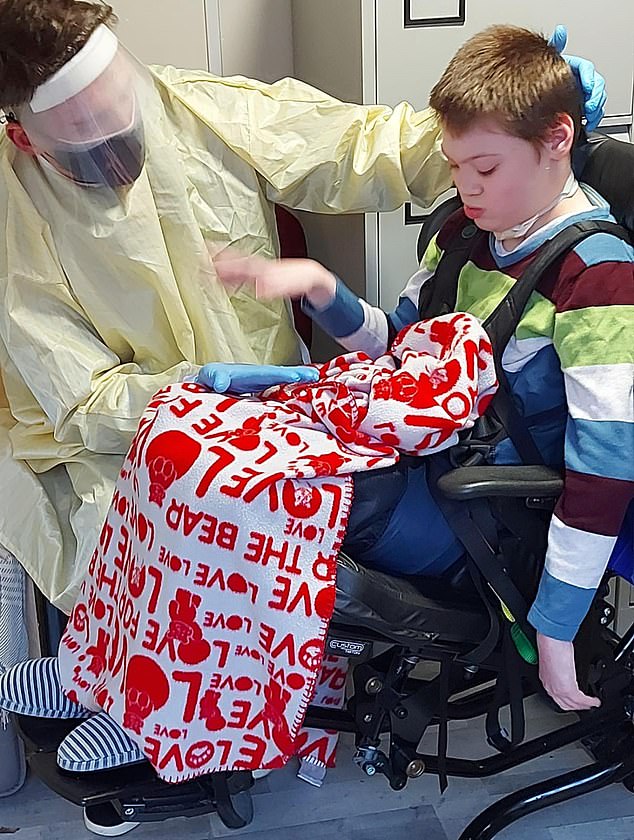 Since March, Kate and her husband Clive, 45, have spent just a few hours with their son. Despite indoor visits being permitted in tier 3 areas, Josh’s care providers have forbidden hugs and squeezes.

On Christmas Day, the family made the 90-minute trip to Josh’s care home for an outdoor visit, lasting just an hour – in full PPE.

‘He’s usually so excited to see us, all giddy but his eyes were blank and he clearly didn’t have a clue what was going on,’ says Kate.

‘What’s the point if we can’t hug or kiss our son at Christmas?’

Many have been ripped apart from their families this year, with tier 4 restrictions forbidding visits home for those in residential care.

Covid Q&A: Where did the new strain originate and is the rise in cases due to more tests?

Where did the new strain come from?

The new variant was first detected in mid-October by the Government’s taskforce that tracks mutations in Covid-19.

Samples that showed significant alterations were from London and Kent and had been collected in late September.

The most likely explanation for the variant is that a Covid-19 patient was infected with the virus for an unusually long period, during which time the virus could have adapted to the body, and mutated.

But Sharon Peacock, of the Covid-19 Genomics UK Consortium, said there is no evidence this mutation occurred in the UK.

Have positive cases increased because there have been more tests?

Last week, the UK achieved record levels of testing – more than 450,000 were completed on Tuesday alone. More tests will mean more positive cases but this doesn’t mean the numbers are skewed.

Scientists account for the increased number of tests when computing the rising rate of infections.

And more testing, including random testing on asymptomatic people, also provides a clearer picture of how many people do not have Covid, and can show where restrictions are working.

Liverpool used mass testing to prove cases were low enough to allow them to move from tier 3 to tier 2.

What proof is there that the new strain is spreading faster?

Last week, Government scientific advisers said there was a ‘high’ likelihood the new strain was spreading at a faster rate than other variants.

A number of factors suggest this could be the case.

The strain has been traced to London cases in September, and by November it accounted for a quarter of all cases.

By mid-December that number had risen to two-thirds.

The same pattern has been seen in Kent.

Scientists identified mutations to the spike protein on the outer wall of the virus, which allows it to enter our body’s cells.

Changes to the spike protein often mean the virus has become more efficient at achieving this but scientists have cautioned against drawing firm conclusions as a host of other factors could be responsible for the surge in cases.

The spread of any strain means people are not sticking to social-distancing rules.

But for young disabled people, not prioritised for the vaccine or increased supplies of rapid tests, the isolation is never-ending.

The Mail on Sunday has heard from many desperate parents, some under lenient tier restrictions, trapped in this nightmare.

One mother was told by care home staff she couldn’t even wave at her disabled daughter through a window at Christmas.

Another was banned from taking presents because there weren’t enough staff to help unwrap them.

Now campaigners are urging that disabled children be added to the official Covid-19 vaccine priority list.

‘Ten months on and the Government still hasn’t got a grip on Covid-19 in care homes for disabled people,’ says Louise Rubin, at disability equality charity Scope.

‘Part of the solution would be for those at risk to be vaccinated as soon as possible. Without action, I dread to think of the toll this pandemic will take on disabled people and their families in 2021.’

Scope and Mencap – the UK’s leading charity for people with a learning disability – have written to the Government, urging the Joint Committee on Vaccination and Immunisation to reconsider the priority list.

Few disabled children will qualify for the ‘extremely clinically vulnerable’ priority group. And even then, many will be waiting months. Josh has not been told if he will receive a vaccine.

In September, this newspaper told of young disabled people locked up in residential homes, barred from seeing their loved ones.

Many were distressed, with one young man self-harming to cope with the isolation.

A lack of clear Government guidance resulted in many services implementing their own draconian rules.

New official advice for care homes, published this month, urged them to facilitate visits where possible and even suggested home visits could happen with the help of 16million rapid tests supplied by the Government.

Many homes for older people are already welcoming regular visitors, with the use of weekly tests.

But experts say services for children and young people are yet to benefit. Josh Jones’s parents,

Nor has Kristin Donald, from Waverley, Surrey, whose son Sean, 24, has severe learning disabilities. He lives part-time in a residential home 45 minutes from his parents.

‘They only received the first box of tests last week and only one member of staff is trained on testing,’ says Kirstin, 41. Since March, she has seen her son just four times, totalling less than four hours, due to a strict visiting policy.

Hopes of a festive reunion were dashed when Sean’s area was placed into tier 4, and he became increasingly distressed. ‘When I told him, he kept groaning ‘Mummy’ over and over, and was very teary.’

Experts say a lack of specific guidance for the 30,000 children and young adults in care facilities is part of the problem. ‘Disabled people have been at the bottom of the pile,’ says Sheila Brown, of disabled children’s charity, NewLife. She calls Covid testing ‘patchy’.

‘We’ve heard of some disabled residents going online to book their own tests so they can have a safe visit. Sadly, a poor response to disability in the UK is nothing new.’

“Hezbollah Brigades” threatens Al-Kazemi: Do not test our patience

"Hezbollah Brigades" threatens Al-Kazemi: Do not test our patience