Paris St-Germain will consider a bid for Portugal and Juventus winger Cristiano Ronaldo if the Italian club decide to sell the 35-year-old. (Mail)

PSG are also in advanced contract talks with Brazil forward Neymar, with the 28-year-old happy to sign for another five years. (ESPN)

Arsenal are among a number of European clubs interested in Sao Paulo’s Brazil forward Brenner, 20. (Calciomercato – in Italian)

Leicester City have opened talks about a new contract with defender Jonny Evans. The Northern Irishman, 32, is entering the final year of his three-year deal. (Athletic – subscription required)

Chelsea midfielder Danny Drinkwater has commissioned his own highlights video in an effort to move away from the club. The 30-year-old has been training separately after falling down the pecking order at Stamford Bridge. (Mail)

Ivory Coast winger Nicolas Pepe, 25, has voiced his frustration at the lack of playing time he is getting at Arsenal. (Canal Plus, via Mirror)

Liverpool and Republic of Ireland goalkeeper Caoimhin Kelleher, 21, wants to go out on loan in January to increase his game time. (Liverpool Echo)

Free agent and former Arsenal midfielder Jack Wilshere, 28, says he would never be able to join Tottenham because of his ties to the Gunners. (Goal) 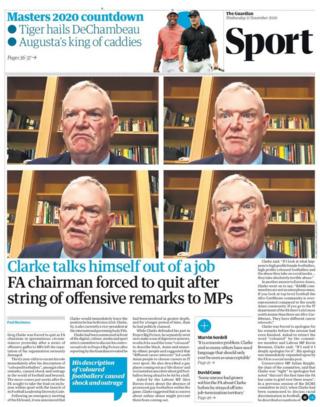 The back page of the Guardian

Bill Belichick: Resigning from New York Jets was 'one of the great moments of my career'

Lavrov: Russia is ready to cut ties with the European Union in response to new sanctions

The ballerina dancing on ice for a real ‘swan lake’