Former Arsenal defender Per Mertesacker suggests German midfielder Mesut Ozil’s focus has shifted away from football – the 32-year-old was left out of the Gunners’ Premier League squad on Tuesday. (Klick and Rush podcast via Mail)

Former Manchester United defender Rio Ferdinand believes manager Ole Gunnar Solskjaer is frustrated at how the board failed to land any of his top transfer targets in the summer window. (BT Sport via Express)

Tottenham are considering returning Gedson Fernandes, 21, to his parent club Benfica in the next transfer window. The Portugal midfielder joined Spurs on an 18-month loan deal in January. (A Bola, in Portuguese)

Former Celtic and Rangers midfielder Liam Burt, 21, was at Pittodrie for Aberdeen’s Premiership match with Hamilton as he continues his hunt for a club. (Daily Record)

Premier League managers stay in their jobs for the longest time in Europe’s top five leagues, a survey suggests. (Mirror)

Portuguese right-back Ricardo Pereira, 27, who had surgery on a knee injury, hopes he will be back playing for Leicester City within six weeks. (O Jogo, via Independent)

AZ Alkmaar say 13 players have tested positive for coronavirus, but their Europa League match with Napoli on Thursday will still go ahead as planned. (Mail)

Minister Vincenzo Spadafora has criticised Juventus and Portugal forward Cristiano Ronaldo for flying back to Italy from Portugal after testing positive for coronavirus. (Gazzetta dello Sport – in Italian) 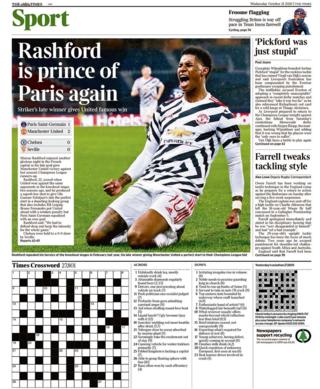 The Times back page