Manchester City are closely monitoring defender Sergio Ramos’ situation at Real Madrid with an eye to signing the 34-year-old Spain captain as a free agent this summer. (ESPN)

Belgium midfielder Kevin de Bruyne, 29, is set to reject Manchester City’s first contract offer and is concerned by the pace of negotiations with the club over a new five-year deal. (Times – subscription required)

Tottenham are not looking to sell or loan out England midfielder Dele Alli, 24, this month, but Argentina goalkeeper Paulo Gazzaniga, 29, and English defender Danny Rose, 30, will be allowed to leave. (Sky Sports)

Chelsea are willing to give Frank Lampard more time as manager, but the situation is under constant review, with Thomas Tuchel, Max Allegri, Brendan Rodgers and Ralph Hasenhuttl considered the primary options if he is dismissed. (Independent)

Former Chelsea striker Andriy Shevchenko, currently in charge of the Ukraine national team, is also being considered as a replacement. (Le10 Sport)

Arsenal have no plans to sell Mohamed Elneny, 28, in the January transfer window amid reported interest in the Egyptian midfielder from Besiktas. (Football London)

Arsenal have offered German midfielder Mesut Ozil, 32, to Juventus in recent weeks but the Italian champions see Sweden international Dejan Kulusevski, 20, as a future talent in that role. (CBS Sports)

Arsenal are monitoring the situation of Argentine Emi Buendia but have yet to make a formal offer for the 24-year-old Norwich midfielder. (Football London)

Arsenal are investigating a possible player-plus-cash deal for Buendia, to try and persuade Norwich to sell the highly-rated midfielder, with 21-year-old English midfielders Joe Willock and Reiss Nelson among the players they are prepared to offer the Canaries. (Independent)

But lucrative offers for Buendia, English full-back Max Aarons, 21, and English midfielder Todd Cantwell, 22, will be ignored over the next month as Norwich look to return to the Premier League. (Sky Sports)

Manchester United and Argentina defender Marcos Rojo, 30, has held talks over a move to Boca Juniors in his homeland, though a deal has still to be finalised. (Mail)

The form of Ivorian defender Eric Bailly, 26, could convince Manchester United not to pursue another centre-back this month. (Manchester Evening News)

Barcelona’s top three transfer targets are Liverpool’s Netherlands midfielder Georginio Wijnaldum, 30, Manchester City and Spain centre-back Eric Garcia, 19, and Lyon and Netherlands forward Memphis Depay, 26. But they face a difficult task to land them during the January transfer window and are more likely to target free transfers in the summer, when all three are out of contract. (Sky Sports)

West Ham have opted against re-signing Shanghai SIPG’s Austria forward Marko Arnautovic as the 31-year-old is considered too expensive. (Mail)

Bayern Munich are in talks to sign Reading’s England Under-21 full-back Omar Richards, 22, at the end of the season. (Telegraph – subscription required)

Bayern Munich and Austria utility player David Alaba’s wage demands are proving a stumbling block with regard to the 28-year-old’s prospective move to Real Madrid. (Goal)

Barcelona pulled out of the transfer race for Alaba due to financial instability. (Mail)

Leicester’s English midfielders Hamza Choudhury, 23, and Demarai Gray, 24, are both looking to leave the club this month. (Talksport)

West Brom boss Sam Allardyce says the majority of his signings this month will be made up of loans or short-term contracts. (Express & Star)

Aston Villa chief executive Christian Purslow has revealed the club will make a £20m loss in revenue if they play the whole season without fans. (Talksport, via Express & Star)

English winger Rolando Aarons is set to be the first Newcastle player to leave in the January transfer window with Huddersfield close to signing the 25-year-old. (Newcastle Chronicle)

Everton defender Jarrad Branthwaite, 18, was on the verge of being released by Carlisle as a youth player – and was only kept on because the head of their academy overruled his coaching staff. (Liverpool Echo) 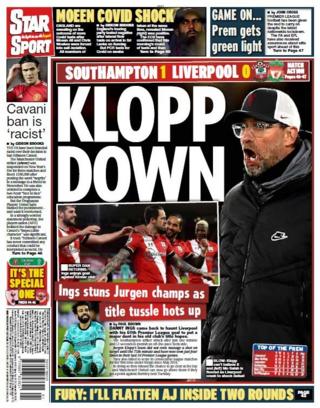 What hitting the gym means in 2021 during COVID