Manchester United are refusing to give up their pursuit of Borussia Dortmund’s England forward Jadon Sancho, 20. (ESPN)

Manchester United will allow Wales winger Daniel James, 22, to join Leeds United on loan, but only if they sign Sancho. (Sun)

Tottenham are considering another move for Inter and Slovakia defender Milan Skriniar, but are unwilling to meet the 25-year-old’s asking price. (Guardian)

Sheffield United have offered Liverpool £17m for England Under-21 striker Rhian Brewster and are prepared to include a buy-back clause in the deal. (Sun)

Lazio are in talks to sign the Manchester United‘s Brazilian midfielder Andreas Pereira, 24, on a season-long loan with an option to buy. (Telegraph)

Tottenham and Argentina defender Juan Foyth, 22, is a target for Valencia. (COPE – in Spanish)

Barcelona are closing in on a final deal for Ajax and USA right-back Sergino Dest, 19, but are unlikely to make any further signings. (Goal)

Lyon are prepared to sell 22-year-old French midfielder Houssem Aouar, who is being linked with a move to Arsenal. (Sky Sports) 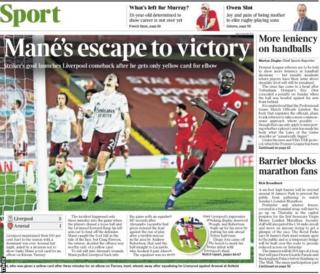 Cars, streets and homes in Norfolk seaside village of Walcott covered in sand after storm

Cars, streets and homes in Norfolk seaside village of Walcott covered in sand after storm