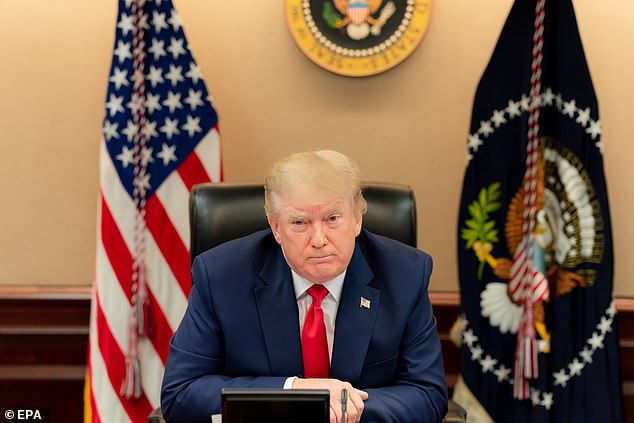 US President Donald Trump has claimed there were more votes than people who voted in some swing states in a late-night rant before his post was labeled as disputed by Twitter.

After 4am this morning, the President tweeted: ‘In certain swing states, there were more votes than people who voted, and in big numbers. Does that not really matter?

‘Stopping Poll Watchers, voting for unsuspecting people, fake ballots and so much more. Such egregious conduct. We will win!’

It linked to an article by VOANews which says ‘Experts and officials said there has been no evidence of widespread voter fraud in the 2020 US elections.’

Over the weekend, Trump continued his claims of election fraud as he alleged ‘big voter fraud information’ had been discovered in Georgia.

A handout photo made available by The White House shows US President Donald J. Trump as he participates in the Virtual Summit of G20 Leaders, organized by Saudi Arabia. from the Situation Room in the White House in Washington, DC, USA, yesterday

Biden was declared the winner in Georgia after a hand recount this week and Trump’s previous claims of fraud have been widely dismissed as his legal team has failed to supply any proof.

‘I believe that the numbers that we have presented today are correct. The numbers reflect the will of the people,’ Georgia Secretary of State Brad Raffensperger, a Republican, said of the result Friday.

The hand count showed Biden won by more than 12,000 votes out of about five million cast, according to data released by Raffensperger’s office Thursday.

‘Working as an engineer throughout my life, I live by the motto that numbers don’t lie,’ Raffensperger said during a news conference at the state Capitol.

Raffensperger, a self-described ‘passionate conservative,’ has endured criticism and insults from fellow Republicans – from the president to the chair of the state Republican Party – over his handling of the election. He acknowledged their feelings on Friday.

But Raffensperger, as he had repeatedly done before, defended the integrity of the process and the results.

Biden is the first Democratic presidential candidate to carry Georgia since 1992.

The Georgia result was announced as Trump returned to the White House briefing room on Friday to claim he had ‘won’ the election.

As Trump continued his refusal to concede, his supporters gathered for the third day straight on Friday on the steps of the State Capitol building in Atlanta and staged a ‘stop the steal’ rally attended by InfoWars conspiracy theorist Alex Jones.

It came after Georgia county’s board of elections voted to fire its chief clerk on Thursday after 2,600 uncounted ballots were discovered just before the district initially certified the results.

The Floyd County board met for about an hour on Thursday in a special session that ended with a vote to dismiss Floyd County Chief of Elections Clerk Robert Brady.

During a statewide audit earlier this week, election officials found the 2,600 ballots that were not counted in the earlier totals.

Election officials discovered that they failed to upload a memory card containing electronic counts of those votes on Election Day, according to the Athens Banner-Herald.

As a result of the discovery, election officials had to rescan more than 8,000 ballots to make sure there were no other discrepancies.

Of the 2,600 discovered ballots in Republican-leaning Floyd County, most of them went for Trump.

The new batch of ballots slashed Biden’s lead over Trump by some 800 votes – still not enough to overcome the Democrat’s advantage.