UEFA has refused a request from Munich’s mayor for a stadium to be lit in rainbow colours for Germany’s Euro 2020 match against Hungary on Wednesday in protest of an anti-LGBTQ law.

Mayor Dieter Reiter wanted to highlight legislation in Hungary banning school materials deemed to promote homosexuality and gender change and restricting the media from showing such content in programs accessible to minors.

The Allianz Arena, home to Bayern Munich, is configured to allow the exterior and roofing to be lit up in colours.

“UEFA, through its statutes, is a politically and religiously neutral organisation. Given the political context of this specific request, a message aiming at a decision taken by the Hungarian national parliament, UEFA must decline this request,” it said.

UEFA proposed alternative dates for Munich of June 28 or between July 3-9, around Christopher Street Day events held in memory of an uprising by homosexuals in New York in 1969. 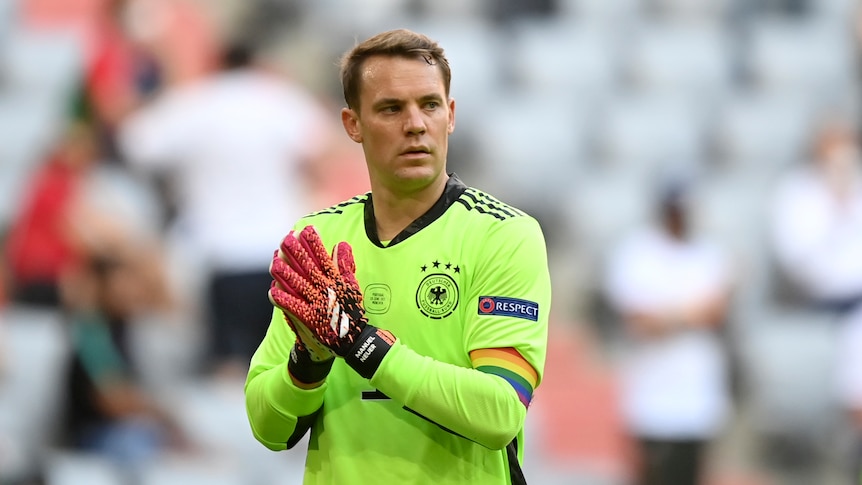 The ban on political symbols at Euro 2020 prompts a brief UEFA investigation into Germany’s Manuel Neuer wearing of a rainbow armband — but officials are still looking into alleged anti-LGBTQ and anti-racism incidents at Hungary games.

However, there was widespread criticism of its decision in Germany.

Bavarian premier Markus Soeder said lighting the stadium would have been a great gesture against discrimination, while Munich mayor Reiter said the German Football Association (DFB) should have shown more solidarity with public opinion.

“I think it is shameful that UEFA denies us making a mark for diversity, tolerance and solidarity,” Mr Reiter added.

The DFB had also backed making the gesture on a different date.

Germany coach Joachim Loew said he would have welcomed the move. “I would have been happy if the stadium had been lit up in these colours,” he told a news conference.

“As serious as symbols are, it is important that we live these values. In our team, this is the case.”

“Munich LGBTQ organisations are preparing for the Germany-Hungary match on Wednesday with a huge action, they will hand out 11,000 rainbow flags in and around the stadium,” Budapest Pride said.

Aside from rainbow flags flying proud inside Allianz, the city has vowed to decorate other landmarks.

Berlin’s iconic Olympic Stadium, as well as Bundesliga stadiums in Cologne, Frankfurt and Wolfsburg, will all be making powerful statements with rainbows displays on Wednesday morning.

“We are human and we are all sensitive to social matters,” he added. “But I believe that we have always shown, through our behaviour, that we all respect everyone and everything.”

But speaking to the media in Munich before the match, he was circumspect. “UEFA made this decision, we have no say in it,” Gulacsi said. “We focus on the match now, not this.”

Hungary’s Foreign Minister Peter Szijjarto, however, welcomed UEFA’s ruling. “Thank God that in the circles of European football leadership, common sense still prevails and they did not play along with the political provocation,” he said.

The State of Origin series is once again the focus of the rugby league world, with Game 2 to take place at Brisbane's Lang Park on Sunday night.NSW...