If 95 percent of Americans wore masks consistently, nearly 130,00 lives could be saved between now and March 2021, a new study suggests.

Without measures like masks and social distancing, however, the US coronavirus death toll is likely to exceed 511,000 by then, the latest research from the University of Washington’s Institute for Health Metrics and Evaluation (IHME) estimates.

As of now, fewer than half of Americans say they ‘always’ wear a mask when they are in public.

Realistically, the researchers don’t anticipate masking will become near-universal – it’s still a subject of heated controversy in much of the US.

But it will be critical that states don’t further relax restrictions like social distancing aimed at reducing the spread of coronavirus. Doing so, they warn, could result in more than one million Americans dying of COVID-19 by the end of February. 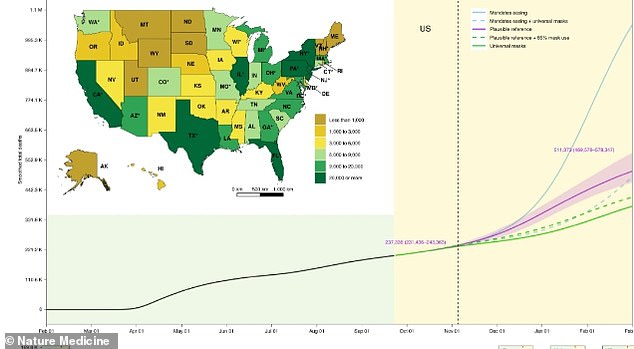 If no further restrictions are put into place and fewer than half of Americans  continue to  wear  masks, the coronavirus death toll will likely reach 511,000 by March (purple). If  95% of people  wore masks, nearly 130,000 lives could be saved. The highest burden of deaths (dark green) is predicted to be in states hard-hit early and those with large anti-mask contingents

Already, the pandemic has claimed the lives of well over 220,000 Americans, and the toll is rising by an average of more than 760 fatalities a day.

Most experts – including those at the IHME – predict that deaths will only rise more  steeply as we enter the colder winter months and gatherings move indoors where there is a greater risk of transmission.

President Trump has thrown his entire focus for combatting the pandemic on the availability of treatments and vaccines which he insists is imminent.

Meanwhile, he has mocked his campaign rival, 77-year-old Vice President Joe Biden, for wearing ‘the biggest mask you’ve ever seen’ and social distancing by ‘hiding in his basement,’ including during Thursday night’s final presidential debate.

And earlier in the week, President Trump incorrectly cited a CDC study as saying that 85 percent of people who wear masks catch coronavirus. 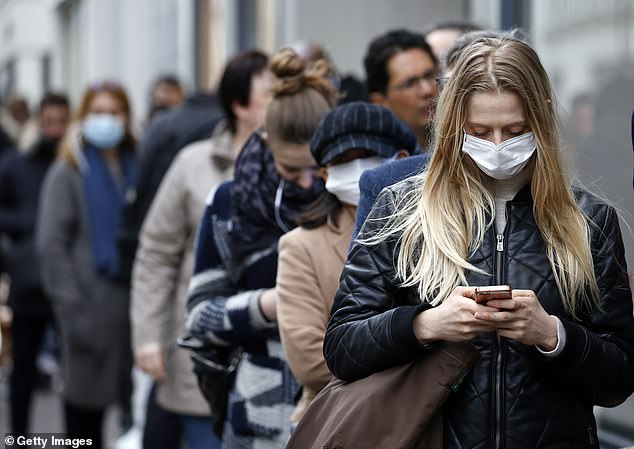 Fewer than half of all Americans wear masks in public ‘always,’ but near-universal masking hs been achieved in some neighborhoods of New York (file)

Many Americans share his disdain face coverings. More than 50 percent of people in the US only sometimes or never wear masks, according to the IHME study, published Friday in Nature Medicine.

Masks can reduce the risk of COVID-19 transmission by up to 30 percent, several  studies have shown.

But that has not convinced all Americans that they are worthwhile, and the IHME modelers hardly expect that everyone in the US will develop a more favorable view of masks.

‘Regardless, toward the end of 2020, masks could help to contain a second wave of resurgence while reducing the need for frequent and widespread implementation of [social distancing measures],’ they wrote in the new study. 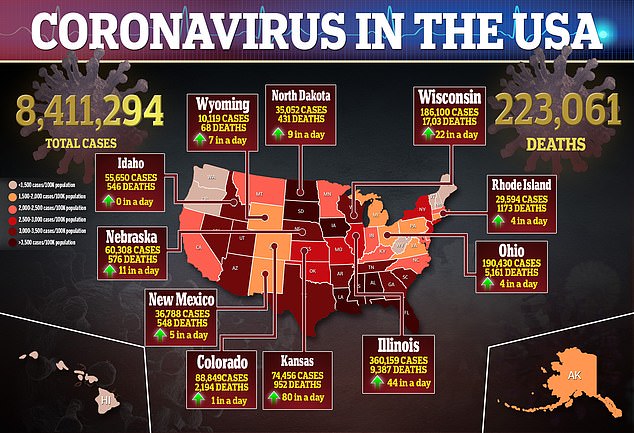 ‘Although 95 percent mask use across the population may seem a high threshold to achieve and maintain, on a neighborhood scale this level has already been observed in areas of New York.’

According to an August 20 New York Times report, 99 percent of people in the Flushing neighborhood of Queens reported wearing masks consistently when in public.

More than 60 percent of people in Virginia, Florida and California report ‘always’ wearing masks, according to the University of Washington study.

And in some countries, widespread adoption of masking has slowed the spread  and even effectively stopped it.

‘The potential life-saving benefit of increasing mask use in the coming fall and winter cannot be overstated,’ the University of Washington authors warned sternly.

‘It is likely that US residents will need to choose between higher levels of mask use or risk the frequent redeployment of more stringent and economically damaging SDMs; or, in the absence of either measure, face a reality of a rising death toll.’ 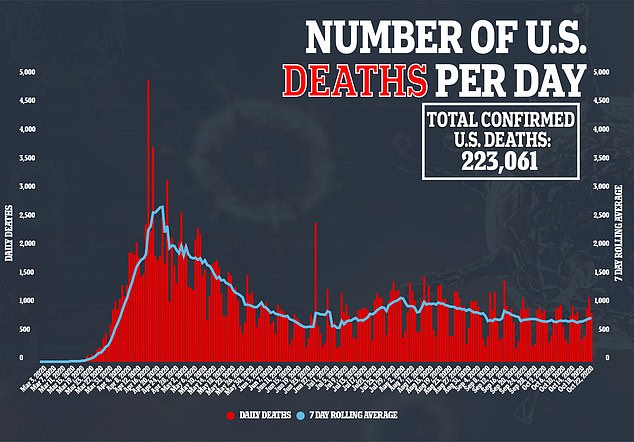 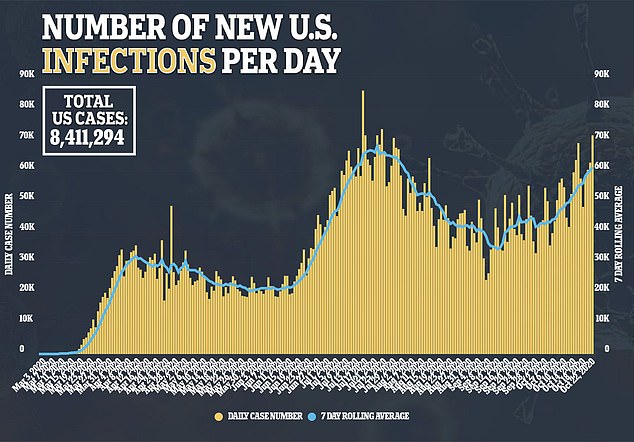 Public health officials have a tall task ahead of them to convince a largely mask-hesitant population to wear them consistently – and for months going forward.

Anti-lockdown and anti-mask protests persist across much of the US, even as cases rise precipitously in 38 out of 50 states, a recent report found.

The report, published in the American Journal of Public Health this month, found that thousands of anti-pandemic restrictions posts on Facebook mimicked the tactics of anti-vaxxers.

Specifically, they framed mask-wearing and social distancing not as public health issues, but as issues of civil rights and freedoms.

In addition to the political polarization that now weighs heavy on the question of masking, public health messaging often reaches the most vulnerable populations most slowly, if at all.

A CDC report published Friday found that poor US counties with large populations of minority people and people whose first language is not English are about 38-times more likely to become ‘hotspots’ of coronavirus outbreaks.

And part of the problem is that public health messaging, like guidance urging people to wear masks – is primarily English-forward.