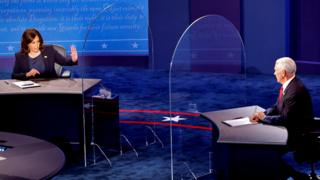 Vice-President Mike Pence and his Democratic challenger Kamala Harris have taken part in a televised debate ahead of the US elections on 3 November.

We’ve fact-checked claims on subjects including the handling of the coronavirus pandemic, the economy and the environment.

Verdict: That’s not right. Some people were exempt – it’s estimated that thousands still flew to the US.

Vice-President Mike Pence defended the US government’s response to coronavirus, claiming hundreds of thousands of lives were saved because President Trump suspended all travel from China, in the early stages of the outbreak.

Mr Trump issued an order on 31 January which stopped foreign nationals who had been in China in the previous two weeks from entering the US, which came into effect on 2 February.

But the order had exemptions for US citizens, legal residents, and non-citizen relatives with close ties. Flight data analysed by the New York Times shows 40,000 people arrived in the US directly from China in the two months after President Trump’s restrictions.

Harris: “The president said it [coronavirus] was a hoax.”

Senator Harris criticised President Trump’s handling of the pandemic, accusing him of calling it “a hoax” and said the administration “minimised the seriousness of it”.

President Trump did not directly call the virus a “hoax”.

He accused Democrats in February of “politicising the coronavirus” and mentioned the impeachment process against him, calling that a “hoax”.

He went on to say that criticism by Democrats of his handling of Covid-19 was “their new hoax.”

Pence: “Right after a time where we’re going through a pandemic that lost 22 million jobs at the height, we’ve already added back 11.6 million jobs.”

From March to April this year, more than 22.7 million Americans lost their jobs, according to the US Bureau of Labor Statistics.

Since then, around 11.4 million jobs have been added, but the unemployment rate is still much higher than before the pandemic.

The unemployment rate is currently 7.9%. It was 3.5% in February this year – before the outbreak in the US.

Harris: “Over thirty million people… in the last several months had to file for unemployment.”

Verdict: This is right for the overall number since February but current claims are significantly lower.

Unemployment insurance claims have topped 30 million since the start of the outbreak in February.

The number of claims has dropped in recent weeks and around 12 million are continuing claims, according to the US Labor Department.

Pence: “President Trump and I have a plan to improve healthcare and protect pre-existing conditions for every American.”

Verdict: There are no details about how the Trump administration plans to protect people with pre-existing conditions.

The Affordable Care Act (ACA), passed under President Obama, made it illegal to deny coverage to people with a pre-existing condition. The Trump administration has sought to repeal and replace it and now seeks to dismantle the law in the Supreme Court.

In September, President Trump signed an executive order which said: “access to health insurance despite underlying health conditions should be maintained”.

But there is no detail about how this will be done or funded.

Harris: “Trump said ‘there were fine people on both sides’ in far-right protests.”

Verdict: The quote is correct, but President Trump said in the same press conference that he wasn’t referring to neo-Nazis or white nationalists.

According to a transcript of a press conference on 15 August, President Trump did say – when asked about the presence of neo-Nazis at the rally – “you had some very bad people in that group, but you also had people that were very fine people, on both sides.”

However, at the same press conference, Mr Trump went on to say “I’m not talking about the neo-Nazis and the white nationalists, because they should be condemned totally.”

Pence: “They [the Democrats] want to … ban fracking.”

During the debate, there were testy exchanges about the future of fracking – the controversial technique used for extracting shale gas from underground.

However, in March 2020, during a Democratic debate, he said “No more — no new fracking.”

He later clarified it: “I said I would not do any new leases on federal lands.”

At a CNN town hall event in September 2019, Ms Harris said: “There’s no question, I’m in favour of banning fracking.”

Harris: “Because of a so-called trade war with China, America lost 300,000 manufacturing jobs.”

Manufacturing jobs have dropped under the Trump administration, but only since the coronavirus outbreak.

The latest data from the Bureau of Labor Statistics shows that, as of September, there were 179,000 fewer manufacturing jobs than when Trump took office.

Prior to the pandemic, the US added almost half a million during his first three years in office.

Pence: “Our air and land are cleaner than at any time ever recorded, our water is among cleanest in the world.”

Verdict: He is right about clean air (although this follows a long-term trend in the US) but not about water.

The Environmental Protection Agency (EPA) says the US currently has the cleanest air on record.

Over the past few decades, air quality – a measure of six major pollutants – has improved significantly in the US.

From 1970 to 2019, the overall level of these pollutants fell by 77%, according to the EPA. And this trend has largely continued into President Trump’s administration with a 7% fall between 2017 and 2019.

On water, however, the US is ranked 26th in the world on sanitation and drinking water, according to Yale University.

On this ranking, Finland, Iceland, the Netherlands, Norway, Switzerland and the UK have the cleanest water.