High street retailed WH Smith has fallen into a £226 million loss in the past 12 months amid the ongoing coronavirus pandemic.

Their pre-tax loss is three times more than analysts feared after forecasters previously described 2020 as a ‘write-off’ year for WH Smith.

But the 228-year-old company’s chief executive has said they have a ‘robust plan’ to help them ’emerge stronger’.

WH Smith said it had lost £226 million before tax in the 12 months to August, a swing from a £135 million profit a year earlier.

The latest figures are more bad news for the High Street which has been decimated by the coronavirus pandemic.

WH Smith said it had lost £226 million before tax in the 12 months to August, a swing from a £135 million profit a year earlier. Pictured, a store in London in August

It also comes as Britain reached the milestone of 50,000 deaths from the virus yesterday, while health chiefs announced another 595 victims – the highest daily count since May.

WH Smith chief executive Carl Cowling said: ‘Since March, we have been heavily impacted by the pandemic.’ 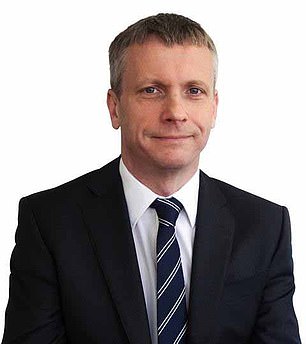 Announcing their results, WH Smith chief executive Carl Cowling said the the 228-year-old company’s has a ‘robust plan’ to help them ’emerge stronger’

He added: ‘While passenger numbers continue to be significantly impacted in the UK, our North American business, where 85% of passengers are domestic, is beginning to see some encouraging signs of recovery.

‘In addition, we continue to open new stores in the US and win significant tenders across major US airports.

‘In high street, we had seen a steady recovery and we were well set up both in stores and online as we went into the second lockdown. We currently have 558 stores open.

‘We have a robust plan across all our businesses focusing on cost management and initiatives within our control which support us in the immediate term and position us well to emerge stronger as our markets recover.’

The retailer, which currently has 558 high-street stores and 243 travel stores open, including 206 post offices and 135 hospital stores, said it expects underlying cash burn for November to be about 20 million pounds.

Founded more than 200 years ago as a news vendor in London, WH Smith expanded its portfolio of mainly high street stores to a host of major airports to take advantage of rising passenger numbers.

But the pandemic decimated global demand for travel earlier this year, and the retailer, which sells everything from books and sandwiches to headphones, suffered.

The company was forced to close hundreds of stores across the country as High Street footfall dropped.

Its travel arm, which has boosted the group with rapid growth in recent years, also saw revenues slump on the back of global travel restrictions.

The retailer previously announced up to 1,500 jobs could be axed amid warnings from Analysts at Investec who previously said they expected it to deliver a £73 million loss.

Around 300 of its 1,600 stores were kept open after the first lockdown – primarily those in hospitals and with post offices attached – but the chain is expected to be better sheltered this time around after newsagents were given the green light to stay open.

But in August the 228-year-old business said the dramatic fall in sales could force them to axe around 11 per cent of its workforce.

Man gets 50 yrs in gruesome killing of wife

MARTIN SAMUEL: It is a brave man that bets against Rory McIlroy completing the Grand Slam

Is this finally proof Covid DID leak from Wuhan lab?

Man gets 50 yrs in gruesome killing of wife