What did Real Madrid do in the last match at the Bernabeu before returning? .. Video 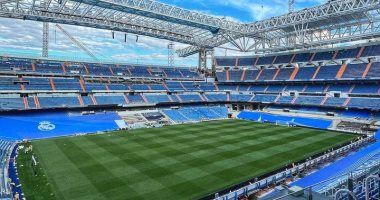 Real Madrid returns to play again at its stronghold, “Santiago Bernabeu”, in front of its guest, Celta Vigo, in the meeting scheduled for tomorrow evening, Sunday, in the fourth round of the Spanish League “La Liga”, after an absence that lasted for a year and a half after the comprehensive renewal process on the The stadium since March last year.

Real Madrid spent a huge budget for a comprehensive renovation plan for the “Santiago Bernabeu” stadium, in addition to increasing its seats to receive the largest number of royal fans, which currently reached 90,000 spectators.

And the pitch of the stadium is ready for the team to play its matches, whether local or European, in the presence of fans, but maintenance work will continue in some parts of it.

It was the last match that the royal team played in its stronghold before it was closed against its arch-rivals Barcelona, ​​and Meringue won a clean double, which came through the Brazilian Vinicius Junior and Mariano.

It is worth noting that Real Madrid played its matches during the last year and a half, during the closure of the Bernabéu stadium, at the Alfredo Di Stefano stadium.

Real Madrid had won in its last La Liga match before the international break at the expense of its host Real Betis, with a clean goal scored by right-back Dani Carvajal, to lead the competition with 7 points and a goal difference from Barcelona, ​​Valencia, Seville and Real Mallorca.

Aave has weakened more than 20% since the beginning of September. Should I buy this cryptocurrency at the current price? 2021