Countries relying on China‘s Covid vaccines may be vulnerable to future waves of the disease and may need to lock down longer, scientists warned today.

Experts told MailOnline the spiralling crisis in Chile should send a warning to the rest of the world that Chinese-made jabs are too weak to halt the spread of the virus, even with a successful immunisation programme.

At least 53 countries worldwide have ordered doses of the Chinese vaccines, many of which are developing nations in South America, Africa and South East Asia. The fact they are cheap and easy to store has made them ideal for countries which do not have the special equipment to keep other jabs at ultra-cold temperatures.

It comes after China’s top health official conceded that the efficacy of its vaccines were not ideal, in a rare public admission over the weekend. Gao Fu, director of the Chinese Center for Disease Control and Prevention admitted ‘protection rates of existing vaccines are not high’.

Despite fully vaccinating a quarter of its population and getting a single dose to 40 per cent, Chile has seen its infection rate more than double since mid-February, rising from 177 daily cases per million to 372. More than 80 per cent of the country has been forced to retreat back into lockdown, which was used by UK Government scientists as proof the UK is not out of the woods.

However, the South American nation is primarily using the CoronaVac vaccine, made by Chinese pharma giant Sinovac, which a University of Chile study found was only 3 per cent effective after the first dose, rising to 56.5 per cent two weeks after the second. Another study in Brazil found efficacy could be as low as 50 per cent, which just meets the World Health Organization’s threshold for an acceptable vaccine.

For comparison, the Pfizer-BioNTech and Moderna vaccines have efficacy rates of 95 per cent and 94 per cent, respectively, while Oxford University-AstraZeneca’s is about 79 per cent. Trials of tens of thousands of patients given the American and British jabs found they stopped 100 per cent of hospitalisations and deaths, compared to CoronaVac’s 84 per cent.

Another Chinese-made vaccine made by state-owned pharmaceutical firm Sinopharm appears slightly better than the CoronaVac, 73 per cent efficacy against symptomatic illness. However, because China has refused to publish robust trial data in a medical journal means experts cannot be sure how effective the jab really is. But Mr Gao’s remarks over the weekend suggest even Chinese officials are not confident in the vaccine.

Scientists fear the Chinese jab allows too many people to slip through the cracks of immunity, leaving a significant proportion of the population vulnerable to falling severely ill with the disease. But they admitted a jab above 50 per cent efficacy is better than none.

Professor Ian Jones, a virologist at the University of Reading, told MailOnline the figures from Chile ‘suggest the Chinese vaccines ‘will not be enough to stop the virus circulating’.

How do the Chinese vaccines compare to other approved jabs? CoronaVac, made by Chinese pharma company Sinovac, was found to be just 3 per cent effective at stopping symptomatic illness after the first dose, rising to 56.5 per cent two weeks after the second. Another Chinese-made vaccine made by state-owned pharmaceutical firm Sinopharm appears slightly better than the CoronaVac, 73 per cent efficacy against symptomatic illness 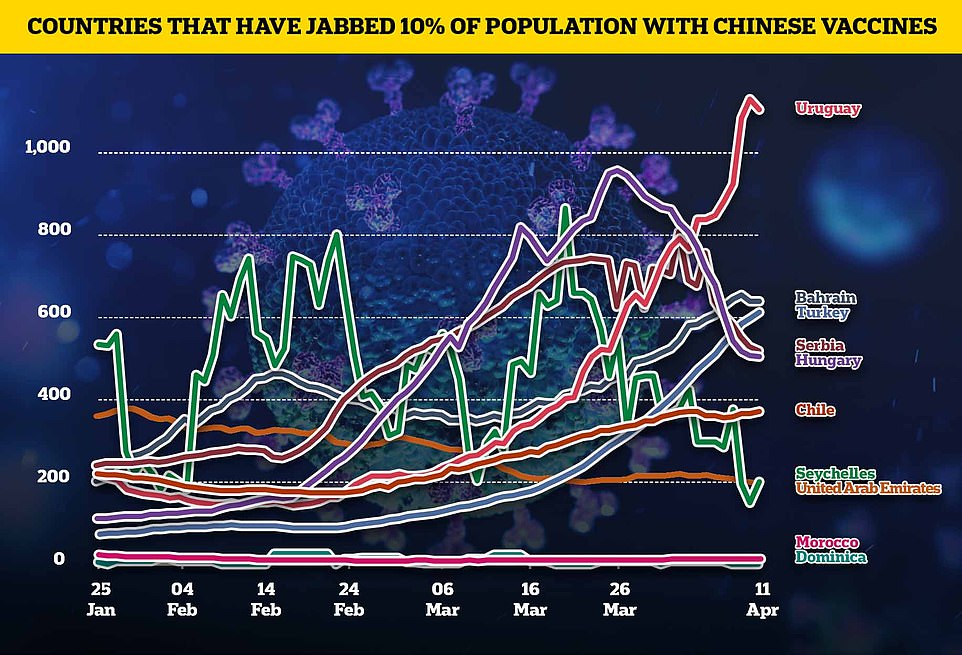 Only 10 countries to have placed orders of the Chinese vaccines have immunised more than 10 per cent of their populations, making it difficult to discern how well the jabs are working in the real world. Those countries are: Uruguay, Bahrain, Turkey, Chile, Seychelles, the United Arab Emirates, Morocco, Dominica, Serbia and Hungary 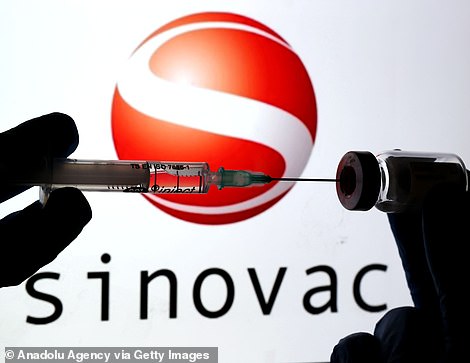 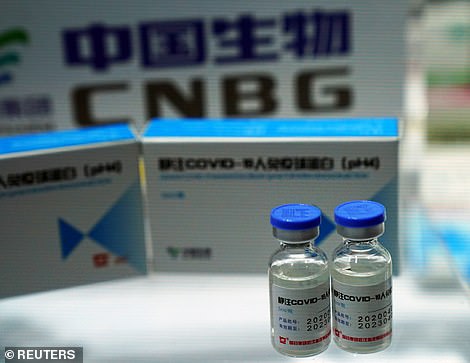 At least 53 countries worldwide have ordered doses of the Chinese jabs, made by Sinovac (left) and Sinopharm (right) many of which are in developing nations in South America, Africa and South East Asia

Both Sinovac and Sinopharm’s jabs are made from inactivated versions of coronavirus which have been genetically modified so they do not cause illness.

Professor Jones said his guess was that the technology was behind the low efficacy, adding: ‘I assume it’s the whole inactivated virus vaccine. They are quick to make but they contain virus proteins which are irrelevant as far as protection goes so, in effect, a good proportion of what you receive is wasted.’

Professor Gabriel Scally, a public health expert at the University of Bristol, told MailOnline the crisis in Chile ‘was not a great tribute to the Chinese vaccines’.

He added: ‘They haven’t been approved by any of the major medical regulators and there is very limited research evidence, they certainly don’t appear to have a high level of effectiveness in the real world. And in the absence of data it’s very difficult to know [how effective they really are]. The only benefit of them is the fact they’re cheap.’

On whether countries rolling out Chinese vaccines should fear a resurgence of the virus, he said: ‘I think they would have a right to be worried.’

But he admitted that a vaccine that’s partially effective is better than none at all. ‘That 50 per cent mark is the line in the sand that’s drawn by the WHO, which is great. But I think it’s beginning to dawn on people that these [Chinese] vaccines aren’t going to solve the problem completely.’

Professor Scally said the UK was ‘in a different place’ because it has highly effective vaccines in its arsenal, adding: ‘As long as we take it easy [coming out of lockdown] we should be fine.’

It has been suggested that China’s attempt to supply the developing world with Covid jabs is the country’s attempt at diplomacy. Professor Scally told MailOnline: ‘Whether it’s diplomacy or not, I don’t know, I happen to think it’s just China being China. 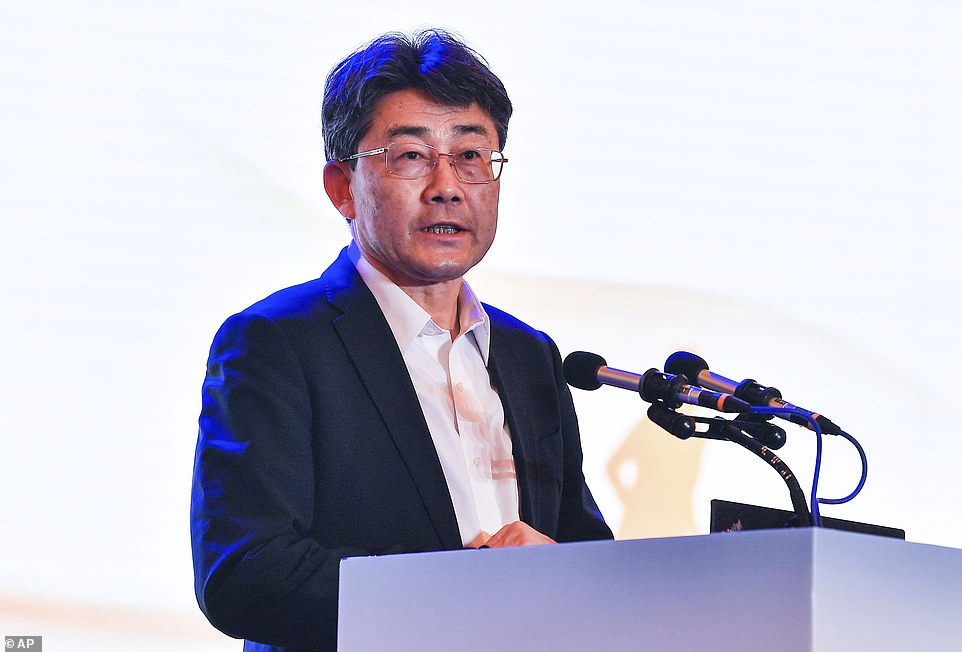 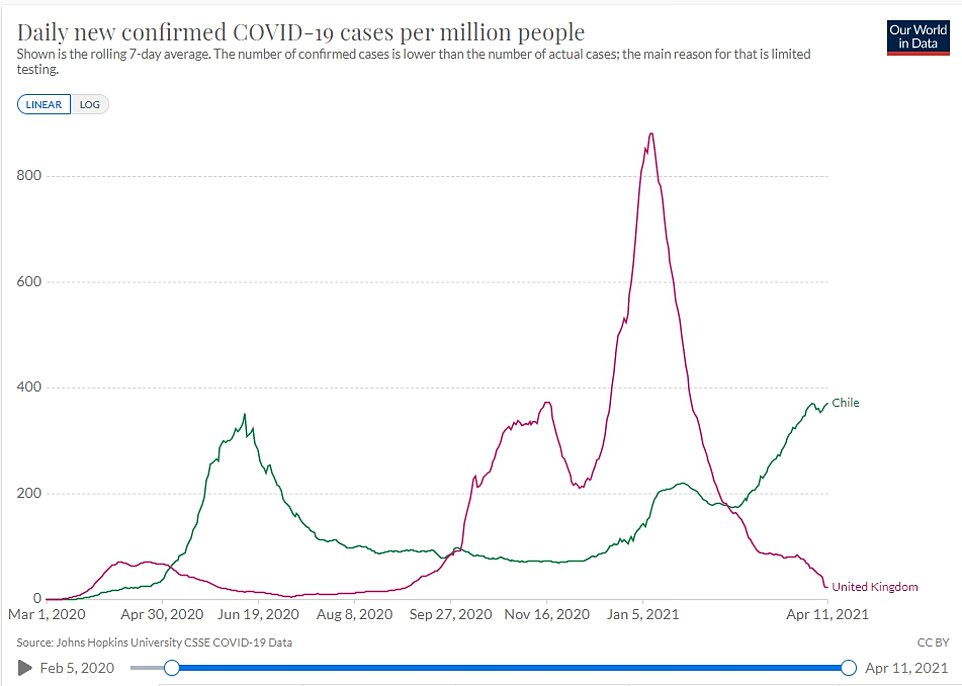 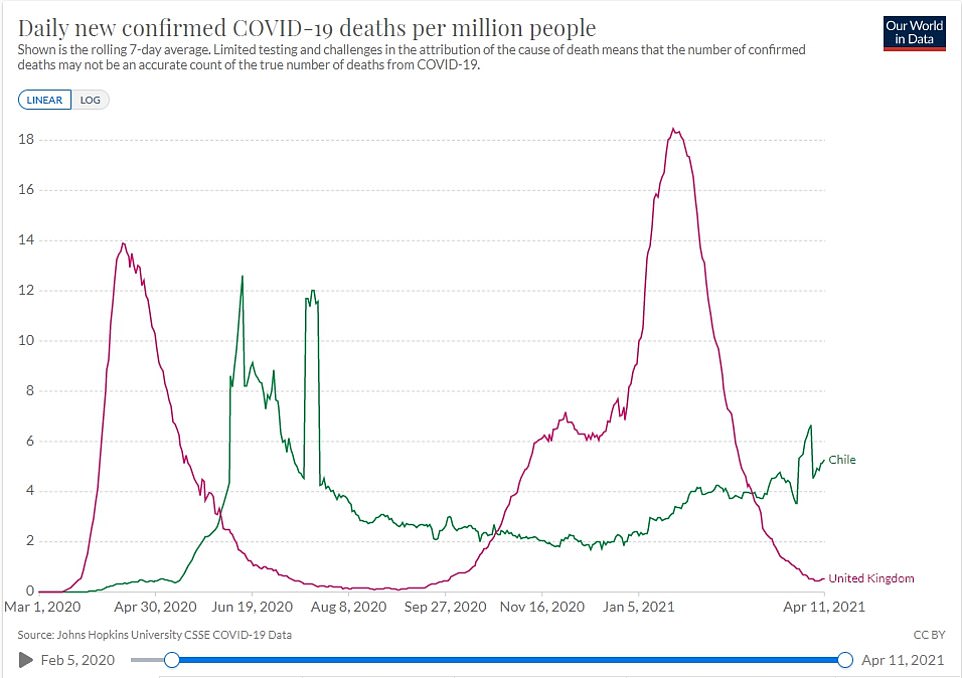 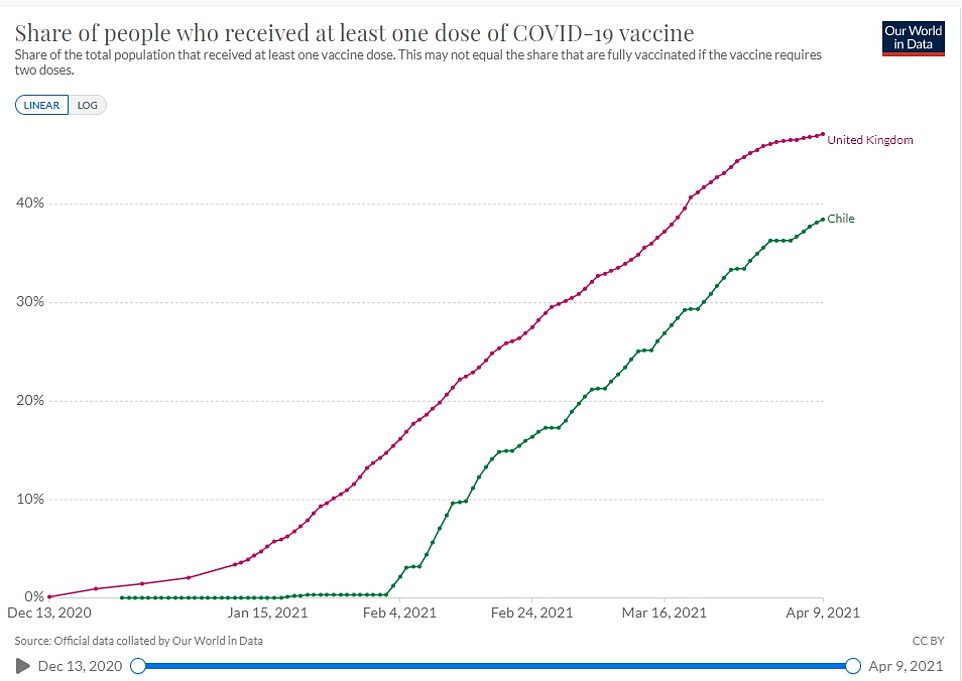 ‘China has a very strong economic outreach, that’s their modus operandi – whether it’s buying farmland in New Zealand or investing in companies in the UK, that’s just China being China.’

Since Mr Gao’s comments over the weekend, Beijing has put out an interview with the official claiming that his comments were ‘a complete misunderstanding’, in a bid to save face.

Global Times, a state-run nationalist tabloid, quoted Mr Fu as saying: ‘The protection rates of all vaccines in the world are sometimes high, and sometimes low. How to improve their efficacy is a question that needs to be considered by scientists around the world.’

Many of the orders for China’s vaccines have been placed by developing nations such as Zimbabwe, the Congo and Brunei, but a number of European countries have also started using them.

Hungary and Serbia, which have raced ahead of the rest of the EU in terms of vaccines administered, have both been scorned by the bloc for deviating from the its official rollout schedule.

But only 10 countries to have placed orders of the Chinese vaccines have immunised more than 10 per cent of their populations, making it difficult to discern how well the jabs are working in the real world.

The nations are also using a mixture of vaccines, for example Chile is vaccinating a smaller number with Pfizer’s jab and Serbia and Hungary are also using the Russian Sputnik V jab, making it even more difficult to see the effect of the Chinese vaccines.

Professor Jones told MailOnline: ‘The trends could be the result of anything, better social distancing measures, age structure etc.

‘And at only 10 per cent or less for usage, the numbers of immune people will not influence the spread yet so I don’t think you can say much about the vaccine effect (or lack of it) in those countries.

‘However, the 3 per cent, 56 per cent figures (for CoronaVac) coupled with the CDC (Chinese health institute) statement do suggest it will not be enough to stop the virus circulating, particularly if it’s a variant that also dodges some of the response.

‘Whether it’s enough to stop serious Covid and so address the hospitals clogging up and the CFR I guess remains to be seen.’

However, during his press conference on Saturday, Mr Gao revealed China, which has vaccinated around 160million people, was now considering using different jabs. He said: ‘It’s now under formal consideration whether we should use different vaccines from different technical lines for the immunisation process.’

His remarks are the biggest clue yet that the Chinese vaccines are not performing as well as hoped in the real world.

But Chilean science minister Andres Couve leapt to the defence of the vaccines yesterday following the backlash. He revealed Chile’s health ministry will shortly publish a real world study on the efficacy of the CoronaVac vaccine.

He said it was important to focus on the data and the vaccine’s effectiveness in reducing illness that required medical treatment or being hospitalised or dying, which he suggested it was doing.

‘The University of Chile study and the study the health ministry will release say the same thing: the number of people who fall ill and are hospitalized has decreased,’ he told local newspaper La Tercera. ‘We are going down the right path.’

About 8million people have been given at least one vaccine in Chile, most of whom received the Chinese-made jab.

Yet some experts have still pointed to Chile as a warning that easing restrictions in the UK too soon could lead to another nasty virus surge.

Sir David King, former chief scientific adviser to the Government, told Sky News today: ‘From the point of view of the population itself, we’re all dying to get out of lockdown.

‘From the point of view of the epidemic, I think it’s all a little bit more worrying.’

He added: ‘Chile is a country where the rate of vaccination amongst the population was third highest in the world – they were ahead of us in terms of the number of people who have had the vaccine – and they’re suddenly now into a third wave.

‘They now have 7,600 cases a day and the total number of people in Chile now who have Covid is over a million.

‘So what has happened in Chile is very, very surprising – a high percentage of people have been vaccinated, but here’s a variant of the disease coming through the country.’

England’s chief medical officer Chris Whitty told a Downing Street press conference last week: ‘We want to do things in a steady way because the assumption that just because you vaccinate lots of people, then the problem goes away, I think Chile is quite a good corrective to that.’

WHICH COUNTRIES ARE USING CHINESE-MADE VACCINES?

China has said it is giving ‘vaccine aid’ to around 50 countries.

There are about a dozen Chinese vaccine candidates for Covid-19, but only five frontrunners have received approval from medical regulators.

* denotes old data, with all of the above jab figures compiled by the Oxford University-led OurWorldInData statistics tracker