Woman, 23, who rushed to hospital with agonising period pains is stunned to discover she’s in labour


A woman who thought she was suffering from severe period pain was left stunned when doctors told her she was in labour – with a baby that was a week overdue.

Holly Henton, 23, from Market Harborough, Leicestershire, had been having regular menstrual cycles when she started experiencing stronger than usual cramps while closing up the coffee shop she works at earlier this year.

As the pain increased, she collapsed and her worried mother called an ambulance – and hospital medics told the shocked pair that Holly was actually 41 weeks pregnant and moments away from giving birth.

Holly, who had no pregnancy symptoms, was rushed into theatre where her son Theo was born weighing 7lb 14oz by emergency C-section. 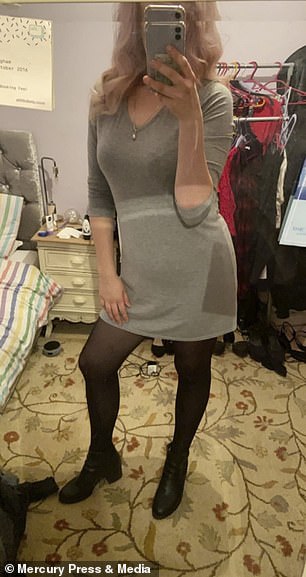 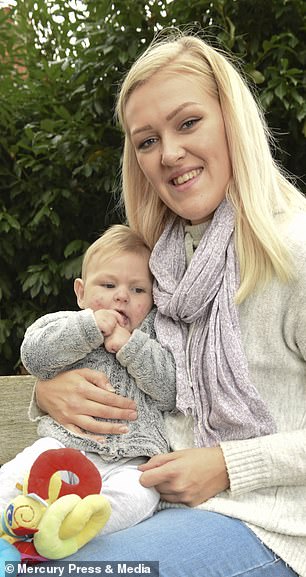 Holly Henton (pictured left, while six months pregnant), who thought she was suffering from severe period pain, was left stunned when doctors told her she was in labour – with a baby that was a week overdue. PIctured right: Holly and her son recently 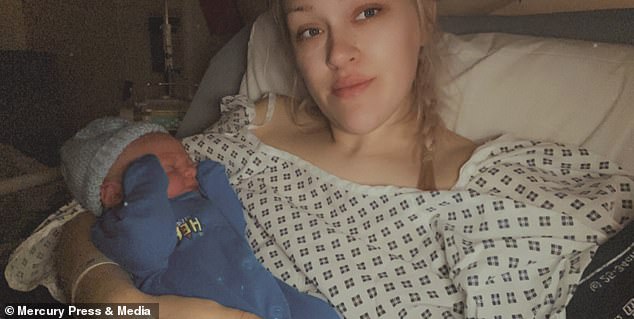 Holly (pictured following the birth of her son), 23, from Market Harborough, Leicestershire, had been having regular menstrual cycles when she started experiencing stronger than usual cramps while closing up the coffee shop she works at earlier this year

Now a proud single-mother to seven-month-old Theo, Holly says she can’t imagine her life without him.

She said: ‘I was still getting my periods as normal and there was nothing unusual going on. I’d put on a little bit of weight but it was just after Christmas and nothing that you would make you think I’m having a baby.

‘I’d put on a couple of pounds but it was around my bum and thighs so I thought it was just from overindulging on chocolate over the festive break.

‘I hadn’t had any of the normal symptoms, no cravings, sickness or nausea either.’

Recalling the moment she discovered she was having a baby, Holly said: ‘When they told me I was 41 weeks pregnant I went into shock. I knew I wanted kids one day but further down the line when I was in a happy healthy relationship and older. 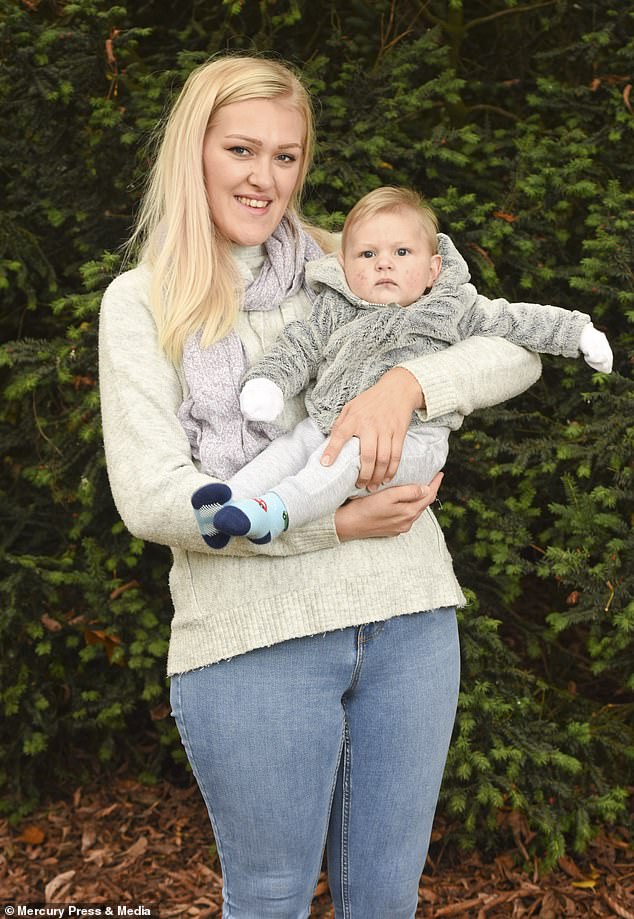 As the pain increased, Holly (pictured recently with her son Theo) collapsed and her worried mother called an ambulance 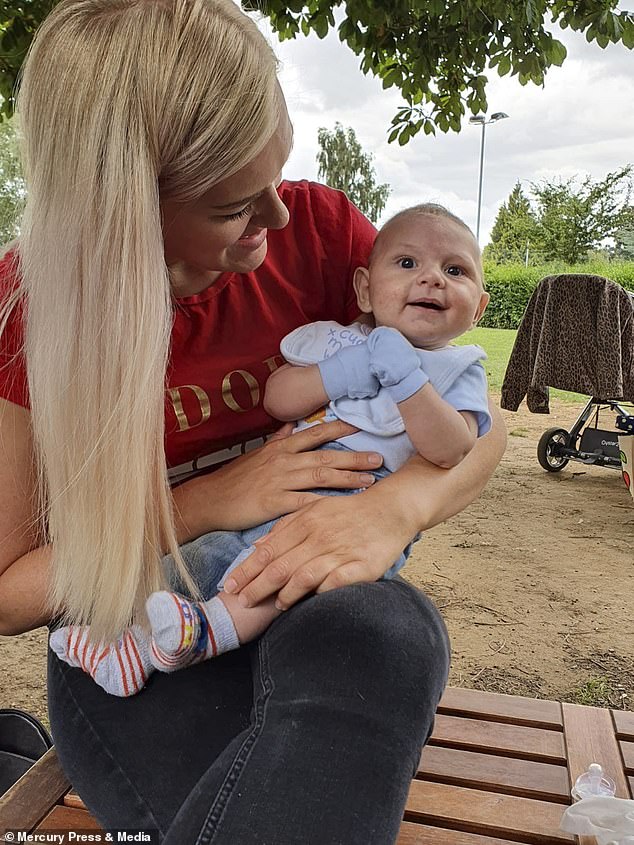 ‘I was 22 and had no idea I was pregnant so I had still been smoking and going out drinking every weekend with my friends.

‘I used to cover the early shift at Costa so I would get there for 5am and have four coffees before we’d even opened and another two or three during the day. I wouldn’t have done any of that had I known but luckily Theo was still perfectly healthy.

‘It’s been emotional and stressful but it’s also been amazing watching him grow and seeing my bond and connection grow with him everyday, I wouldn’t change anything for the world.’

Despite putting on a few pounds, Holly had no common symptoms and was having regular periods until the day she was rushed to hospital.

A barista at Costa Coffee, she had just helped to shut up her shop for lockdown when she started getting cramps, but dismissed them as pre-menstrual pains.

How common are cryptic pregnancies?

One in 450 pregnant women in the UK don’t know they are going to have a baby until week 20 of their pregnancy (half-way through), and one in 2,500 women are oblivious to the fact until they go into labour.

It’s a phenomenon known as cryptic pregnancy – also referred to as ‘pregnancy denial’.

Cryptic pregnancies typically affect either young women, who have never experienced a pregnancy, or women who believe they’ve gone through the menopause and who choose not to use contraception.

Women with erratic menstrual cycles are also more likely to miss signs they are expecting. This is especially true among women with polycystic ovary syndrome (PCOS), where small cysts grow on the ovaries; the hormone imbalance often leads to irregular or non-existent periods.

Yet there are some women who will continue to have monthly bleeds throughout their pregnancy. In this case, a scan at the local GP may be the only method of confirmation.

Women may simply not expect to find they are pregnant if they are taking the Pill – but then those taking it religiously can still become pregnant.

Eight in 100 women can get pregnant while on the Pill – usually not because of problems with the Pill, but with the taker, either because they’ve missed the Pill, thrown up or had diarrhoea. 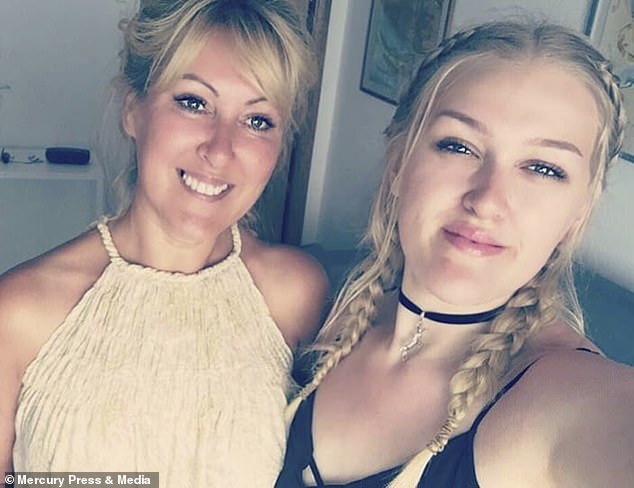 Holly (pictured with her mother), who had no pregnancy symptoms, was rushed into theatre where her son Theo was born weighing 7lb 14oz by emergency C-section

When normal painkillers did nothing, she became more concerned but it wasn’t until she collapsed on the toilet in the early hours of the morning that her mother, Joanna, 54, decided to ring an ambulance.

Eventually Holly was taken to Leicester Royal Infirmary for initial checks before she was transferred to Leicester General, where a gynaecologist confirmed she was 41 weeks pregnant, but as her waters still hadn’t broken she would need an emergency C-section.

She said: ‘I started getting pains but I was due on my period so I thought it was just cramps and took some paracetamol. That didn’t touch it and the pain was getting steadily worse.

‘I woke up at 5am in excruciating pain and went to the toilet but I couldn’t get back up, the pain was so bad. When I got to the hospital they were asking about my periods but they said it was probably just water retention.

‘They did a physical exam and said they felt something weird, so they did an ultrasound and noticed a mass. When I saw the gynaecologist he told me I was pregnant but I was just stunned, I didn’t even believe him at first. 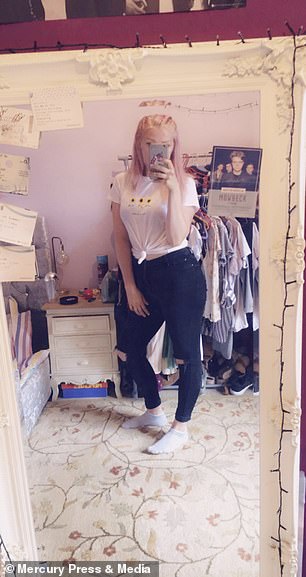 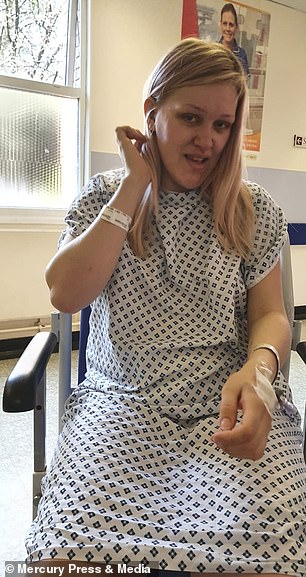 Now a proud single-mother to seven-month-old Theo, Holly (pictured while pregnant, left, and right in hospital before giving birth) says she can’t imagine her life without him 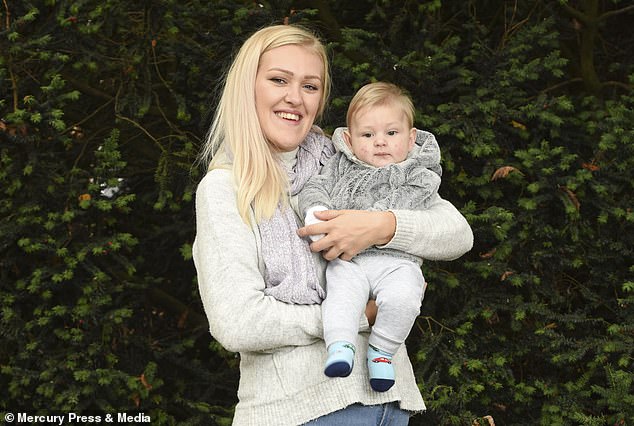 Despite putting on a few pounds, Holly (pictured with her son) had no common symptoms and was having regular periods until the day she was rushed to hospital 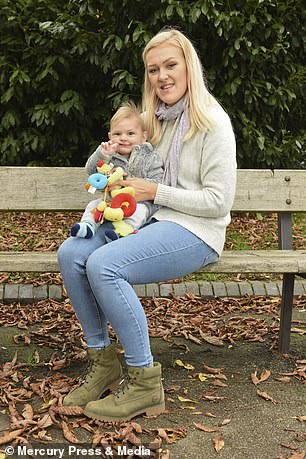 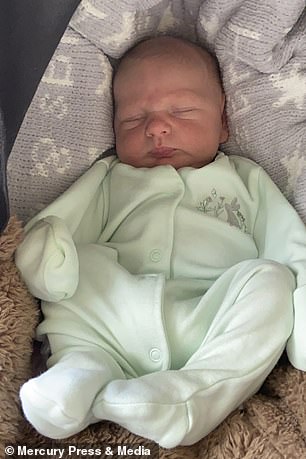 A barista at Costa Coffee, Holly (pictured with her son, left) had just helped to shut up her shop for lockdown when she started getting cramps, but dismissed them as pre-menstrual pains. Pictured right: Theo as a newborn

‘After that it was all kind of a blur, it didn’t even feel real, everyone was rushing around me and I just remember shaking and feeling like I was going to pass out because I was so scared.’

Holly added: ‘When they took the baby out and passed him to my mum that’s when it hit me. I broke down in tears and said I’m not ready for this, I’m going to be a single mum, how are we going to manage.

‘There wasn’t that instant connection you have when you’re planning to have a baby and looking forward to it, but I told myself I needed to get on with it and look after this baby.’

Although Holly was able to have her mother there for the birth, she was forced to spend the majority of her four days in hospital alone struggling to process what she had been through.

But after a few weeks, with the support of her mother and friends, the new parent started developing a special bond with her little boy.

Having split with her ex last August, the single mother reached out to Theo’s dad to tell him the news and now the pair have decided to stay friends, working together to raise their surprise son.

‘I didn’t tell people for a few weeks because I was still coming to terms with it myself, but when I did tell people everyone was amazing, they were coming round with nappies, clothes and all sorts for Theo,’ said Holly.

‘My mum was amazing, she was running around getting everything ready for us coming home and was teaching me and showing me how to do things.

‘After a while I started to feel like I was falling in love with him because he was always so happy and content. I would pick him up and he would start smiling and I realised maybe this baby is exactly what I need. I’m so happy now, I can’t imagine my life being any different.’

Mike Pence: 2.9 million doses of Corona vaccine have been distributed to states before the end of the week

Vice President Harris continues to refuse to visit the U.S.-Mexico border or take a serious assessment...