Travelodge ‘receptionist’, in her 20s, is found stabbed to death at hotel in Bournemouth after guests found blood smeared on the walls as man is arrested on suspicion of murder

By Rebecca Camber, Crime Correspondent For The Daily Mail and William Cole and Mark Duell for MailOnline

Detectives are quizzing a suspected knifeman after the death of a woman in her 20s at a seaside Travelodge hotel.

The body of the woman, said to be a hotel receptionist, was found early yesterday morning after a man walked into Bournemouth police station in Dorset to report the murder.

Horrified hotel workers said she had been stabbed as she worked a night shift. A guest at the hotel said he left his room at 7.30am to find blood smeared across a wall and a member of staff who had found the woman calling 999.

Paul Ford said: ‘She was lying in a corner near the reception and the bar area. There was one of her colleagues leaning over her on the phone, he was in total shock.

‘I asked him if she was dead and he nodded, he was asking me to keep away, it looked like she had been stabbed in the stomach. There was so much blood, over the walls and all over the floor.’ 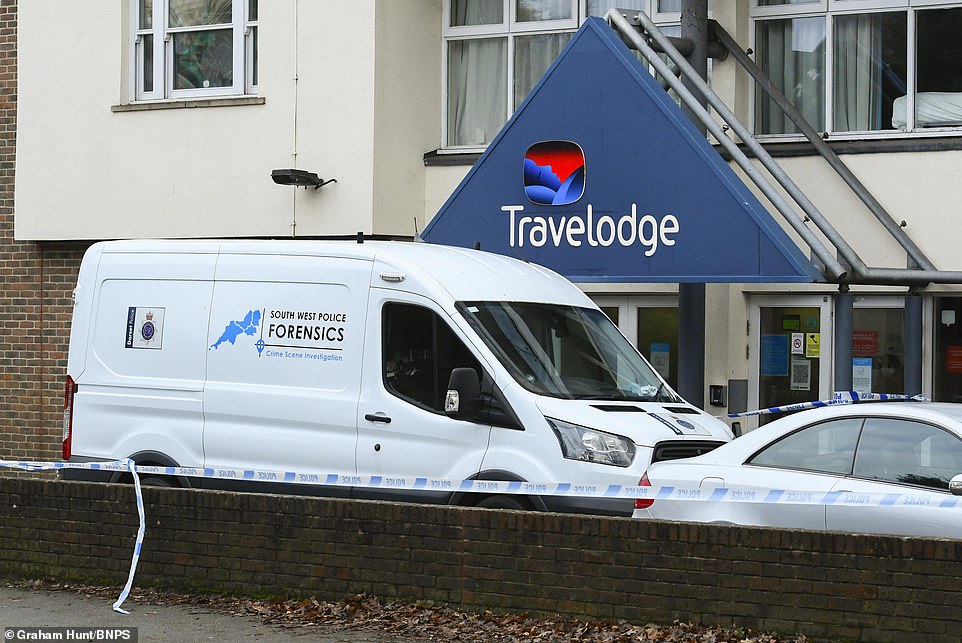 Speaking to the Sun, he added: ‘One of my friends had been down for a cigarette at around 1am and had spoken to her then. She was on her own, covering the reception.’

Other guests told how they were held for questioning for hours.

Gary Sheridan said: ‘I was told by the hotel manager that a woman had been murdered. I heard she had been stabbed. The police asked me whether I had heard any screaming or any noises or running.

‘I did hear noises but I just thought that was people getting up in the morning and maybe they were late for work and were running down the corridor around 7.30am.

‘I was told there were bloody footprints up the stairs. But I didn’t see this as I went down for milk and coffee and that’s when the police stopped me and started asking questions. They didn’t allowed me to leave until 1.30pm.’

The wife of an electrician wrote on Facebook that he had been detained for questioning along with seven other guests.

Becci Pearce said: ‘My Kev is at work at Bournemouth in Travelodge. Went to leave for work this morning and the poor woman from reception is dead, been stabbed. 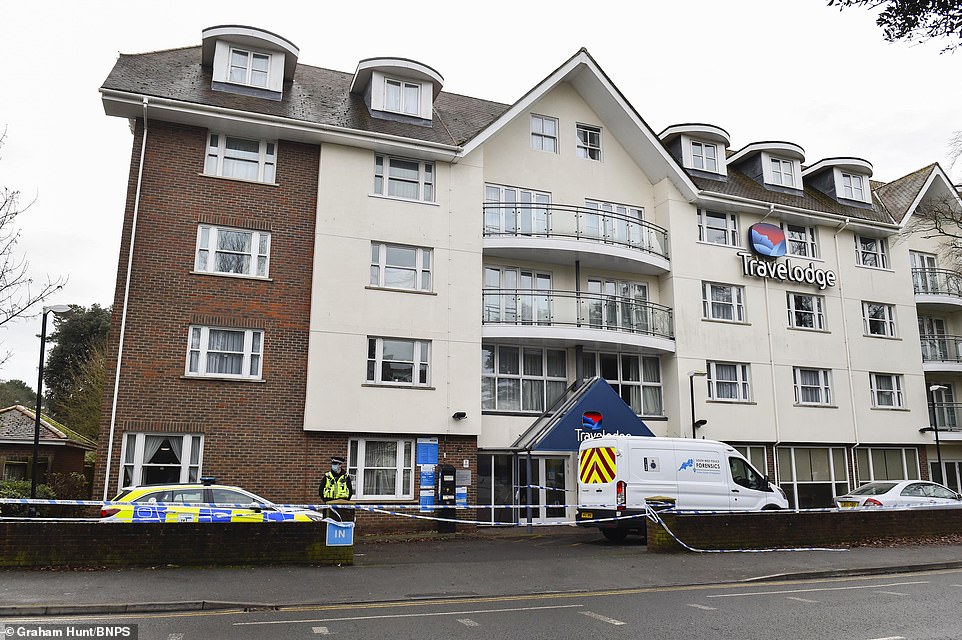 ‘I feel sick, absolutely awful. There was a man leaning over her on the phone to the ambulance but he said she’s stiff. She must of been there hours. Kev said there’s blood everywhere.’

She added: ‘I’m OK, just was shocked its awful like something from a movie. Someone has apparently been arrested so hopefully they can get out soon, there was blood trailing up all the stairs.’

Dorset Police were today questioning a 32-year-old man arrested on suspicion of murder. Detective Chief Inspector Jez Noyce said: ‘Our thoughts are with the family of the woman at this extremely difficult time.

‘We are carrying out a full investigation into this matter and officers have been speaking with those guests who are staying at the hotel.

‘I would urge anyone who witnessed or heard anything suspicious in the area of the Travelodge in Christchurch Road this morning.

‘I would also like to thank guests at the hotel for their patience and understanding while we have been carrying out enquiries at the scene.’ 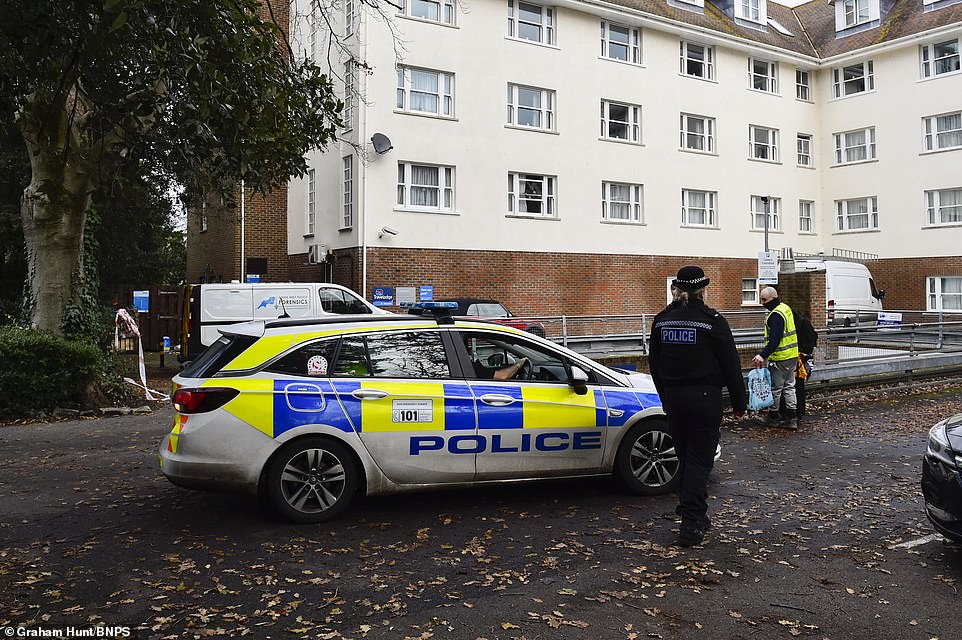 A Travelodge spokesman said: ‘We are deeply saddened to hear that a woman has died at Bournemouth Travelodge.

‘Our thoughts and sincerest sympathy are with her family and our priority right now is to support the police with their investigation. As this is a live police investigation we cannot make any further comment at this stage.’

A spokesman for Dorset Police said: ‘A man has been arrested on suspicion of murder in connection with the death of a woman at a Bournemouth hotel.

‘Police were called at 8.01am yesterday to a report that a woman, aged in her 20s, had very sadly been found deceased at the Travelodge hotel in Christchurch Road.

‘Her family has been informed and is being supported by specially-trained officers. Officers attended the scene and a cordon was put in place. A 32-year-old man from Bournemouth attended Bournemouth police station and has been arrested on suspicion of murder.

‘He is assisting detectives with their inquiries. An investigation into the death, which is being treated as suspicious, is being led by Dorset Police’s Major Crime Investigation Team (MCIT).’

Champions League last-16 draw: Date, time and how to watch plus who can English sides get?

JAN MOIR: Why Harry and Meg are the new Smashie and Nicey (shame it’s not all for charidee)