Your guide to some of the world’s most popular flatbreads

Throw a dart at a map of the world, and chances are you’ll hit a place known for a local take on the culinary wonder that is flatbread. Well, that is unless you hit an ocean, where conditions are far too soggy for the dough to set quite right. But here on dry land, there are plenty of regional variations for you to chew on. 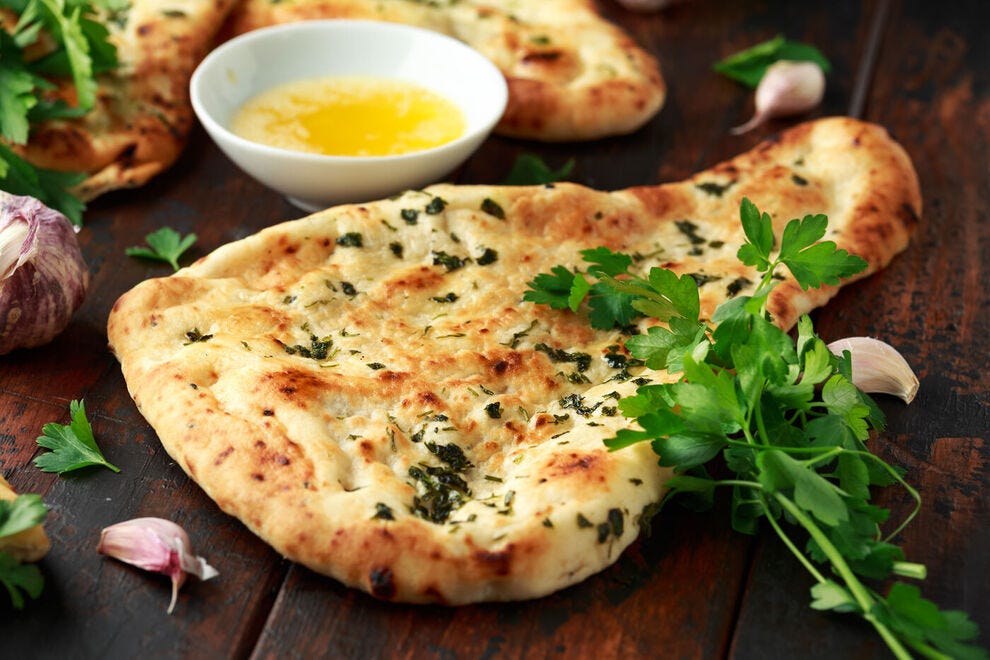 Anyone reading this already knows about naan, but we couldn’t resist leading with this photo anyway — Photo courtesy of iStock / DronG

Flatbreads can be leavened – in which yeast is added to the dough and left to rise – or unleavened combinations of just flour, water and salt. It takes just those three simple ingredients to form a flatbread, which is likely why flatbreads predate even the agricultural revolution by thousands of years. In fact, an archeological dig in 2018 found crumbs from a flatbread in northeastern Jordan dating back 14,400 years.

From arepas to tortillas, here’s how the world makes, bakes and best enjoys its flatbreads. 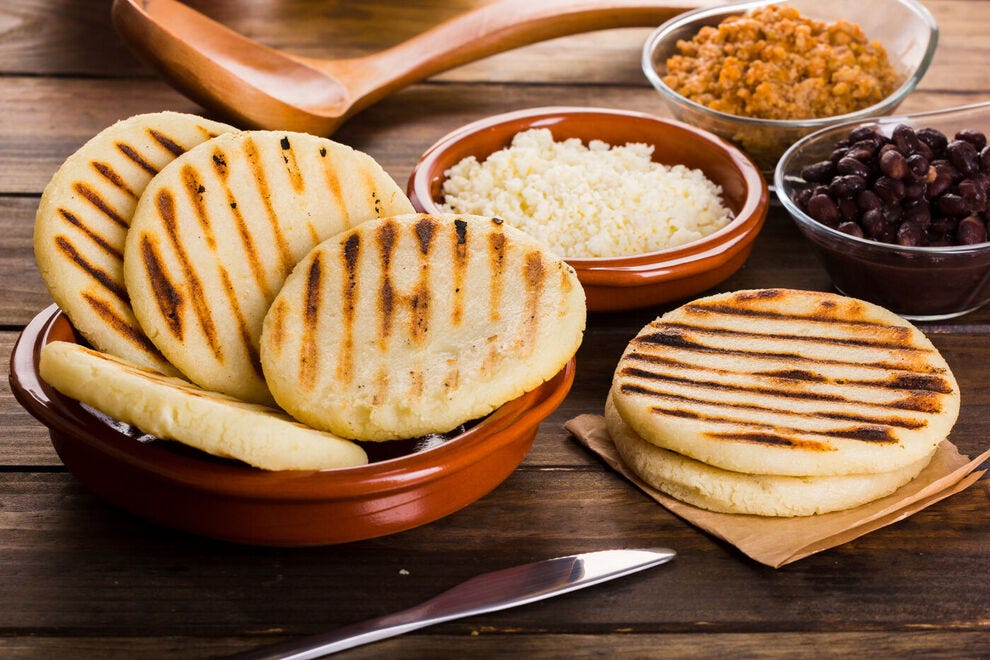 Arepas are a staple in certain Latin American breakfasts, such as the one pictured here — Photo courtesy of iStock / nehopelon

These thick corn cakes – often made from a flour called masa – look a bit like English muffins, though they have a heavier weight and a heartier mouthfeel. The maize patties can be boiled, baked, fried or steamed, but the version found in many stateside restaurants is grilled atop an open flame or commercial kitchen flat top range.

You can enjoy arepas all on their own (common throughout Colombia), but why would you ever want to when they are available sliced and stuffed with everything from shrimp to cheese? 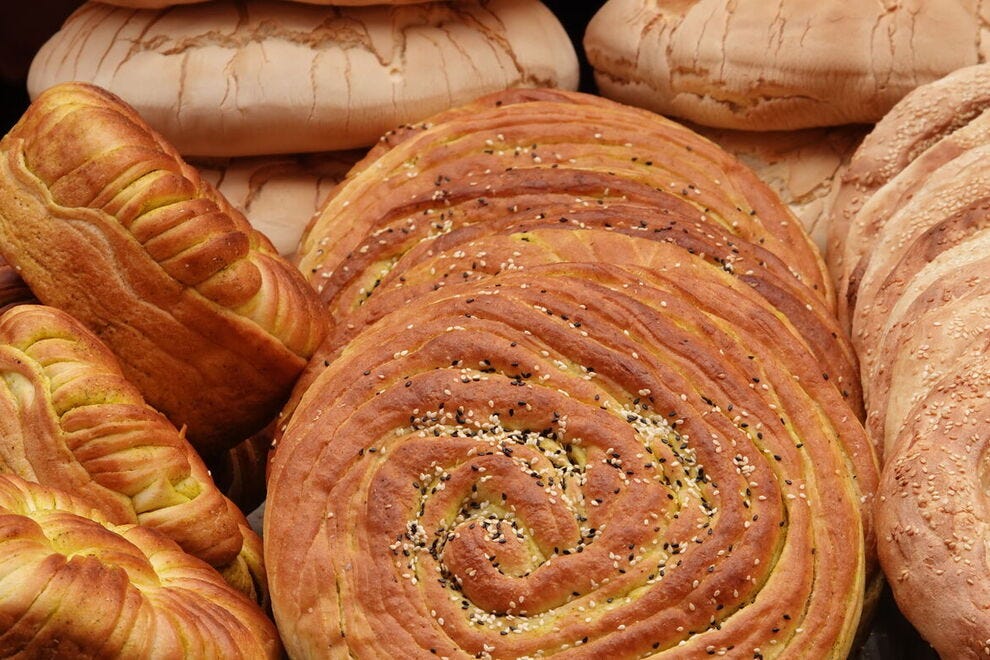 A selection of Chinese baked goods, including shaobing — Photo courtesy of iStock / Wheatfield

Bing is something of a bread catch-all term in China, where pizza and crepes are known as pisa bing and keli bing, respectively. Tortillas in China effortlessly win the name game, though, where they go by the name Mexican thin bing. Bing are generally thin, versatile, wheat flour rounds that play host to stuffings like Peking duck. 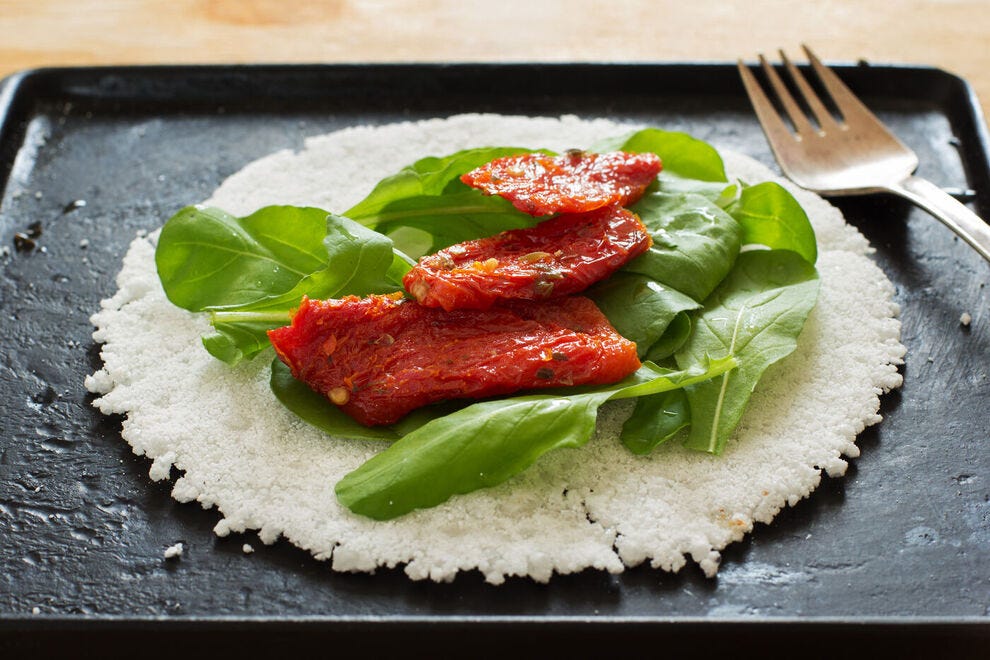 Much of the Caribbean world’s bread is consumed each day in the form of casabe, a flatbread formed from the pulpy paste of ground cassava root. Once the poison – yes, poison – is worked out of the plant, the dough is baked in thin, metal trays until it takes on the crisp consistency of a cracker.

Though the casabe is cooked until it is hard and dry, a liquid is usually sprinkled atop each piece of bread prior to chowing down. 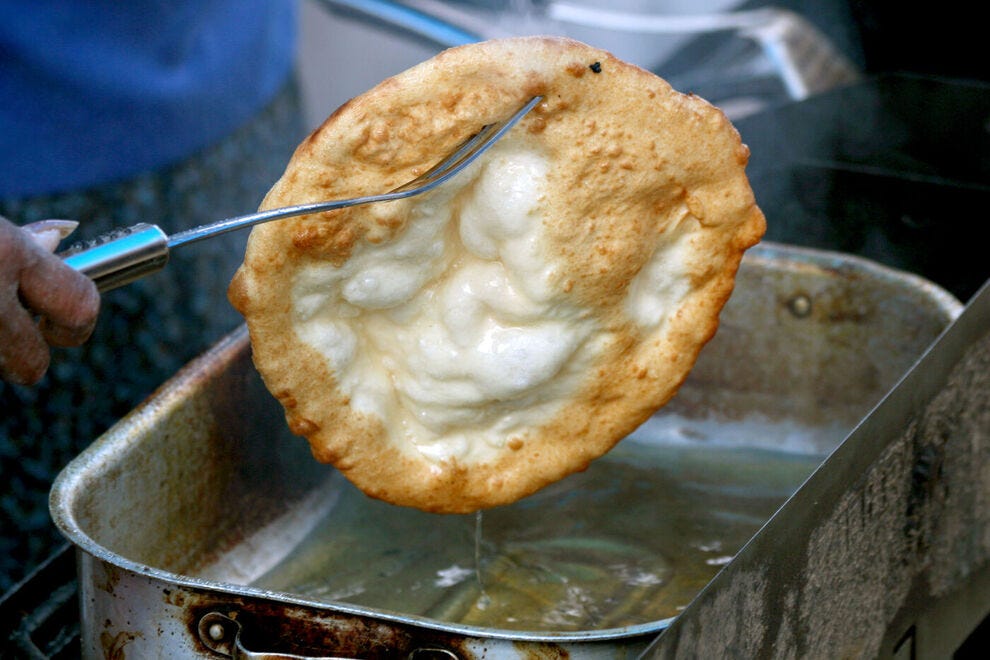 Though various recipes can call for the addition of yogurt or mayonnaise, all you really need are flour, water, salt, baking powder and oil to whip up a round of frybread. In some traditional Native American households, frybread dough is made early in the mornings and then left to leaven, with portions pulled off throughout the day to make bread when needed.

You can top frybread with just about anything that you would find in a taco, and many Midwestern state fairs also offer up powdered sugar-dusted takes on the classic.

Another classic combination of flour, water and salt, goraasa is cooked atop special circular wok-like pans until thin patties are formed. Goraasa can be snacked upon all on its own, but it is frequently paired with dama, a dish comparable to beef chili, flavored with tomato paste, cinnamon and cardamom. 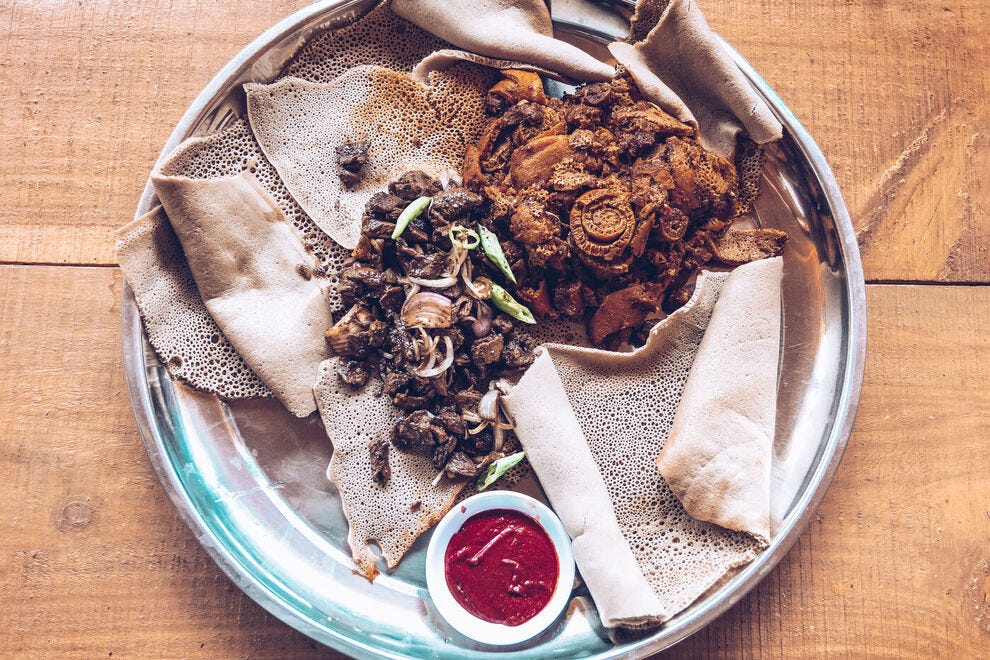 This thin sourdough flatbread has a spongy texture to it, thanks to the teff flour used in its preparation. One side of the bread is perfectly flat, due to the griddle it is cooked upon, while the uncooked side remains porous. This gives enormous sheets of injera an almost honeycomb-like look.

Rich stews are often served with this bread, which is then torn into pieces to pluck and scoop the hearty toppings. 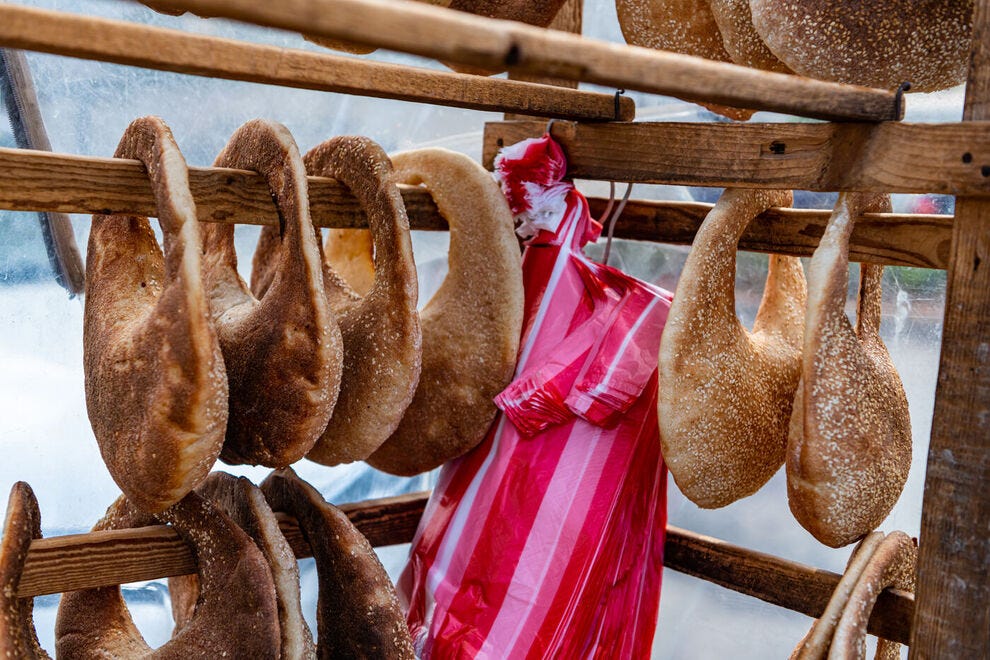 Kaak sometimes goes by the name patthar ki roti, meaning “stone bread,” due to the flat slabs of stone the dough is rolled atop before baking in a tannur oven. In some families, the various steps of the breadmaking are performed by differing generations living under the same roof, with one person handing off the dough to the next along the way.

In Pakistan, crispy kaak is closely associated with sajji, a chicken or lamb dish marinated in papaya paste and stuffed with rice. 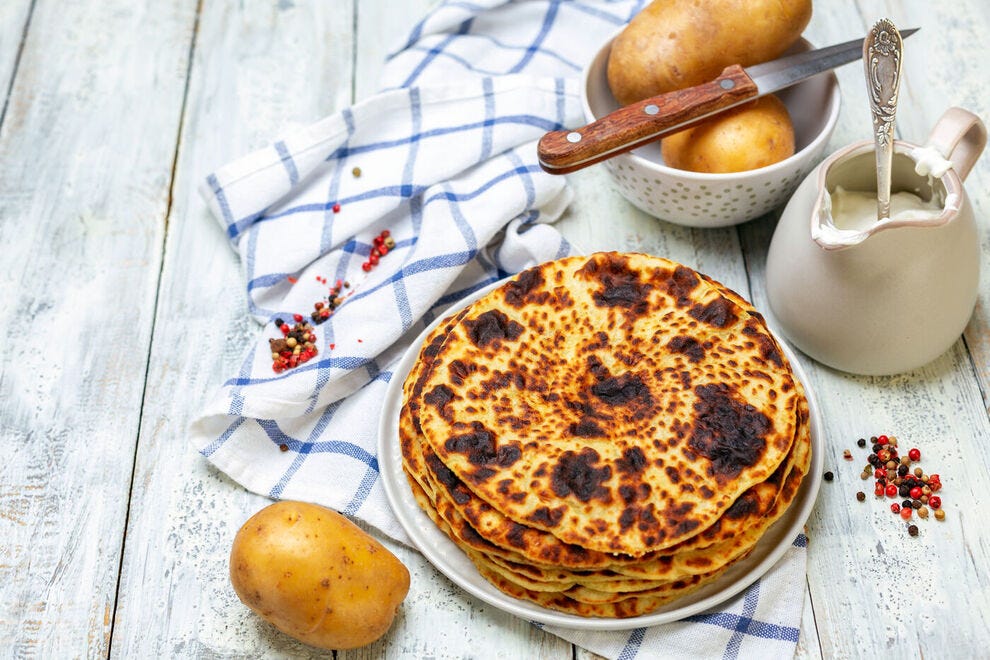 If you couldn’t tell from the tubers next to them, these homemade lefse were made with the traditional potatoes — Photo courtesy of iStock / SMarina

The bread of Scandinavian winter holidays, lefse throws a monkey wrench into the classic flatbread recipe in the form of the potato. In Norway, it’s not unusual for the bread to be made with egg yolk and buttermilk instead.

Online booking firm BookIt settles with customers for $550,000, while other cases linger