Shoppers can shave minutes off their time at the supermarket checkout by following one woman’s time-saving trick.

The hack, which was shared in the popular Australian Facebook group Aldi Mums by a member named Ez, simply involves sorting different varieties of fruit and vegetables into separate plastic bags.

Ez said she has noticed customers mixing similar produce such as white and yellow peaches and red and green capsicums in the same bag, despite the items having different price codes.

She said this forces the cashier to separate the items to scan them individually, wasting time and holding up the queue for those behind. 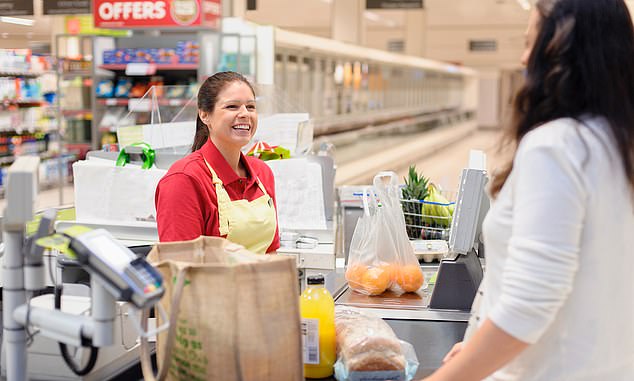 The advice has been praised by supermarket workers, with many calling it a common and ‘frustrating’ problem.

‘Just a little tip to make your fruit and veg a bit easier for the register staff,’ Ez wrote on the Aldi Mums page.

‘Separate colours of fruit such as peaches and nectarines, as well as red and green capsicums. Even if they’re the same price, they’re not the same item and require different inputs.

‘This will save your tied up produce bag from potentially being ripped open to separate the fruit.’

The tip sparked some passionate responses, with one woman replying: ‘As a cashier in a supermarket, thank you for this.’

She added: ‘Yes zucchinis and Lebanese cucumbers need different bags, yes peaches and nectarines need separate bags and yes I know what fennel is you don’t need to tell me before I scan it!’

A second woman who used to work at Woolworths said it was ‘so frustrating’ when customers placed different produce in the same bag.

‘I understand they are probably trying to save the use of plastic and all, but the operators are the ones that have to pull it all out, separate, weigh and scan and out back in. It’s really a pain in the a***,’ she wrote.

But many argued the advice is so blatantly obvious that it’s not a hack at all.

‘Why would anyone chuck everything into the same bag when it’s clearly different? They weigh each of the items separately to determine price,’ one woman wrote.

‘Unless people are trying to get away paying less, as the attendant picks the cheaper item but they run the risk of attendants picking the more expensive item.

‘It’s common sense that each item will be separate.’

However a former cashier insisted it’s surprising how frequently this happens.

‘I used to work at a supermarket, happens all the time,’ she said.

‘”Oh but it’s the same price”. Sorry Susan, they have different codes so need to go in separately for stock control purposes.’