The mass arrests were made earlier this month as part of a three-year collaboration between Australian Federal Police and the FBI.

Murder plots, weapon deals and drug trafficking were discussed by alleged criminal figures on an encrypted online app that had been set up by police.

Crime figures including Comanchero ­bikies and senior mafia kingpins used the app, secretly developed by the FBI, to message associates around the world, unaware everything they said and did was being intercepted by the FBI and AFP. 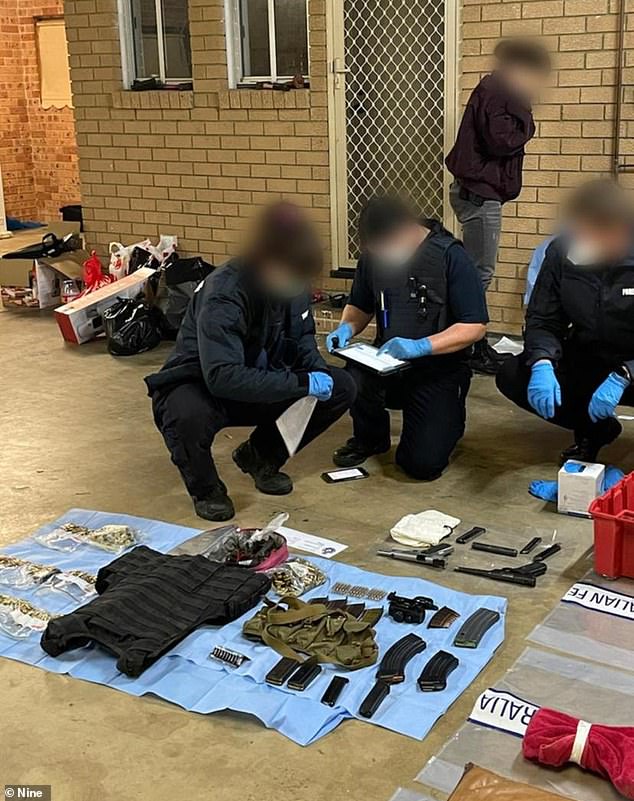 Murder plots, weapon deals and drug trafficking were discussed by alleged criminal figures on an encrypted online app that had been set up by police 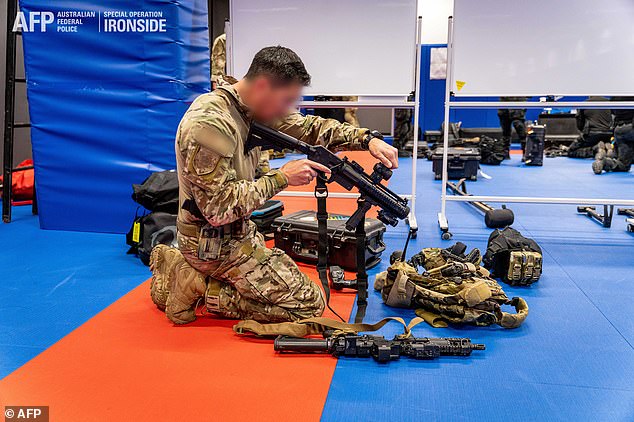 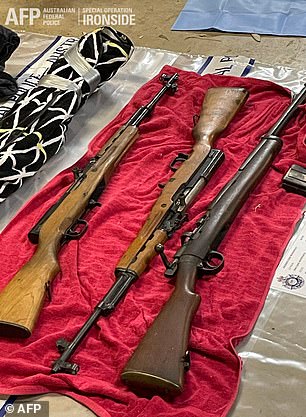 One hundred and four weapons were seized across the span of the operation. Some of the guns which were found are pictured above 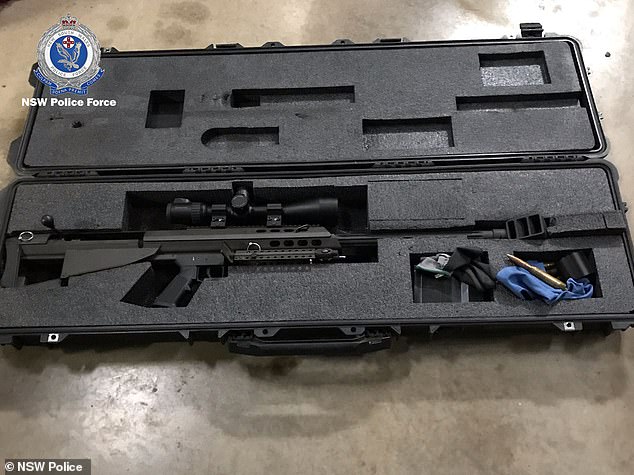 This highly powered gun can reportedly shoot up to two kilometres away, and was discovered during the raids

One of the murder plots involved a scheme to kill a crime figure at a Melbourne kickboxing tournament, though the intended target isn’t known, The Herald Sun reported.

Investigators said the plan was close to going ahead before they swooped on the alleged would-be killers and found two stolen cars with cloned number plates to be used in the murder.

Victoria Police arrested a man and seized a gun.

Victoria Police Assistant Commissioner Bob Hill said 21 ‘threats to life’ were thwarted in the state as a result of the Operation Ironside covert monitoring.

Police said the Comancheros were responsible for executing two innocent young men, Muhamed Yucel and Zabi Ezedyar, by mistake in May 2017. 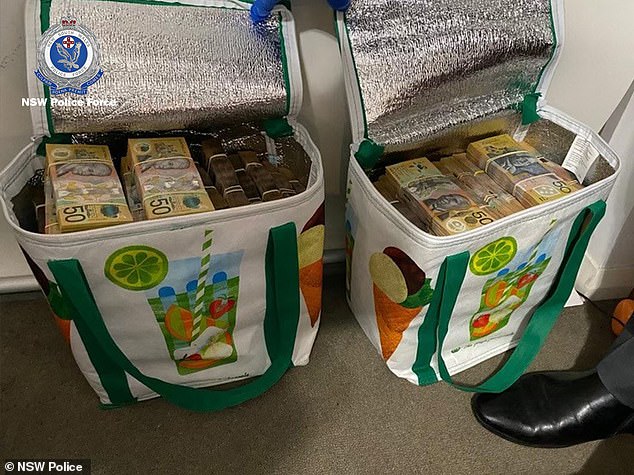 Woolworths bags full of wads of wash were also seized during the raids, which involved 4,000 officers on Monday and Tuesday 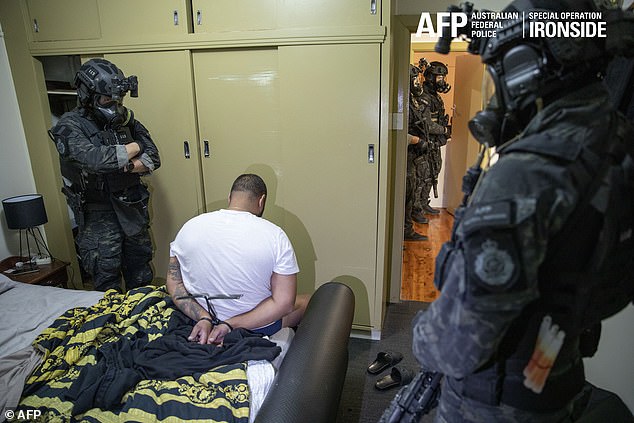 Pictured: one man accused of participating in the syndicate sits on his bed after being raided by AFP officers

The AFP last Tuesday said it seized 3.7 tonnes of drugs, 104 weapons, and almost $45 million in cash as part of the operation.

The alleged criminals were linked to the Australian arm of the ‘Ndrangheta, the branch of Italian mafia based in Calabria, as well as outlaw motorcycle gangs, Asian crime syndicates, and Albanian organised crime figures.

‘The operation puts Australia at the forefront of the fight against criminals who peddle in human misery and ultimately, it will keep our communities and Australians safe,’ he said on Tuesday. 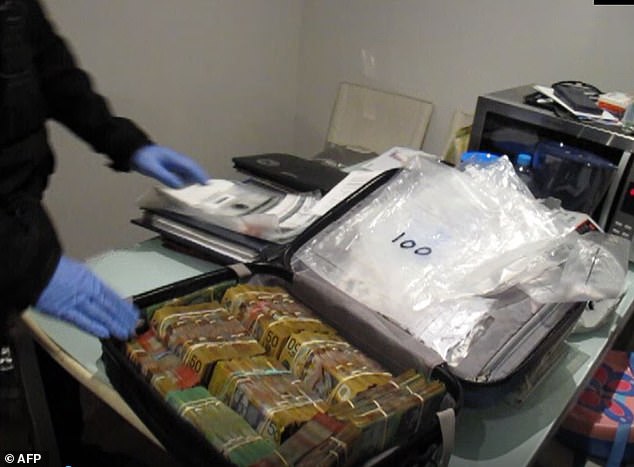 The AFP last Tuesday said it seized 3.7 tonnes of drugs, 104 weapons, and almost $45 million in cash as part of the operation 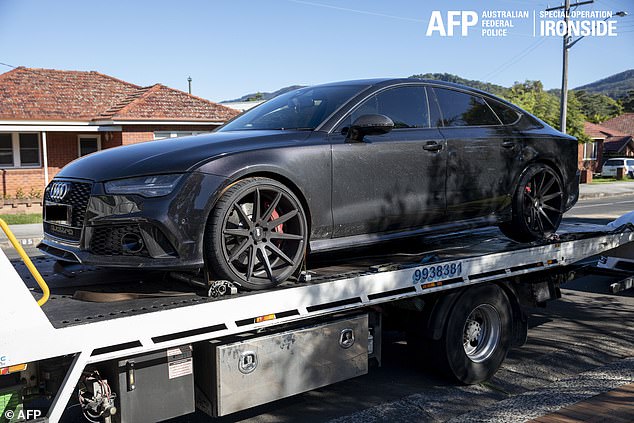 A luxury Audi sedan seized by the AFP as part of their joint investigation with the U.S. FBI 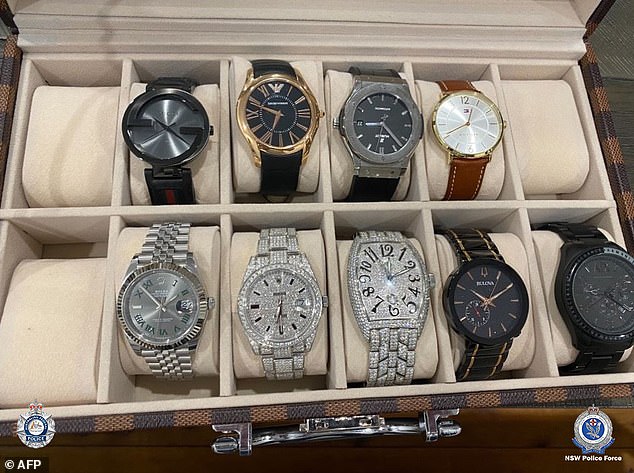 AFP Commissioner Reece Kershaw said federal agents had been in the ‘back pockets’ of criminals through the encryption app.

‘The FBI had the lead on this. We provided the technical capability to decrypt those messages,’ he said.

‘Some of the best ideas come over a couple of beers.’

Ninja Warrior 2017 contestant Sopiea Kong was among those arrested. The 33-year-old was charged last week following a raid at a Kangaroo Point home, where police allegedly seized 154g of meth.

Kong, who was also allegedly in possession of $2,030 cash and a revolver, was granted bail and will appear in court on June 28.

Former Bachelorette star Samuel Minkin, who appeared on Becky and Elly Miles’ season of the dating show, was charged with possessing a large commercial quantity of cannabis after police stopped a van in Byron Bay last month.