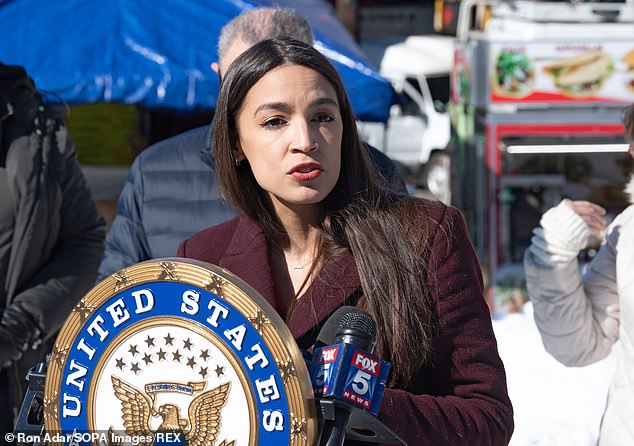 
Alexandria Ocasio-Cortez has been told to ‘stay in New York’ by critics over her plan to visit storm-hit Texas after she raised $2million to pay for emergency supplies.

The New York congresswoman flew out to Houston on Friday to meet fellow Democratic congresswoman Sylvia Garcia after a whirlwind of fundraising over just 48 hours.

But she did not receive a universal welcome, with Twitter user Karen Jean writing: ‘Pure pandering, You have no empathy for anyone but yourself. Stay in New York, don’t those people need your ”help” too?’

However, allies praised AOC and contrasted her behaviour to Texas Senator Ted Cruz‘s much criticized decision to fly out to Cancun on Wednesday with his wife, Heidi, and their two daughters, rather than stay at home to help his constituents.

‘Beth’ tweeted: ‘AOC doing more for Texans than @SenTedCruz! It seems she understands government of the people, by the people and FOR the people.’

Cruz returned back to Texas on Thursday following anger that he was abandoning his home state at its time of crisis, as GOP allies and right-wing commentators leapt to his defense.

AOC announced her trip at around midday EST on Friday, tweeting: ‘We’ve now raised $2 MILLION in relief for Texans & are adding more orgs.

She added in a second tweet: ”Charity isn’t a replacement for good governance, but we won’t turn away from helping people in need when things hit the fan.

‘People understand that now is the time for collective action and doing what we can w/ whatever we’ve got. Thank you y Pa’lante!’

Later, she announced that she was visiting the Houston food bank with her Democratic colleague and appealed for donations.

AOC’s trip was met with a mixed reaction, with some thanking her for helping out while others questioned whether her time would be better spent helping her needy constituents in New York.

Twitter user Randy Phelps wrote: ‘I thought @AOC was one of 435 house members, not from TX, but with a district in NY. Are there really no cold and needy constituents there for you to serve, where today it is near freezing with snow?’

Pamela Cash tweeted: ‘We’ve got this. Things are almost back to normal. Thanks for the help, but don’t bother coming down here. Texas doesn’t need or want you here.’

Another critic wrote: ‘She should concern herself with the astronomical death toll of elderly people in her state due to that states failed policies in handling Covid.

‘What happened here pales in comparison to the amount of death in New York nursing homes.’

AOC was told by critics to ‘stay out of Texas’, while other people welcomed her support at a time of crisis

Trey Florance was more blunt, writing: ‘Stay out of Texas. We don’t want you here.’

Meanwhile, Karen Jean tweeted: ‘Pure pandering. You have no empathy for anyone but yourself. Stay in New York. Don’t those people need your ”help” too.’

Texans have seen electric bills surge as high as $17,000 after two powerful storms knocked out power and caused a 300-fold surge in demand – as 14million people struggle to get clean water in a ‘health catastrophe’.

While most Texans are on a fixed rate plan on which they pay the same monthly amount throughout the duration of their contract, some are on a variable or indexed plan which sees rates vary based on the market.

One of these customers, Ty Williams, told WFAA-TV that his combined electric bill last month for his home, guest house, and office was $660.

Meanwhile, temperatures as low as -2F have burst many of the state’s water pipes, leaving residents forced to scrape snow off the walls to boil to make it safe for cooking and drinking.

As the Lone Star state remained in the grip of crisis and dozens died from hypothermia, Senator Cruz’s wife Heidi have been pictured enjoying the sea, sand and sunshine on the Mexican beaches of Cancun.

Photos taken on Friday showed appearing to be enjoying drinks with friends while her husband was forced to return to Texas to face the music.

Cruz enraged his state by fleeing in the midst of the worst snow storms to hit Texas in decades, with the power failing for millions, and people left freezing in the sub-zero temperatures.

The lawmaker claimed that his 10 and 12-year-old daughters asked him on Wednesday if they go could go on vacation to Mexico with their friends, so he and his wife boarded a plane hours later.

‘It was obviously a mistake and in hindsight I wouldn’t have done it,’ he said, speaking on arrival at home in Houston. ‘I was trying to be a dad.

‘And all of us have made decisions… when you’ve got two girls who have been cold for two days, and haven’t had heat or power, and they are saying: ‘Look, we don’t have school, why don’t we go, let’s get out of here.’

‘I think there are a lot of parents that’d be like, if I can do this, great.’

Subscribers with Griddy, the Houston-based wholesale energy company, have been billed thousands of dollars due to a spike in demand

Speaking to Fox News’ Sean Hannity on Thursday night Cruz said: ‘So last night I flew down with [my daughters] to the beach and then I flew back this afternoon.

‘I had initially planned to stay through the weekend.

‘But as I was heading down there, you know, I started to have second thoughts almost immediately because the crisis here in Texas, you need to be here on the ground.’

Cruz is seen checking into his return flight home to Texas at Cancun International Airport in Cancun, Mexico on Thursday. He told Hannity that he initially planned to return on Saturday