Arlene Foster felt ‘humiliated’ after Embarrassing Bodies star Dr Christian Jessen tweeted a rumour she was having an affair, a libel court heard today, as she revealed she gets ‘very distressed’ when people call her homophobic.

Northern Ireland‘s First Minister was quizzed on her views during proceedings against the celebrity doctor who posted unsubstantiated rumours of her having a fling on social media.

Dr Jessen’s tweet, on December 23 2019, referred to Mrs Foster as ‘the sanctity of marriage preaching woman’, adding: ‘It always comes back to bite them on the a**e in the end.’

The DUP had in the past opposed attempts to allow same-sex marriage in Northern Ireland.

It was extended to the region following legislation at Westminster while Stormont was suspended.

The DUP opposed same-sex marriage on religious grounds, arguing that marriage should be between a man and a woman and that civil partnerships were already available to same-sex couples.

Mrs Foster, who leads the party, was asked during proceedings at the High Court in Belfast if she took the ‘traditional view of marriage’ that it is a union between a man and a woman.

‘Yes, I take the traditional view, the church-based view, yes,’ she responded.

Asked if she was homophobic, Mrs Foster responded ‘no’.

Mr Justice McAlinden said there is a ‘big difference between holding strong religious views about the sanctity of marriage between a man and a woman and having an irrational hatred of homosexuals’.

Mrs Foster agreed: ‘There is, absolutely. I get very distressed when people do actually call me a homophobe because that’s something I am not.

‘I do think, unfortunately, in politics sometimes, if you take a nuanced position on one issue it becomes a much wider piece, and that’s unfortunately the case – if you cannot explain it in 140 characters in today’s society then it must be true – it is simply not true.

‘I have never in my own political utterances said anything in connection with people who are homosexual and that’s why I do get quite upset when people call me a homophobe.’

Mrs Foster also told the court how she felt the rumour of an affair with a close protection officer, which she described as having emerged online from anonymous accounts before the tweet by Dr Jessen, was designed to destabilise her at a critical time, as she was involved in talks to resurrect the powersharing government in the region.

‘It was meant to destabilise me and thereby destabilise the negotiations as well,’ she said.

‘I have no proof of that, but I just think the timing of it is very significant given when it came.’

Mrs Foster said she had to sit down with their two elder children, then aged 17 and 19, to talk to them about it, as well as her elderly mother, then aged 85, and assure them the rumour was not true, adding: ‘It was not a conversation that I would like to repeat.’

Asked how she felt about it, she replied: ‘Very very upset.

‘Having to speak to my husband and explain to him what had happened, because this gentleman has a large following, so this was going to go quite far and wide,’ she added.

‘It was very humiliating, I have to say, to see that the relationship that is most important to me had been trashed, if you like, and got put out there in the public domain in that fashion.

‘There wasn’t much sleep on the night of December 23. I spoke to my husband and we decided we needed to take action because this was only going to continue to grow.

‘I therefore contacted my solicitor and asked him to take action in relation to the matter.’ 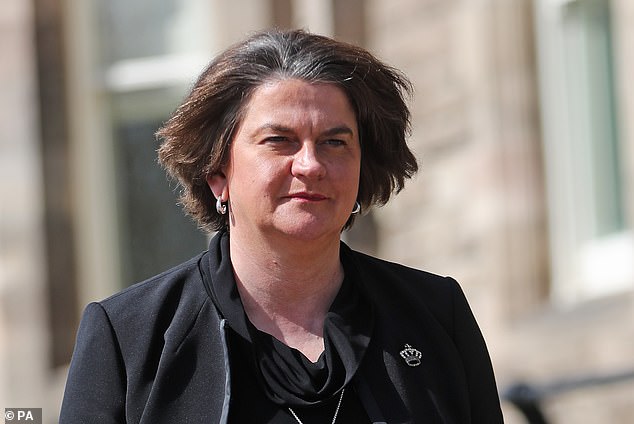 She said her church minister was approached by a journalist to ask if they had attended the Christmas Day service together, and had they appeared together.

‘Those closest to me of course knew that it wasn’t true, but they were asked questions by other people,’ she said.

‘As a woman in politics and as a leader, we come under a lot of stress and strain but one of the things that gives me stability is my home relationships, and it was almost as if this cut to the very core of my life.’

The court heard that Dr Jessen responded to a tweet by solicitor Paul Tweed on December 24, putting him on notice about the content of the tweet, with the short form ‘lol’, which means ‘laughing out loud’.

He then responded to an email from the solicitor on January 7 and removed the tweet.

The court heard there was a ‘further aggravating tweet’ on December 26 in which Dr Jessen wrote he was being compared to Barbra Streisand, saying: ‘this gay boys life cannot get any better’, which was accompanied by exclamation marks and a number of emojis.

This was described by Mrs Foster’s legal team as a ‘sneering tweet’.

However, Dr Jessen has not responded to correspondence since, the court heard.

Mrs Foster said the lack of acknowledgement from Dr Jessen was upsetting.

‘I don’t know Dr Jessen so I don’t know why he took that view, it’s very upsetting because it almost continues the validation of what he said, that he decided to keep it up on social media for a period of time and even when he took it down there was no acknowledgement of wrong-doing,’ he said.

Speaking about the contact with Dr Jessen, David Ringland QC, acting for Mrs Foster, told the court: ‘I suspected he had more service than anybody in the history in these courts in terms of the number and manner of service.

‘In terms of the service of each of these steps, the same approach has been taken by the defendant as he has taken to every aspect of this case, in other words, head in the sand, completely ignoring, not responding.’

Dr Jessen, best known for his work on Channel 4’s Embarrassing Bodies, was described in court as a medical doctor who practises as a GP on Harley Street in London. He has 311,000 followers on Twitter.

His initial tweet on December 23 was retweeted more than 500 times, as well as prompting a thread of discussion described in court as ‘pretty unpleasant’, before it was deleted.

Mr Ringland said: ‘We are talking about huge publication in this case.’

Mr Justice McAlinden said he will produce a written judgment on the matter.

‘Obviously I am going to have to reserve my decision in this case and given a written judgment,’ he said.

‘I will try to get that dealt with as quickly as possible because I think that this has been hanging over Mrs Foster for long enough and the defendant’s approach to this matter has extended the time during which it is hanging over her head, so I will attempt to deal with this matter as a matter of urgency, but it will take some time to ensure that I deal with it properly.

‘I will give a written decision as soon as possible.’

Bukayo Saka: Why ‘mesmeric’ teenager could be future Arsenal captain