Arsenal suffers a major blow without Xhaka injured for 8 weeks 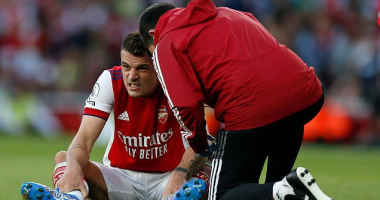 Arsenal coach Mikel Arteta suffered a painful blow after his recent victory over Tottenham, 3-1 in the London derby, in the sixth round of the English Premier League, at the Emirates Stadium.

And according to the British newspaper, “Football London”, that the Swiss star Granit Xhaka, will miss Arsenal for a period ranging from 6 to 8 weeks, due to his suffering from a knee injury, which he suffered during the derby match last Sunday.

The newspaper added that Xhaka, the Arsenal midfielder, suffers from a strong injury to the inner ligament of the right knee, which leads to his absence from the Gunners for a long time.

The injury of Granit Xhaka, the Arsenal midfielder, is a strong blow to the artillery coach, Mikel Arteta, especially as he is one of the main elements in the formation of the Gunners.

The Arsenal team managed to win during the last two rounds against Burnley and Tottenham, after 4 consecutive defeats in the English Premier League this season 2021-2022.

Arsenal jumped to the tenth place in the English Premier League table, with 9 points, after winning 6 points against Burnley and Tottenham.

Who said that vitamin C is only for treating cold.. “You won’t believe its many benefits”

Who said that vitamin C is only for treating cold.. "You won't believe its many benefits"