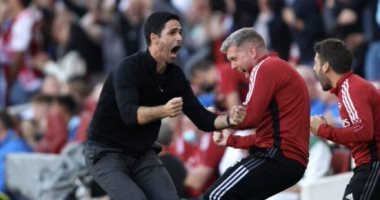 Arsenal coach Mikel Arteta confirmed that his team’s first half against Tottenham today is the best for the Gunners ever this season, after the Gunners finished 3-0 in their favour.

The Gunners defeated their neighbors, Tottenham, 3-1, during the match that brought the two teams together this evening, Sunday, at the “Emirates” Stadium, the Gunners’ stronghold in the north London derby, at the top of the sixth round of the English Premier League competition.

“In the first half we played probably one of the best games I’ve seen this season,” Arteta said during his post-match remarks. “I’m proud of the way we’re playing, proud that we can give something to the fans.”

On the injury of Granit Xhaka, midfielder, Arteta said, “I am very worried because it does not look very positive at the moment.”

And Arteta sent a message to Arsenal fans, saying, “Thank you for encouraging this wonderful environment for the team you planted in them. This victory is for you to enjoy tonight.”