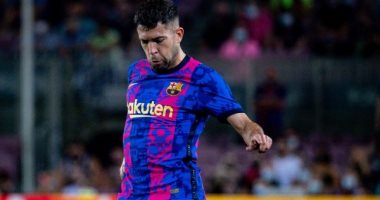 Barcelona announced the injury of its left-back Jordi Alba during the match against Bayern Munich, which ended with the Bavarian team winning 3-0, in the confrontation that brought the two teams together at the Camp Nou, in the first round of Group E in the Champions League for the current season. 2021 / 2022.

“Jordi Alba suffers from hamstring pain,” Barcelona said on its Twitter account. “Further tests are pending to determine the exact extent of the discomfort.”

The Barca defender was replaced in the 74th minute of the match, and the young player Alex Balde entered in his place.

Summary and goals of the Barcelona match against Bayern Munich in the Champions League .. Video

Summary and goals of the match Malmo vs Juventus in the Champions League .. Video

Summary and goals of the match Malmo vs Juventus in the Champions League .. Video