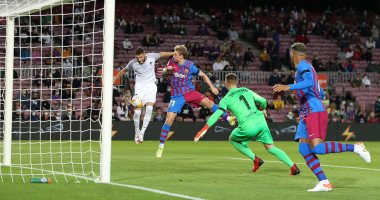 The Spanish team Barcelona kidnapped a fatal draw against its guest Granada, with a goal for each, in the confrontation that took place between them this evening, Monday, at the “Camp Nou” stadium, as part of the fifth round of the Spanish League competition “La Liga” for the current season 2021-2022.

Domingos Duarte scored Granada’s lead in the 2nd minute of the match, the fastest goal for the Andalusian team against Barcelona, ​​which came after 85 seconds, since Ramon Aziz’s goal on September 21, 2019 after 93 seconds.

Then Ronald Aruajo scored the equalizer for Barcelona in the last minute of the match.

Duarte’s goal is the fastest goal Barcelona has conceded at home in the Spanish League since Fernando Torres’ goal with Atletico Madrid in February 2005 (37 seconds).

Duarte also became the second player from Granada to score at the Santiago Bernabeu and Camp Nou in La Liga in the twenty-first century, after Darwin Machias.