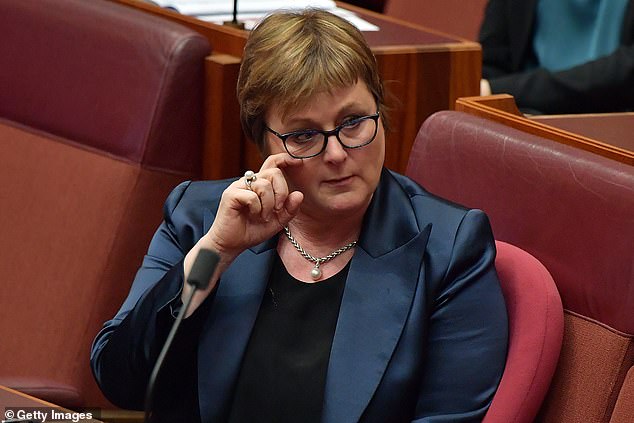 The minister who first heard about the alleged rape of former Liberal staffer Brittany Higgins has broken down in tears in parliament.

Ms Higgins broke her silence this week after allegedly being sexually assaulted by an unnamed government employee in Senator Linda Reynolds’ office in March 2019 after a night out with colleagues.

During question time in the senate on Thursday, Senator Reynolds was asked about Home Affairs Minister Peter Dutton’s community grants.

‘If I could ask, if I could have indulgence, to answer on Monday,’ she said through tears.

‘I think I’d be in a better position to answer on Monday. If you could give me a minute? Can I take it on notice.’

During question time in the senate on Thursday, Senator Reynolds was asked about Home Affairs Minister Peter Dutton’s community grants – which prompted tears about the rape claims

Senator Reynolds’ rare show of emotion comes after Ms Higgins slammed claims the government has been backgrounding journalists in a bid to undermine her and ‘muddy the waters’.

Amid claims the Prime Minister’s Office is briefing reporters in an apparent attempt to smear her now partner, a former public servant, Mr Higgins said if they are true it ‘speaks to the systematic problems of this place’ – and needs to stop.

‘I knew personally that when I decided to put my name and face to this there would be repercussions for me. But I think it’s unfair if they are starting to try and take this out on loved ones,’ Ms Higgins told Guardian Australia.

‘It silences people and I think it’s gross.’

Network 10 political editor Peter Van Onselen claimed on ABC radio on Thursday the PMO ‘has been backgrounding that her partner, her now partner, has a vendetta, or a gripe might be the better way to put it, against the government because of him being a former public servant’.

Mr Van Onselen took to Twitter to claim the backgrounding was being carried out ‘in a bid to muddy the waters’. Daily Mail Australia contacted the Prime Minister’s Office for comment.

Ms Higgins – who was 24 when she was allegedly raped – released a statement late on Wednesday blasting Prime Minister Scott Morrison for what she described as his ‘victim blaming’ rhetoric.

‘I have only been made aware of key elements of my own sexual assault as a result of coming forward publicly with my story,’ Ms Higgins said.

Ms Higgins is reportedly planning to pursue her rape allegation with authorities. She told Network Ten she initially decided not to pursue a police complaint as she felt her job was on the line.

In October 2019 – when Ms Higgins was working under Employment Minister Michaelia Cash – a media request was made to Ms Reynolds’ office asking for more information about the rape allegations.

As the two politicians’ staffers scrambled to come up with a response to the press inquiry, Senator Cash called Ms Higgins to reassure her the situation was ‘under control’.

‘Brittany, it’s Michaelia. Just checking up on you – you looked absolutely gorgeous on Saturday,’ she said in the 30 second-long message obtained by news.com.au.

‘I really hope you had a lovely time at the Federal Council. Hoping everything is OK.

‘Look, Daniel has got everything under control. I promise you. And just remember. We are with you every step of the way. OK? Sleep tight. I’ll see you tomorrow. Bye.’

Defence Minister Linda Reynolds (left) told the Senate this week that the staffer had been ‘terminated’ following a ‘security breach’. Until recently Ms Higgins worked for Employment Minister Michaela Cash (together in Parliament’s Great Hall on right)

Senator Cash has denied knowing about the alleged sexual assault until this year, saying until then all she knew of was an incident happened in Ms Higgins’ previous role that she wanted to keep secret.

‘At the end of January this year, Ms Higgins advised the Minister and COS that the March 2019 matter had become an issue and that she wished to resign and leave Canberra,’ a spokesman for the senator said.

Mr Morrison has apologised for Ms Higgins’ treatment and has asked his department’s secretary to lead a review of the complaints process.

‘The government regrets in any way if Ms Higgins felt unsupported through this process,’ a statement published earlier this week said.

The Liberal staffer accused of raping Ms Higgins has since checked himself into hospital.

The staffer – who hasn’t been charged or investigated by police – reportedly left his home on Sydney’s north shore on Wednesday evening to seek psychiatric care.

The Daily Telegraph reported that he was not suicidal, but was concerned with his mental state.

Ms Higgins’ alleged assailant left Canberra for Sydney following the incident with Minister Reynolds telling Parliament he was ‘terminated’ because of a ‘security breach’.

During a tearful interview with The Project on Monday, Ms Higgins claimed that her alleged attacker had landed ‘a good job’ in Sydney and ‘just kind of got to keep going.’

Daily Mail Australia understands he now works for a major multinational. The former policy hand also recently deactivated his Twitter account where he used to rail about politics.

Egypt .. Downfall of those accused of killing a former official and his wife during dawn prayers