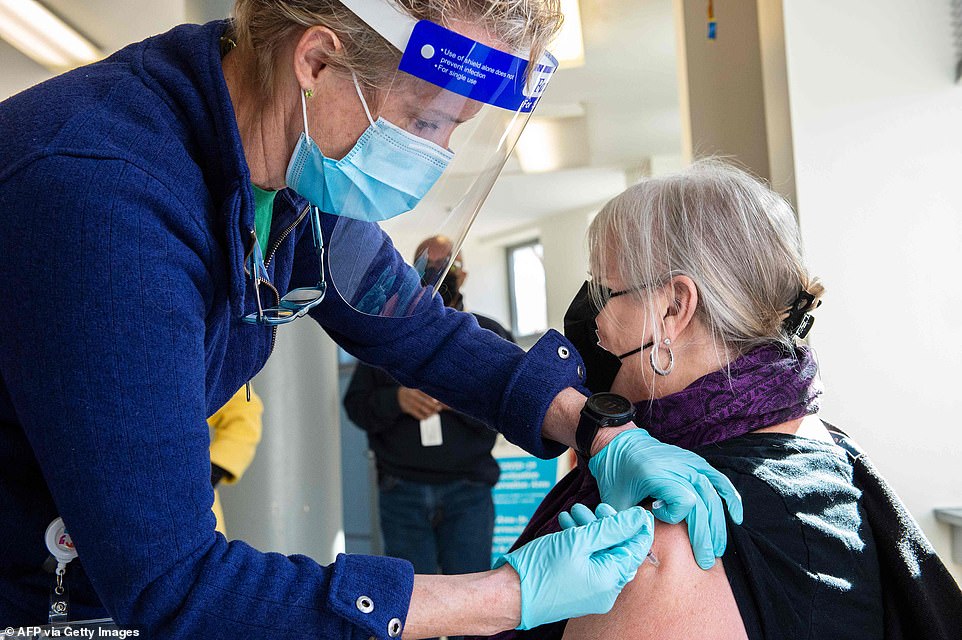 China has been spreading doubts about the safety of Pfizer‘s Covid-19 vaccine and suggested that the virus originated in an American military laboratory.

Beijing’s cynical propaganda campaign comes after the recent arrival of World Health Organisation investigators in Wuhan to probe the origins of coronavirus.

As the Pfizer jab is rolled out across the world, the Chinese Communist has filled the airwaves with stories about people dying suddenly after having the US drug company’s vaccine.

On social media, the hashtag ‘American’s Ft. Detrick,’ started by the Communist Youth League, was viewed 1.4 billion times in the last week after Beijing called for a WHO probe into the biological weapons lab in Maryland.

Beijing’s claim follows an intelligence dump from Washington this month which said workers at the Wuhan Institute of Virology fell ill with ‘symptoms consistent with COVID-19’ in the fall of 2019.

Two soldiers stand guard February 25, 2002 at the main gate of Fort Detrick in Frederick, Maryland, where the U.S. Army Medical Research Institute of Infections Diseases is located. The facility has hosted much of the US biological defense program, also known as the National Biodefense Strategy

The Trump administration pressed the WHO to fully investigate the laboratory, saying that the Chinese had withheld vital information about the virus since the first outbreak.

While China’s fringe theories may raise eyebrows abroad, they have a captive domestic audience.

‘It’s purpose is to shift the blame from mishandling by (the) Chinese government in the pandemic’s early days to conspiracy by the U.S.,’ said Fang Shimin, a now-U.S.-based writer known for exposing faked degrees and other fraud in Chinese science. ‘The tactic is quite successful because of widespread anti-American sentiment in China.’

Yuan Zeng, an expert on Chinese media at the University of Leeds in Great Britain, said the government’s stories spread so widely that even well-educated Chinese friends have asked her whether they might be true.

Inflaming doubts and spreading conspiracy theories might add to public health risks as governments try to dispel unease about vaccines, she said, saying: ‘That is super, super dangerous.’

In the latest volley, state media called for an investigation into the deaths of 23 elderly people in Norway after they received the Pfizer vaccine. An anchor at CGTN, the English-language station of state broadcaster CCTV, and the Global Times newspaper accused Western media of ignoring the news.

Health experts say deaths unrelated to the vaccine are possible during mass vaccination campaigns, and a WHO panel has concluded that the vaccine did not play a ‘contributory role’ in the Norway deaths.

The state media coverage followed a report by researchers in Brazil who found the effectiveness of a Chinese vaccine lower than previously announced. Researchers initially said Sinovac’s vaccine is 78% effective, but the scientists revised that to 50.4% after including mildly symptomatic cases.

After the Brazil news, researchers at the Australian Strategic Policy Institute, a government-supported think tank, reported seeing an increase in Chinese media disinformation about vaccines.

Dozens of online articles on popular health and science blogs and elsewhere have explored questions about the effectiveness of the Pfizer vaccine at length, drawing on an op-ed published this month in the British Medical Journal that raised questions about its clinical trial data.

While China enjoys its Covid recovery and trumpets its success, a growing body of evidence suggests it covered up the early spread of the disease – allowing it to balloon into a pandemic while robbing other nations of the ability to properly respond

China’s GDP grew by 2.3 per cent in 2020, making it the only major economy likely to record economic growth in the year of the pandemic

‘It’s very embarrassing’ for the government, Fang said in an email. As a result, China is trying to raise doubts about the Pfizer vaccine to save face and promote its vaccines, he said.

Senior Chinese government officials have not been shy in voicing concerns about the mRNA vaccines developed by Western drug companies. They use a newer technology than the more traditional approach of the Chinese vaccines currently in use.

In December, the director of the Chinese Centers for Disease Control, Gao Fu, said he can’t rule out negative side effects from the mRNA vaccines. Noting this is the first time they are being given to healthy people, he said, ‘there are safety concerns.’

The arrival of the WHO mission has brought back persistent criticism that China allowed the virus to spread globally by reacting too slowly in the beginning, even reprimanding doctors who tried to warn the public. The visiting researchers will begin field work this week after being released from a 14-day quarantine.

The Communist Party sees the WHO investigation as a political risk because it focuses attention on China’s response, said Jacob Wallis, a senior analyst at the Australian Strategic Policy Institute.

The party wants to ‘distract domestic and international audiences by pre-emptively distorting the narrative on where responsibility lies for the emergence of COVID-19,’ Wallis said.

Foreign Ministry spokeswoman Hua Chunying got the ball rolling last week by calling for the WHO investigation of the U.S. military lab. The site had been mentioned previously by CGTN and other state-controlled outlets.

‘If America respects the truth, then please open up Ft. Detrick and make public more information about the 200 or more bio-labs outside of the U.S., and please allow the WHO expert group to go to the U.S. to investigate the origins,’ Hua said.

Her comments, publicized by state media, became one of the most popular topics on Sina Weibo.

China isn’t the only government to point fingers. Former President Donald Trump, trying to deflect blame for his government’s handling of the pandemic, said last year he had seen evidence the virus came from a Wuhan laboratory. While that theory has not been definitively ruled out, many experts think it is unlikely.

HOW DOES CHINA AND THE US’S OFFICIAL TIMELINE COMPARE TO LATER SCIENTIFIC EVIDENCE?

THE OFFICIAL TIMELINE OF CORONAVIRUS SPREADING FROM CHINA

The WHO China Country Office was informed of cases of pneumonia of unknown cause detected in Wuhan City, Hubei Province of China. Around 27 suspected cases were reported in the month of December.

A man in his 30s developed symptoms of the virus after returning from a trip to Wuhan.

California became the second U.S. state to report a case of coronavirus in a traveler who returned to Illinois.

January 30 2020: CDC reports first case of person-to-person spread in the US.

Officials confirmed a case of coronavirus in a person who had not traveled to Wuhan but shared a house with someone who had been diagnosed with the virus.

March 1 2020: New York City reports the first case in the city and state

A woman returning to New York from Iran is identified to be the state’s first case of coronavirus.

Three people in Wisconsin become the states first coronavirus cases after they traveled to Europe.

A Rhode Island traveler who returned from Italy in mid-February is confirmed to have coronavirus.

WHAT WE KNOW NOW ABOUT THE SPREAD OF CORONAVIRUS FROM CHINA

Unpublished government documents obtained by the South China Morning Post in March showed 266 people had contracted coronavirus by the end of 2019.

The earliest of them was a 55-year-old woman, identified on November 17 – weeks before China first began to sound the alarm.

December 13-17 2019: Blood donors from California, Oregon and Washington had antibodies to coronavirus

January 2020: Genome sequencing of viral strains in New York City suggests that coronavirus was already in New York by January, and came mostly from Europe

Northeastern University modeling suggested that there were probably more than 10,000 infections in the city already.

An analysis by the New York Times suggested that there were likely 28,000 additional cases in five major cities, which had collectively reported just 23 infections.

The Chinese government was reporting about half as many cases a day as were on its confidential list.

However, even greater transparency would not likely have stopped coronavirus from becoming a global pandemic.

December 1 2020: The one year anniversary of the first symptoms reported in Wuhan

More than 63.6 million people, including 13.6 Americans, have been infected with coronavirus worldwide.

Oxfam: It may take more than a decade for the world’s poorest people to recover from the Coronavirus