This shocking footage shows the moment a man on an e-scooter attempted to join traffic on a motorway.

Police were stunned to see the rider, who was travelling at around 15 miles per hour, speeding towards cars going 70mph on the M606 in Bradford.

Fortunately, West Yorkshire Police were able to catch up with him and seize the scooter before an accident happened.

Officers shared the video of the rider on Twitter, reminding users that privately owned e-scooters cannot be legally used on a public road or pavement.

‘Officers on patrol were shocked to see this e-scooter on the chevrons trying to join a live motorway lane with 70mph traffic,’ the tweet read.

‘Privately-owned e-scooters cannot legally be used on a public road or pavement and only on private land.’

UK law states that riders can only use e-scooters on private land if they have permission from the landowner.

Riding them in public is an offence because they don’t always have visible rear lights, number plates or the ability to signal.

E-scooters are subject to the same laws and regulations as motor vehicles, meaning they come under the same legal requirements including MOT and tax.

The Government are running trials across England which allow members of the public to rent an e-scooter in cities including Liverpool, Newcastle, Canterbury and parts of London.

E-scooters are available to rent in Ealing, Kensington and Chelsea, Richmond upon Thames and Hammersmith and Fulham. 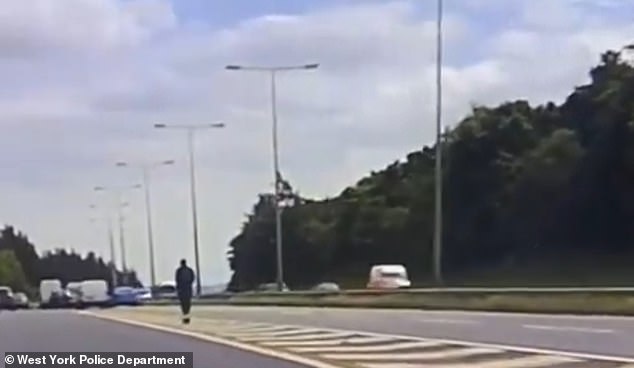 Riding e-scooters on public roads is an offence because they do not have visible rear lights, number plates and do not have the ability to signal like normal vehicles 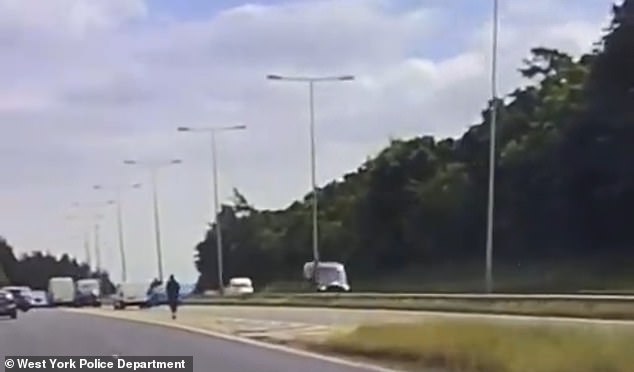 Scooters can also be hired in Canary Wharf, while the City of London borough is due to join the scheme next month.

It’s part of a bid to create ‘go slow areas’ in the city to increase safety.

As they are classed as vehicles, riders can get points on their license for breaking road rules such as running red lights, drink driving and using their mobile phones as they ride.